Heating up – the race for the 2020 KHL playoffs

The regular season is on the final lap – and for most of the 24 teams in the KHL, that means a battle for position in the playoffs.

As January comes towards its end, our teams have about 12 games each left to play and so far not one club is mathematically out of the running for a top-eight finish. True, there are teams whose chances are so remote as to be unrealistic: in the Western Conference Dinamo Minsk and Dinamo Riga would need an unprecedented upswing in form, winning all their remaining games while hoping that at least one of Torpedo, Vityaz or Lokomotiv failed to pick up more than one point. Nonetheless, with little over one month until the end of the regular season, there’s plenty of playoff intrigue to look forward to in the coming weeks.

Salavat Yulaev and Metallurg Magnitogorsk have a proud record. Neither team has missed a KHL playoff in the 11 seasons since the league was founded. But this time around, both teams are in danger with Admiral and Neftekhimik ready to pounce on any slip-up in the run-in.

Magnitka, currently eighth in the East, has just a three-point advantage over ninth-placed Admiral as it goes into Friday’s game at Torpedo. A slow start to the campaign cost head coach Josef Jandac his job and put Ilya Vorobyov back behind the bench in Magnitogorsk. Last time that happened, in 2015/16, Vorobyov was promoted from within to take over from Mike Keenan – and went on to lift the Gagarin Cup. This time, though, Vorobyov came from outside the locker room and he has found it harder to find the winning formula. Metallurg has more losses than wins this season (26 vs 23) and has struggled to put together a streak that can lift it up the table to a more comfortable position. 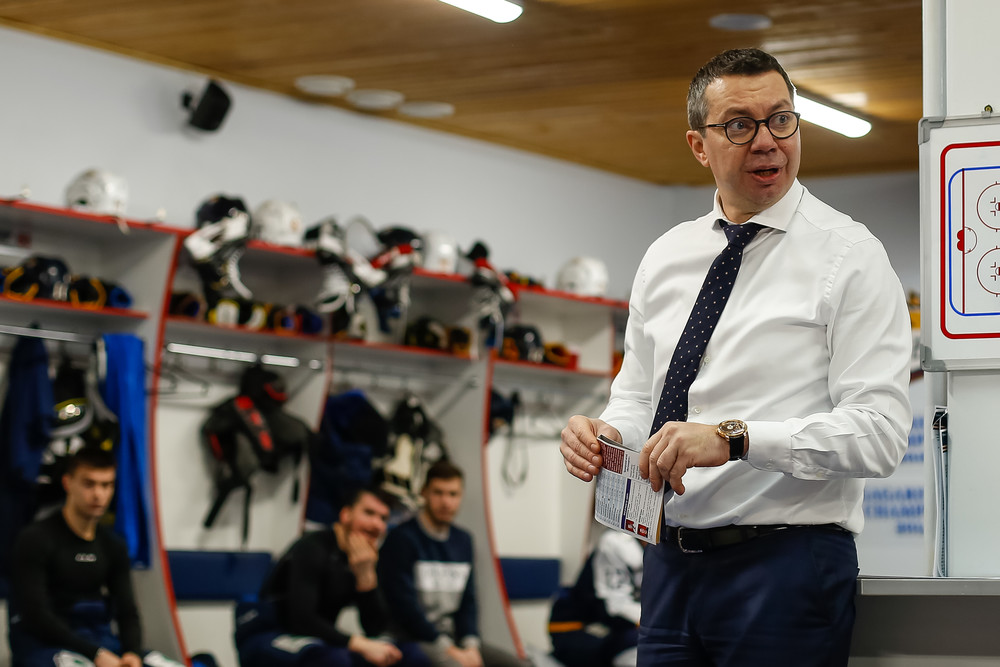 In Ufa, meanwhile, Nikolai Tsulygin is in a familiar situation. Last season, too, Salavat Yulaev failed to impress in the regular season. Eventually the team finished in sixth in the East, but rarely defeated the league’s top teams. Today, the pride of Bashkortostan is in seventh place with 55 points from 50 games. That’s five better than Admiral, having played a game more. While the team’s top line – Omark-Soshnikov-Hartikainen – has been prolific once again, there hasn’t always been a lot of scoring depth. And defensively, only Philip Larsen’s 28 points have made a significantly contribution from the blue line. Last season, Tsulygin made his reputation as a coach by steering his team to the Conference final; this season he is still unsure of a place in post season. 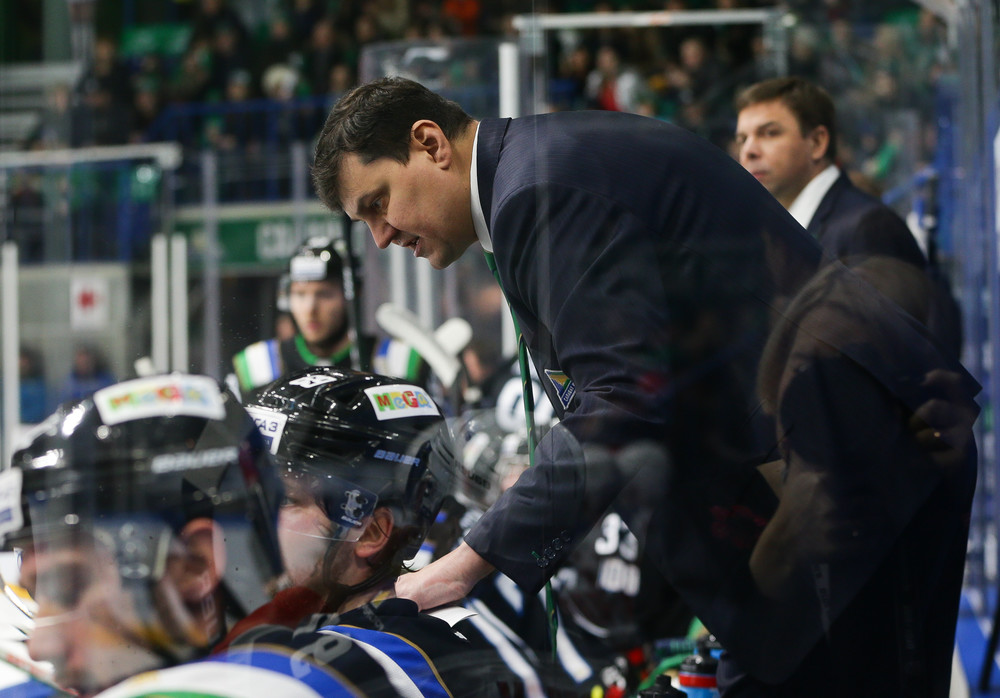 Another big question from the East – will Kunlun Red Star make the playoffs for only the second time in the club’s history? The Chinese franchise is currently sixth in the Eastern Conference and enjoys a seven-point lead over Admiral in ninth. Curt Fraser’s team has 25 wins in total this season, just three fewer than the 28 victories in its debut season and significantly more than either of the past two campaigns. Mid-season acquisitions Devante Smith-Pelly and Hunter Shinkaruk have started to contribute to the offense and a current three-game winning streak means there’s plenty of confidence around the organization.

However, there remains one concern. The Dragons have played 53 games so far, more than any other team in the league. Admiral, the team trying to close the gap, has four games in hand worth potentially eight points – enough to close that gap. However, the Sailors are on a skid, having lost their last four games, and the team has been hampered by the loss of injured goalie Juha Olkinuora. With the Eastern Conference so tight this season, there are sure to be more twists and turns before the deal is done. 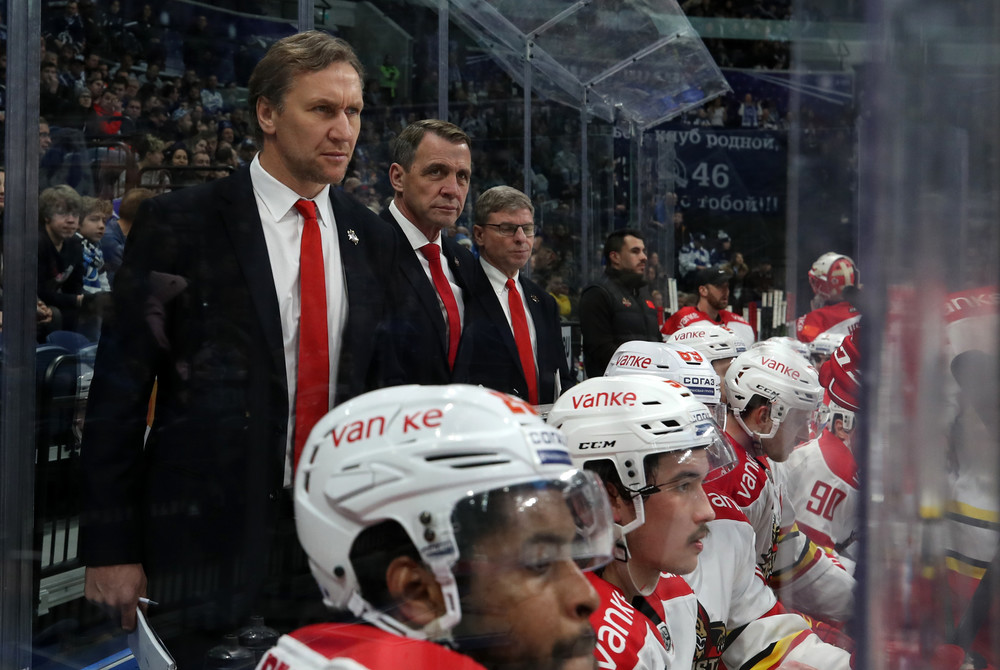 The battle to finish top of the Eastern Conference is also going all the way. There’s no doubt that Ak Bars and Avangard will clinch their playoff spots in due course, but the 2018 champion and the 2019 finalist are in a showdown to secure first place.

Currently the teams are level on points, with Ak Bars leading by virtue of one more win in regulation. Dmitry Kvartalnov’s team also has two games in hand on Bob Hartley’s boys. However, the teams still have to meet twice – on Feb. 11 and Feb. 18 – and those key clashes look set to be decisive. 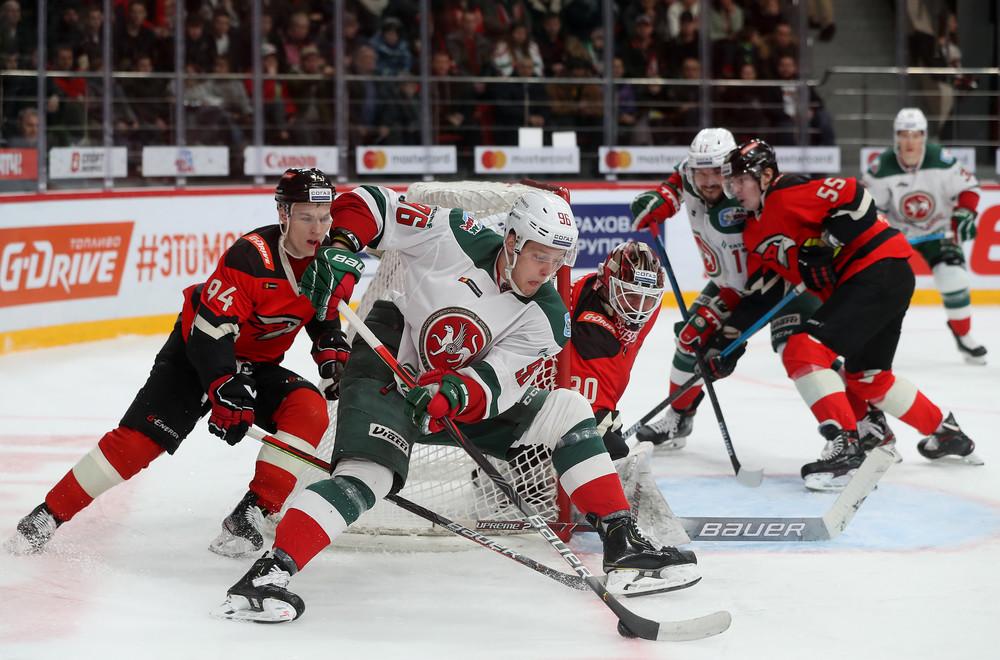 Two through in the West

In the West, two teams have already booked their playoff places. To nobody’s great surprise, CSKA and SKA are out in front once again and the Army Clubs are already mathematically assured of a top eight finish.

Even the race to be crowned regular season champion seems fairly clear. CSKA, which won everything last season, is seven points clear of SKA. The teams will meet once more on Feb. 25 in Moscow, but Igor Nikitin has maintained his advantage in head-to-head match-ups with SKA, winning four out of five games so far this season. He seems set to lead the Muscovites to the top of the table for the fifth time in six seasons. 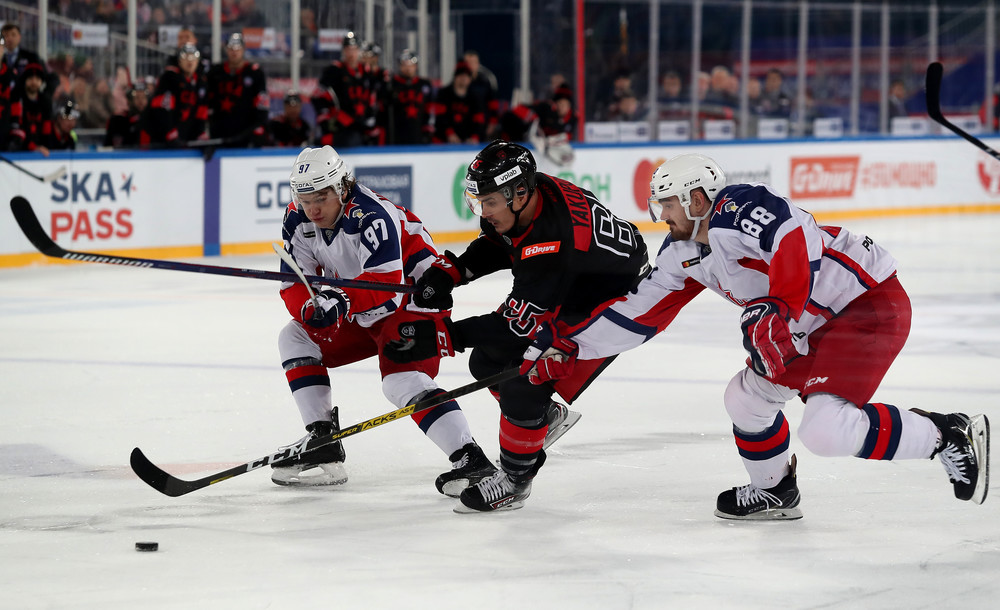 If the race to secure a playoff place in the East is a battle for several teams, in the West it looks like the current top eight are likely to progress. HC Sochi is the closest challenger, but the ninth-placed Leopards are eight points adrift and have played a game more than their closest rivals. Severstal, similarly, are one place and two points further back. With just one victory in its last four games, Sochi shows few signs of producing the kind of form needed to turn that around – but there is still a glimmer of hope in the struggles at Lokomotiv, currently on a four-game losing streak in eighth place. 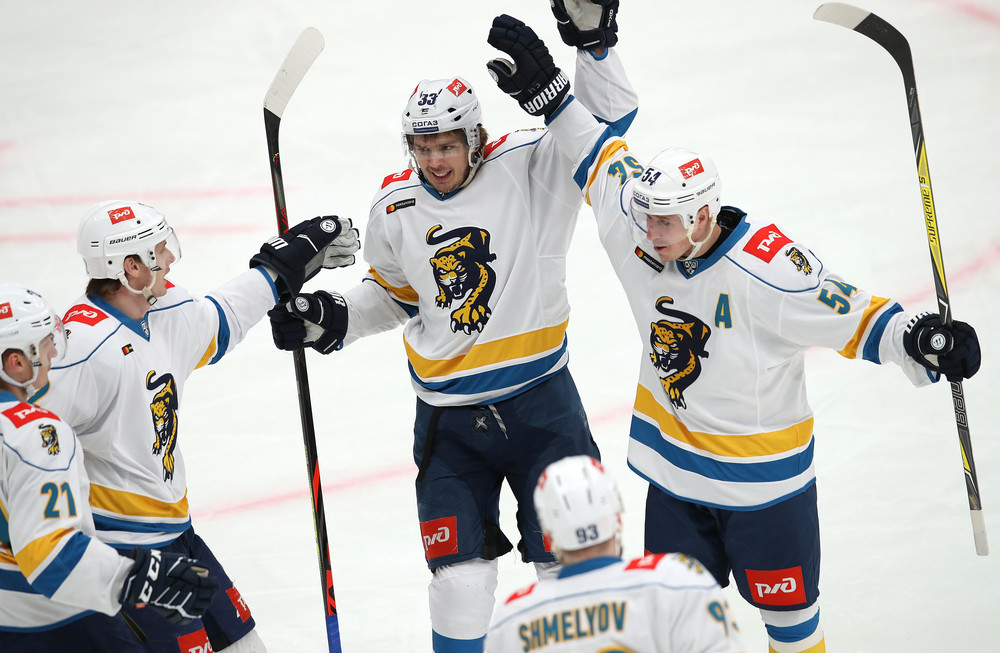 Loko is one of three clubs level on 56 points going into Friday’s program. The Railwaymen, along with Vityaz and Torpedo, face a three-way fight to secure sixth place. Why does it matter? Well, seventh and eighth will face daunting first-round opposition in the form of CSKA and SKA, who seem destined to occupy the top two spots. But the team in sixth will get a series against one of Dynamo Moscow, Jokerit or Spartak. All three are dangerous opponents, but all three have shown this season that they can be beaten.

At present, Torpedo leads the way thanks to its 19 wins in regulation and David Nemirovsky’s team can build on that advantage tonight when it takes on Metallurg in Nizhny Novgorod. There’s also a key fixture coming up on Jan. 30 when Torpedo goes to Yaroslavl to face Lokomotiv. However, three further defining games will see Loko face Vityaz in the run-in. The teams meet tomorrow in Podolsk, with the visitor eager to end that four-game skid, before renewing hostilities again in Yaroslavl on Feb. 18 and back in Podolsk on Feb. 25. 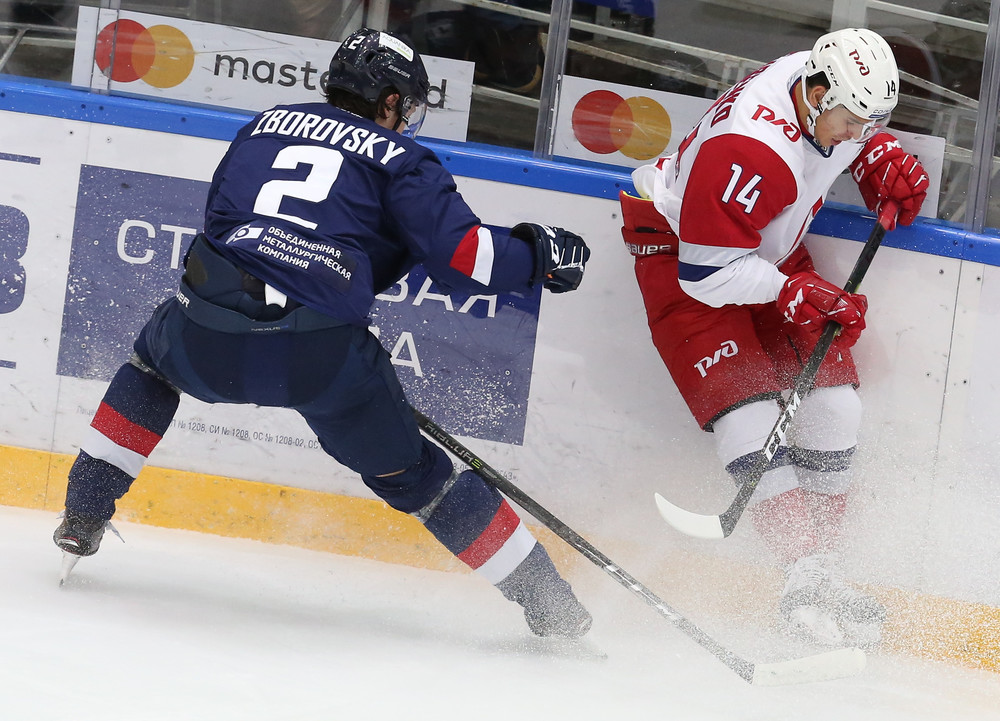 If the playoffs were tomorrow

Based on the current league table, the first-round playoff pairs would currently be as follows: