The top talents of Russia’s Women’s Hockey League took center stage on Sunday at the All-Star Game in Moscow. An international galaxy of female talent strutted its stuff in front of a big crowd at the VTB Arena, with more than 3,000 people coming to watch the battle between East and West as part of the FONBET All-Star Week 2020.

The day was intended to showcase the rise of the women’s game in recent seasons, following the Women’s Hockey League’s move under the KHL’s umbrella – and a combination of top-class action on the ice and a full-scale show to keep the fans entertained highlighted just what the girls have to offer.

Team East skated to victory in the game, winning 4-1 to tie the overall series against the Western Conference at two wins apiece, with Yekaterina Dobrodeyeva (East) and Valeriya Merkusheva (West) selected as the top players of the game.

In addition to the game, the players also took part in a penalty shot contest during the first intermission. This event, reminiscent of one of the highlights of the men’s Skill Show, generated some of the most eye-catching moments of the day. Alena Mills made her first attempt from the seat of a bicycle, then returned dressed as legendary Czech forward Jaromir Jagr to take a shot in the style of the former Avangard star. Xueting Qi, one of the stars of the KRS Vanke Rays team, tried using two sticks on her attempt, but the blue liner was unable to find the net. However, her Rays team-mate Kimberly Newell had more success; the Canadian goalie changed roles with Alevtina Shtaryova and scored for herself during the contest.

But the winning attempt came from Dynamo St. Petersburg’s Polina Bolgareva. She enlisted a band of her team-mates to kidnap goalie Anna Prugova before shooting a blazing puck into the net.

There was more excitement in the second break as the teams held a sharp-shooting contest. Fanuza Kadirova of SK Gorny was the quickest to fire home her four attempts on target. 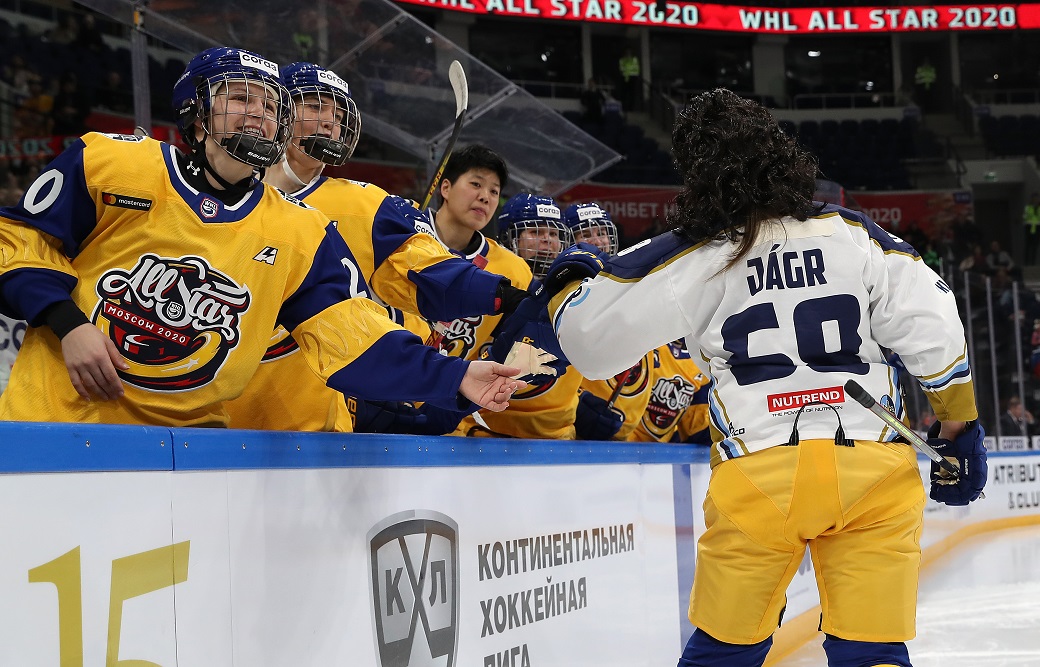 The Battle on the Ice

The first period saw the two starting goalies, Prugova and Merkusheva, take the spotlight. For a long time, neither team could solve the pair. It wasn’t until late in the opening frame that Dobrodeyeva opened the scoring. Early in the second period, Dobrodeyeva turned provider as her Biryusa team-mate Valeriya Pavlova doubled the lead. At the other end, Prugova left the ice midway through the game without allowing a single goal.

In the third, team West captain Anna Shokhina got her team on the scoresheet at last. However, her effort was sandwiched between two more markers for the East. Yekaterina Lebedeva and Rachel Llanes secured a 4-1 margin.

The day ended with the traditional dance-off in center ice as the teams got together to perform the Macarena. 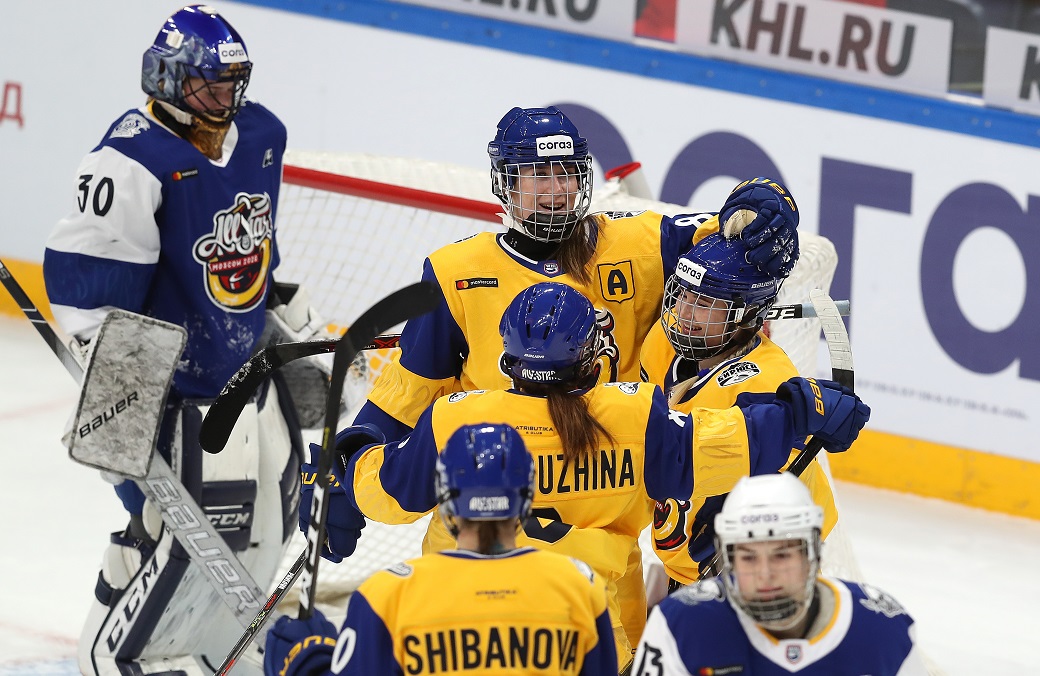 "I thought it was an unbelievable event. Everything was first class; the professionalism, the way the players were treated. For me it was nice to get to know different players and coaches. And seeing the number of international players in the game, coming from China, Slovakia, the Czech Republic, the USA and Russia, made it special. It was a great event.

It’s always fun to win, to get those bragging rights and everything else. The kids played hard and it was a fun game to be a part of. Just experiencing and event like this, being a part of it, is special.

It’s a big thing for women’s hockey. It’s an opportunity to see our players at this kind of level and for young players that’s so important. I really tip my hat to the Russian Hockey Federation and the league for putting on and event like this. Young players can see what’s possible and dream of being a part of it one day. I’m very happy to be a part of it today."

"It was a lot of fun, we enjoyed it. We didn’t know what to expect coming in here, but it was a lot of fun. We had a great crowd and we enjoyed ourselves a lot. It’s great to be able to have this in a big city like Moscow and have a lot of people come out. We saw lots of young girls, young hockey players here today. It will help grow the game."

"I enjoyed every moment. It’s something you might not get to experience again so we just stayed in the moment and tried to have fun.

It’s cool to see the growth of women’s hockey here so far. It’s definitely important to showcase the talent for fans in Russia. It’s so much bigger here than in the US it seems. It’s pretty fun to be a part of it. I was surprised about the crowd. Didn’t know how it was going to turn out, but Russia seems to have a good following for women’s hockey.

It’s pretty cool that the KHL has so much influence on the Women’s Hockey League. It’s good to see that type of business model and it definitely makes the women’s side more successful."

"We really wanted to get revenge on the West after last year. The All-Star Game is always a festival, so it’s a great feeling both during and after the game. It wasn’t important whether I got the goals or not, we were happy for everyone who scored; we were a real team out there. It’s nice to be named MVP, it means that the organizers noticed my efforts. And decided to encourage me [laughs]."

"It was a really well-organized event, the spectators and the girls really enjoyed it all. It was a game between two worthy opponents but for us it was hard to win without scoring goals. Our girls tried hard but it didn’t quite come off for them. We had our changes, but never mind. Games like this are all about promoting women’s hockey and helping grow the game. Today the crowd was about the same as at the JHL Challenge Cup yesterday and that proves that fans are interested in women’s hockey and the game is going from strength to strength."

"Of course it’s a bit of a disappointment that we lost; we thought it might be a slightly easier game. It was a warm arena, and that made it a bit harder to play. Things didn’t always work out for us, maybe we were a bit timid at times and didn’t work hard enough on defense. That cost us a couple of goals. It’s a bit different playing in front of a crowd as big as this; when there are so many spectators, it’s easy to get nervous."

"I wouldn’t say the result was the main thing here. The most important thing was to play a good game and there were lots of chances for both teams. The girls did well, we enjoyed ourselves. My favorite moment was one of my saves in the second period; I loved the way the fans reacted when they got behind us. Of course it’s harder to play in the championship. Here there’s not so much pressure to win and it’s more about playing an entertaining game. The penalty shots this year were great fun. All the girls had something original up their sleeves." 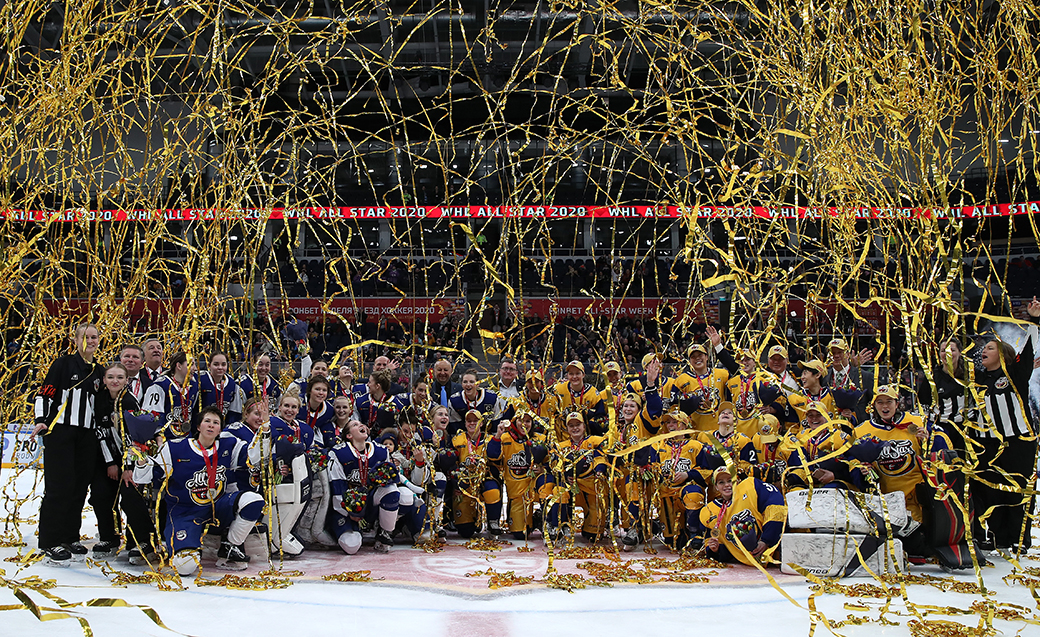