10 years later – a decade after the 1st JHL Challenge Cup

It’s 10 years since the first JHL Challenge Cup took place in St. Petersburg. The show was a hit – more than 7,000 fans came to the Ice Arena to see Team West claim a 6-4 win over Team East. But how many of those spectators would have guessed that they had seen three future Olympic champions take to the ice that day? Or names that would feature in seven future Gagarin Cup triumphs? Here’s a run-down of some of the players who got an early brush with the big time when the Challenge Cup came to town.

Today, it’s hard to imagine that Nikita Gusev was destined for anything other than stardom. A key part of the 2017 Gagarin Cup-winning roster at SKA; an Olympic champion in PyeongChang, where his partnership with Kirill Kaprizov was crucial in winning that gold medal. Now he’s making a solid start to life in the NHL at the Devils.

But back in 2010, aged just 17, Gusev’s future was rather less clear. He made the Challenge Cup team that year, the first of three appearances in the league showcase, but was given few opportunities to make the step up into CSKA’s first team. Over three seasons he played just 39 games for the Army Men in the KHL, producing an underwhelming 5 (3+2) points in that time. Yet, he kept piling up the points for Krasnaya Armiya in the JHL and was a big player for Russia at the World Juniors in 2012. Eventually, his chance came – but the youngster needed to leave his native Moscow and do a tour to Khabarovsk and Khanty-Mansiysk while he learned his trade in the KHL.  Impressive numbers on a struggling Ugra team caught the attention of SKA, and the rest is history. 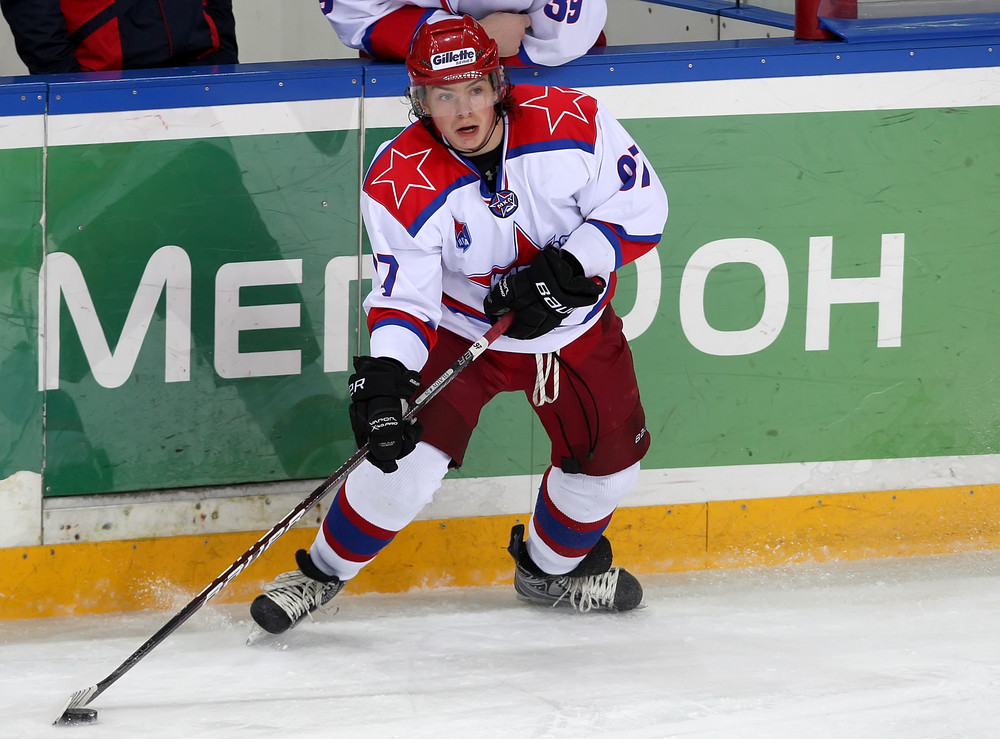 Sergei Kalinin earned his Challenge Cup call on the back of a strong season with Avangard’s junior section, and he even made his KHL debut that season as an 18-year-old. The early part of Kalinin’s career remained in his hometown, and by 2012 he was a regular as Avangard reached the Gagarin Cup final. The following season saw injury slow his progress, but in 2014 he won a unique trophy double when he helped Russia to World Championship gold after helping Avangard lift the short-lived Nadezhda Cup.

The NHL came calling and Kalinin had 121 games in two seasons with the Devils before a trade to Toronto and a drop into the AHL. That – plus the chance to go to the 2018 Olympics – prompted a return to Russia and a productive 2018 under the guidance of Oleg Znarok. Kalinin had a career high 31 KHL points and was part of the golden roster in PyeongChang. A switch to CSKA came in time to bring a Gagarin Cup win last season; Kalinin has gold in World Junior, World Championship, Olympic and KHL hockey. 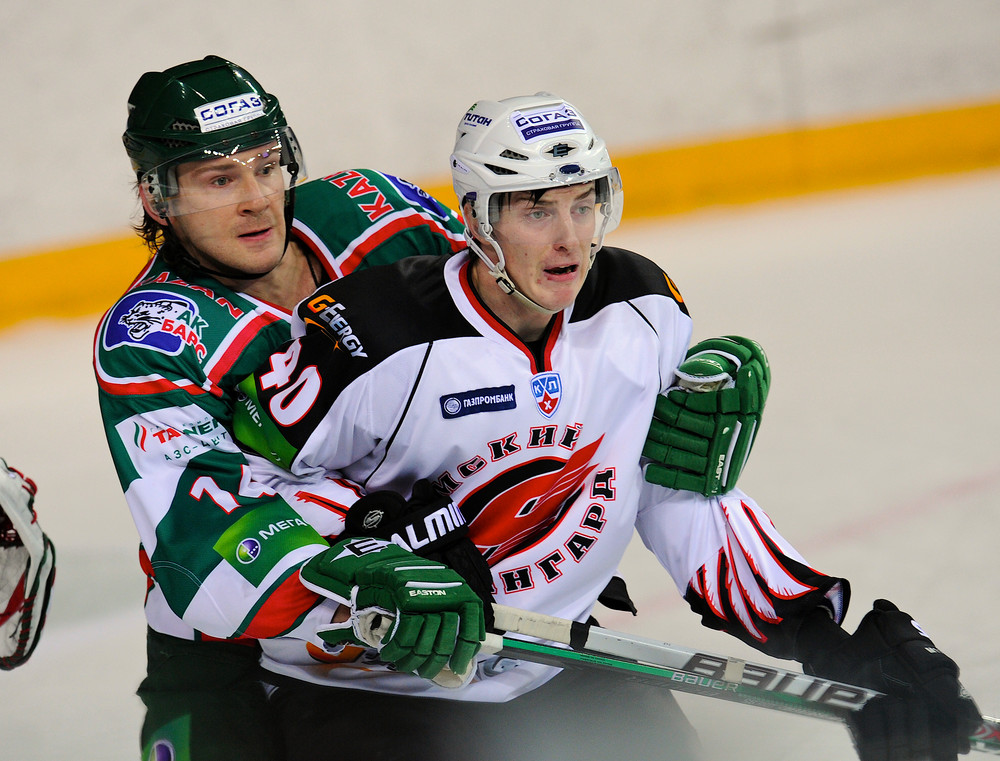 A team-mate of Gusev’s at Krasnaya Armiya, Alexei Marchenko was identified as one of the top defensemen emerging from Russia at the start of the 2010s. In the JHL he was a dominant two-way D-man, and his success at junior level saw him force his way into CSKA’s team. Drafted by the Red Wings, he went to Detroit in 2013 and found himself at the same club as Pavel Datsyuk. NHL opportunities were limited at first, but by 2015/16 he established himself on the blue line for the Wings, making 66 appearances that season for 11 points. However, the following season brought a trade to Toronto and, with thoughts turning to the Olympics, Marchenko opted to return to Russia – and CSKA – for 2017/18.

The decision paid off when Marchenko got a call to Russia’s Olympic roster. In the event, he played just one game in Korea, but nonetheless collected a gold medal and earned the right to call himself an Olympic champion. A year later, he added a Gagarin Cup to his honors list when he helped CSKA to the big prize. 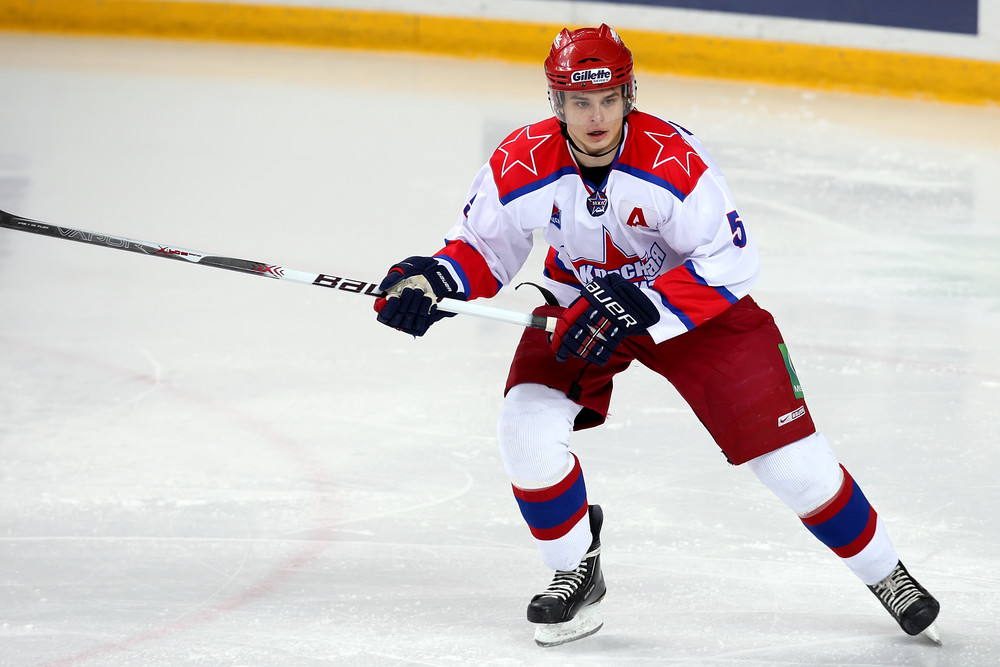 In addition to the three players listed above, a further three went on to win the Gagarin Cup after playing in the 2010 JHL Challenge Cup.

Sergei Tereshchenko leads the way. The defenseman captained team East in Petersburg, having been identified as a star in the making at Stalniye Lisy, Metallurg’s junior team. Sure enough, the Magnitogorsk native fulfilled his potential at his hometown club. After a season at Donbass to ease the transition from junior to adult hockey, Tereshchenko returned home to play a part in two Gagarin Cup winning teams in 2014 and 2016. Today he’s still playing in the Urals, but now with Traktor Chelyabinsk. 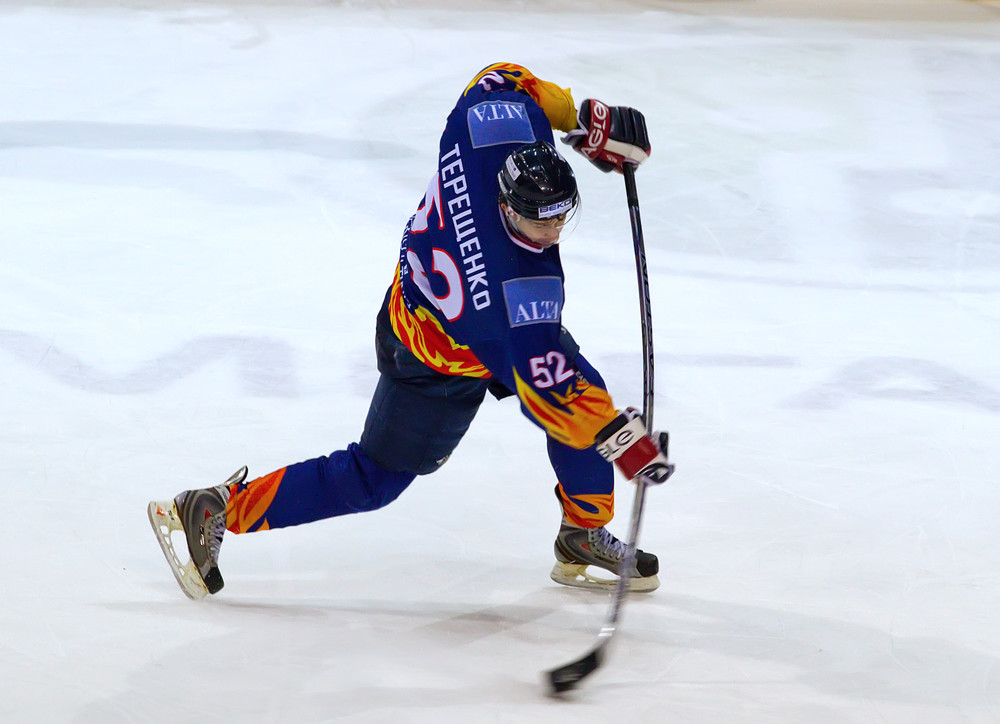 The 2018 Gagarin Cup final featured two graduates of the 2010 JHL Challenge Cup. The Ak Bars roster that defeated CSKA included goalie Emil Garipov and forward Fyodor Malykhin, both of whom lined up for Team East in Petersburg. Garipov progressed through the system in Kazan and became a first-team regular from 2014 through to last season. Along the way he played in the grand final loss in 2015 before getting his hands on the big prize at last in 2018. Last season, though, he lost his place and this season he moved to Avangard. 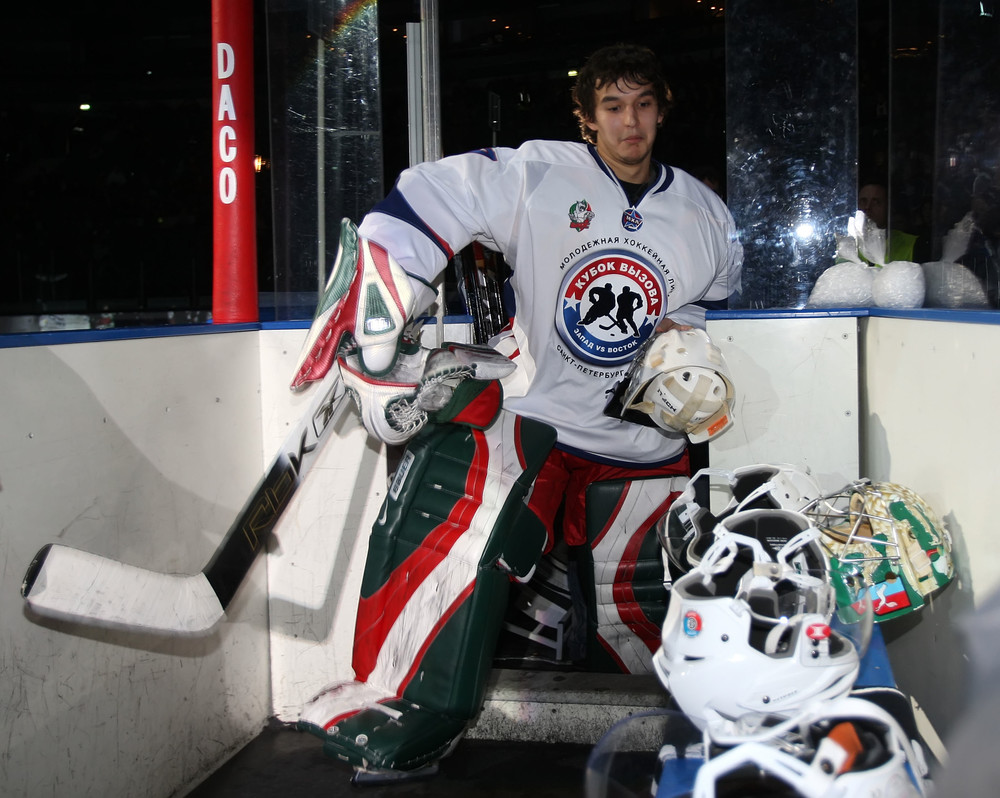 Malykhin remained at his hometown Avtomobilist until 2014, when his prolific scoring earned a KHL All-Star call and a move to Kazan. Despite struggling for form and fitness during his time with Ak Bars, Malykhin was part of that 2018 championship roster and wore the ‘A’ in that campaign. This season brought a new challenge for the forward, with a move to Traktor followed by a deadline day trade to Spartak. 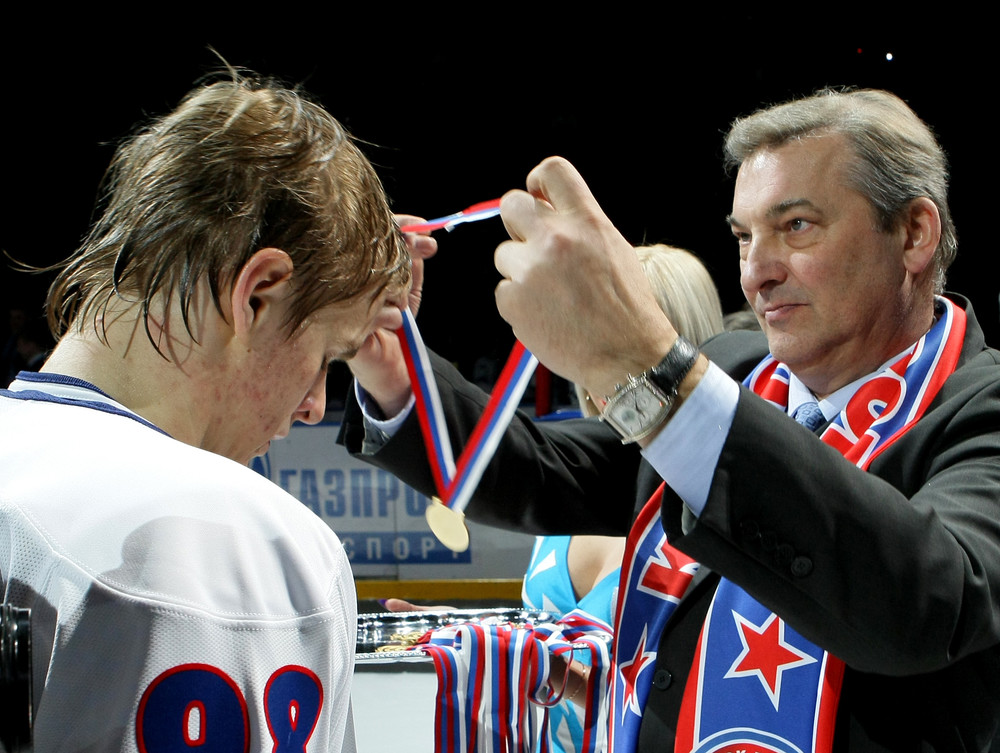 It’s not just about spotting future champions. The Challenge Cup also introduced several future KHL regulars to a wider audience. Players like Zakhar Arzamastsev, a product of the renowned Novokuznetsk school who has more than 500 regular-season appearances for – among others – Salavat Yulaev. Or Stanislav Bocharov, then another Ak Bars prospect, now the leading goalscorer at Torpedo this season. Maybe current HC Sochi forwards Dmitry Lugin and Nikita Tochitsky? 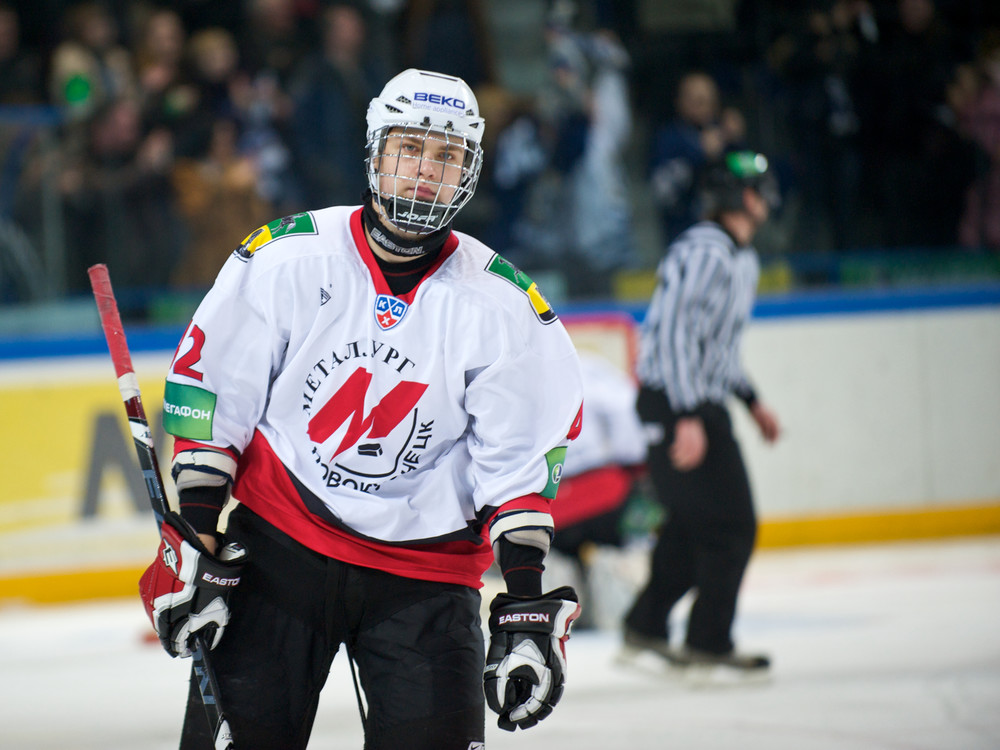 And one who got away …

However, while many players from the 2010 JHL All-Star Game went on to greater fame, one of the big stars of the game itself never quite had the career many expected of him. Eduard Baklanov potted a hat-trick for Team West. His rookie season in the JHL brought 56 (29+27) points in 62 games for Almaz, the junior team for Severstal. Yet it proved to be a highwater mark in the career of the Cherepovets native.

He never matched that productivity in later campaigns and the following two seasons brought a clutch of VHL appearances that yielded just 4 (1+3) points. By 2015/16 he was playing in Russia 3 for Slavutich Smolensk before ending his pro playing career without playing a single shift in the KHL. He later returned to Cherepovets to coach the Schastiye women’s team. 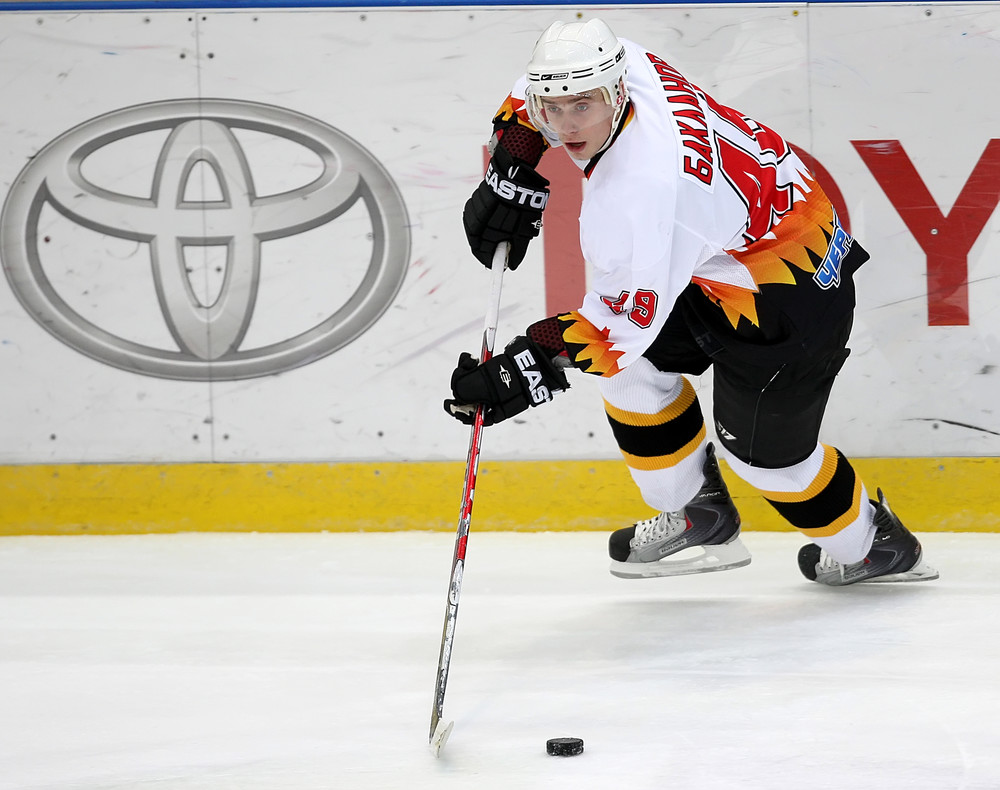