The opening day of the Channel 1 Cup saw Russia rocked in the first period of its game against Sweden. The visitor jumped to a 3-0 lead before the Red Machine revved up; the second and third periods were more encouraging for Alexei Kudashov’s men but the game ended in a 3-4 loss. It was the same scoreline in Plzen where the Czech Republic took down Finland in overtime. Traktor’s Lukas Sedlak scored twice to get the win for the Czechs.

Russia battled hard to recover a 0-3 deficit against Sweden in Moscow, but Alexei Kudashov’s team fell just short of a stirring come-from-behind victory.

Russia got off to a good start, getting a power play in the first minute. However, the Tre Kronor held firm and it was Sweden that opened the scoring on its first power play. Dynamo’s Andre Petersson was the scorer, assisted by Magnus Paajarvi Svensson of Lokomotiv, and CSKA goalie Lars Johansson. Daniel Brodin added a second midway through the first period and Sochi’s Malte Stromwall made it 3-0 at the start of the second.

Then came the fightback: Vadim Shipachyov became the second Dynamo man on the scoresheet when he got Russia’s first late in the middle frame. Then, midway through the third, Kirill Kaprizov made it 2-3. Kaprizov is always a crowd-pleaser when he appears in a Russian jersey but unfortunately on this occasion his efforts were not enough to save the team. Daniel Zaar made it 4-2 seconds later and even though Shipachyov and Kaprizov combined for the latter to score a power play goal, Russia was unable to salvage the game. 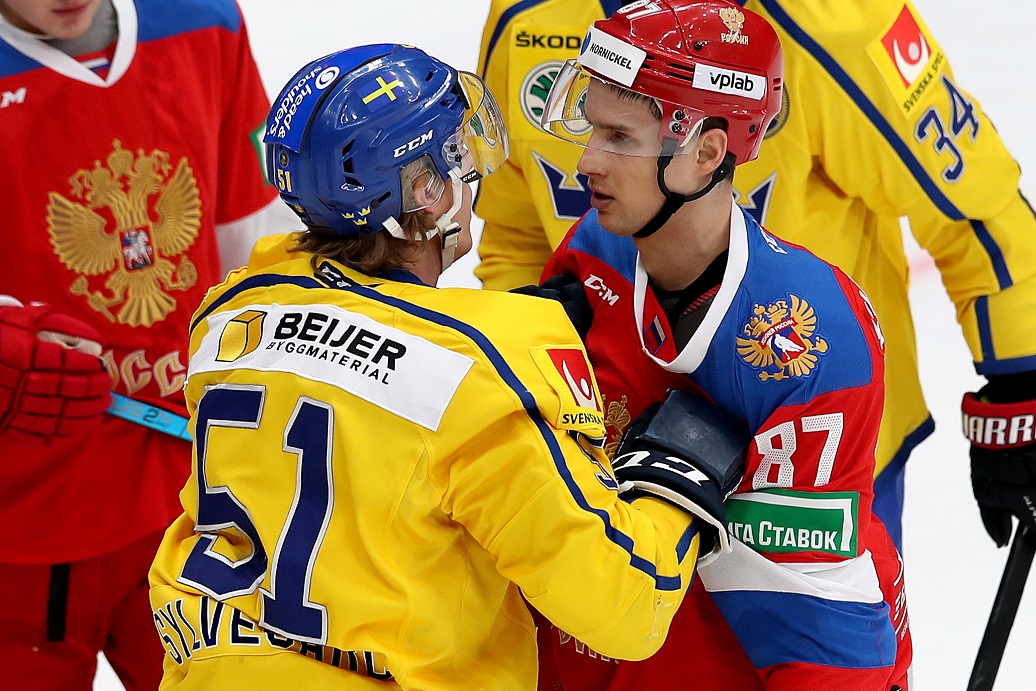 We were too timid at the start of the game, maybe we were a bit nervous. Either way, we let ourselves down at the start and missed some opportunities on the counter attack. But in the second period we took the game into our own hands and the only thing that let us down was our finishing. We had many shots, but scored only three goals.

We saw some minor flaws today. For example, we were weak on the face-off before the fourth goal. But this team hasn’t played together before, with time it will be much better. Once we got into the second period, we barely allowed Sweden to take a shot. That’s the team we want to see.

We weren’t very good at the start and we allowed some soft goals. Somehow we weren’t getting it right. The penalties too … I took a penalty that I should never have had. But after the third goal we started to play the right way and chances came along, we got goals.

Everyone knows about Vadim Shipachyov. Year after year, he shows what he can do. I see a lot of his games and I played with him before this game. He sees everything, so it’s great to play alongside him. It’s just a lot of fun with him out there.

We were a bit too emotional at the start. We were on home ice, there was a big crowd, we wanted to make a strong start but we got nervous and didn’t control the game. At the intermission, the coach told us to play better. We all tried, we got back the initiative, but we couldn’t catch up with the Swedes tonight. We need a better start.

Our power play didn’t work out, but we only really had one practice. We’re working on it, there are positives from today, and we’ll keep going and keep improving.

Thursday’s other game was played on tour in Plzen and the Czech Republic continued its strong showing in this year’s Euro tour with victory over Finland. The Czechs came to the Channel 1 Cup buoyed by victory in the Karjala Cup last month and kept up their winning streak on home ice.

However, the Finns made it tough. After the home team jumped to a 3-1 lead in the first period, with Jiri Sekac and Lukas Sedlak both on the scoresheet, Finland rallied to tie the game in the third. Jokerit’s Veli-Matti Savinainen got the equalizer in the last minute. However, it took just 23 seconds for the Czechs to get the verdict in overtime, with Traktor’s Sedlak potting his second of the night to seal the points.