In October of 1991, Slava Kozlov was lying in a hospital in the former Soviet Union. A car accident that killed his CSKA teammate Kirill Tarasov had left him clinging to life. Doctors said that a brain injury could end his hockey career forever; Kozlov spent hours in a coma, and required extensive facial reconstruction to bear a resemblance to his former self.

Fast-forward to spring, and the USSR had evaporated from existence. In a crescendo no one saw coming – except, perhaps, Detroit owner Mike Ilitch – so had Kozlov’s nightmare. On March 12, 1992, he debuted against all odds for the Detroit Red Wings, notching two assists in a narrow victory over the Saint Louis Blues. It was less than six months on from the fatal car accident that had ended one NHL dream, and set in motion another.

Kozlov would raise the Stanley Cup in 1997 and 1998 as a member of the incomparable Russian Five, and would return to Russia to win back-to-back Gagarin Cups (first with Salavat Yulaev in 2011, and the following season with Dynamo Moscow). There are members of the Hockey Hall of Fame with fewer championships to their names, but Kozlov’s aspirations have hardly run dry. His next goal is to raise a cup as a coach, and with Avangard Omsk at the top of the Chernyshev Division, he may not have long to wait. Vyacheslav Kozlov serves as an assistant coach under decorated NHL veteran Bob Hartley, after previous stints with Spartak Moscow and the VHL’s Khimik Voskresensk – the club of his hometown.

I chatted with Kozlov after Avangard’s clash with Dinamo Minsk in Balashikha. Many thanks to Natasha Kovalenko who assisted with translation. 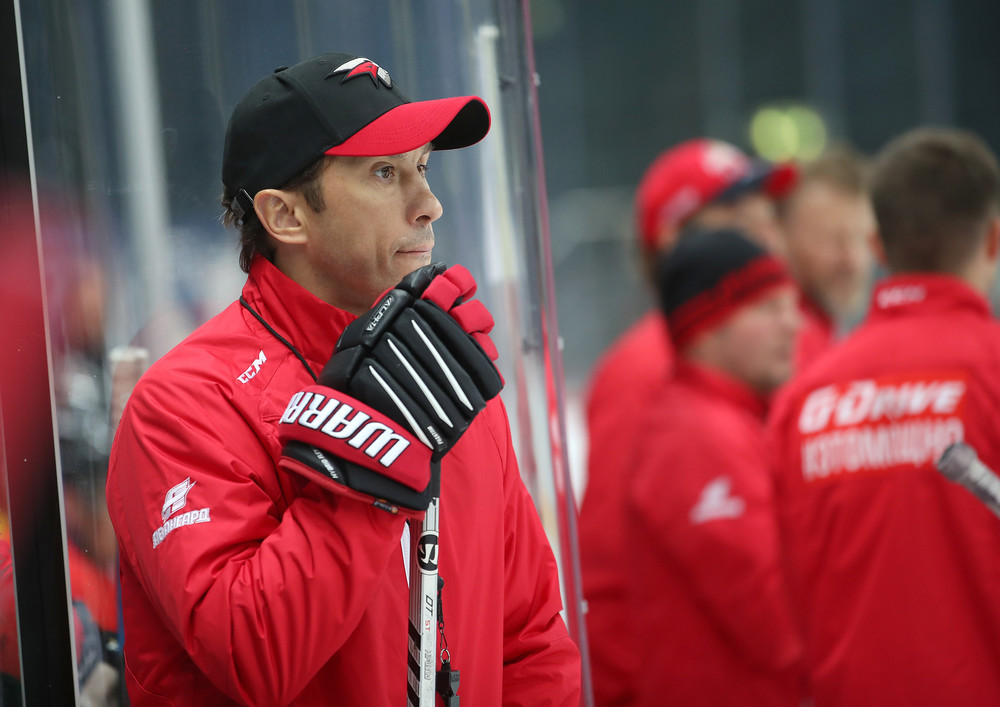 Gillian Kemmerer (GK): You came to the NHL after a car accident nearly claimed your life. At the time you were hospitalized, did you ever think you would play again?

Slava Kozlov (SK): Some bad thoughts were coming into my mind, but I kept on hoping that everything would be okay [in the end].

GK: Did it surprise you when the Red Wings showed up at the hospital, given how uncertain your future looked?

SK: [Detroit] treated me very well. You can say they lent me a helping hand back then. They never speculated...first and foremost, they helped me to leave the country. They did full medical checkups and offered a good contract with good conditions and terms. They never told me I would have to deal with serious consequences. I am very grateful to all of the Detroit team – the owners, Mr. Ilitch’s team and everybody who was working there at the time. They treated me with great understanding, and I am very thankful for that.

GK: Scotty Bowman was your first NHL coach, one of the best in hockey history. Is there any memory that sticks out from your time in his locker room?

SK: Actually, there is one recollection. After a couple of games, all of the players were divided into three groups. Each group was supposed to have a talk with Bowman, [Dave] Lewis or [Barry] Smith. I was hoping to avoid talking to Bowman, and would go to Lewis or Smith. But I saw my number in front of Bowman’s name, meaning that I had to talk to him.

When I was on my way to this conversation, I thought that he would be teaching me or expressing complaints about my game. But actually we talked about my family, nutrition and Bowman even recommended a restaurant that I should visit. Afterward, I made good friends with the owner of the restaurant and never paid for my dinners. I mentioned it to a journalist and they published that I had visited this restaurant, so it was a good advertisement!

GK: Do you feel that your experience under Bowman impacted your future coaching style?

SK: Well actually I was 25 at the time, and just enjoying hockey. Enjoying the game. I was not anticipating my future as a coach, so I guess that it all started later on. 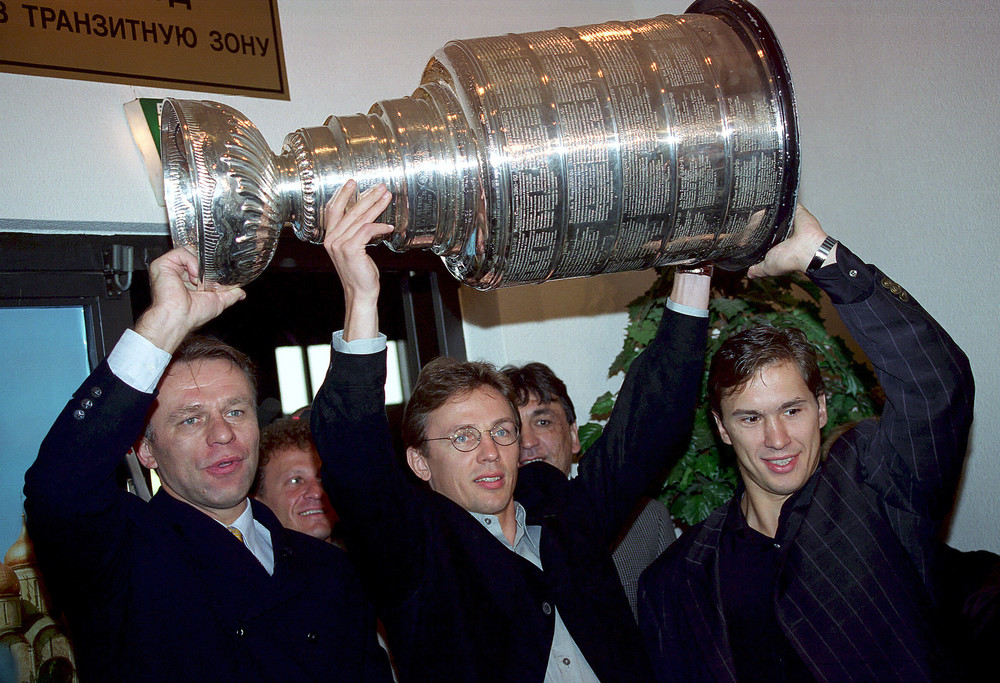 GK: I’ve heard an interesting saying in Russia: “in order to be a coach, you have to kill the player inside of you.” Has that rung true in your career?

SK: I kept on playing until the age of 43, and maybe I could have played even a few years more. But I’ve never regretted finishing my career. Maybe for some, it’s a tough decision to finish playing. For me, it was an easy one and I’ve never looked back on that.

GK: Is there anything you know now, as a coach, that you wish you had known as a player?

GK: As a member of the “Russian Five,” your playing style was defined by Tarasov and Tikhonov – the focus on the team, possession and passing, creativity. Do you think that this style of play could ever be replicated, given how much training methods have changed?

SK: This could be tried, but it would be really hard to replicate it. Me and the other guys from the Russian Five, we had a great feel for one another. I was the youngest of the group, and the other guys had passed through the school of Tarasov and Tikhonov. We had great chemistry because we could anticipate the moves of each other. It was really an easy adjustment for me. It’s hard to say whether it could be replicated again because hockey has changed – it became faster. But I hope that either in the KHL or the NHL, someone can try and do it one day.

GK: You’ve won two Stanley Cups and two Gagarin Cups. How different were the roads to these championships?

SK: When you are playing in either league – whatever league or whatever team it is, you’re always aiming to [be] the best. I cannot actually compare them because these are two different tournaments, two different leagues. You always want to win. As for me, I was always just enjoying my time playing and winning.

GK: There is a lot of discussion about the differences between North American and Russian styles of play. A North American, Bob Hartley, is leading Avangard – a team comprised of many nationalities. How do you create a unified culture?

SK: Bob has very rich winning experience. He won the Stanley Cup, and then the Swiss league. Hockey is a simple game of no nationality, and Bob knows perfectly how to manage people and give them the culture of winning. We are working with NHL standards and the NHL mentality [at Avangard]. Our locker room looks like one in the NHL, and even our schedule follows NHL standards. 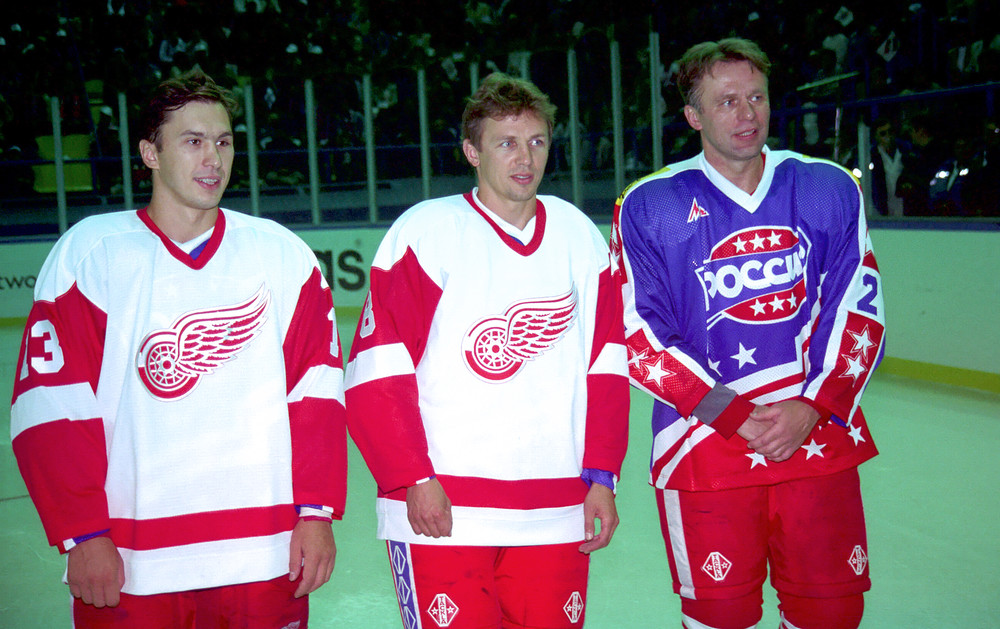 GK: This is an interesting point, because there is often a question of how Russian players adjust from the KHL to the NHL. Some of them have a hard time.

SK: I think that it fully depends on the personality and the character of the player. For some, it’s way easier, and for others, it’s really tough. You have to change countries, leave your relatives and loved ones behind, and adopt to a tougher style of play. It all depends on the person.

GK: Adjusting to the KHL can be difficult too. One of the things I hear from expats is about the travel schedule – the long flights, changing time zones. How do you cope?

SK: We have just two road trips per year that are kind of tough – the trips to China and the Far East [i.e. Vladivostok]. To tell the truth, I spent last year in the Supreme Hockey League [VHL - the second-highest level of Russian hockey], and we were spending seven or eight hours on a bus. If you like what you are doing, you do not care much about the schedule or the road trips. In this respect, the conditions in the KHL are not much different from the ones in the NHL. 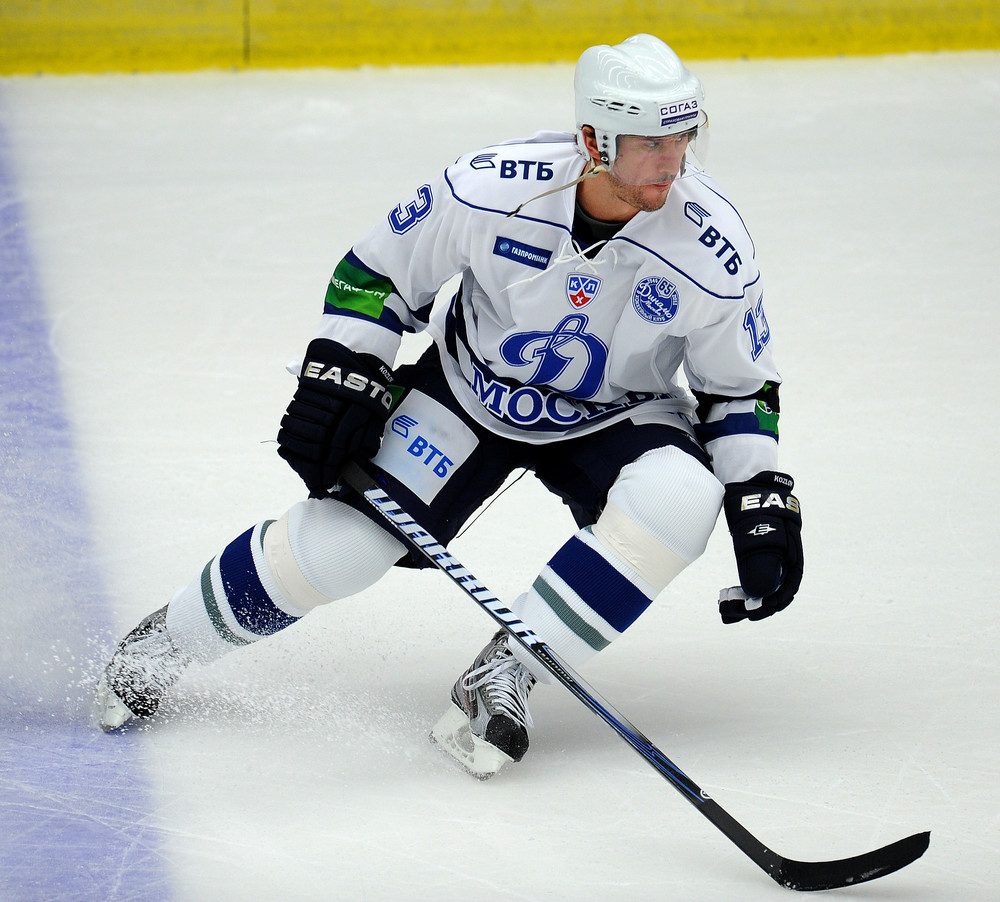 GK: Okay, so any tips for passing the time?

SK: I’ve never had any problems with sleeping!

GK: Ilya Kovalchuk was rumored to be in talks with Avangard about a possible KHL return. How would he fit into your lineup?

SK: I know that our chairman, Alexander Krylov, had a talk with Ilya because they are good friends. For now he has a valid contract with Los Angeles, so we cannot have any negotiations with him. I also know that Ilya wanted to continue playing in the NHL, so he will be looking for opportunities there. If we speak about Avangard, I think that any team would love having him on the roster because he is a classy player.

GK: We are getting deeper into the KHL playoff race. What will Avangard focus on going into the next few months? Where do you need to improve?

SK: Currently we are facing lots of injuries and are hoping to see guys back on the ice. We are looking to improve our powerplay for sure, and looking to acquire some players that would be helpful to our [current roster]. 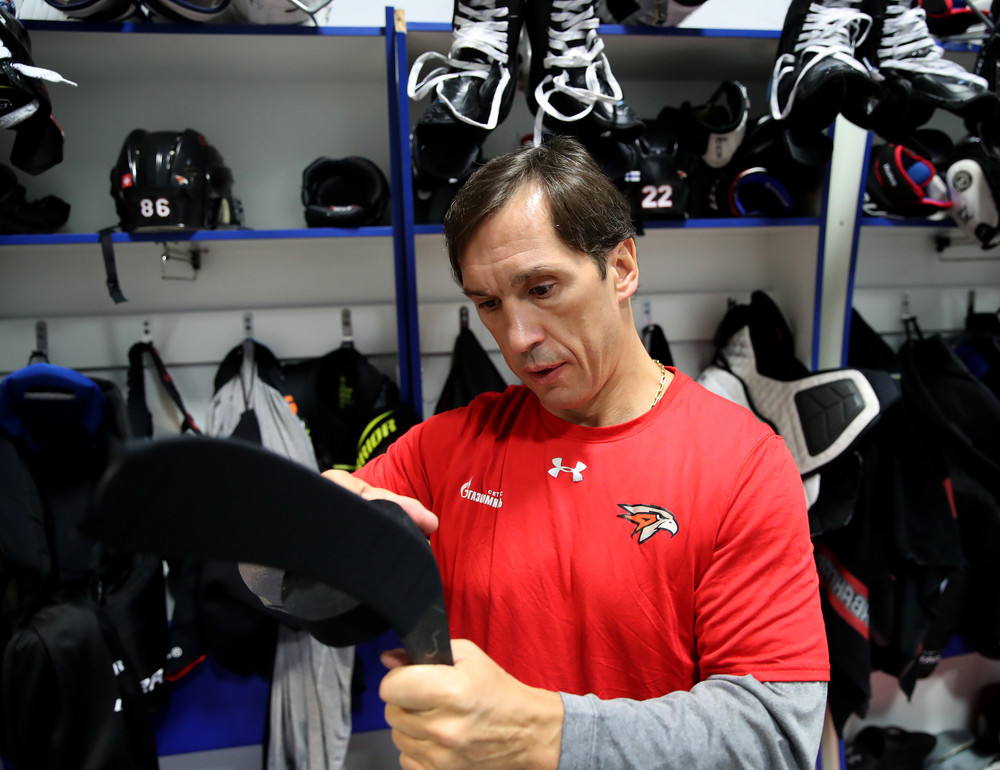 GK: Your nephew Vladislav Namestnikov is playing in the NHL for the Ottawa Senators. How would you say he’s doing so far – both as an uncle and a coach?

SK: I know the way Vlad is practicing; he has really good speed and a good understanding of the game. His big plus is that he can play in any position – he can be a center, he can be a winger, he can also play great in the powerplay, penalty kill and 5-on-5 situations.

GK: Are there any NHL prospects that you’ve coached or watched here that you think will have great careers in North America?

GK: Any advice you would send them off with?

SK: As for correcting something or doing-over, there is nothing of that kind. As far as a desire that I have – I want to win a cup in the role of a coach. 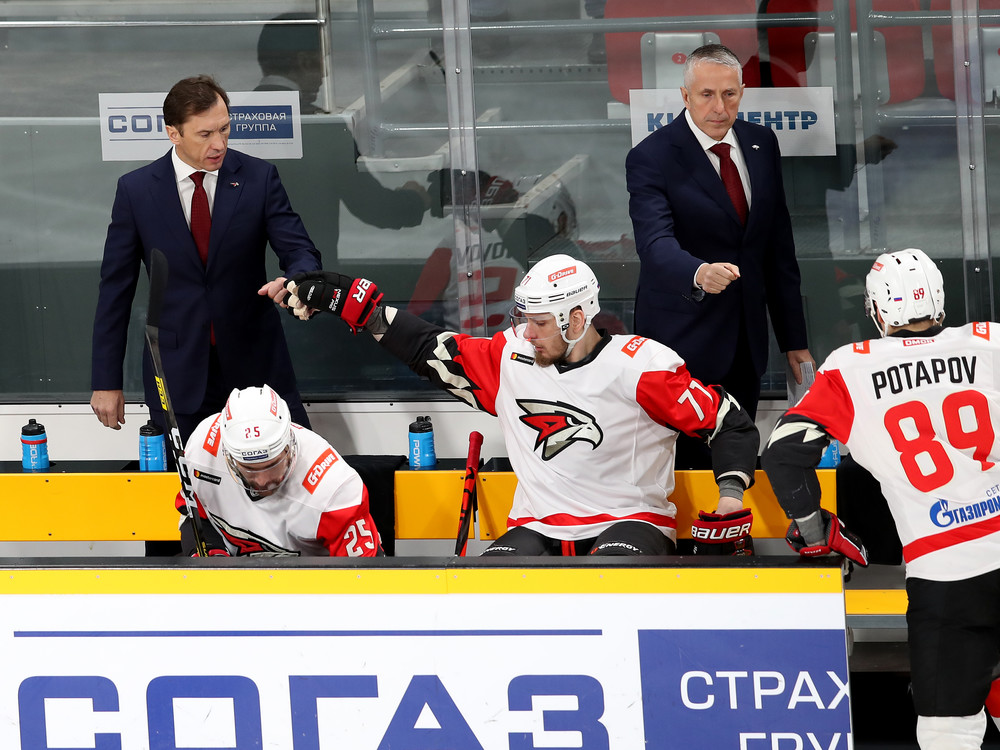