For the most part, it was a smooth journey to complete the record. Apart from one scare late in the first period, Ak Bars goalie Timur Bilyalov had relatively little to do in the early stages of Thursday’s game against Traktor Chelyabinsk. And, as the clock ticked through the opening minutes of the second period in Kazan, history was made. Bilyalov kept the visitor at bay and the time since he last allowed a goal went past 305 minutes.

The number was significant. Back in February 2004, Lada’s Jiri Trvaj set a goaltending record for Russian championship hockey: 305 minutes, 56 seconds. Timur Bilyalov went through that mark and added another 10 minutes before finally succumbing. Traktor’s Czech forward Lukas Sedlak stopped that clock – at last – on 316:09. Earlier in the same game, Bilyalov moved past the KHL record of 302:11, set by Alexei Murygin.

“It’s nice to set the record but without the team it would never have happened,” Bilyalov said after the game. “Thanks to the guys, for always chasing down the puck, getting their bodies in the way, trying to help me. Without them, this record would not exist.”

After blanking Avangard on Tuesday and overtaking Fred Braithwaite’s club record for Ak Bars, Bilyalov’s hot streak was the big talking point ahead of the Traktor game. “Of course, it weighed on my mind. The hardest thing was getting used to the idea that I was just 20 minutes away from a record. The guys were talking about it, it sticks in your mind and no matter what you do, you can’t forget about it. Luckily, it all worked out.”

Bilyalov’s team-mates also paid tribute to the goalie. Forward Stanislav Galiyev said: “He’s very calm on the crease. Even in practice, it’s hard to score on him. Personally, I’m really happy for him: we play together on the same team, he’s a good guy and he deserves this record. Here’s hoping he can start another series and beat his own record!”

Club captain Danis Zaripov added: “Times change, and new leaders emerge. I’m so pleased for Timur. It’s really good that the youngest goalie ever to set this kind of record plays for us, on the same team as me. Let’s keep it going. I hope he can keep pushing this team forwards and winning more games.” 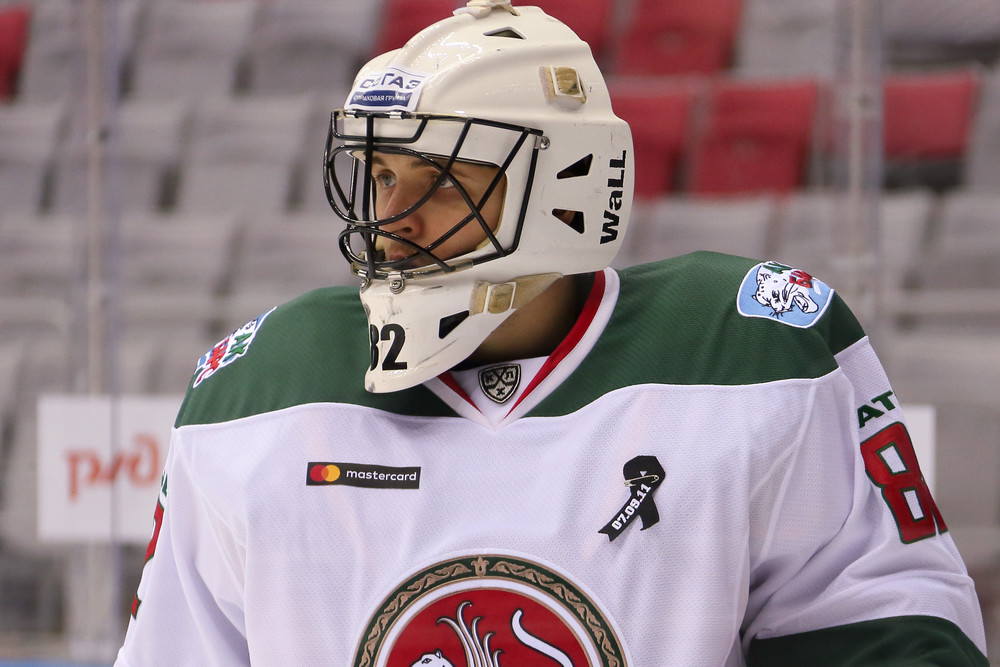 The road to the record

The run began in Kazan on Oct. 17. Jokerit’s Brian O’Neill scored on Bilyalov early in the third period, tying the game at 3-3 before Ak Bars won in overtime. The next game, unusually, ended with Ak Bars defeated: Bilyalov defied Metallurg for 65 goalless minutes before Magnitka took the verdict in a shoot-out. Successful shoot-out attempts, however, don’t count in these stats and the shut-out sequence was intact. At the end of October, Bilyalov backstopped a 2-0 win over Admiral and in the next game he was called off the bench to replace Adam Reideborn after Neftekhimik cruised into a 4-0 lead in the Tatarstan derby. Shut-out wins against Severstal and Avangard, either side of the international break, brought the 24-year-old to the brink of the record.

After all that, Bilyalov is also topping the charts for this season’s goalies. With a GAA of 0.80, and 96.6% of shots saved, he’s ahead of the pack in the latest KHL stats. His six shut-outs are another league-leading indicator for a young man right on top of his game.

Via Riga to the history books

However, to make his name in the KHL, Bilyalov had to leave Kazan. He spent the 2018/19 playing for Dinamo Riga – and quickly made his name in Latvia. Life with Dinamo wasn’t always easy and the team narrowly failed to secure play-off place last season, but there was no doubting the significance of the goalie’s contribution. He secured 15 wins in 38 games, had four shut-outs – his first in the KHL – and finished with commendable numbers: 2:18 GAA and a 93.0% save ratio. Back in Tatarstan, his hometown team was watching, and offered him a return over the summer.

Once back in Kazan, Bilyalov knew that he was likely to start as understudy to another summer signing, Adam Reideborn. The Swede had established himself as the #1 at Djurgardens and had a GAA below 2.00 in his last three regular season campaigns. He was also on the fringes of the Tre Kronor’s national program. Bilyalov, by contrast, still had to prove that his break-out season in Riga was no flash in the pan.

The relationship between the two goalies is a valuable one, according to Bilyalov. “If the coaches give me the chance, I’ll fight to be number one,” he said. “There’s healthy competition, Adam and I have a great relationship. We’re both working hard and it’s up to the coaches to decide who plays. We’re both striving for it, him and me, and that’s normal.”

Some of the questions about the relationship between the two goalies stemmed from a video clip at a pre-season tournament shortly after Reideborn arrived at the club. In it, Bilyalov appeared to snub his team-mate on his way into the locker room. In the pressure-cooker environment that surrounds Ak Bars, this turned into headline news: local media devoted plenty of time to discussing what it all meant. In reality though, the explanation was fairly simple: the two didn’t see each other at that moment, but caught up later, once the cameras had stopped rolling.

Bilyalov’s team-mates are equally comfortable with both goalies as well. Mikael Wikstrand, the Swede who is currently leading Kazan’s defense, reckons the only difference between them is that Timur doesn’t speak much Swedish.

“We’ve got two great goalies,” he told the club website after Ak Bars defeated Admiral. “Adam did well in recent games and Timur was great today. They’re both good guys, we’re lucky with our goalies.”

“The only difference is that I can speak Swedish with Adam and, of course, I understand him a bit better. But they are both good goalies.” 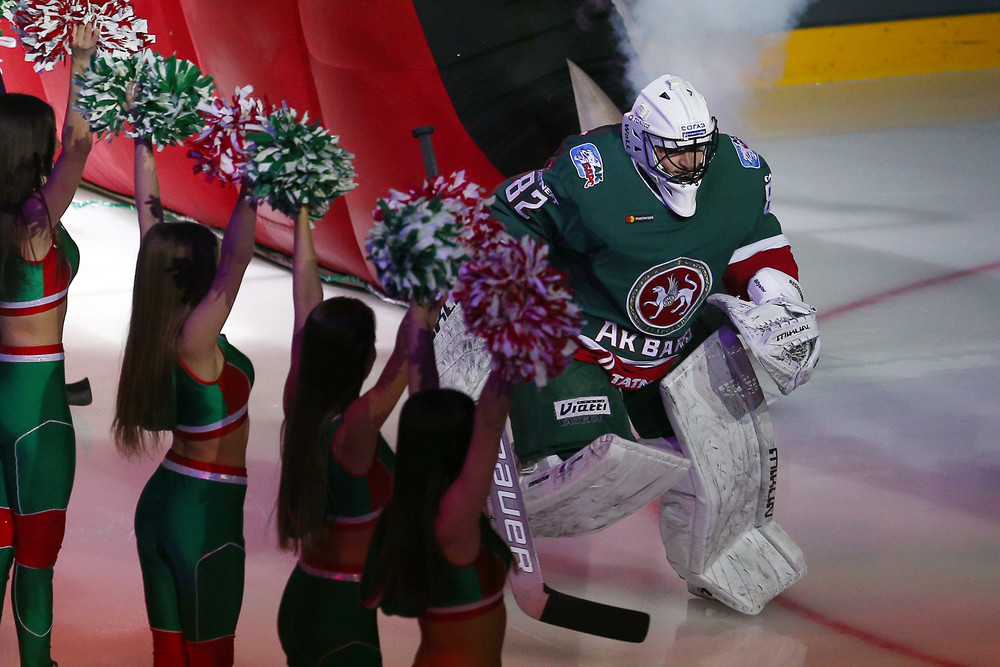 Bilyalov’s streak broke a 15-year-old record and the man himself was still a schoolboy when Jiri Trvaj produced his impressive run. Trvaj was playing for Lada Togliatti at the time and helped the team to third place in the Russian championship. The Czech arrived partway through the 2003/04 season, and his hot streak came in February. He replaced another import goalie, Canadian Jean-Francois Labbe, and shared duties with a young Vasily Koshechkin. Among the other notable names on that Lada roster was Ilya Vorobyov, back in Russia after a decade playing in Germany.

That season saw Lada come second in regular season play behind Metallurg Magnitogorsk. Avangard, the team that ended Trvaj’s run, went on to defeat Magnitka in the playoff final. Metallurg Novokuznetsk was fourth in regular season; like Lada, the club now plays in the second-tier VHL.

The leading scorer that season was Maxim Sushinsky; current Severstal head coach Andrei Razin was the only non-Avangard player among the top five. And seventh on the list was an emerging CSKA forward called Sergei Mozyakin, whose 40 points in 45 regular-season games represented a break-out season in the Russian top-flight. 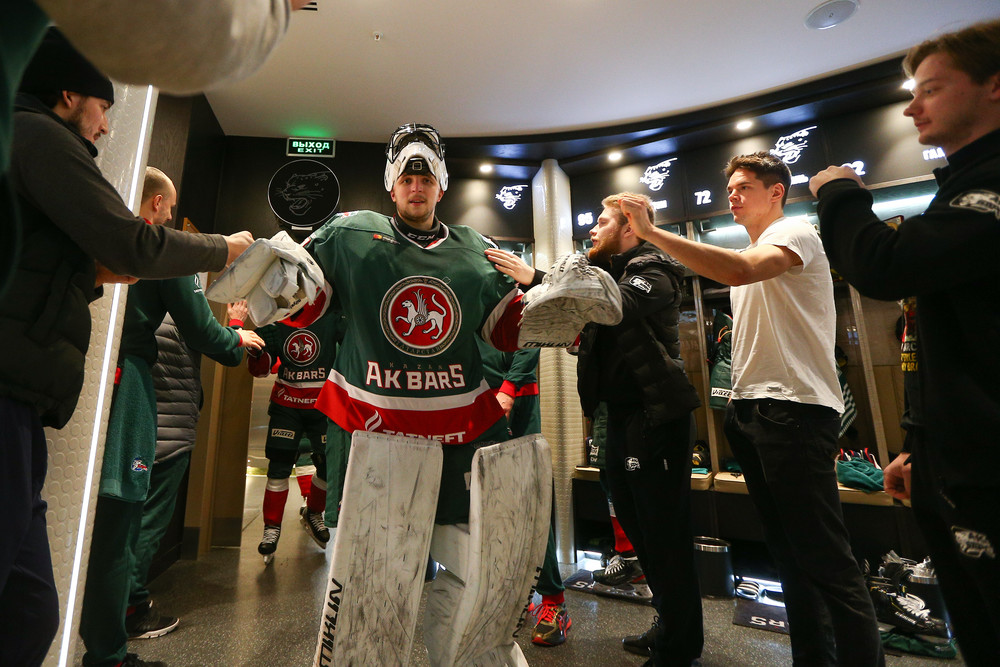