A record-breaking chemistry – Neftekhimik on the march

One of the best things about the current KHL season has been the rise of the outsiders. So far, we’ve seen Vityaz on top of the table and Kunlun Red Star set a club record winning streak. Now Neftekhimik is hitting the headlines.

At first glance, the season in Nizhnekamsk might not look all that unusual. Neftekhimik is fifth in the Eastern Conference, and only two points clear of eighth place. During the club’s time in the KHL, it’s tended to be in a battle to make the playoffs, succeeding on six times in 11 seasons. However, a closer look shows a team on a nine-game unbeaten run – a new club record – and buoyed by impressive wins against Eastern Conference leader Ak Bars and defending KHL champion CSKA Moscow in its last two games. This is something unusual.

It could have been rather different. Neftekhimik had a miserable pre-season, failing to win a single game against KHL opposition. The team went through a fundamental summer rebuild, replacing all of its imports, and it took time for the new-look roster to gel. The early weeks of KHL action were not hugely encouraging either. Results in the first few games were spotty, and late September saw the start of a six-game losing streak that culminated in back-to-back losses in Beijing. For some clubs, that might have been a cue to pull the trigger, fire the head coach and indulge in a spot of shock therapy.

But not at Neftekhimik. The team, founded in the 1960s by the city’s Petro-chemical factory (the name means Petro-chemist), believed that Vyacheslav Butsayev was on the way to finding the right formula. The head coach was given time, his roster was allowed to refine its game and, steadily, results started to come.

An overtime win over Sibir started the revival, a 2-1 win over SKA hinted at the potential within the squad. Five more one-goal games went Neftekhimik’s way, including an overtime win in Petersburg, before those back-to-back victories over this season’s leading teams announced a genuine new challenger had emerged.

Part of the progress has been down to the contribution of Matt White and Zack Mitchell. The forwards, acquired in the summer with a view to replacing the potent Finnish trio of Joonas Nattinen, Mikael Ruohomaa and Juuso Puustinen, are among the leading scorers this season. White, signed from Germany’s Augsberg Panthers, leads the way with 18 (7+11) points; Mitchell, previously part of the LA Kings organization, is third on the list with 13 (7+6). Defenseman Ryan Murphy has also made a solid contribution.

However, a club that has shown patience with its coaching staff has not been afraid of decisive action when it comes to underperforming players. Kerby Rychel, once a Blue Jackets prospect, was dumped after seven games and no points (plus a rating of -6). That freed up space to bring in Jacob Berglund, surprisingly shifted by Dinamo Riga, and experienced KHLer Jonas Enlund. Those two have played six games each and contributed four goals between them. More offensive options, more prospects of continuing to move up the table.

Among the Russians on the team, more than one is relishing a new opportunity to kickstart his career. Take Stepan Zakharchuk, previously notoriously for bad fouls and long bans. Butsayev made him club captain – raising more than a few eyebrows – and has been richly rewarded. Just 6 PIMs all season suggest a reformed character, while 8 (2+6) points in 24 games represents a bigger haul than in his two previous seasons in the KHL.

Another defenseman, Ziyat Paigin, looked to be in becoming one of those players whose potential was not to be realized. Last season he spent time with Lokomotiv and Sochi in the KHL, plus a stint at Lada in the VHL, without ever quite establishing himself. Now, at Neftekhimik, he’s a key player on defense and he opened the scoring in that 4-1 win over CSKA.

At the other end of his career, veteran goalie Konstantin Barulin is also in impressive form. It’s not exactly a second chance for a player with a solid collection of medals from international play, more a second youth for the 35-year-old who went to the Gagarin Cup final with Atlant in 2011.

An incubator for talent

Another key plank of Neftekhimik’s success is its ability to nurture talented players. Some, like Pavel Poryadin and Ildar Shiksatdarov, entered the organization from elsewhere (Poryadin played for Stupino in the JHL before coming to Nizhnekamsk in 2015/16 as a 19-year-old, Shiksatdarov started at CSKA). Some, like Damir Sharipzyanov, emerged in the juniors with Reaktor before gaining experience elsewhere and returning home. Others, like Rafael Bikmullin and Maxim Groshev, have learned their trade at the club and emerged into first team. Groshev, 19, is in his first season of KHL action and is currently on international duty with Russia’s U20s in their Super Series tour of Canada.

It all adds up to a steady production line of potential that boasts former #1 NHL Draft pick Nail Yakupov among its graduates. And it’s helping to build a team capable of taking on any opponent in this season’s KHL.

Neftekhimik’s success this season has not gone unnoticed at a higher level. There are international debuts for two of the players behind the team’s resurgence during this week’s schedule. Damir Sharipzyanov got a call-up for Russia’s first team and opened the scoring in Thursday’s Karjala Cup game against Finland in Helsinki. The 23-year-old had previously made a handful of appearances for Russia’s second string but got his first goal in international hockey at any age group since scoring in the 2013 Hlinka Cup.

Pavel Poryadin also came to the attention of the national selectors for the first time, getting a call from Russia’s B Team at the Deutschland Cup. Poryadin, 23, has never previously represented his country in any form of international play.

However, recognition at international level could prove a double-edged sword. Earlier this season, Vityaz saw two key players – goalie Alexander Samonov and forward Artyom Shvets-Rogovoi – lured away to SKA St. Petersburg after they picked up rave reviews for their role in taking the team to the top of the table. As well as the challenge of keeping its run going, Neftekhimik may also need to be ready to fight to keep hold of its best players. 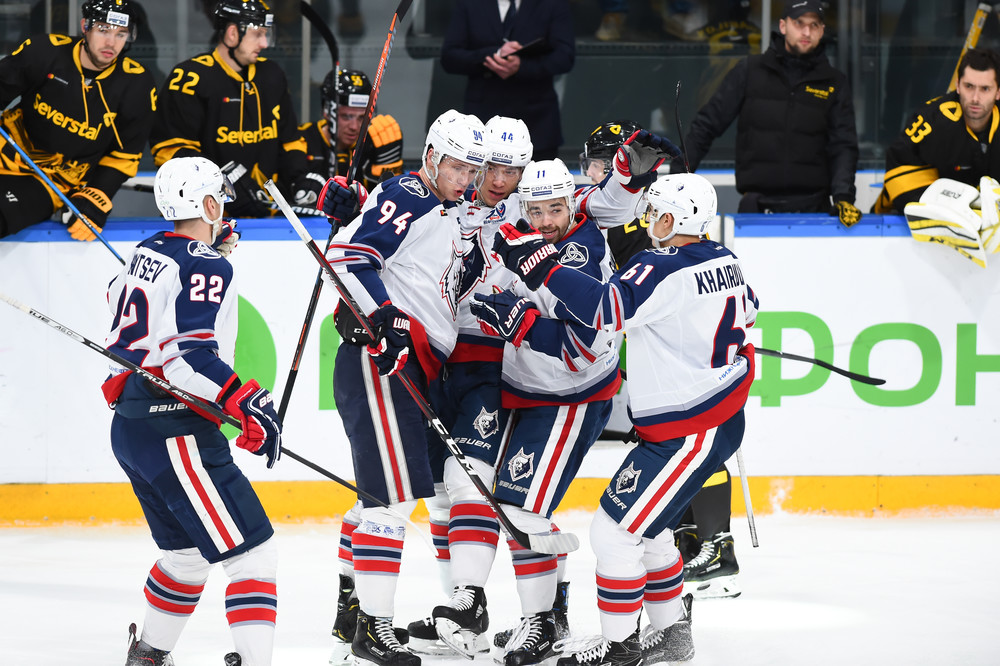