Pasquale: I moved to Kazakhstan one week after my marriage

Barys’ goalie, who was awarded Best goalie honors last week, talked to KHL.ru about his first trip to the Far East, his team’s excellent start, his injury, Russian players in the NHL, and much more.

The Canadian goalie had his KHL debut on September 3 and recorded his first shutout on October 11 against Sibir in Novosibirsk. Edward Pasquale stopped all the 26 shots by Traktor in the September 20 game in Almaty, but for some reason, his win wasn’t recorded as a shutout.

After more than one month and a half in the KHL, it can be said that Pasquale has adapted to his new reality. “Everything is great,” the goalie says. “I managed to adapt during the training camp and the preseason. First, I got used to the different time zones, then to the ice at the local arena. I had no problems with it, as I spent my whole career playing on the smaller ice surface. Barys had a strong start of the season, and now we need to keep our pace. We have a good team, with a solid defense, and as a goalie, I can’t but enjoy it.”

However, there is a thing the goalie still needs to get used to: “The calendar,” Pasquale explains. “In the AHL, where I played most of my career, it’s very different. You have 4-5 games a week there, with fewer practices. Here you can practice even 3-4 times before playing. I am not saying that it’s terrible, just different. Also, here in the KHL, you meet rinks of any dimension. This variety is something new to me. Hockey plays differently on the differently-sized arenas. Thankfully, before the games, we have our morning skate, where you can get used to the new rink size if yesterday you played on a European-sized surface, and then you move to a Canadian-sized ice pad.”

In the 2019 offseason, Pasquale moved overseas for the first time. In the KHL, he met his first Russian-speaking coach in his career. “I don’t feel any terrible difficulty due to the language barrier,” the goalie says. “If anything, Darren Dietz or Maxim Semyonov are always ready to secure that I correctly understood the drills.”

I have no clue how I could convince my wife to adopt such a schedule, but I did it! Brittany is a fantastic person; she understood that I had an excellent opportunity for my career and allowed me to follow my dreams.

To defend Barys’ goal, the Canadian has a phenomenal competitor in Henrik Karlsson. The Swedish-native goalie is now even representing Kazakhstan in international competitions. “You always need healthy competition. Such stimuli make you a better player and allow you not to relax and reduce the pressure on yourself, knowing that there is another goalie behind you, ready to take your place,” Pasquale explains. “By the way, inner competition exists not only among goalies but also among defensemen and forwards. This kind of internal clash makes teams better, and we wouldn’t have such good results without it. Henrik and I are friends now, and he was one of the first to congratulate with me for being the week’s top goalie.”

The goalie is aware of the fact that playing as a team is fundamental to achieve success. “We played excellently on the road last week. Each of us could have been awarded the best player of the week. Without the help of my team, I wouldn’t have got the honors.” 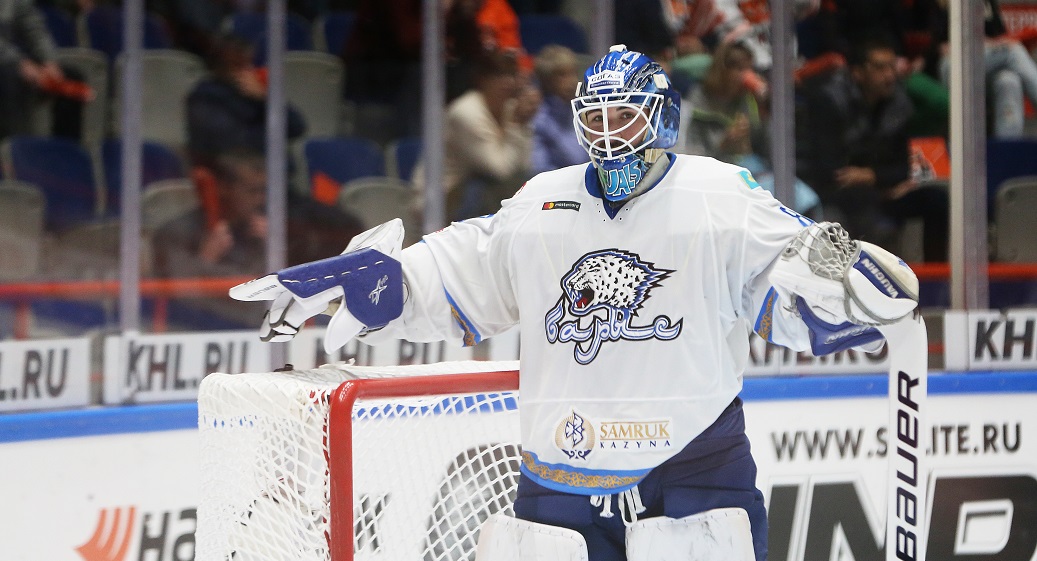 “I wasn't awarded a shutout, but I don’t care about it”

Pasquale had a kind of shock therapy at the start of his KHL career since his first road trip was in the Far East. “That trip made me understand right away what a long flight is. Now I know what you need to be ready for this. I’ll be frank, it’s tough stuff, but nothing terrible.”

In September, Barys played two games in Almaty, when, in both cases, the local fans flooded the games to sell-out the new Almaty Arena. Pasquale enjoyed the atmosphere in the southern Kazakh capital. “We played two fantastic matches there, the atmosphere was incredible, the city is surprisingly inspiring with a great view of the close mountains. We were happy to win both games, Barys played in Almaty for the first time, and we wanted to show our best game.”

In Almaty, Pasquale stopped 26 shots against Traktor, but he wasn’t awarded a shutout in the stats. “I didn’t understand the ref correctly,” the goalie explains. “I thought that he was signaling a delayed penalty, so I run to the bench, and we iced the sixth skater. Thus, in the game sheet, I don’t have sixty minutes played, but a few seconds less. But I don’t care about it; we won, everything else is secondary.” 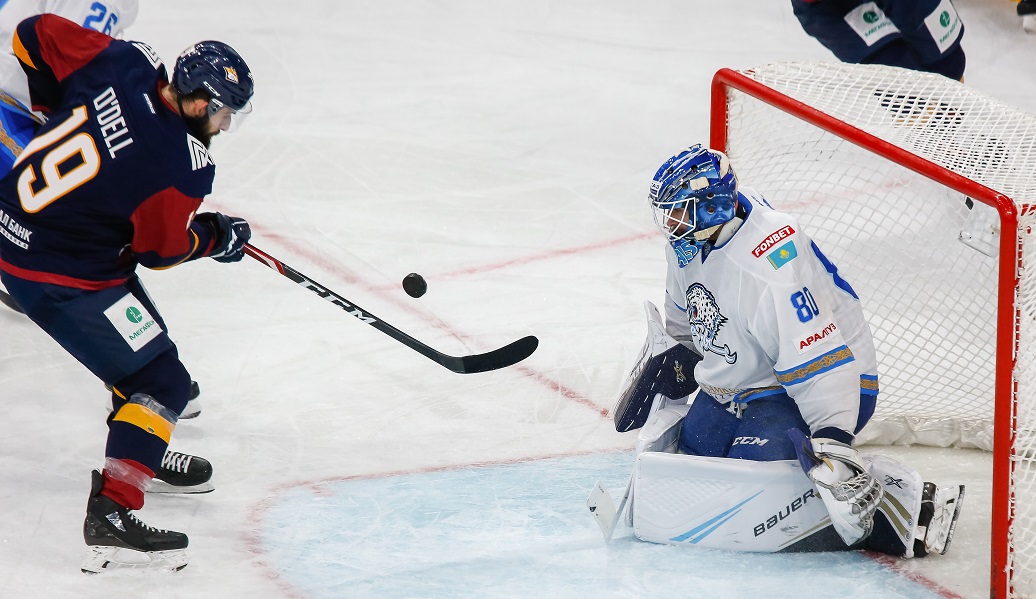 “I underwent two surgeries, and as a result, I missed 18 months”

Pasquale was born in Toronto - a city renowned for its love for hockey. As it happens in many Canadian families, he’s not the lone player in his family. “My cousin also played hockey at a high level, in the Ontario Hockey League. When you are from Toronto, you live and breath hockey; everyone is playing hockey there; it’s a lifestyle.” Pasquale had a normal childhood in Toronto with his family. “My father is on a pension now. Earlier, he worked at the tax office. My mother was a full-time mother; we are three: I am the youngest child, then there are my brother and my sister. She had enough stuff going on.”

He played almost all the time on goal. “You don’t pick to be a goalie; it’s the role to come to you. When I was a little kid, my skating wasn’t the best; therefore, our coach asked me to try to play on the goal. I played well, and I have been a goalie since that day.”

In the AHL, where I played most of my career, it’s very different. You have 4-5 games a week there, with fewer practices. Here you can practice even 3-4 times before playing. I am not saying that it’s terrible, just different.

After playing several seasons in the AHL, finally, Pasquale had the chance to play three games at the NHL level, and his dream came true. “I was apprehensive,” the goalie recalls his debut in the NHL with the Tampa Bay Lightning. “We flew from Philadelphia to Detroit, and the coach told me: ‘Call your family and friends, and tell them to buy tickets to Detroit. Tomorrow you’ll play your first game in the NHL.’ It was a tense clash; we won 6-5 SO. I think that I don’t have to describe what kind of emotions I was feeling. It was my first game, and we had the SO, but we won!”

Tampa Bay is one of the best-known NHL team in Russia, because of Andrei Vasilevsky and Nikita Kucherov. “I talked a lot with Andrei, he’s a great guy, he supported me and gave excellent advice. With Nikita, not so much. He’s a more reserved person. Both are fantastic, hard-working players. They go the extra mile, and that’s the reason why they are among the best in their respective roles.” 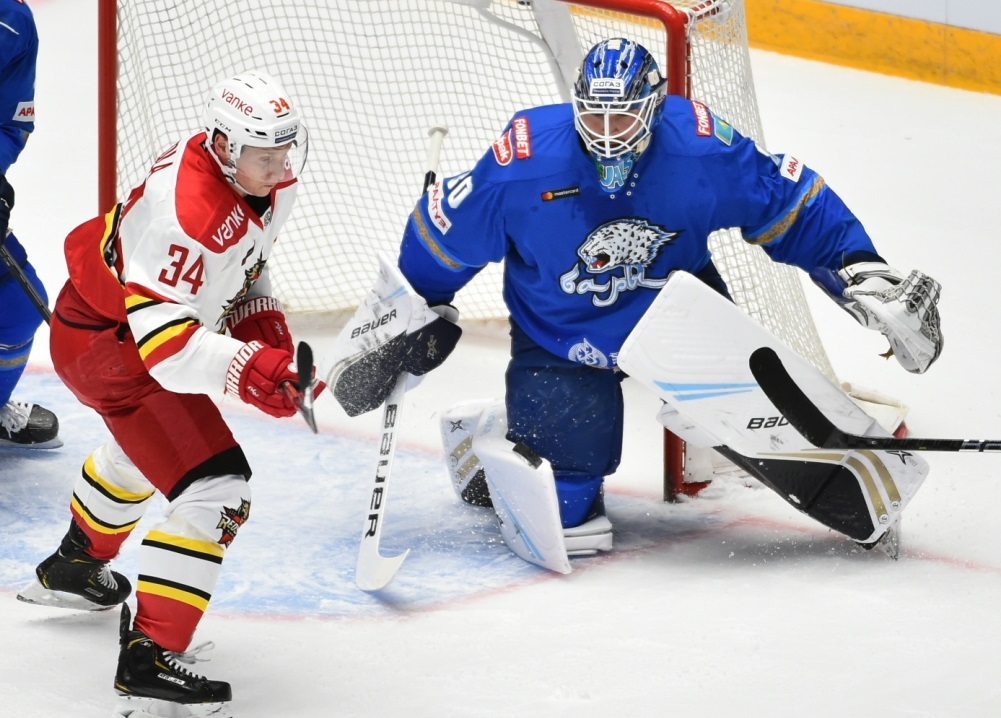 “Tangradi found me in Kazakhstan as well”

In his path towards greatness, he missed the whole 2014-15 season, after being traded to the Washington Capitals. “In 2014 spring, I suffered from a severe injury. I underwent two surgeries, and as a result, I missed 18 months. It was hard for me. I was worried if I could get back at the previous level, if I will gain get a job as a player. Once I recovered, I started working even harder to get back in shape. As a result, this injury only made me stronger.”

And one year later, Pasquale won the Calder Cup as the AHL champion. Oddly enough, he was playing on the same team as his current teammate Erik Tangradi. “It was a fantastic season, but it was tough. We received many players from the Red Wings when the NHL team didn’t qualify for the playoffs. Everyone was happy to win, and we avoided severe injuries. Regarding Tangradi... he’s running behind me for our whole career. First in the OHL, then in Winnipeg, and then again in Grand Rapids. And now he found me in Kazakhstan as well!”

The Canadian goalie didn’t have much information on the KHL before signing. “I tried following the league, but I couldn’t because there isn’t a lot of stuff accessible in English. When I could, I read the news and checked the results. I have a lot of friends in the KHL. When Barys offered me a contract, I talked with Darren Dietz, Jesse Blacker, and Patrice Cormier. All said that Barys is a great way to bring my career to a new level.”

You don’t pick to be a goalie; it’s the role to come to you. When I was a little kid, my skating wasn’t the best; therefore, our coach asked me to try to play on the goal. I played well, and I have been a goalie since that day.

The Kazakh club is now one of the top defenses in the KHL – only CSKA allowed fewer goals. “Such success is due to our system,” Pasquale says. “We tried to play tight defense and minimize the opposition’s attacks. With this approach, you have to sacrifice your offensive game, but considering that we have a fantastic powerplay, it’s worth it. Usually, if we stick to the game plan, we’re going to win.”

Last year, Barys ended the regular season as the second seed of the Eastern Conference. “Naturally, we want to improve. We have a fantastic team, and we have all it takes to get a better result. We have a few players on the injured list, but they are set to return to the ice soon.”

On Youtube, people can easily find some clips with Pasquale fighting in the junior leagues. “I was young and hot-tempered, I didn’t know what I was doing,” the goalie recalls with a hearty laugh. “Sometimes, emotions got the best of me, especially when I was playing at home. Then I grow up, and I understood that it wasn’t worth it. I don’t fight anymore.” 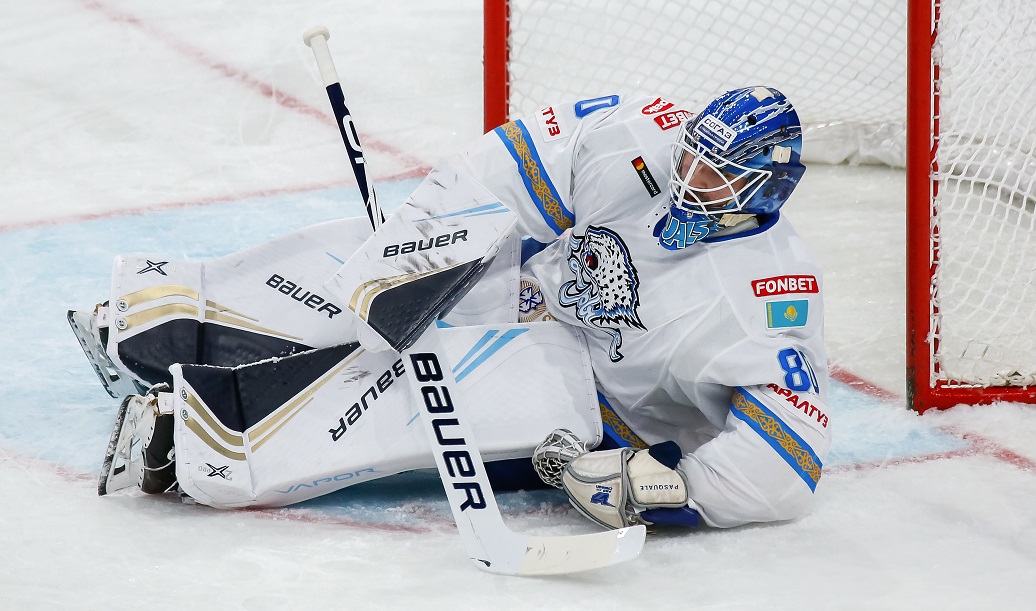 “Our coaches promised me to bring me to fish with them”

Pasquale seems to have settled down comfortably in Nur-Sultan, the newly named Kazakh capital city. “Recently, my parents and siblings visited me here. We walked down the town, visited many attractions, and they were delighted. It’s a young and modern city. People are open and friendly, and you can quickly feel how they love our team. The fan and we are like a family. I can say that I didn’t meet the same feeling in all the teams I played for in North America.”

The goalie had a busy summer. Rumors were running that he got married, and then flew to Kazakhstan the next day to start the training camp. “It’s not entirely true. I moved to Nur-Sultan one week after my marriage. I have no clue how I could convince my wife to adopt such a schedule, but I did it! Brittany is a fantastic person; she understood that I had an excellent opportunity for my career and allowed me to follow my dreams.”

Like any other pro hockey player, time is tight for Pasquale. However, he has his favorite activities. “I love fishing. Two years ago, I bought a small boat, and now I go fishing pretty often. Our coaches promised me to bring me to fish with them; maybe we’ll do it this winter, once the water has frozen. Moreover, I like football and baseball, and I love country music.”