Last week's top forward, Martin Bakos told KHL.ru what he learned in his four seasons in the League, the time he spent in China, Admiral's secrets, his ties with his fellow countrymate Julius Hudacek and much more.

Admiral is now living one of the best starts in its history. The Far East team won 12 of its first 19 games and is now the fourth seed of the Eastern Conference. In October, the team led by Sergei Svetlov had a record-breaking, five-game winning streak. Naturally, such success didn't pass unnoticed, and the KHL awarded Martin Bakos as the week's best forward.

The Slovakian forward isn't in his first year in the league, having played for Slovan, Kunlun, and HC Sochi. He feels like a veteran now, especially if compared with other players. "If we take, for example, Markus Ljungh or other guys at their first year, then I'm a veteran," he agrees. "I already gathered a lot of experience, while the first season is always hard due to the long flights. I started playing in the KHL with Slovan, which is on the other end of the League's geography. Now, I'm again on the edge, but on the opposite extreme. I'm ready to face it now. The club is doing their best to secure us the best conditions. Now, after a few seasons, I know the best things to do when I need to restore myself when I don't feel my legs after a long trip. Markus Ljungh and Shaune Lalonde were worried about it and asked me for some advice. I managed to calm them down. They just need to accept it the way it is. Also, we have a small advantage when we play at home since the other teams have to undergo a long flight before getting to us."

The guys must find themselves something to get busy with to survive the long flights from Vladivostok. "Usually, I try to sleep as much as possible," Bakos explains. "If I am not sleeping, then I am talking hockey with the guys, or we play some Risk. Sometimes I read, but only if I have enough forces."

In 2016, after spending two years in the Czech Republic - and as a fresh Czech Extraliga champion - Bakos moved to China for Kunlun Red Star's inaugural season in the KHL. "Playing there, I thought that now nothing can surprise me anymore," Bakos shares his experience in China. "That season, I learned to move towards my goal without overthinking. The boards tried to do whatever they could for the team, and we knew how hard it was for them. China never had high-level hockey, and many things had to be learned during the process. After that season in Beijing, I am ready for everything, and I don't regret moving there for a season."

After spending the 2016-17 season with Kunlun, the forward moved back to the Czech Republic once again before trying to establish himself overseas, signing a contract with the Boston Bruins. "When you are presented with such a chance, you have to pull the trigger not to regret it later," he says about his move. However, it didn't pan out, and Bakos was back in Europe by mid-December. "The Bruins have a very high turnover rate for their players, they are constantly shuffling their roster. I couldn't find myself in this environment and never got a real chance to play, even if I think I played well in the preseason and spent three weeks with the main team's roster." 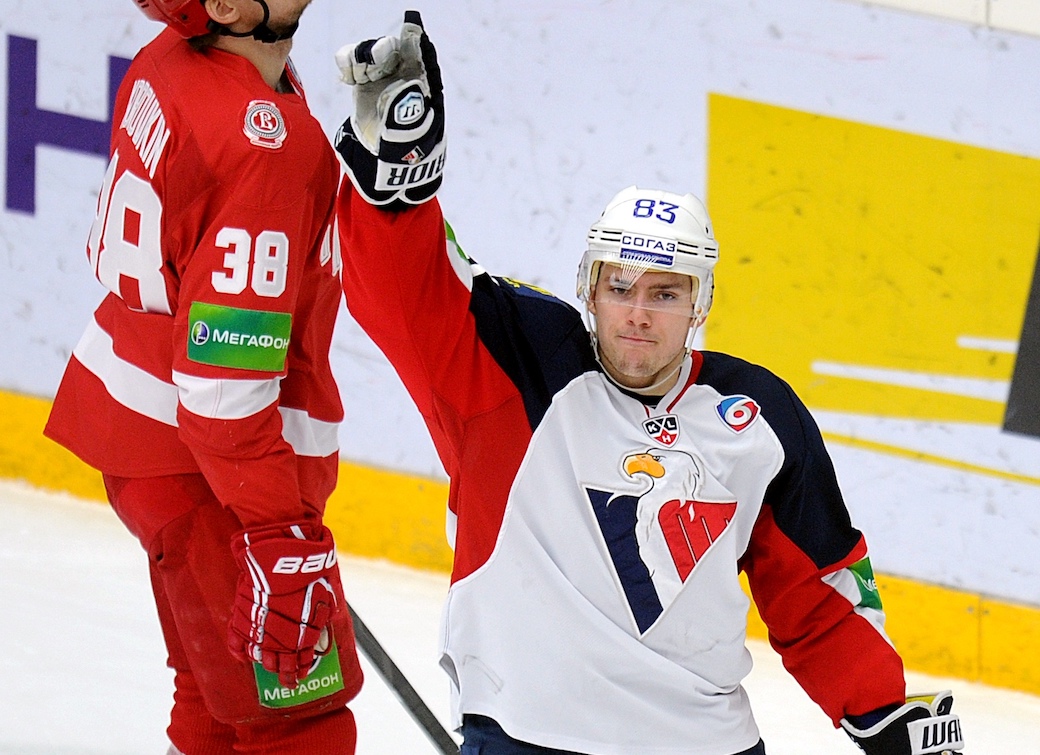 In Boston, he had a chance to meet his legendary fellow Slovakian countryman, one of the most popular defensemen in the world – Zdeno Chara. "He's a great guy," Bakos says. "He offered me to practice together in Summer. Zdeno is a great guy both on and off the ice. He delivered on me such a big hit already on the first practice, but I liked it. I'm not a masochist, I just think that there should be no indulgence even when we are just working out. It's a great way to learn how to set boundaries: we can joke in the locker room, but not on the ice. There you have no friends, other people are just opponents or competitors."

After playing 16 games with the Providence Bruins in the AHL, Bakos returned in the KHL, signing a contract with HC Sochi. "Early on, there were discussions about a new deal there, but this is life. Everything turned out differently, and now I play with Admiral. I perfectly understand that many players are accessible on the market, the competition is always high, and the agents try to find the best option for their players."

Having spent a few seasons in the KHL, naturally, Bakos visited Vladivostok before signing with Admiral. "When I was playing with Slovan, we visited Vladivostok, and I saw that the city was getting a new port. Now I know a lot more about the city. It's one of the most important places in Russia, with a rich history, many interesting points that everyone needs to visit. There is an incredible oceanarium, I suggest everyone visit it if you come to Vladivostok."

Admiral is one of the surprises of the first half of the regular season as it is now the fifth seed in the Eastern Conference. This success is a little surprise, even for Bakos. "We had a great start, and this is something the whole team should be proud of, starting with our goalies. Juho and Krasotkin are playing great, and their game stimulates the entire team. We are a bit surprised ourselves for this success, and I understand those who are surprised, but we are just reaping the fruits of our team's work. If the mechanism works, if we follow our coach's indications, and everyone fights for each other, then we'll have a real chance. We aren't a team with an All-Star lineup. We have a good set of players who are ready to work hard and do whatever it takes to achieve our goals."

October has been great so far for Bakos himself, who is scoring game after game and is climbing the scoring rankings. "I don't know what's going on, maybe I'm just getting old and finally got my acts together?" - the forward laughs. "Seriously, if a team is winning games, it means that all the units are working the right way. We are developing chemistry and improving our behavior in front of the crease. I'm happy that we are playing this way; at the start of the season, my line wasn't working really well."

However, Bakos doesn't feel like he scored a lot of goals. "I don't think I already scored that many goals to pick from," he says when asked what is his favorite goal this year. "I usually enjoy game-winning goals, the ones that most important for your team. But I think I can pick one, the goal I scored against Metallurg. I was a bit lucky at that time. If I score another twenty goals like that, I'll be a happy man."

During another interview, the Slovak told the reporters that Admiral's goal this year is to reach the postseason. Maybe, at this point, the team's goals are set even higher. "Every game we play is to reach the postseason, everyone is fighting for points, after all, to win the Cup you need to get to the playoffs first. We need to go on that way. Just a couple of losses, and you're going to go down a lot. Take, for example, last year with Sochi. We were in seventh place, then we lost a couple of games, and we got down to the eleventh spot. A week later, we were the sixth seed. The competition in the KHL is fiercer and fiercer, there is more parity, and everyone wants to reach the playoffs. We aren't one of those teams who can just say 'Ok, guys, we're doing it right. and let's just keep on playing like that.' No, we must fight every game." 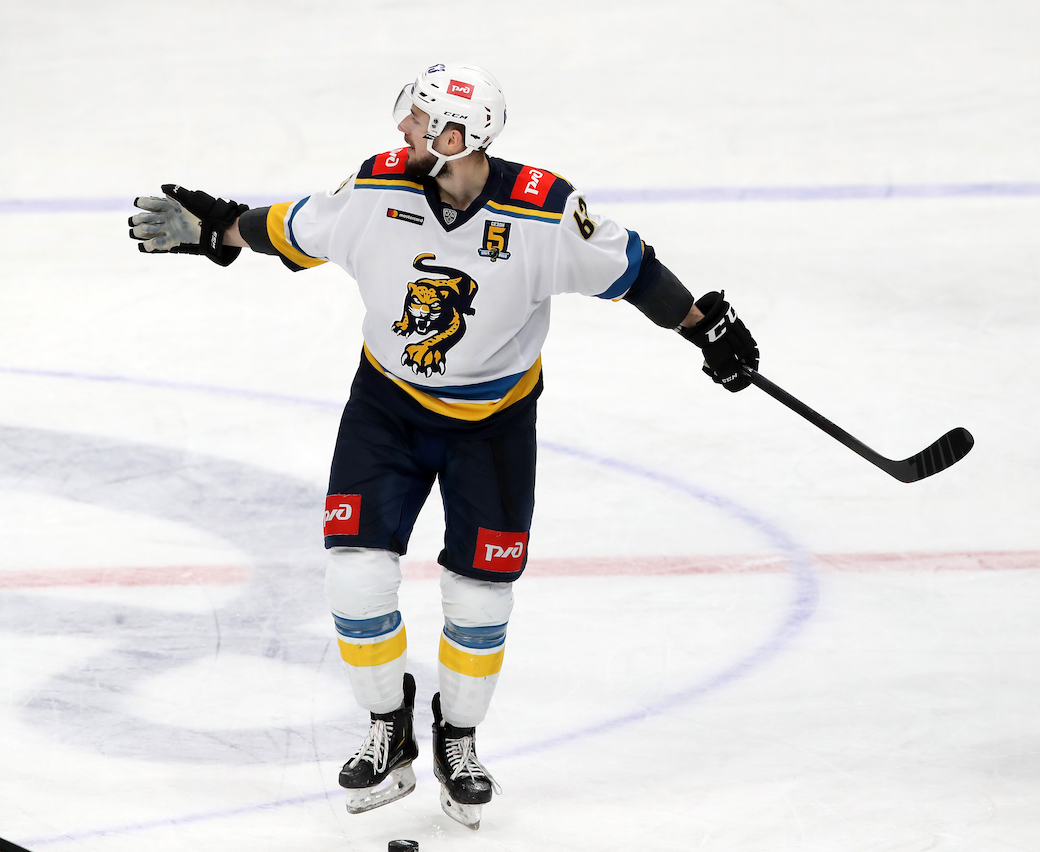 Recently, Martin Bakos was awarded Best forward of the week honors. "I usually read the news through Instagram, but that day I was not," Bakos recalls. "My teammates told me about it. Frankly, my first reaction was something on the lines of: 'What are you talking about? I was the best forward of the week?' In the KHL, there are so many great forwards, Kaprizov is on fire. It looks like he scored as many points as our whole team together. However, the award was a pleasant surprise, something that I was glad of."

Bakos, 29, was born in Spisska Nova Ves, a town in the Kosice region in Slovakia. It's the same town that gave birth to Spartak's acrobatic goalie Julius Hudacek. Unsurprisingly, the two are good friends. "We're always in touch," Bakos confirms. "We write to each other after the games, to encourage or to have some fun. Today, there aren't many of my fellow countrymen in the League, I think we are four. Thus, we need to stay closer." Somewhat ironically, last year, Bakos scored on Hudacek. "We talked about it after the game. I remember that before shooting, I told myself: 'He knows three or four moves I'm gonna pull now, what should I do?' - and then he told me: 'I know three or four of your moves, but you did something not ordinary and tricked me off.' I didn't know what to do, I simply shot the puck, and it went in."