Man of the Week – Philip Larsen

Philip Larsen has been in fine form of late, winning the nomination as KHL defenseman of the week and forming a powerful scoring partnership with Linus Omark. The 29-year-old Dane had his most productive game in the KHL, scoring 2+2 in Salavat Yulaev’s 5-1 win over Torpedo on October 1. That performance also brought up his 150th point in the league.

“I didn’t even know about that until afterwards,” he told the Salavat Yulaev website after the game. “Of course, it’s a nice achievement. When I’m old, I’m sure these are the moments I’ll look back on and remember.”

Philip Larsen’s productive run continued with two more helpers against Severstal in Ufa’s next game, but he’s about much more than just scoring from the blue line. As a first-choice defenseman, he tends to play substantially more than 20 minutes a night and his plus/minus indicator shows that he is a formidable obstacle for opposing forwards. In last year’s playoffs, for example, he clocked +6 in 15 appearances as Ufa reached the Conference final; this season he’s running at +4, consistent on a team that has been somewhat unpredictable. Take out a KHL debut season with a struggling Ugra and his overall tally in the KHL is +22.

Early years: from Sweden to the Stars

Larsen first made an impact as a teenager: aged just 15, he was playing in Sweden’s second tier with Rogle. The following season he made his debut in the Swedish top-flight with Frolunda and helped Denmark’s U20s win promotion to the top tier of IIHF competition. Had it not been for some injury niggles, he would likely have been drafted higher than the fifth round in 2008, when he was selected by Dallas Stars.

The Stars acquired a composed, skilled defenseman with a significant end product on offense. At a time when Denmark was something of an exotic hockey country, his call up was something of a gamble but by 2013, commentators rated Larsen as the sole grain of wheat among the chaff collected by the Stars in 2008. At that time, he was poised to be a key figure as the lock-out shortened 2012/13 made a belated start, and he went on to feature in 32 games. But things didn’t quite work out and a trade to Edmonton represented the beginning of the end. In 2014, he suited up for the first time in the KHL.

Great challenge tomorrow to bounce back on track. @edmontonoilers

Larsen’s first port of call in the league was not one of the big clubs. Instead, the Dane found himself at Ugra Khanty-Mansiysk, a club struggling to make the playoffs. The 2014/15 roster had some quality – a certain Nikita Gusev led the scoring that year, while Larsen was the leading scorer on defense – but couldn’t reach post season. Next came a move to Jokerit, where 36 (11+25) points in 52 games again saw Larsen lead his team in scoring from the blue line. The D-man also went at a point a game during the playoffs.

While all that was going on, Edmonton traded his rights to Vancouver and Larsen took the chance to return to the NHL. Even at the time, he admitted it wasn’t an easy decision. In the KHL, he was getting good minutes each night and playing a leading role on his teams. With the Canucks, by contrast, little went right. Transitioning to a new team took time, then illness slowed his progress. Despite having the confidence of head coach Willie Desjardins, Larsen’s prospects took another painful knock when he was knocked out by a hit from Taylor Hall. It all added up to one of those seasons where nothing went right. Another 26 NHL appearances took his career total to 151, but the chance to return to the KHL was too tempting. 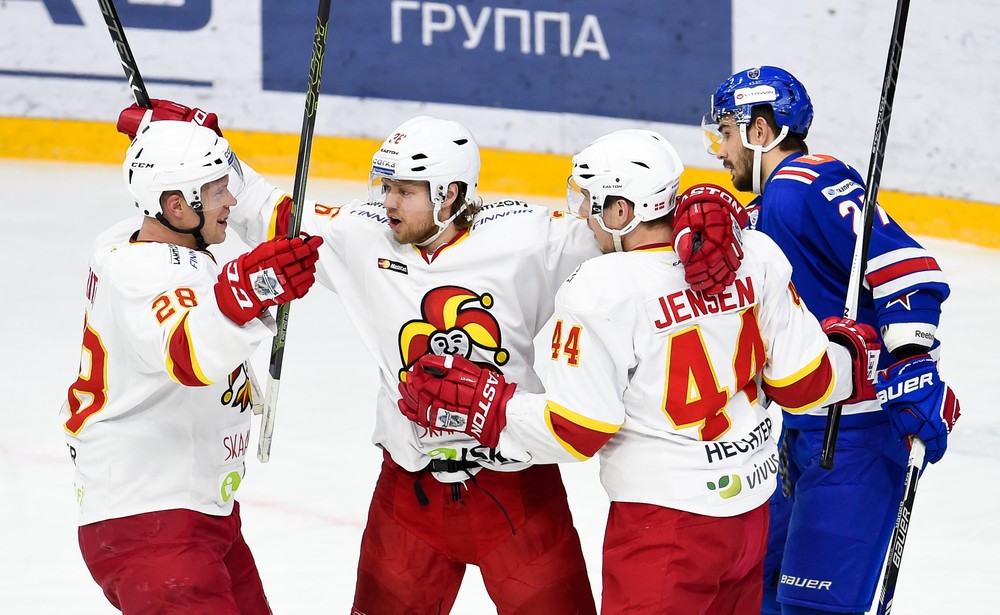 Salavat Yulaev was the next destination – and it didn’t take long to make an impact. In his first season with the team, Larsen was the top-scoring defenseman in the KHL with 38 (11+27) points, a career high. The season also brought his second All-Star call-up, with another to come in 2018/19. Last season, a time of big change in Ufa as Nikolai Tsulygin took over behind the bench, saw more solid scoring in regular season before a strong playoff campaign brought Larsen to the fore again. An important goal in a 4-2 victory over Avtomobilist helped push that series away from the regular season leader as Salavat made it to the last four before losing to Avangard.

Larsen has become a popular figure in Bashkiria, with his own personal fan club flying the Danish flag at games. During that win over Avtomobilist, which coincided with the birth of the player’s daughter, a group of Ufa fans unfurled a banner congratulating the new dad. “I noticed those guys a little while ago, even last year they were there supporting me, flying the flag,” he told the Salavat Yulaev website. “Big thanks to them and all our fans, the support they give us is unbelievable.” 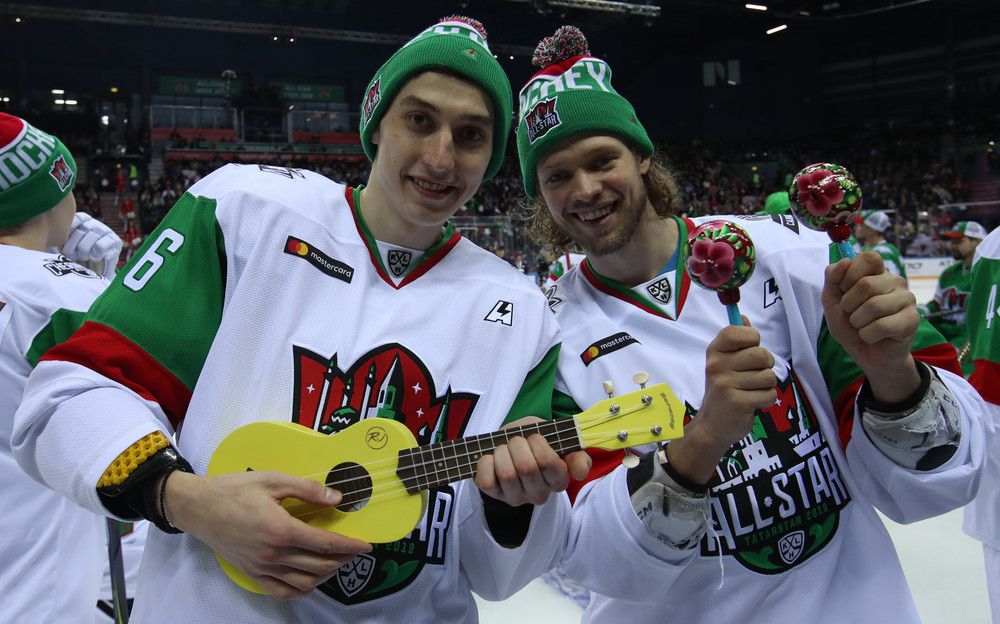 Like many players from emerging hockey nations, Larsen also flies the flag for his homeland. When he was beginning his career, the Danes were clinging precariously to a hard-won place in the IIHF Elite Pool. Today, its an established nation at the top table and hosted the World Championship for the first time in 2018. For Larsen, a veteran of six World Championship campaigns and two more Olympic Qualification events, it was a big moment.

“If you’d asked me about it even five years ago, it would never have crossed my mind [that Denmark would host the World Championship],” he told IIHF.com in the build-up to that tournament. “It was nothing I would have ever thought about, to be honest, but now we’re here.” 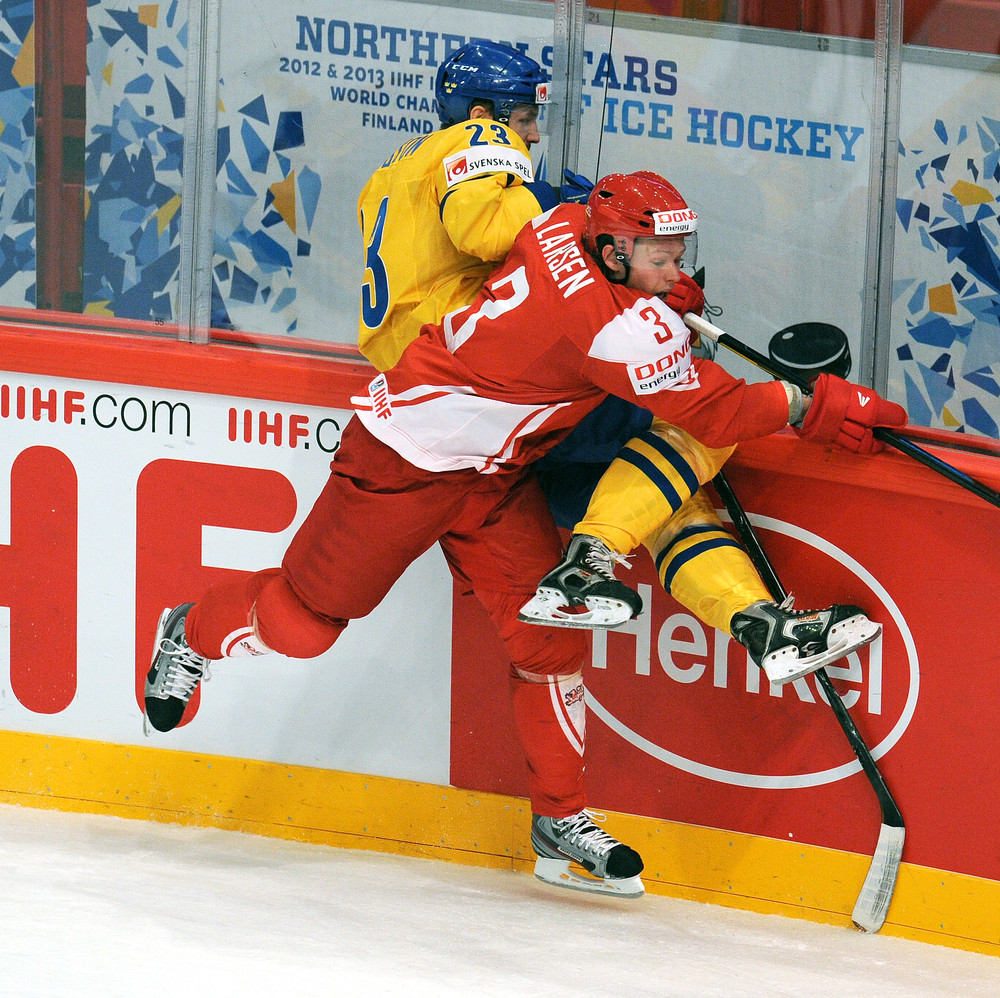