How wide is a hockey rink? Right now, the answer is ‘it depends’. For decades, the distinction was clear. In North America, by tradition, rinks measured a skinny 26m across the ice. In Europe, by contrast, the ice would run 30m from side to side. Players travelling over the Atlantic would debate the challenges of adapting to different dimensions; coaches talked about the premium placed on skating skills or physical prowess depending on the surface in question. It would be wrong to say it was simple – many players found it tough to switch from one to the other and every Olympic Games featured a conversation about which nations might be helped or hindered by the host venue – but the situation was fairly clear cut.

Today, though, things are changing. Russian hockey, which traditionally loved the extra space of the wider rink, is starting to slim down. In the current season, just seven of our 24 teams are playing on the 30m x 60m pad that is the largest permitted under IIHF regulations. Six are using the NHL-style 26m surface and the bulk have adopted the so-called ‘Finnish’ standard, a compromise at 28m. Ironically, the KHL’s Finnish team, Jokerit, is one of the seven still playing on the widest ice. 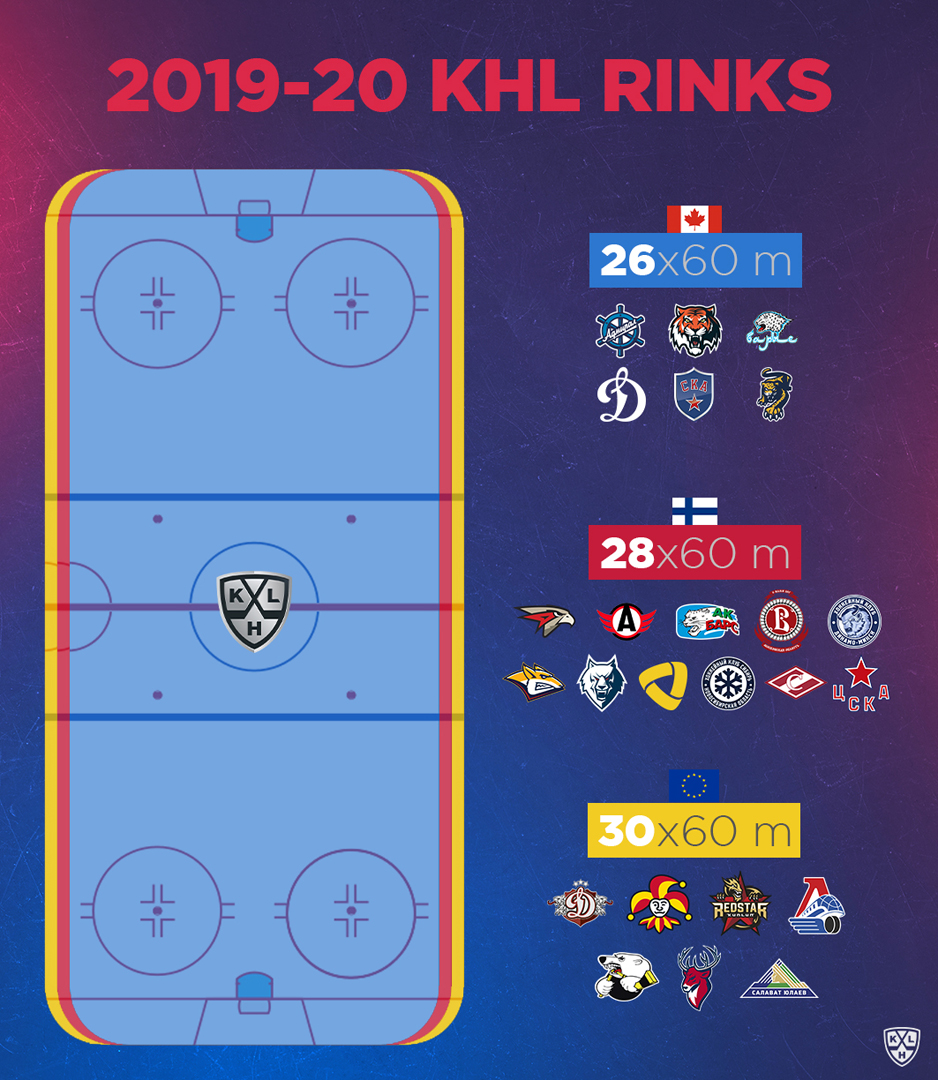 Suddenly, teams face a new challenge: training on one surface then frequently playing on a different one. Goalies talk about different angles as the shots come in from the boards, skaters find they need to be ready for more contact than ever as an opponent is rarely more than a couple of strides away. In the current season, it all adds a new layer of intrigue; the top performers will need to include versatility in their skill sets while fans get to see different styles of play at different arenas throughout the league.

However, this state of affairs won’t last forever. It’s likely to be resolved before the start of next season. The KHL is already looking at ways of ensuring a uniform size across the whole league.

KHL President Dmitry Chernyshenko was asked about the situation before the Opening Cup game at CSKA (where the ice is a ‘Finnish’ 28x60m) and explained what was happening.

“In November we will produce a road map that will lead us towards a uniform rink size,” he said. “The initiative comes from the IIHF, whose regulations allow arenas from 25-30m wide. Right now, some of our clubs are playing on European rinks, some on Canadian, and most on an intermediate size, 28m wide. We understand that smaller rinks bring a different dynamic to the game. Believe me, we are working on this and we will arrive at a uniform size. Unfortunately, it’s not always easy to adapt every rink.” 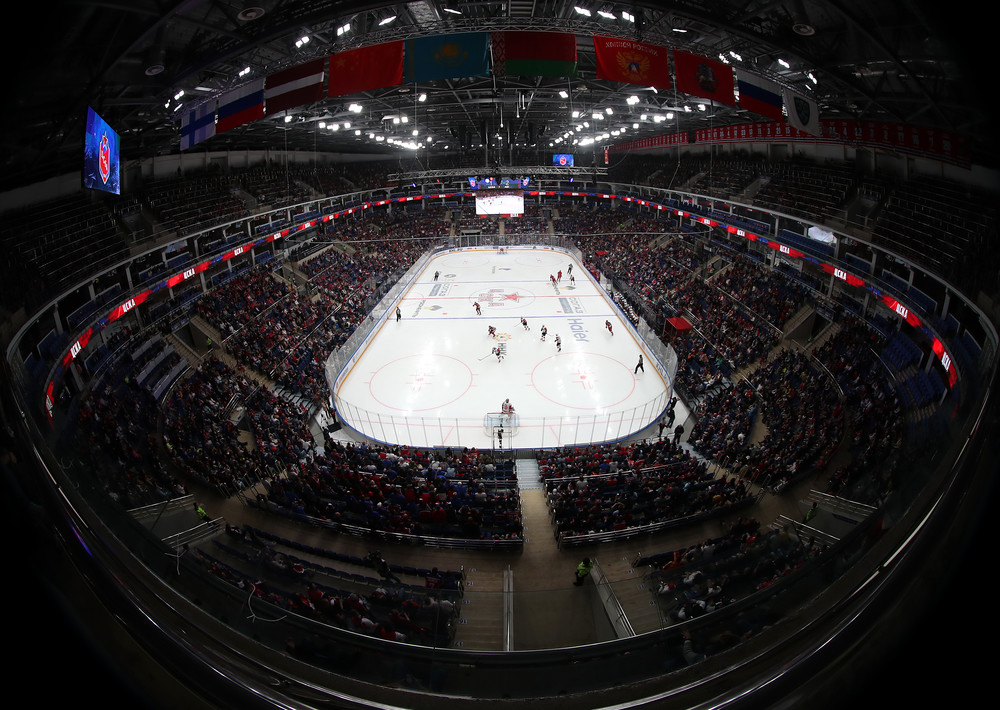 The trend is very much for shrinking playing surfaces. Of the six ‘Canadian’ rinks, four were built in the last decade. Dynamo Moscow moved to its new home last season, Barys got a new arena in 2015, while Vladivostok and Sochi opened their first ice palaces in 2013 and 2012 respectively. Only SKA (opened 2000) and Amur (opened 2007) have arenas that predate the KHL; both clubs have chosen to reduce the size of the playing surface.

At the other end of the scale, several of the arenas using the traditional ‘European’ size date back to the 20th century. Torpedo’s Nagorny Arena was built in 1965, although it was renovated for Elite level hockey in 2007. Jokerit’s Hartwall Arena opened in 1997 and work began on Lokomotiv’s Arena 2000 in the following year. Elsewhere in Russia, with new arenas under development in Novosibirsk, Omsk, Yekaterinburg and Nizhny Novgorod, it seems likely that more clubs will be getting homes that are suited to the smaller ice in the coming years.

For some purists, this is an alarming prospect: the distinctive style of the great Soviet teams, derived from the passing game so essential to success in bandy, has always thrived on the bigger ice. Reducing the available space means there is less room for players to display their skills.

On the flip side, however, a tighter pad increases the speed of the game and delivers more crowd-pleasing hits. Old-school game management becomes harder, since it is more difficult to keep the puck safely away from the opposition and run down the clock while defending a lead. And, whatever the size of the ice, the thrills and spills of top-class KHL hockey will continue to excite an ever-growing audience across Eurasia and beyond. 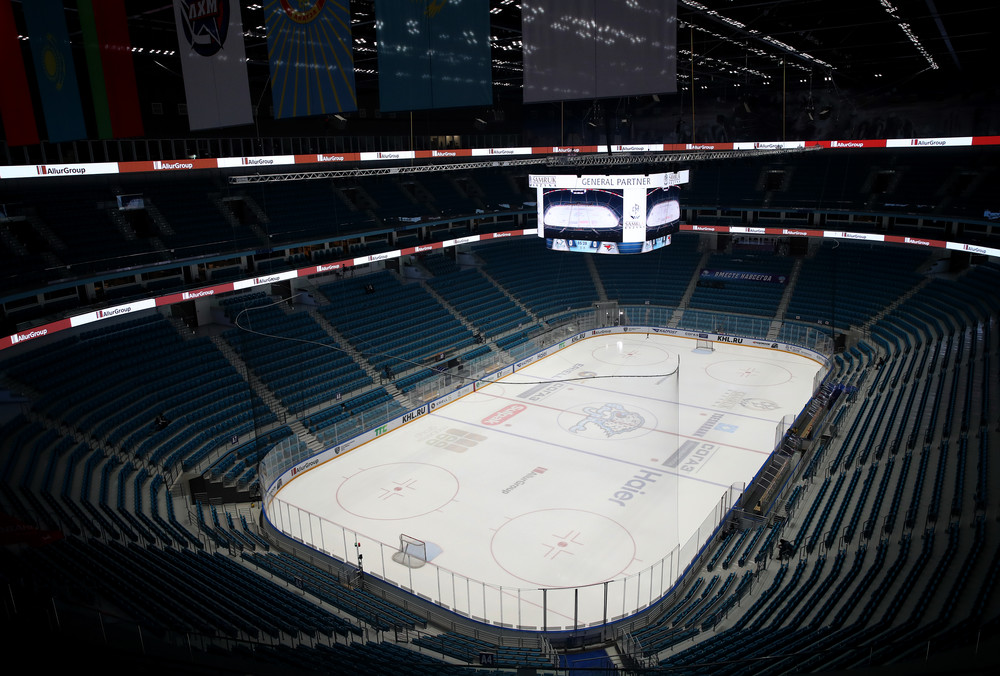