The Department of Refereeing clarified some amendments to the rulebook for the coming campaign.

Following an initial infringement of the face-off procedure, the referee will warn the team guilty of the infraction. The infringement will be shown by an arm bent at the shoulder with the palm of the hand shown to the infringing team.

Explanation: in the coming season, players will no longer be changed following a first infringement at a face-off. Following a warning, the player can return to the draw but faces the risk of a minor penalty if there is a repeat of the offense.

4. A goal is awarded if the puck is accidentally deflected into the goal net. This applies to deflections off the helmet or any part of a player’s body following a shot from any player on the ice.

13. If the goalie is in his crease and the puck goes into the goal net as a result of a shot or a deflection off the stick or body of an attacking player who takes up a position in the goal area before the puck, and whose position does not impede the goalie’s ability to play his position or stop the shot, the goal will be allowed.

Rule 96 – Goals with the skate

1. A goal is not allowed if the attacking player directs the puck into the goal net by kicking the puck. ‘Kicking’ refers to any evident movement of the foot or skate towards the puck.

6. If an attacking skater turns his skate in any manner with the intention of having the puck deflect off it, and the puck enters the goal net as a result of that deflection, the goal will be allowed as long as there was no identifiable kicking motion.

4. Any player on the ice who drops, moves, slides or throws a stick in the air will not be penalized if his actions do not interfere with an opponent (see also Rule 165)

7. A goal should be awarded if the goalie deliberately moves the goal net from its usual position during a one-on-one situation.

Rule 220 – Holding the puck in the goal crease / goaltender

Definition: After making a save, a goalie is allowed to freeze the puck in his goal crease as long as he is being pressured by an opponent. The opponent is deemed to be pressuring the goalie when an attacking player is moving towards the goaltender in the defending team’s half of the ice. If the goalie is not being pressured and has time to make a play safely to a team-mate, he is obliged to do so. 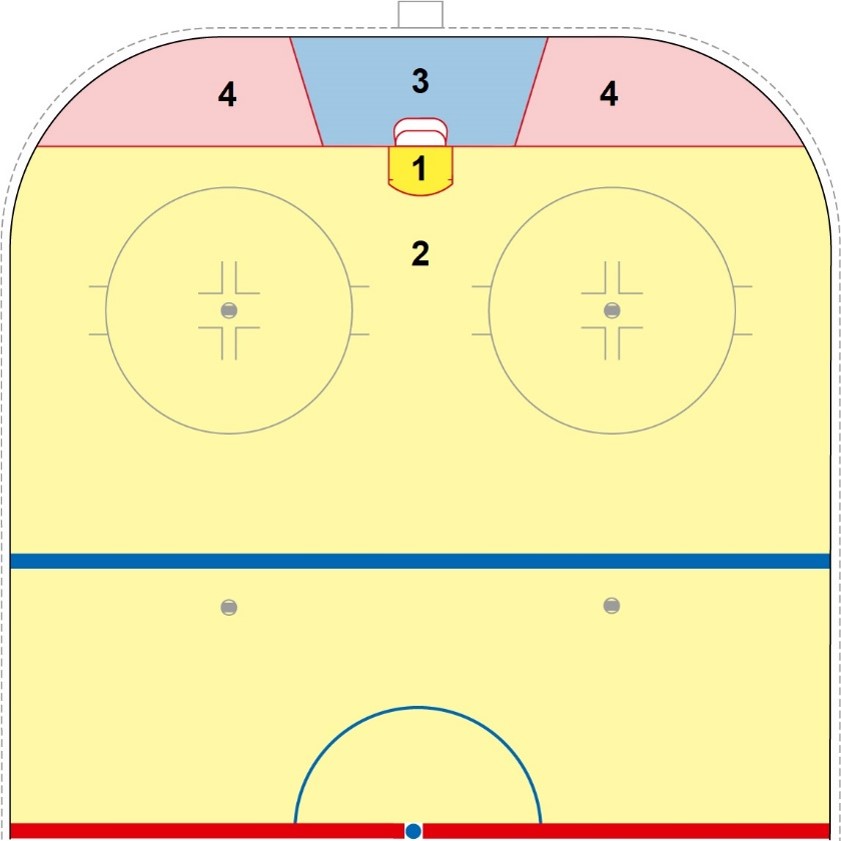 1. Unless he is being pressured by an opponent, a goaltender who holds the puck for more than three seconds will be assessed a minor penalty.

2. A goaltender who is not under pressure and deliberately drops the puck into his pads, body or equipment in order to gain a stoppage in play will be assessed a minor penalty.

Rule 221 – Holding the puck outside the goal crease / goaltender

Definition: the goaltender is not allowed to fall on the puck to force a stoppage of play in certain situations after leaving the goal crease.

1. If the goalie remains in contact with the goal crease (area 1 in the above diagram) then he is permitted to play the puck, catch the puck or freeze the puck even when it is outside the goal crease, as long as he is under pressure from an opponent. If the shot originated in the opposing team’s half and the goaltender’s actions resulted in a stoppage in play without assessing him a minor penalty for delaying the game, the team that infringed the rules will not be allowed to change its players. If the goaltender is assessed a delaying the game minor, his team will be allowed to change its players before the game restarts.

Game situation 1: a goaltender catches the puck while standing in his goal crease. He then decides to continue the game and leaves his crease, placing the puck on the ice as he goes. Realizing that it is not possible to safely continue the play, the goaltender then freezes the puck and causes a stoppage in play. In this instance, a delaying the game penalty must be assessed.

2. If a goaltender leaves his crease to stop a shot within area 2 of the above diagram, and then catches or freezes the puck, or causes a stoppage in play by any other allowable means, he will not be penalized if he is under pressure from at least one opponent. Catching or freezing the puck in area 3 of the above diagram is also permitted, providing the terms of Rule 221, paragraph 1 are met.

3. If a goaltender leaves his crease in an attempt to reach a loose puck before an opponent and freezes the puck instead of playing it, a minor penalty will be assessed for delaying the game. This applies in area 2, regardless of whether he is under pressure from an opponent or not.

4. A goaltender in area 3 (the so-called trapezoid zone) can play the puck or catch the puck, but he must immediately throw it on the ice. He is not allowed to hold the puck in his hand or glove for longer than is necessary to drop it to the ice. The position of the puck is the determining factor.

5. If a goaltender in area 3 holds the puck in his hand or glove, or freezes it against the ice, the goal net or the boards, he will be assessed a minor penalty for delaying the game. The position of the puck is the determining factor.

6. If a goaltender in area 4 (beyond the icing line and outside the trapezoid zone) plays the puck in any way he must be assessed a minor penalty for delaying the game, regardless of whether or not he was pressured by an opponent. The position of the puck is the determining factor.

7. When the puck is shot from the opposition’s half and the actions of the goaltender lead to a stoppage in play without him being assessed a delaying the game penalty, the team that infringed the rules may not change its players until play has restarted. If the goaltender is assessed a penalty, both teams may change their players before the restart.