Timur Shiyanov: “In Russia I’ll have bigger chances to develop”

In this offseason, Vityaz signed several new players, with the young Russian goalie Timur Shiyanov being one of them. The netminder started playing in Russia, then at age 10, he moved to Switzerland. In this interview for KHL.ru, Shiyanov told us about his path towards the world of professional hockey.

«The right persons will always help you progress further»

Not so many players move from Switzerland to Russia, and Shiyanov’s return after ten years is somewhat surprising. “We thought that in Russia I’ll have bigger chances to develop,” Shiyanov explains his move. “I already lived in Russia, and I know everything. I played for CSKA when I was a kid, I played for the different junior national teams. To me, it was imperative to be always in front of the junior national teams’ coaches as I’m ready to do whatever it takes to get to the upcoming WJC in the Czech Republic.”

After playing for the Lausanne HC organization in the Swiss junior leagues, Shiyanov signed a two-year contract with Vityaz. “Several teams were interested in signing me,” the netminder explains. “We had to find the optimal solution. That is a team where I can develop and play. I have the chance to play in three leagues, in the KHL, the JHL, and the VHL, and all is up to me now. To win a spot in the senior team, I first need to impress the coaches at the camp, and then during the season. I know that in Vityaz Russian young goalies are treated well, as Igor Saprykin and Alexander Samonov show. I am delighted with it because I think that the competition for a spot in the lineup makes you stronger and give you extra motivation.”

Shiyanov’s career path is a bit different from other Russian players. “I started playing hockey when I was four, I started playing for CSKA,” and here it seems like a usual history for a young Russian. “A bit later, we moved to Switzerland. There we found a great coach, Sébastien Beaulieu, a Canadian with whom I work for ten years already. He works for both Geneve-Servette and Team France. I’m grateful to him for what he did for myself, he taught me so many things and always supported and motivated me. It’s vital to always find yourself into a good circle of persons who can push you forward. The right persons will always help you progress further.”

«You always need to have a plan B»

Timur’s adventures don’t limit to Switzerland. He also played in North America. “When I was 13, I moved to Canada to play for the Notre Dame college,” he explains. “I spent two seasons there and gathered incredible experience. It was an unforgettable time. I lived in a dorm without my parents. There was another Russian guy who still plays overseas. We also had to study. We were the only ones to get up at five in the morning and go to the gym when everyone else was still sleeping. In Canada, I rapidly understood that you need to have a professional attitude every time you practice. Moreover, I also studied French and English languages. I am grateful to my parents for giving me this chance. After it, Lausanne offered me a contract, and I played there the latest few seasons.”

Shiyanov wasn’t scared by moving yet another time to a new country. Quite the opposite. “It would have been bad if I didn’t know the languages. As I knew them, I settled there quite fast,” Shiyanov recalls. “You have a chance to understand that no one is going to force you to work and that you need to do everything on your own, without your parents. That move was very important also for my education, you always need to have a plan B if your career in hockey goes nowhere. It wasn’t easy, but the faster you grow, the faster you understand things.”

After his contract with Lausanne run out, he had chances to remain in Switzerland, but he decided to move on. “Of course, I had offers in Switzerland, and the team tried to sign me to a new contract,” Shiyanov explains. “However, I decided that I needed to move on. In the KHL the players are no worse than in the NHL. Becoming a starting goalie in the KHL is not only my dream but also a real goal towards which I spent so many years. Many say that hockey players have no childhood. It’s true, but if you want to reach something, you must find compromises. I’m very grateful to Vityaz for the chance, but now it’s all up to me.”

«Russian hockey is developing at all levels»

The young goalie is eager for the new season to start so to open a new chapter in his life. “I always wanted to become a professional hockey player,” Shiyanov confirms. “I was always very professional, and I started acting this way since my childhood. Right now, I am feeling incredible positive emotions. I know that I haven’t lived in the country for long years, but I always visited Russia in summers. Russian hockey is developing at all levels, and I’ll have a lot to learn.”

Of course, some of Shiyanov’s teammates made it to professional hockey as well. “It will be interesting to meet the guys with whom I started playing. I remember that once when I was with the U18 national team, Dmitry Samorukov and Ivan Muranov approached me and asked whether I used to play for CSKA. At those times, I was playing with players one year older than me, thus I know them all, including Vityaz’s new signing Pavel Koltygin.”

Differently from other guys, Shiyanov doesn’t come from a hockey bloodline. “My father always wanted to play hockey, but didn’t have the chance,” Shiyanov says. “I remember that he was always watching hockey when I was a kid, I was just watching at the goalies. And one beautiful day, he asked me if I wanted to become a player myself. I didn’t think twice, and I told him that I wanted to be a goalie. I took the stuff, the stick, and went studying. Alexander Suchkov put me on skates, and he now has a private goalie school. I am grateful to him, who also taught me that the more I give, the more I’ll get.”

We may even find another Shiyanov soon on the Russian rinks. “My little brother also plays hockey,” Shiyanov shares his excitation. “He has a big advantage. He now has someone close who can explain to him the right attitude and how to work. I’ll try to help him and show the right technique. I am sure that he has a great future in front of himself.” 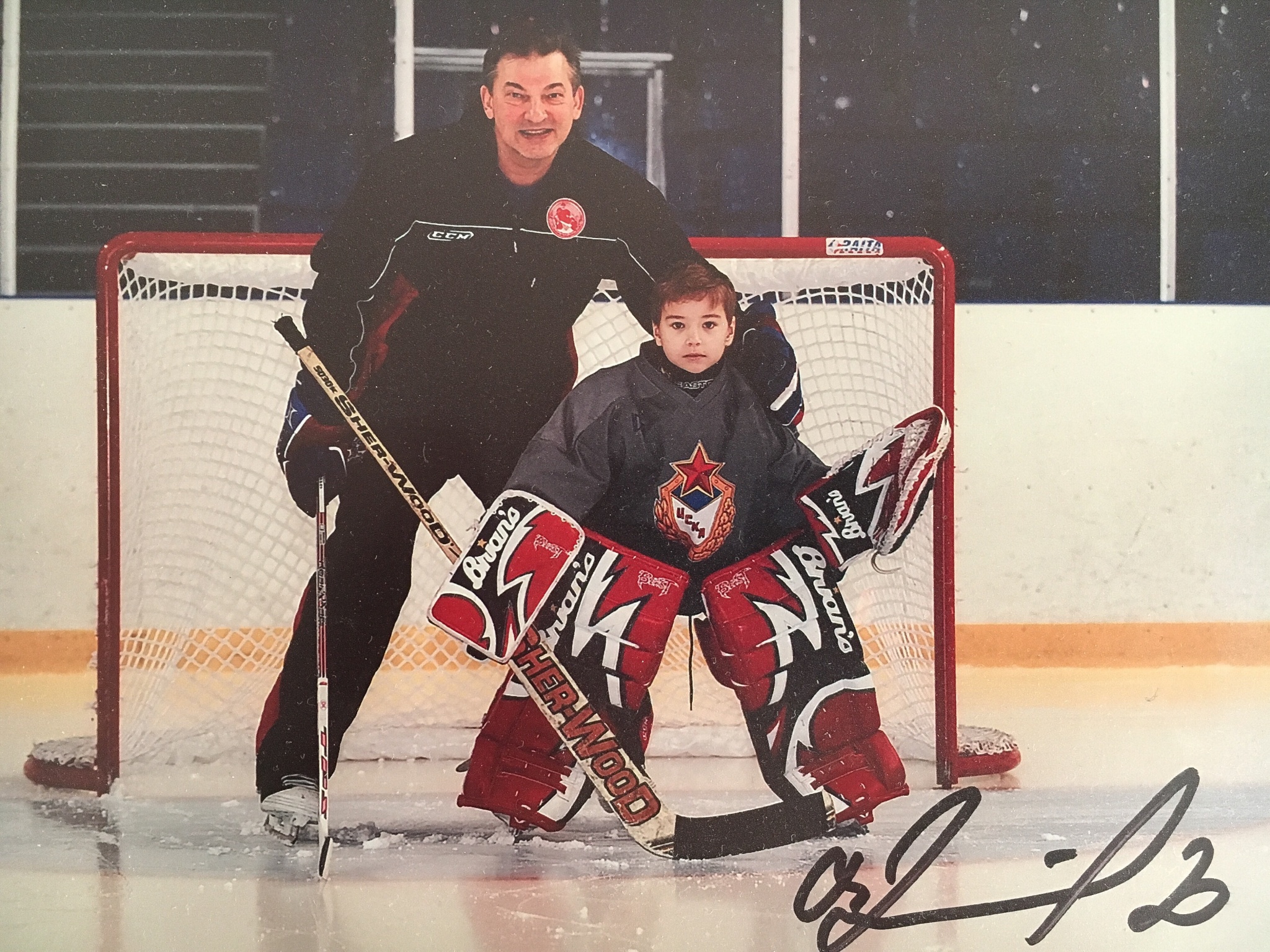