The Sledge Hockey Continental Cup, jointly organized by the KHL, the Russian Paralympic Committee and the Russian Federation of Sports with People with Physical Impairments, concluded on Tuesday with more emphatic success for Russia’s teams.

The ‘A’ team celebrated first place in the competition with another emphatic victory to complete its three games without allowing a single goal. Russia’s ‘B’ team, comprised of reserves for the national team, secured second place with an 8-1 victory over Germany earlier in the day. Overall, the tournament showed that, despite almost three years without international action, Russia remains one of the strongest nations in Europe and stands a good chance of returning to the Elite Pool after November’s World Championship.

Tuesday’s first game saw Russia ‘B’ take on Germany, with the winner destined to take second place in the four-team tournament. The Russians had a slight advantage going into the game – they had beaten Slovakia in regulation, while the Germans needed a shoot-out. However, the previous outing had seen Alexander Sidorkin’s team lose 0-5 to Russia ‘A’ and the head coach promised a very different performance here.

Those words were backed up by actions. A few small changes to the line-up brought Sergei Makarov into the first line and Dmitry Kozlovsky back in goal, and from the opening exchanges the Russians took the game to Germany. A couple of early goals took the game away from Germany and chased starting goalie Klaus Brzoska from the net to be replaced by Simon Kunst. The Germans rallied, pulling a goal back, but were then hit by a triple blast late in the first period. The third goal, in particular, caught the eye: a great combination between two 19-year-olds, Mikhail Voronchikhin and Vladimir Rychkov. The latter, who celebrated his 19th birthday today, has already been identified as a star of the future.

Rychkov underlined his potential with a goal of his own in the second period to help his team into a 7-1 lead. The final stanza, with the game already won, brought just one more goal when Almaz Nafikov found the German net late in the game. Rychkov’s birthday could hardly have gone better. 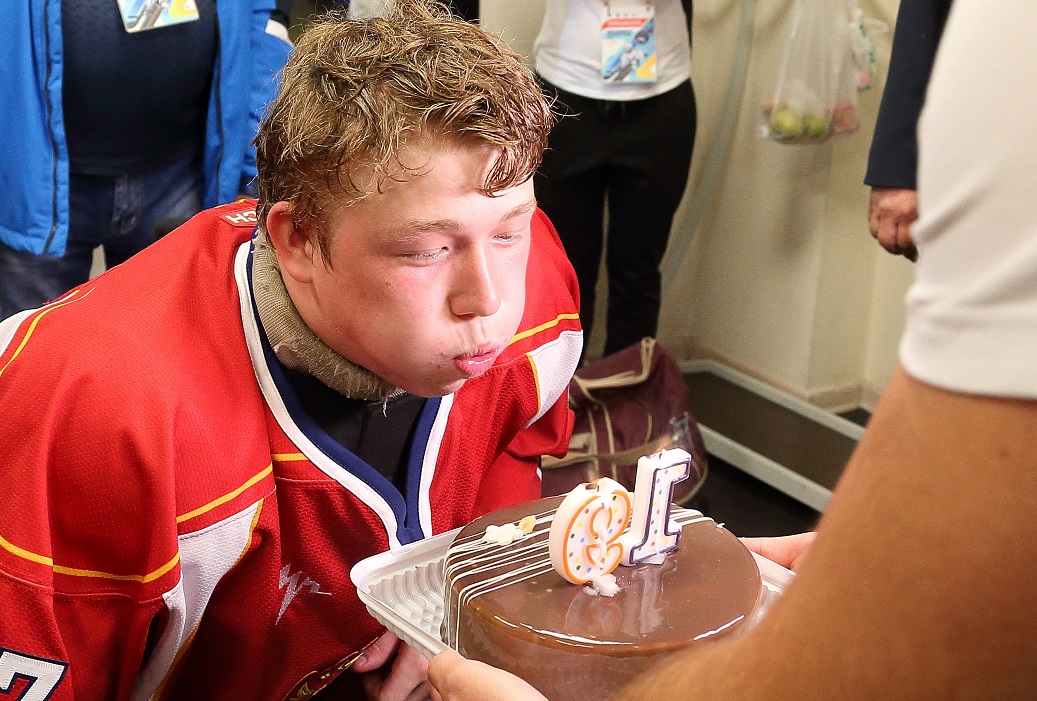 “This tournament was at a really high level and I especially enjoyed playing against Russia’s first team,” Vladimir Rychkov said after the game. “Those are experienced players, and going up against them taught me a lot even if we lost the game. I’ve never had a game on my birthday before and then to score in a tournament like this was even more special. Hearing those congratulations in the arena was something I could never have imagined. Thanks to the organizers and the team, it’s been really emotional.”

“Today we had two full lines and that could hardly fail to influence the outcome of the game,” said Russia ‘B’ head coach Alexander Sidorkin. “Plus we had a day off before this so the guys were able to get back into condition before this last game. Looking at our players, at least four – Voronchikhin, Rychkov, Nafikov and Maletsky – are ready to go to the first team and should go to Beijing as part of the main squad.”

“It was a very tough game, our defense made too many errors but, despite the final score, I think we managed to give Russia something to think about as well,” said German goalscorer Bernhard Hering. “This tournament is a useful staging post for us, it showed how our opponents are preparing for the World Championship. Now we’ve made that first step in our preparations.

“And I have to say something about the organization of the tournament. On the off day we had an excellent cultural program, we got to see the city. It’s been great here, the people have been so welcoming and, if we get an invitation, we’d love to come back next year.”

Russia ‘A’ – 17 unanswered goals against Slovakia

Russia’s first team came into its final match with the title already assured and took on a Slovak team with just one point from its shoot-out loss against the Germans. Few doubted that Ruslan Batyrshin’s Russia ‘A’ would fall short in this game; most were curious as to whether the team could extend its shut-out streak through the whole tournament.

The game drew a good crowd for sledge hockey and throughout the game the players could hear cries of support from the tribunes. Everyone who came to the game had the chance to get a photo with the trophy, which was on display in the foyer before the puck was dropped.

Slovakia’s resistance lasted just five minutes before the floodgates opened and goals began to fly into Eduard Lepacek’s net. In each game of this tournament, a different forward has come to the fore for Russia and this time it was Ilya Volkov’s turn. He opened the scoring, potted a second a couple of minutes later and by the end of the second period he had scored four as Russia leapt to a 9-0 lead.

In the third period, Russia was rampant, scoring almost at will. It was clear that this team was a class above its opponent and the final outcome was the most convincing victory of the tournament – a 17-0 scoreline that saw Russia ‘A’ finish with an impressive 31-0 goal differential in its three games.

After the game came the presentations. Dmitry Lisov (Russia ‘A’) was nominated best forward, Alexei Lysov (Russia ‘B’) won the best defenseman prize and Germany’s Simon Kunst was chosen as best goalie.

“Yes, today went really well,” said Ilya Volkov after game. “But everything depends on the quality of the service and in the end, it didn’t have that much to do with me. I wouldn’t say that Slovakia was such a weak team but today for some reason they struggled. We have played before and I can’t remember such a lopsided score. Maybe they didn’t have their strongest roster, plus they weren’t as well-prepared physically.

“We couldn’t really feel sorry for them, though. We have our tasks, we need to prepare, to get our lines working, to find that chemistry. We’ll need all of that later, when we have tougher games. In short, we tried to do what the coaches asked. There was no requirement to score so many goals, but there was a need to get used to playing together. I hope we achieved that.

“I’d also like to say a few words of thanks ot the KHL and the Paralympic Committee for the way everything was organized here. To the league, in particular, for setting up online streams of the games. That’s not something that happens for us sledge hockey players very often. It means that anyone who wanted to could watch the games, see our team.”

“Russia is a classy team with really skilled players,” said Slovakia’s captain Marian Ligda. “Of course, they should be playing in the top group. The Russians outplayed today in all areas, the scoreline speaks for itself. I guess we didn’t manage to prepare properly, we didn’t set up as well as we did against Russia ‘B’ earlier in the tournament. We just need to accept that we fell short today.”