Day two of the Sledge Hockey Continental Cup saw Russia’s first team secure victory in the four-team tournament in Sochi. Sunday’s early game saw Germany defeat Slovakia in a shoot-out, meaning that the winner of the derby clash between Russia ‘A’ and Russia ‘B’ would be in an impregnable position if the game was settled in regulation time. In the event, Russia ‘A’ took control from the start with a first-period hat-trick from Dmitry Lisov paving the way for a comfortable win.

Germans edge to victory in a shoot-out

The first game of the day saw Germany face Slovakia. Both teams had lost out against the Russians on Saturday. Germany went down 0-9 to the first team, while Slovakia was beaten 1-0 by the seconds. For both teams, victory was vital if they were to maintain hopes of winning the tournament.

The Germans went in front midway through the first period and generally had the better of the game despite enjoying less recovery time after Saturday’s exertions. Slovakia did not give up after falling behind and after a goalless second period came a fight back. Early in the third period, the Slovaks got their first goal of the tournament to tie the scores. Then the teams traded goals late in the game. Sebastian Disweld put Germany back in front only for Slovakia to call a time-out and get back into the game with little over two minutes left to play. We were off to overtime for the first time in the tournament, and then to a shoot-out. Germany took the verdict: Felix Schrader scored with the first attempt and the goalies stopped everything else that came at them. 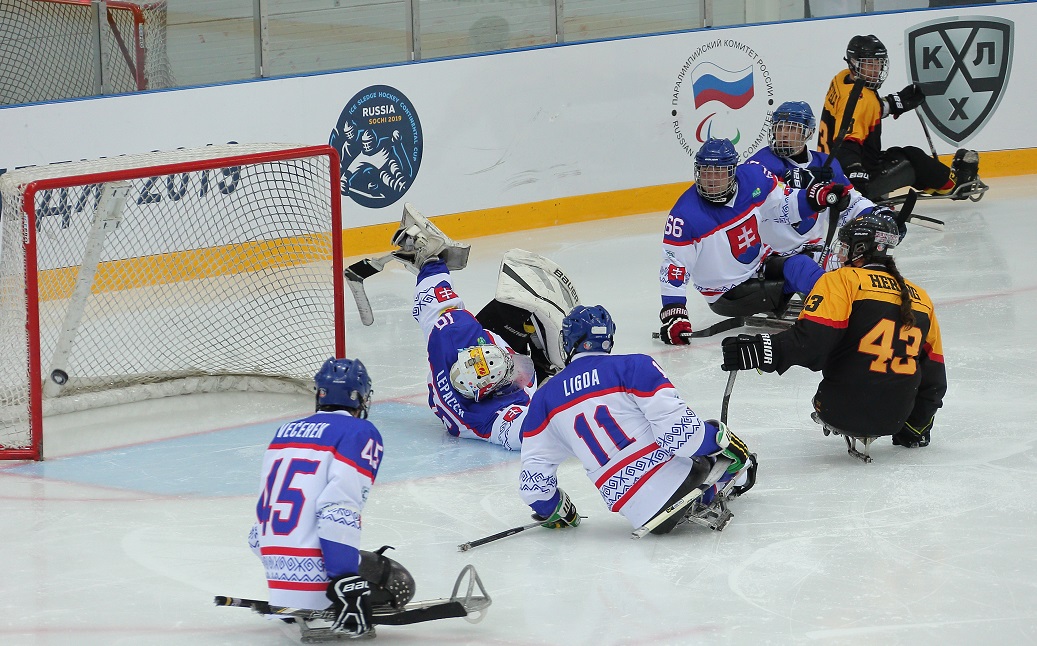 “The level of international sledge hockey gets stronger with every passing year,” said German forward Ingo Kuhli-Lauenstein. “Russia and Canada, of course, are a level above us, but Slovakia are very much our peers. That’s why it’s great that we managed to get the victory in this highly competitive game. That really boosts our confidence. Sure, we had a heavy loss against the Russians yesterday but thanks to the excellent organization of this tournament we managed to fully recover and come out today in great shape.

“As for losing 9-0, like I said, Russia is stronger and we had limited opportunities to practice on the ice, it’s expensive to hire an arena in Germany. So we could only work in the training hall. So this tournament in Sochi, at such a high level, means a lot for us in terms of preparing for the World Championship.”

“This loss really hurts because it was an even game,” said Slovak defenseman Slavomir Ferecik. “Twice we came back to tie the game, but the shoot-out went against us. If we talk about the organization of the tournament, then I can say that I’ve never seen such a high level of organization in sledge hockey. We always feel at home in Russia. In particular, it’s great to be here in Sochi’s Olympic Park, it’s a famous place in our sport. It’s my first time here and I’m struck by the scale of it. In Slovakia we don’t have any sports facilities like this. We still have to play Russia’s ‘A’ team here, and they will clearly be the favorite in that game. But we will defend hard and try not to allow as many goals as the Germans.”

Dmitry Lisov – a hat-trick in the first period

The game between Russia’s ‘A’ and ‘B’ teams was the key to the championship. After Germany and Slovakia shared the points in their earlier game, Ruslan Batyrshin’s team could secure top spot with victory in regulation time and wrap up the Continental Cup title inside two days.

Prior to the game there was some interest in the rosters – would anyone from the ‘B’ team get a ‘promotion’ to the ‘A’ team for this match-up? In the event there were no changes. The only difference was that both went with new goalies. Russia ‘A’ started the game with 2014 silver medallist Vladimir Kamantsev and Russia ‘B’ had Andrei Kasatkin.

The ‘A’ team immediately established its superiority in the game, but it wasn’t until midway through the first period that it was able to turn pressure into goals. Before that, the ‘B’ even threatened to cause an upset, with a good chance falling to Igor Maletsky, scorer of the only goal in Saturday’s game against Slovakia. But, after six minutes, everything began to fall into place for the senior squad. The pace and sweep of Russia ‘A’s attacks proved too much for the opposition, with Dmitry Lisov leading the way. Oddly enough, the team captain had not found the net during the big win over Germany, but he put that right today in style with a hat-trick in the opening stanza. The game finished 5-0, and Russia ‘A’ romped to victory in the Continental Cup. 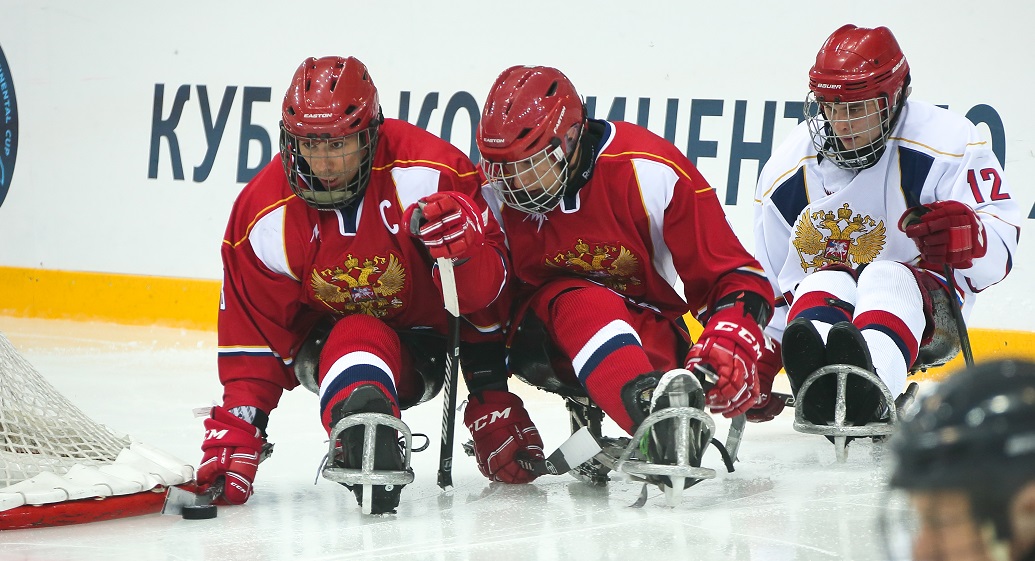 “Even though we were playing against our team-mates today, we wanted to make sure that the strongest team won,” said hat-trick hero Dmitry Lisov. “That’s why you saw such a hard battle. We, I hope we didn’t go over the top at any stage. I wouldn’t say that our ‘B’ team was weaker. Today we won because we were better prepared, maybe because we wanted it more. My goals? The team did everything for me, I just had to get my stick in the right place. I’m really happy I could do that.”

“Our task was to score goals and stay out of the penalty box. We managed to do some of it but didn’t managed with others,” commented head coach of Russia ‘A’ Ruslan Batyrshin.

“Yes, it was a hard game, the guys picked up penalties for rough play, but that’s down to emotion. The youngsters are trying to break into the national team and the veterans don’t want to give up their places. That’s fine, it’s a struggle, competition for places. Even though we’ve already won the cup, that will have no bearing on our preparations for the game against Slovakia. We have a plan and we will carry it through.”

“We are the reserves and we need to prove that we deserve a place in the first team alongside guys who have already played together for a long time,” said Russia ‘B’ forward Roman Severin. “Plus the players themselves were stronger than us. We made a few mistakes and made it easy for them to get the puck, so we allowed three goals in that first period. Of course it hurts to lose without even scoring, we should have got at least a couple of goals and we had the chances for that. Overall, I’d rate this a ‘C’ grade.”

“I said before that several players on our team hadn’t trained for quite a while before this tournament, while the ‘A’ team had the chance to come here to Sochi for a week,” said Russia ‘B’s head coach Alexander Sidorkin. “In the event, mistakes that came from lack of preparation – including goaltending errors – cost us three early goals. Nonetheless, I’m happy that there were times when we gave them a real fight. We showed that there is depth to Russian sledge hockey, we have guys who just need more opportunities to practice. As far as the tournament goes, tomorrow is a rest day which gives us a chance to practice and prepare for the last game against Germany. I can promise that we will play a very different game in that one.”

Standings (after two games each)