In Slovakia, the IIHF World Championship ended the group stage. KHL.ru analyzes the performance of its players in the tournament.

In spite of winning only one game, the Danes had a decent showing at the WC, even if they didn’t manage to get to the quarterfinals, ending the tournament in the sixth position in Group A. Jokerit’s Nicklas Jensen is one of the most dangerous scorers in the KHL and on the international stage he was as fine as he was the team’s third most prolific player with two goals and as many assists in seven games. Peter Regin brought his usual leadership to Slovakia and wore the “C” for Denmark and contributed with one point. Oliver Lauridsen was a crucial player in Denmark’s defense, finishing the tournament with a plus-2 rating – not bad for a team who won only once during the tournament. Former Jokerit defenseman Jesper Jensen also contributed to the team with two assists – including the helper on the team’s game-tying goal in the last game against Slovakia – but Finn fans are going to miss him as he is signed in Sweden for the next season.

Defending home soil, the Slovaks tried very hard but missed the playoffs as they finished in the fifth position in the Group A’s standings. Former Slovan player Matus Sukel was the team’s top goal scorer, with five tallies in seven games. After a strong season in the KHL, Sukel moved on signing with Sparta Prague in the Czech league. Young Slovan forward Adam Liska keeps on impressing. After a solid rookie season in the League and a strong WJC campaign, the 19-years-old winger scored two goals and added an assist at his debut at the adult WC. The other two Slovan forwards – David Buc and Mario Lunter – didn’t score but appeared on the scoresheets as they produced three and two points respectively. Dynamo’s Michal Cajkovsky scored twice and finished the tournament with a plus-2 rating. On other news, former KHL journeyman Ladislav Nagy called it a career a few days before turning 40. In the League, he scored 123 points in 230 regular season games with Severstal, HC Lev, Dinamo Minsk, and Slovan.

The Latvians were very close to getting a quarterfinals spot, but in the end, had to surrender to higher-rated teams as the Czechs or the Swedes. Miks Indrasis and captain Lauris Darzins were among the key players for Team Latvia. Dynamo Moscow’s forward scored three goals and four assists to become the team’s second scorer in the tournament, while the veteran Dinamo Riga forward had one helper less than his former teammate and ended the WC with six points. At his debut at the WC level, forward Rihards Marenis scored two goals, including the 3-1 goal in the critical game against Team Norway, when the team still had mathematical chances to reach the quarters. That goal was assisted by Severstal’s Arturs Kulda, at his first point in the tournament. Dinamo Riga’s goalie Kristers Gudlevskis played four games for Latvia, including an important 5-2 win over Austria in the team’s inaugural match. Gints Meija, Emils Gegeris, Kristaps Sotnieks, and Uvis Balinskis scored points for the team, while Kristaps Zile, Martins Dzierkals, and Oskars Batnja finished the tournament scoreless. 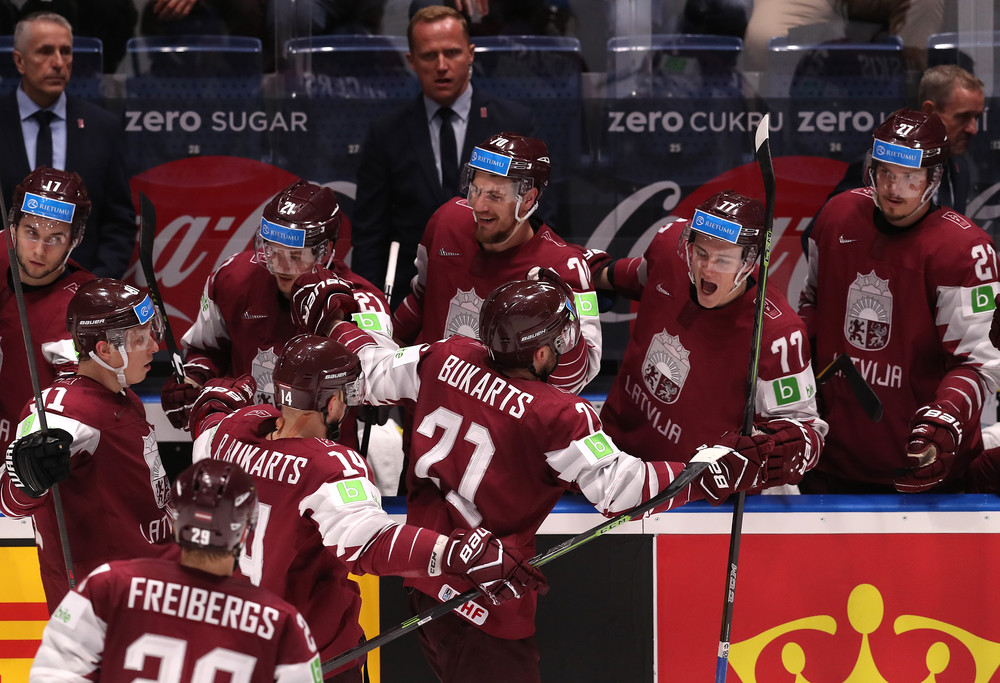 The Finns had a good tournament so far, conceding only 11 goals in seven games and finishing second in the Group A standings behind Canada – whom they defeated in the tournament’s inaugural game. A last-day loss to Germany, however, spoiled a bit the party for the Finns, who will now move on against Team Sweden in the quarterfinals. Admiral’s newly signed goalie Jussi Olkinuora posted a shutout in the 5-0 win over Great Britain in his only game played so far in the tournament. In that same game, Veli-Matti Savinainen – who just joined Jokerit after spending last season with Kunlun Red Star in China – had two helpers of four in his tournament. Sakari Manninen, who was just traded to Ufa, was also excellent, having amassed 6 (1+5) points so far. Another player who just changed teams is Mikko Lehtonen, who moved from the Swedish Hockey League to Jokerit. The defenseman has been excellent so far, scoring precisely the same as Manninen, without getting a single penalty. He is an assistant to the team’s captain Marko Anttila, who however was held scoreless. Defenseman Miika Koivisto had two helpers so far, playing at his second WC.

KHL’s representation in the Team Sweden roster is modest in terms of the number of players, but both Anton Lander and Dennis Rasmussen gave Tre Kronor a significant contribution. Lander, who just moved from Ak Bars Kazan to Lokomotiv Yaroslavl, is the team’s third scorer, with 8 (4+4) points scored so far – including an important goal in the team’s 5-4 win over Latvia. In the same game, the empty-net, game-winning goal was scored by Metallurg’s Dennis Rasmussen. The forward, at his second WC, has scored 3 (2+1) points so far. Torpedo Nizhny Novgorod’s defenseman Philip Holm is yet to play at this year’s WC. The Swedish finished third in the Group B standings, trailing behind the Czech Republic and Russia. 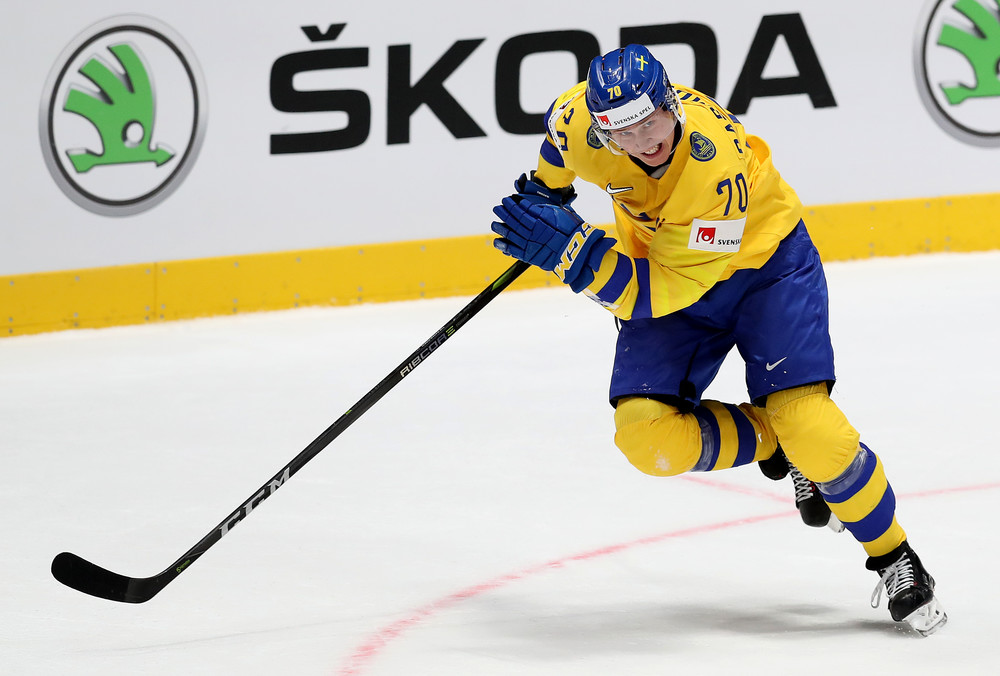 The Czechs have been very good so far in this year’s WC, head coach Milos Riha built an excellent team who can give any opponents a hard run for their money. Avtomobilist’s Jakub Kovar and Spartak’s Robin Hanzl didn’t make the team in the end, but Vityaz’s forward Michal Repik scored 6 (3+3) points in seven games so far, with a plus-6 rating. Among other things, he had multi-point games against Italy and Norway. Amur’s Jan Kolar has been solid on the blue line for the Lions, being plus-8 and adding 4 (1+3) points, but other Khabarovsk’s players – Hynek and Tomas Zohorna – failed to impress and were both held scoreless in the round robin phase. Riha’s team finished the first stage in Group B second position and will face Team Germany in the quarterfinals. 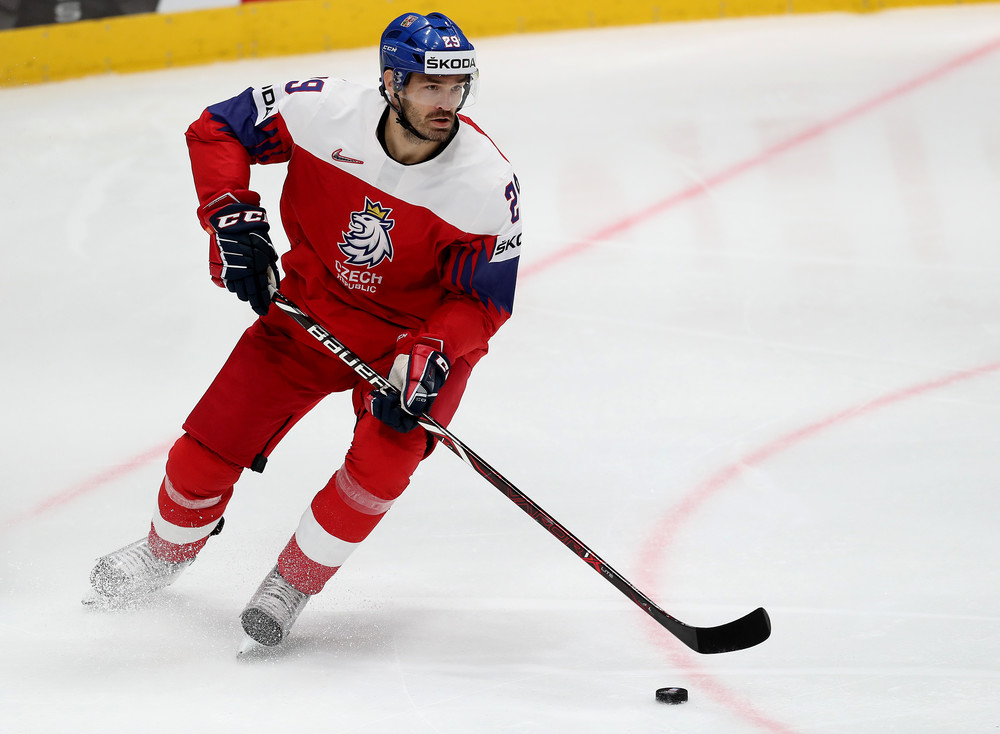 The Russians were the best in the group stage and thus far are the only team yet to lose a single game. In Group B’s seven games, the team led by Ilya Vorobyov gained 21 points, scoring 36 goals and allowing only seven. SKA’s defenseman Dinar Khafizullin is the team’s second top scoring defenseman – trailing only Washington Capitals’ Dmitry Orlov – with 5 (1+4) points. CSKA’s Mikhail Grigorenko had three points for the Russians, including a tally in yesterday’s game against Sweden, where also his teammate Kirill Kaprizov found the back of the net for the first (and for now only) time in the tournament. Also Sergei Andronov, Nikita Nesterov, and Sergei Plotnikov contributed with a single point. In the quarterfinals, the Russians will have an exciting matchup against Team USA.

The IIHF World Championship will be back with the medal round starting on May 23. 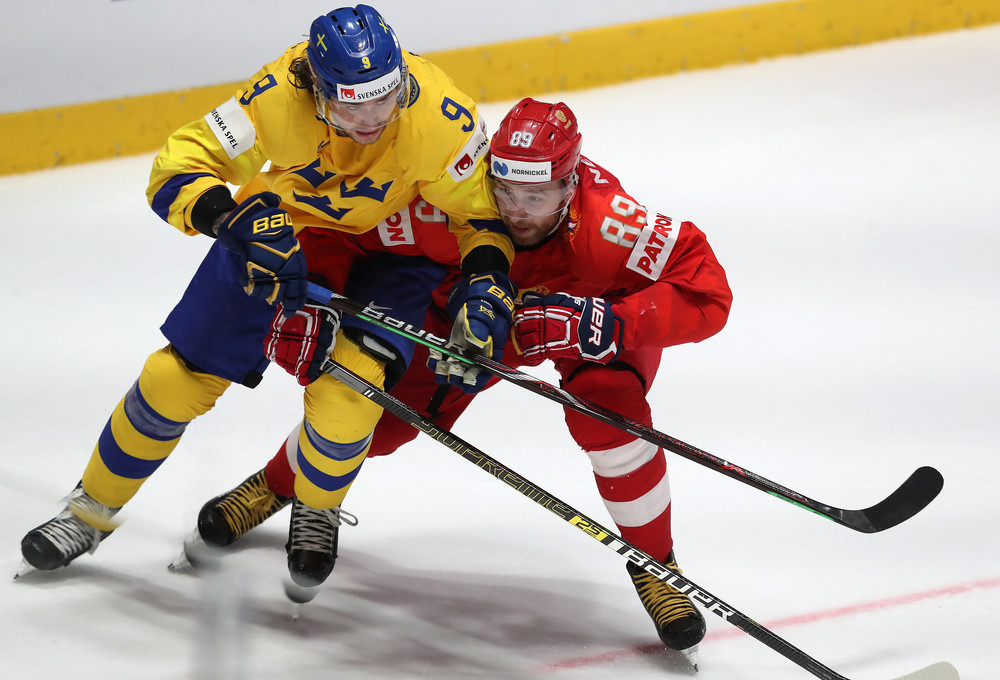