The KHL in Slovakia: two wins for Russia, three goals for Lander

Russia made it two wins from two with Evgeny Dadonov leading the way once again – but not everybody was content with the Red Machine’s performance against Austria. Latvia, meanwhile, went down to a 1-3 loss against Switzerland. Lokomotiv’s new signing Anton Lander enjoyed Sweden’s 8-0 victory over Italy – the 2018 Gagarin Cup winner potted a hat-trick.

Another big win for Russia

Russia eased to a 5-0 victory over Austria to maintain its perfect start to life in Bratislava. Two more goals for Evgeny Dadonov led the way for the Red Army, Ilya Kovalchuk had a goal and an assist and there were further tallies for Nikita Kucherov and Ivan Telegin, the latter scoring in his first game of the championship.

There was also a shut-out for goalie Alexander Georgiev on his World Championship debut. The New York Rangers netminder made 15 saves but insisted that there was plenty to do even if the Austrians struggled to get shots on his net.

“There were plenty of efforts but not many of them were on target,” he said. “I was very much in the game – certainly, I didn’t have time to get bored!”

Georgiev, whose rise began in the MHL with Krasnaya Armiya, CSKA’s junior affiliate, was also encouraged by a defensive display that kept Austria at bay until the very end. In the previous game against Norway, a solid Russian performance was let down by a couple of late goals on Andrei Vasilevsky.

“As a team, we always need to defend to the end and after what happened at the end of [the Norway] game I was happy that everyone helped out in the third period here and we managed to pull out a strong performance,” he added.

CSKA forward Telegin, whose 35th minute goal came on his first shift of the game, told Match TV: “I’ve been waiting a long time to get back on the ice. I was starting to get a bit cold on the bench there! But in a tournament like this you need to be ready to jump in for the team at all teams. Ilya Kovalchuk gave me a great pass and all I had to do was put it in the net.”

Kovalchuk himself, however, admitted that he had some concerns over Russia’s performance. Although the final scoreline was comfortable, it took the Red Machine time to hit top gear and there were some defensive lapses that stronger opponents could punish.

“There are plenty of things I’m not comfortable with,” he said. “We allowed too many odd-man rushes – 2-on-1, 3-on-2 – and we need to be much stronger on defence. Sure, everyone wants to score lots of goals but we can’t forget about our defence.”

Russia’s next game is on Monday against the Czech Republic. Both teams go into the fixture with a 100% record from two games. 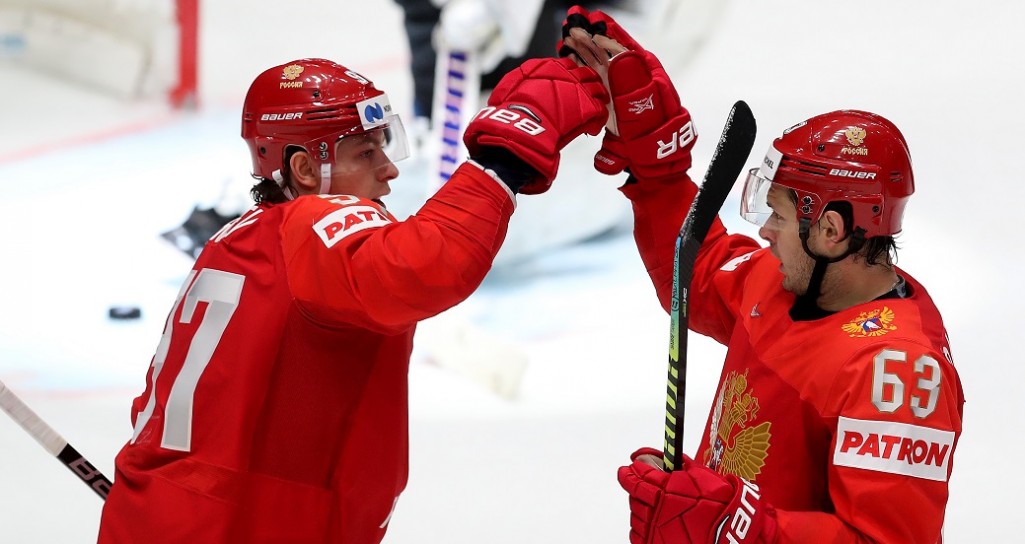 Anton Lander scored a hat-trick to help Sweden to an 8-0 victory over Italy. The 2018 Gagarin Cup winner, who recently swapped Ak Bars for Lokomotiv, opened his account after just 130 seconds as the defending champion made a fast start against the newly-promoted Italians. He then added two more in the third period as Sweden made its class tell late in the game.

However the Italians, who were hammered 9-0 in their opening game against Switzerland, at least managed to keep the game alive until early in the third period. Patric Hornqvist added a second in the 26th minute before two quick goals at the start of the final stanza saw Sweden assume complete control at last. Metallurg forward Dennis Rasmussen had an assist on Sweden’s fourth. The Tre Kronor then ran away with the game. Lander potted a shorthanded goal midway through the third period. William Nylander added a sixth, despite a challenge from the Italian bench and Lander completed his treble before the final word went to Hornqvist.

“We knew we had to win. It was 2-0 after two and we knew we had to keep playing, but play a little more simple, play a little more straight, take that shot when you have it. It paid off in the third,” Lander added. “We needed it. This is still early in the tournament so we’re still working on things. We need our systems to be normal for everyone, so we don’t have to think and we can just go out there and play. If we focus on that, normally good things happen.”

Lander’s team mate Adrian Kempe, who played alongside Kovalchuk with the LA Kings last season, paid tribute to the hat-trick hero. “Anton Lander’s a really good centre man,” Kempe said. “He’s been playing in the KHL and doing really good there. I’m not surprised. He’s a guy you can learn a lot from.”

Latvia loses out against Switzerland

A battling Latvian performance came to no avail as Bob Hartley’s team went down 1-3 to Switzerland. A frenetic clash in Bratislava produced plenty of effort but remained scoreless until deep into the second period. Then the teams exchanged quick-fire goals, with Switzerland’s Philipp Kurashev setting up Gregory Hofmann for the opener before Miks Indrasis tied it up 30 seconds later.

Latvia survived a two minute 3-on-5 situation but, as the tension mounted, Switzerland grabbed a winner through Nico Hischier late in the third period. Simon Moser’s empty net goal wrapped it up and the Alpine nation joins Russia and the Czechs on two wins from two games.

Despite the loss, defenseman Arturs Kulda found some positives from the game. “I don’t think we played badly,” he said. “We had our chances but we couldn’t take them and then they scored on us. I think if we’d done better on our power play the result would have been different.

“If you look at our game, I think we’re going in the right direction. We were very active, we played on the front foot and that’s how we have to play. It’s a step forward in terms of the quality of our game.”

USA, Canada get off the mark

In Kosice, Team USA collected its first victory of the tournament, sweeping aside France with a 7-1 verdict. Alex Debrincat led the scoring with two goals in a three-minute burst early in the game and France never looked likely to recover.

Later in the day, Canada also bounced back from an opening loss with a big win, this time against Great Britain. The Canadians, red-hot favorites ahead of the game, romped to an 8-0 scoreline with Anthony Mantha collecting two goals and three assists.

Germany picked up its second win of the competition with a 2-1 success against Denmark. Leon Draisaitl collected an assist as Matthias Plachta and Frederik Tiffels got the German goals, Mathias Bau pulled one back for the Danes in the third period.