Russia impresses on a day of surprises

Assured start for the Red Machine with victory over Norway.

On a day that would spring a few surprises, Russia made a solid start to its World Championship campaign. Ilya Vorobyov’s team eased to a 5-2 victory over Norway, boosted by a power play that boasted a 75% conversion rate.

Evgeny Dadonov got two of the power play goals, twice finding space in front of the Norwegian net to rifle home Evgeny Malkin feeds from behind the net. Artyom Anisimov showed great awareness to take a Mikhail Grigorenko shot away from Norway’s goalie Henrik Haukeland and there was a third goal on the PP from Nikita Kucherov as Russia jumped to a 4-0 lead midway through the game.

Nikita Gusev, top regular season scorer in the KHL, made it 5-0 early in the final frame before Norway got a couple of late goals – including one from former KHLers Jonas Holos – to put a small blemish on Russia’s day. Vladislav Gavrikov, who flew over the Atlantic to answer Russia’s call following the Blue Jackets’ playoff demise, admitted the team’s defense needed to be sharper.

“We lacked concentration at the end,” the former SKA defenseman said. “We needed to be stronger on defense, make better decisions and take better care of the rebounds.”

Head coach Vorobyov also admitted the finale took the gloss off an impressive performance. “I told the guys we had to be better at the end,” he said in the post-game press conference. “Basically, it happened that in the build-up to the first [Norwegian] goal Orlov’s skate got damaged, so … But we have things to work on.” 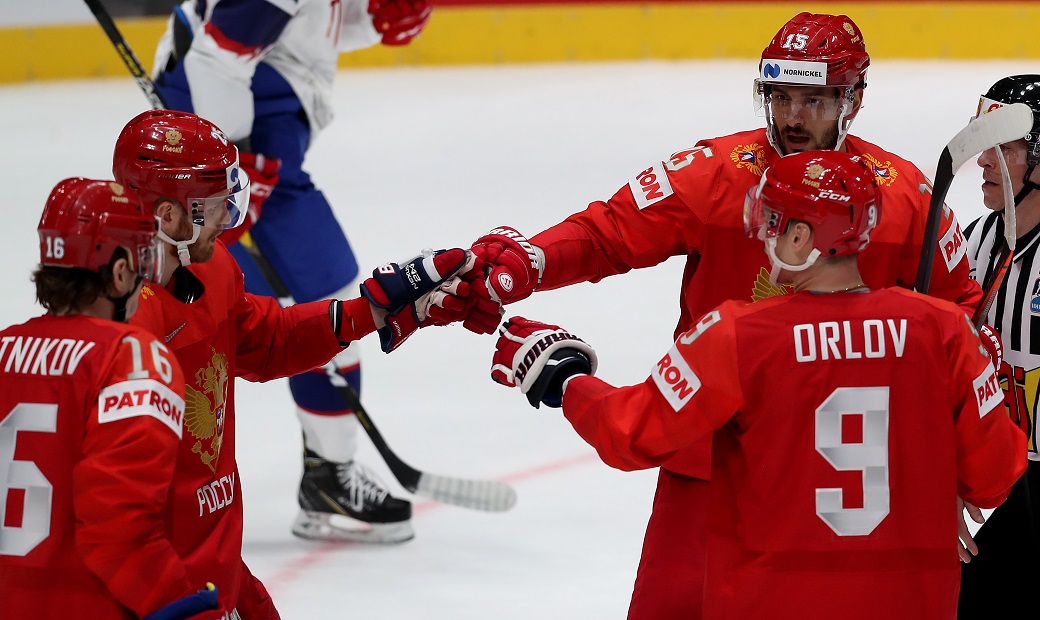 Surprises in Kosice and the Czechs shoot down the Swedes

In Friday’s other three games, the fancied teams might have envied Russia’s ‘problem’ of a sluggish finish to a comfortable win. First, Finland’s ‘unknown roster’ shocked Canada with two goals from a teenager who is fast becoming hockey’s worst-kept secret. Then Slovakia gave home fans something to celebrate with a win over a USA team expected to be in medal contention. And finally, defending champion Sweden fell to the Czech Republic in front of a virtual home crowd for the Czechs in Bratislava.

Finland took the brave decision to leave its established NHL stars at home for this tournament. The only Trans-Atlantic representatives, 19-year-old D-man Henri Jokiharju, 23-year-old blue liner Niko Mikkola and forward Juho Lammiko, also 23, played the bulk of the season in the AHL. The team looked to its KHL contingent for leadership with Marko Anttila captaining and Veli-Matti Savinainen among the alternates. But in Kaapo Kakko, an 18-year-old who already has U18 and U20 gold for the Leijonat, the Finns also have a genuine star of the future. He got two goals in the win over Canada, evoking memories of a teenage Mikael Granlund in 2011, whose memorable ‘lacrosse’ goal helped the Finns to gold in Slovakia.

Jokerit’s Anttila was happy with the way a team full of international rookies adapted to its task in Kosice. “It was a good team effort,” he told IIHF.com. “We had a really good start and battled hard. It’s especially good because we have a lot of first-timers in the World Championship and that’s not always easy because players can be a little nervous. But I think we had a good team game today.”

The day’s second Trans-Atlantic tussle also went Europe’s way with Slovakia surprising the USA. The Slovaks haven’t made a World Championship playoff since 2013 and few were optimistic about their chances this time around. But against a strong American roster led by the likes of Patrick Kane and Jack Eichel, the host nation impressed. Slovan’s Matus Sukel opened the scoring in the fifth minute and Slovakia absorbed the blow of an American equalizer midway through the opening frame to open a 3-1 advantage thanks to Kosice-born defenseman Eric Cernak and NHL veteran Tomas Tatar. Sukel picked up an assist along the way and Michal Kristof potted a fourth in the final stanza as Craig Ramsay’s roster secured a memorable win. However, Slovakia has been here before in recent tournaments: last season it began its Olympic campaign with a 3-2 win over the Russians, only for the nations’ paths to diverge dramatically over the rest of the tournament in PyeongChang.

That left the evening’s big tussle: Sweden vs the Czech Republic in Bratislava. A sizeable visiting contingent turned Slovan’s home arena into a little piece of the Czech lands – loudly – and they had plenty to celebrate when Jakub Vrana fired their team in front inside two minutes. The pulsating atmosphere contributed to a feisty – at times fiery – affair as both teams threw everything into a game that felt like a knock-out encounter rather than an opening day meeting.

The defending champion took time to respond, but a deft ‘through-the-legs’ assist from Elias Petterson saw Patric Hornqvist tie the game early in the second before Oskar Lindblom gave the Tre Kronor the lead in the 24th minute.

The Czechs weren’t done, however. Jan Kovar claimed the assist as Dominik Kubalik tied it up and the third frame brought yet another early goal when Michael Frolik fired through a tangle of bodies crashing into Henrik Lundqvist to restore the lead. With one goal in it, the game was live until the 56th minute when Vrana raced away once again to chase down a pass from Filip Hronek and fire an unstoppable shot past Lundqvist to give the Czechs breathing space. Jan Kovar scored into an empty net to wrap up the second 5-2 scoreline of the day in Slovakia’s capital. That meant Milos Riha had led his country to its biggest ever victory over Sweden in World Championship play.