For the second time this season, KHL opposition went to England to help Great Britain in its preparations for next month’s World Championship. This time, Nottingham was the venue. In the city of Robin Hood, the Brits looked to steal some valuable experience from the hockey riches of our league and use that to boost its own prospects ahead of the coming battles against the world’s best.

Robin Hood might be the most famous historic figure from Nottingham but in the modern era the city is best known for its sport. In football, the inspirational management of Brian Clough made Nottingham Forest champions of Europe. Just across the river Trent, Notts County was a founder member of England’s Football League and has played in that competition since 1888. Both clubs play within a misplaced goal kick of Trent Bridge international cricket ground, while rugby and horse racing are also on offer nearby. Out in the suburbs, tennis and field hockey have their homes … but our focus was Britain’s National Ice Centre. The arena stands on Bolero Square, named in honor of local heroes Jayne Torvill and Christopher Dean, who won Olympic figure skating gold in Sarajevo with a routine to Ravel’s Bolero. It’s also home to the Nottingham Panthers, the first British team to qualify for the knock-out stages of the Champions Hockey League and a regular contender for titles in Britain’s Elite League.

It was Torpedo’s first visit to England’s East Midlands but there was a reception committee awaiting them. The Russian diaspora got to Nottingham before the team – 10 years before in some cases – and arrived with a banner bearing the club crest, the Russian flag and the message ‘Welcome to Nottingham’.

Olga, Natalya and Alla were the designers and they’d brought their English husbands along for a close-up look at Russian hockey.

“We’re all hockey fans but we mostly watch the big international tournaments,” added Olga. “I’ve not seen Torpedo before but I’m really pleased that they came over for these games.”

And how about the prospect of a KHL team in Britain? “Oh, that would be great. We’ve heard about it and we’d love to see it happen.” 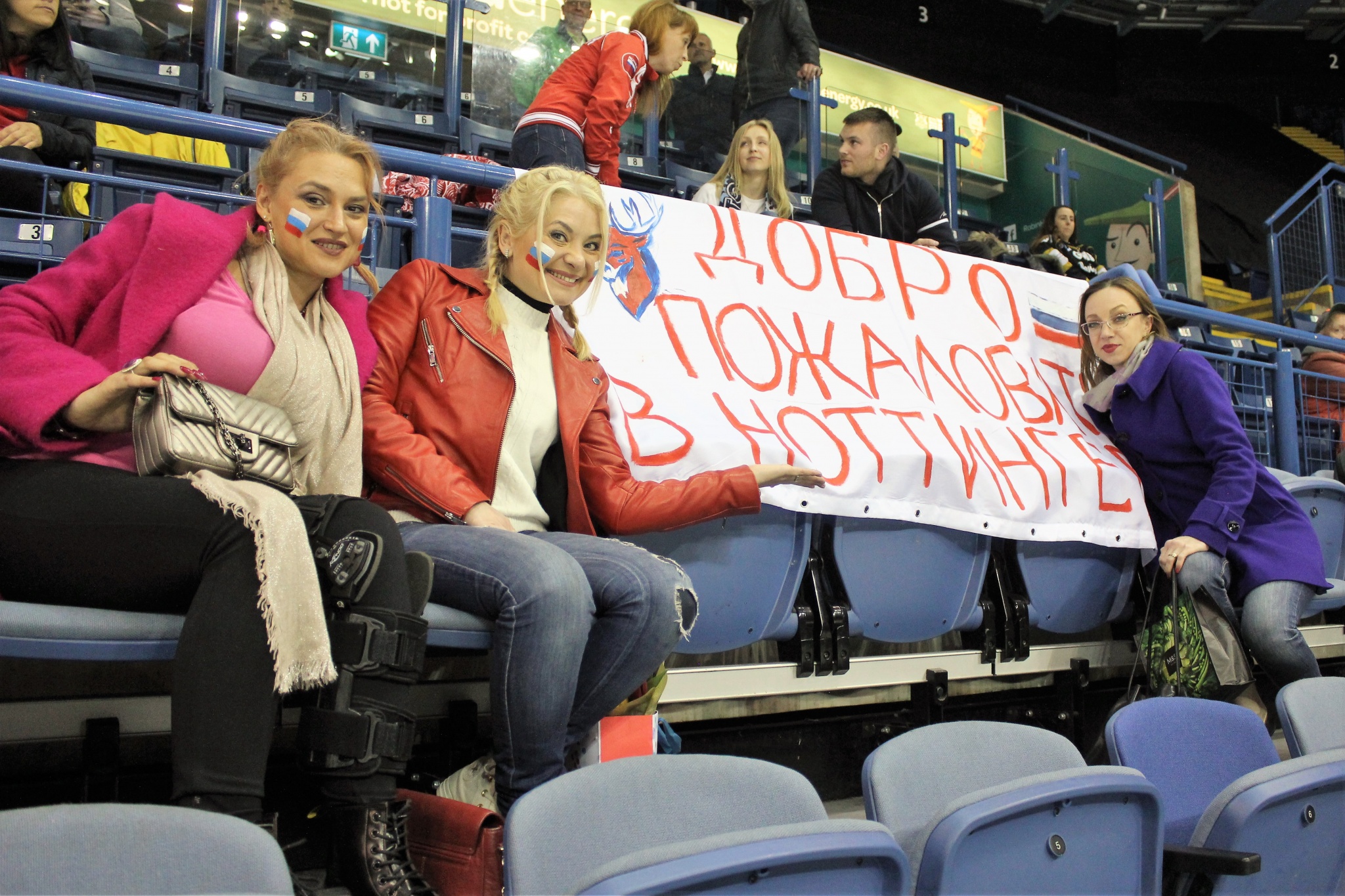 GB got just the start it was looking for with a fourth-minute goal from Robert Farmer. A quick turnover saw Ben O’Connor release his team-mate and Farmer, who plays his club hockey in Nottingham, obliged with a cool finish on Andrei Tikhomirov.

But the rest of the opening frame belonged to Torpedo’s prospects. Mikhail Smolin and Donat Stalnov haven’t had many opportunitiesto impress in the KHL so far in their careers, but they took the chance to impress head coach David Nemirovsky in Nottingham as they conjured two goals in three minutes to turn around that early GB lead. Stalnov got both of them, with Smolin assisting each time. First, the 19-year-old batted down a rebound after Smolin fed Dmitry Rodionychev for a point shot. Then Smolin stole the puck from a British defenseman and set up Stalnov for his second of the night to put the visitor up on 8:35. A Torpedo power play late in the stanza saw Ilya Nazarevich shoot against the base of the post but there was no further scoring. The small knot of Russian fans pumped up the volume with cries of ‘Vperyod, Torpedo!’.

However, Great Britain had shown back in February that it had a taste for playing KHL opposition and the second period began with the home team battling back into the game. Two goals from Robert Dowd put the Brits back in front, both of them close range finishes after shots from the high slot from Ben O’Connor and Ben Lake respectively. Britain had the puck in the net once again through Luke Ferrara late in the frame but the whistle had already gone.

The third frame began with a short-handed goal for Torpedo to tie the game. If the earlier scoring had come from the club’s future, this one was the work of one of its most experienced players. Mikhail Varnakov, a former Russian international, made the intercept and was off to the races, outwitting Ben Bowns to make it 3-3.

The British power play had been underpowered throughout the game, despite several opportunities to show what it could do. But with seven minutes left the host’s special teams got it right. O’Connor was involved once again, feeding Farmer up close. This time the Panthers favorite showed great hands to outfox Tikhomirov and restore Britain’s lead. Another big penalty call – and one that did not impress Torpedo head coach David Nemirovsky – saw Danil Veryayev removed from the game after a big hit on Robert Betteridge and Farmer potted another power play goal to complete his hat-trick.

Torpedo hadn’t played for over a month after its playoff exit and was facing a team putting the finishing touches to its World Championship preparations, but Nemirovsky’s team wasn’t done. A late Dmitry Semin goal kept the game in the balance until the very end but Britain held on for the win.

Following Britain’s win over Dinamo Riga in February, it holds an unassailable 2-0 lead in this unofficial mini-series against KHL opposition. Torpedo will try again in Sheffield on Sunday, looking to secure a consolation result.

It felt good out there, it was a bit of a carnival atmosphere. I enjoyed the game and there were lots of goals.

For me personally it was a good experience. It’s always good for me to play with the senior team and I managed to get a couple of goals tonight, thanks to my colleagues.

What did you think of the British team?

GB is a good team. You can see that they are preparing for the championships and they are in good shape. Maybe that was a bit of a difference in today’s game – we haven’t played for a month and they are at full fitness.

Would you like to see teams from Western Europe joining the KHL?

I’m all for new KHL teams in countries like Great Britain. Today was a good experience and it’s always interesting to play against new and different opponents. I’d like to see it.

Hockey’s played for the fans and I think the fans got an interesting game. It was a pretty even game. When the score was 3-3 I thought there were two calls that were really weak. You don’t call those when it’s a 3-3 game and both teams are battling really hard to win it. It’s not even soft penalties, they weren’t penalties. I’m not happy with those calls but it is what it is. I was very happy that my team battled all the way to the end even though we were shorthanded for the last five and a half minutes.

What does Torpedo get out of these games?

We’ve been off since our last game in the playoffs. We got the guys together a week ago but we’re missing our top two goalies, all our imports, our top three defense. We’re missing a lot but that doesn’t matter, we have a roster and it’s a good exhibition game for the fans. It’s good for our team and gives our fans a couple extra games to watch. It also gives an opportunity for good relations between the KHL and British hockey. It’s a good trip for us, a lot of people had their first time in England. And some of our younger players took their opportunity tonight. We have a few younger guys, some of them haven’t played at all, some have only played a little in the last year. We could give them a chance against a good team. Everybody knows what GB has achieved – they qualified for the top division of the World Championships on merit, they battled hard and they deserve to be where they are.