Last Thursday, Zinetula Bilyaletdinov left his role as the head coach of Ak Bars. KHL.ru reflects on the major milestones in his coaching career, which began in 1988.

On 11 April, a significant event took place not just for Kazan, but for all of Russian hockey. Zinetula Bilyaletdinov resigned as head coach of Ak Bars Kazan. The storied coach, who won three Gagarin Cups and one Superliga championship with Kazan alone, decided to take a break. Sometimes even Bilyaletdinov, a well-known proponent of hard work, needs a rest. We remember all the main milestones in the distinguished coach’s long career, which started all the way back in 1988. Something tells us that Bilyaletdinov is not finished yet, and there will be more awards to come. He just needs to catch his breath.

1988: Starting his coaching career with Dynamo

Having finished his playing career at the age of 33, Bilyaletdinov, a former defenseman, joined the coaching staff of his hometown club Dynamo. The club had also picked up another young coach, Yury Moiseev, but Zinetula Haidarovich stuck with the team. Working as an assistant to Vladimir Yurzinov and Pyotr Vorobyov, he helped guide the white-and-blue to three championship titles. 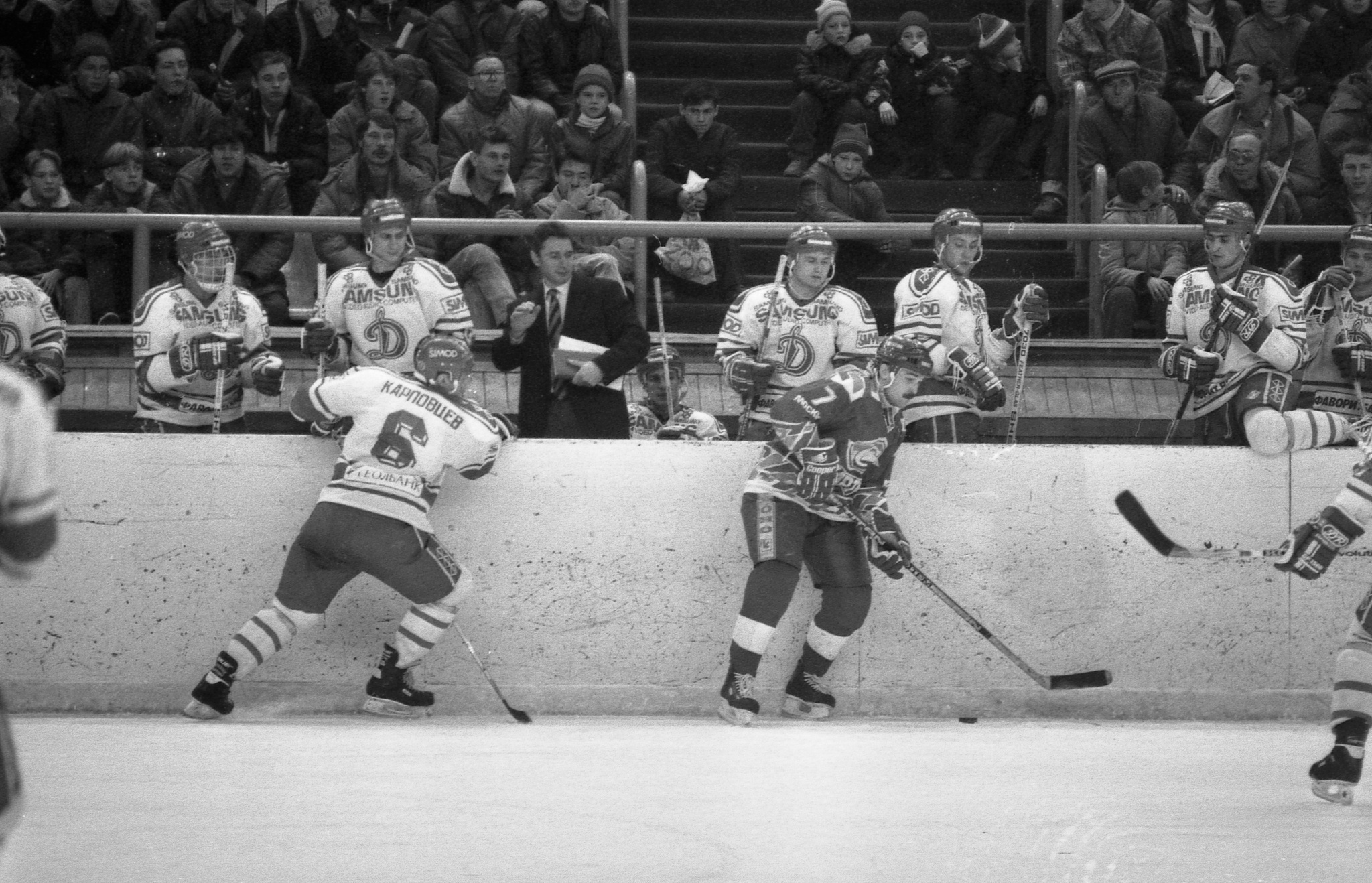 With the departure of Pyotr Vorobyov to Germany in 1993, Bilyaletdinov had the chance to head Dynamo, but he chose a different path. Zinetula Haidarovich was tempted by another offer he had received: to join the NHL’s Winnipeg Jets. He took the job, crossing the Atlantic Ocean to become the NHL’s first ever Russian coach.

As an assistant with the Jets, Bilyaletdinov did not manage to win any championships. What he did gain was invaluable experience, something he has stressed consistently in interviews. Four years in an alien environment forced Bilyaletdinov to see things a little differently. During his tenure in Winnipeg he also had some experience with the AHL and witnessed the team’s relocation to Phoenix, Arizona.

1997: Returning from the NHL and heading Dynamo

At the conclusion of his four-year stint in the NHL, Bilyaletdinov returned to Dynamo Moscow, but in an entirely different role. After their second-place finish in the 1996-97 season, he replaced Vladimir Golubovich as head coach behind the Dynamo bench. Under Bilyaletdinov’s leadership, Dynamo’s lineup featured Alexei Kalyuzhny, Maxim Afinogenov, Alexei Badyukov and other stars, including his future assistant Valery Belov.

The next organization to turns its attention to the North American-trained coach was the Russian Ice Hockey Federation. Bilyaletdinov joined the Russian national team as it headed to the 1998 Winter Olympics. He served as an assistant to head coach Vladimir Yurzinov in Nagano, reuniting with his old Dynamo boss. The Russian squad made it to the gold medal game, where they were unable to overcome the Czechs and their star goaltender, Dominik Hasek.

2000: Winning his first Russian championship as a head coach

Bilyaletdinov’s first season running Dynamo was something of a disappointment: the team finished in fifth place and lost in the Russian Cup final. The next year saw improvement, as Dynamo claimed third, and a year later they succeeded in winning the championship. In a symbolic turn of events, the blue-and-white defeated Ak Bars in both the regular season and the playoff finals, overcoming the future team of their head coach. The 1999-2000 season MVP was Andrei Markov, who would also join Bilyaletdinov 17 years later in Kazan. 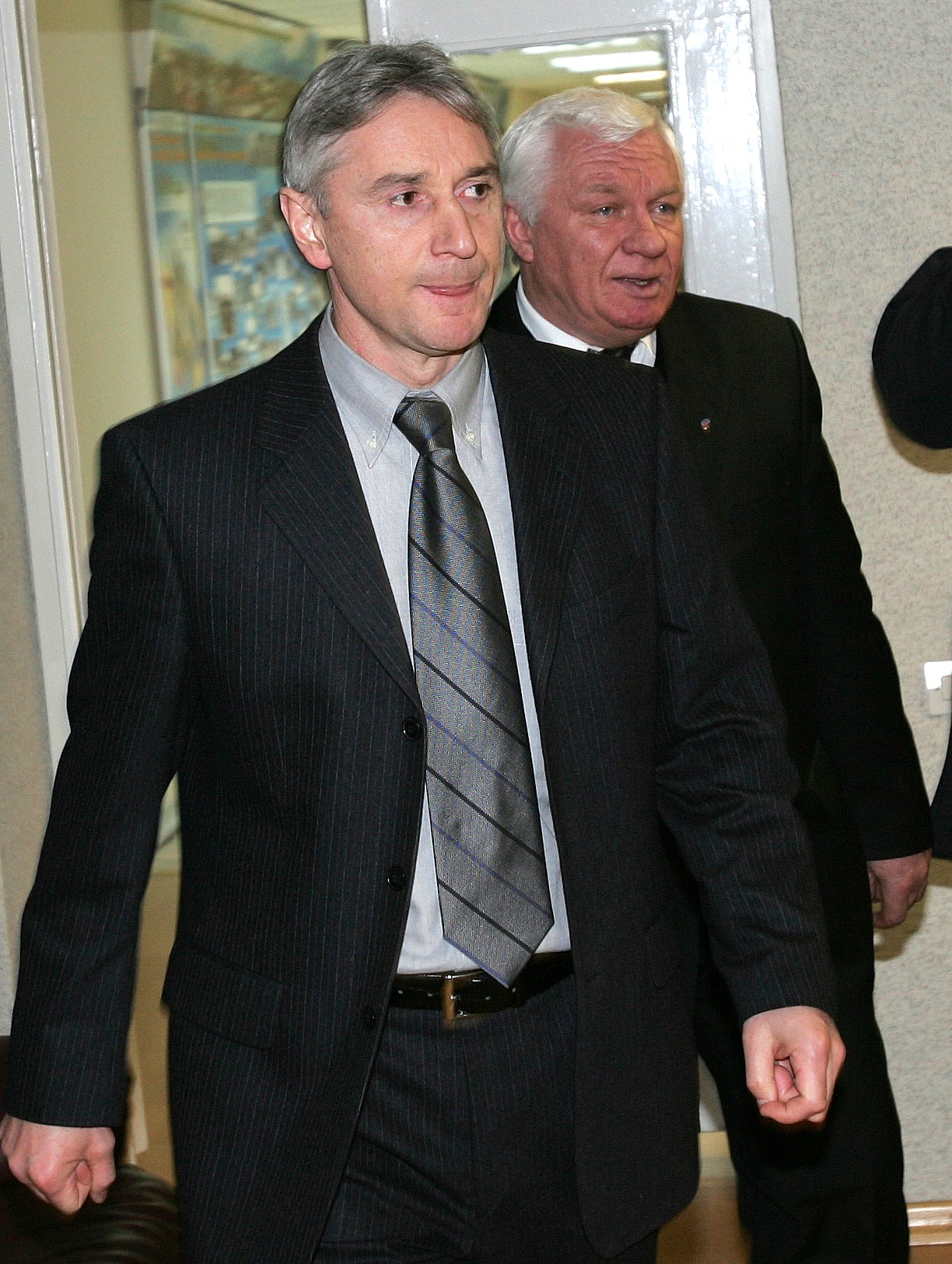 His trip to Canada was not the only foreign foray in Bilyaletdinov’s coaching career. At the turn of century many Russian hockey stars were leaving to Europe, including coaches. In Switzerland alone, Evgeny Popikhin, the elder Yurzinov and the younger Tikhonov managed to find work. Dynamo’s boss joined the trend and left for Lugano. At that time, the Swiss club’s roster and training staff did not feature a single Russian, something Bilyaletdinov admits made the transition difficult. He had trouble adjusting to the different mentality, and following three straight losses in December he was let go.

After his unsuccessful stint in Switzerland, Bilyaletdinov returned to his hometown club. He replaced Vladimir Semyonov as Dynamo’s head coach, but could not manage to repeat his previous successes with the team. Dynamo were knocked out in the quarterfinals that year, and Bilyaletdinov was fired. In a twist of fate, Dynamo lost twice to Avangard and once to Ak Bars: the latter would later become the coach’s second home, while the former would eventually put an end to his tenure in Kazan. 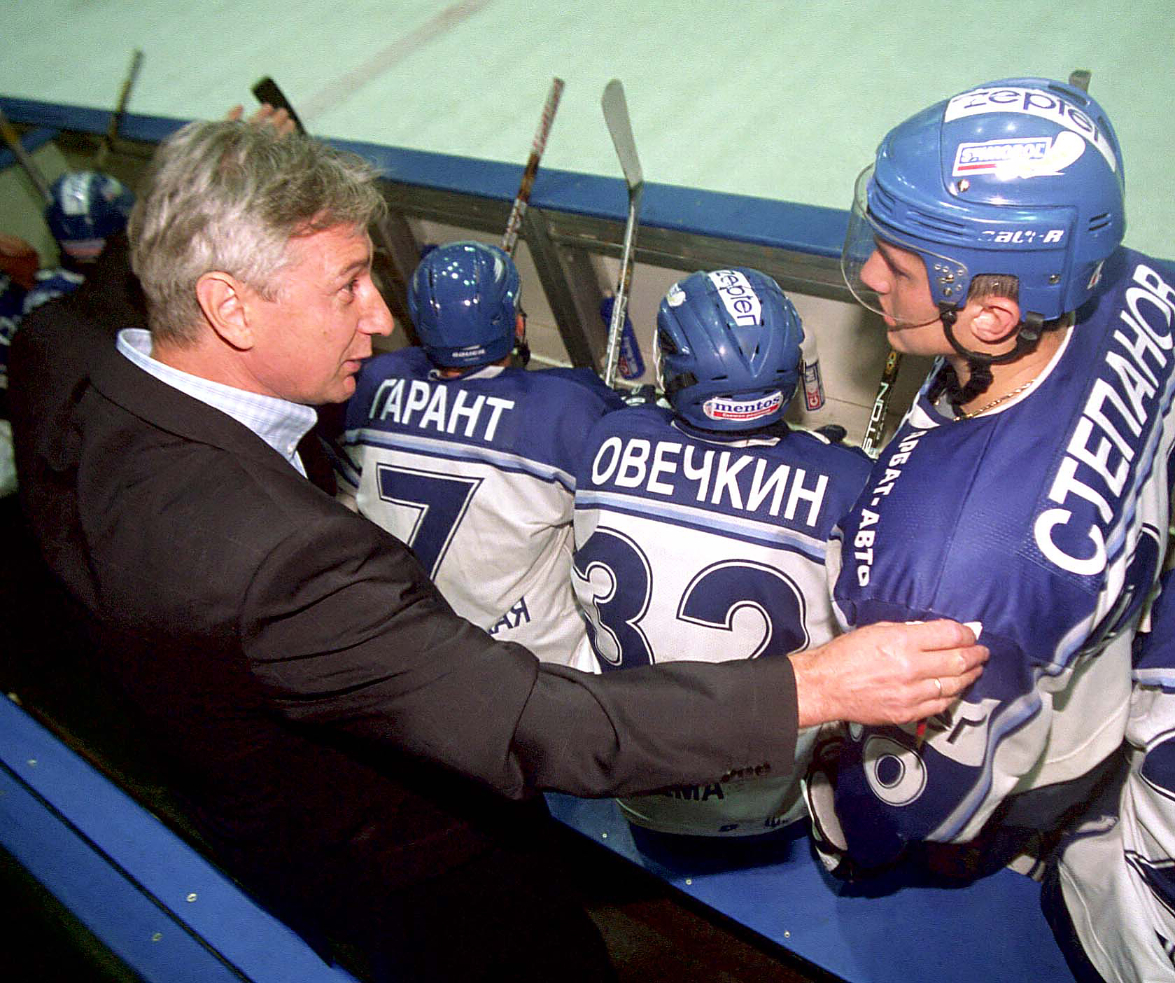 2004: Heading Russia in the World Cup

Bilyaletdinov would be a part of the coaching staff for both the Russian national team at the World Cup and the Winter Olympics, but he did not ascend to the role of head coach for the squad until later. His first stint as the Russian team’s head coach came at the 2004 World Cup. The team struggled to succeed, however, falling in the quarterfinals – the same round in which so many of Bilyaletdinov’s Dynamo squads had stumbled.

Despite his long resume and NHL experience, Bilyaletdinov was not an obvious candidate to become head coach of Ak Bars for the 2004-05 season. His recent lack of success had created doubts in his abilities – fears that were eventually confirmed. The Kazan club, celebrating the 1000th anniversary of the city’s founding, decided to go all out, signing several big-name NHL stars as the North American league was then shuttered due to a lockout. Bilyaletdinov’s squad included Nikolai Khabibulin, Alexei Zhitnik, Vincent Lecavalier, Brad Richards, Ilya Kovalchuk, Alexei Kovalev, and Dany Heatley. Despite this overwhelming amount of talent, the team never found its footing and was knocked out in the quarterfinals, again, by Alexei Yashin’s Lokomotiv squad. 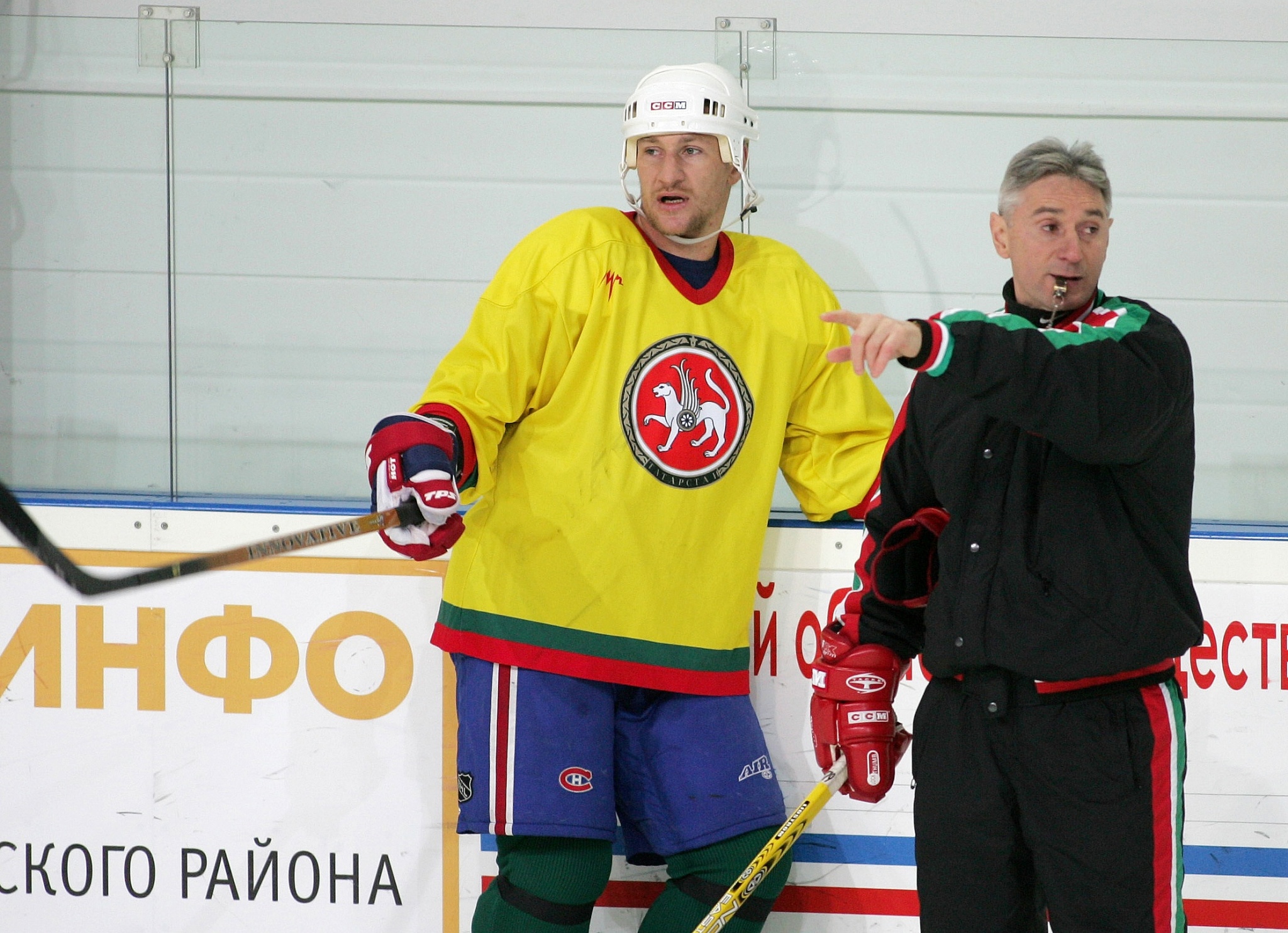 Kazan nevertheless showed patience with their coach, giving him another chance. Bilyaletdinov, himself a Tatar, brought Tatarstan’s main club its second-ever title in the Russian championship. With the departure of the foreign stars, who despite their talent had never succeeded in finding chemistry, Bilyaletdinov brought together Danis Zaripov, Sergei Zinovyev, and Aleksey Morozov – a core that would not only lead Ak Bars to the title over Avangard that year, but would serve Kazan for many years to come. Fatefully, Bilyaletdinov brought the championship back to Kazan a year after the passing of Yury Moiseev: his former mentor, as well as the man who led Ak Bars to its first-ever title in 1998.

The formation of the KHL did not shake the position of Ak Bars, but rather strengthened its. Ak Bars became the inaugural champions of the new league, defeating Bilyaletdinov’s old club Dynamo in the semis before topping Lokomotiv and avenging their 2005 defeat in the finals. Morozov scored the winning goal in the seventh game, establishing Bilyaletdinov as a trendsetter. It was after this win that a more physical brand of hockey started to be appreciated in Russia, leading to a new wave of Finnish players joining the league.

The next year’s quest to repeat as champions proved much more difficult for Ak Bars. They had a tough regular season, finishing far from the head of the pack. But once the playoffs began, it was a different story. Bilyaletdinov’s coaching pedigree showed itself especially in the finals, against HC MVD. The defending champions had to do without star players Danis Zaripov and Alexei Morozov, but still managed to overcome their opponents. Kazan’s victory despite adversity for their second-straight title had some saying that the KHL’s championship trophy should be renamed the Tatar Cup (a play on its Russian-language name). 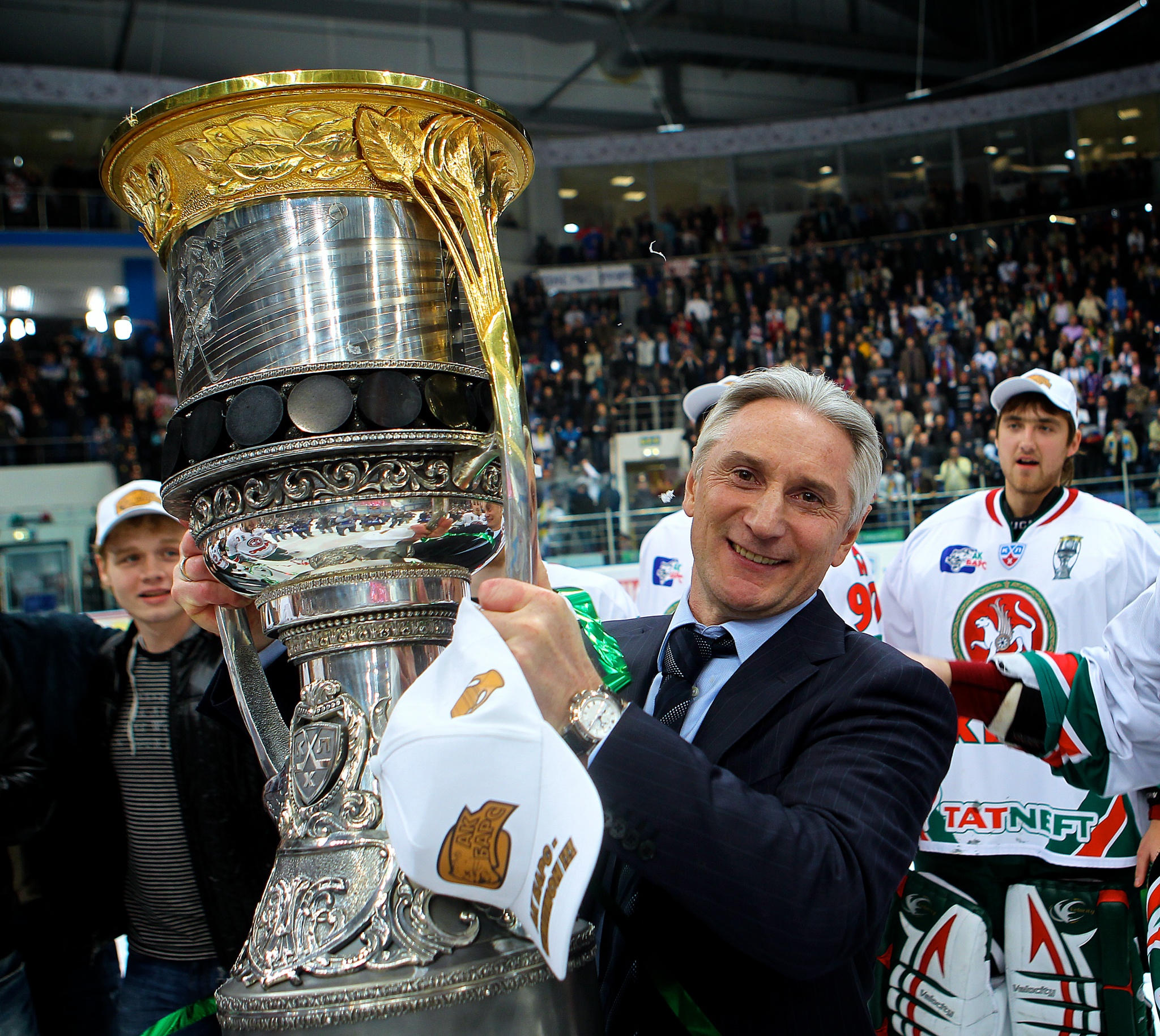 Following the Russian national team’s parting of ways with its coaching tandem of Vyacheslav Bykov and Igor Zakharkin, few had any doubts about who should replace them. Bilyaletdinov was the most successful coach in the country, and his lack of success to date with the national team seemed to most as valuable experience, rather than a black mark. In order to join the national squad, Bilyaletdinov had to leave his beloved Kazan. He left his longtime assistant Valery Belov to serve as Ak Bars’ new head coach.

From the first moment, the Bilyaletdinov-led national team was a sensation. The Russian squad did not drop a single game, outscoring their opponents 27-8 in the group stage en route to a pair of six-goal performances in the final and semifinal games. The performance shattered the stereotype that Bilyaletdinov-coached teams tended to be boring to watch, with the trio of Alexander Popov, Evgeny Malkin, and Alexander Perezhogin dominating the competition. After a three-year absence, Bilyaletdinov had succeeded in returning the World Championship title to Russia. 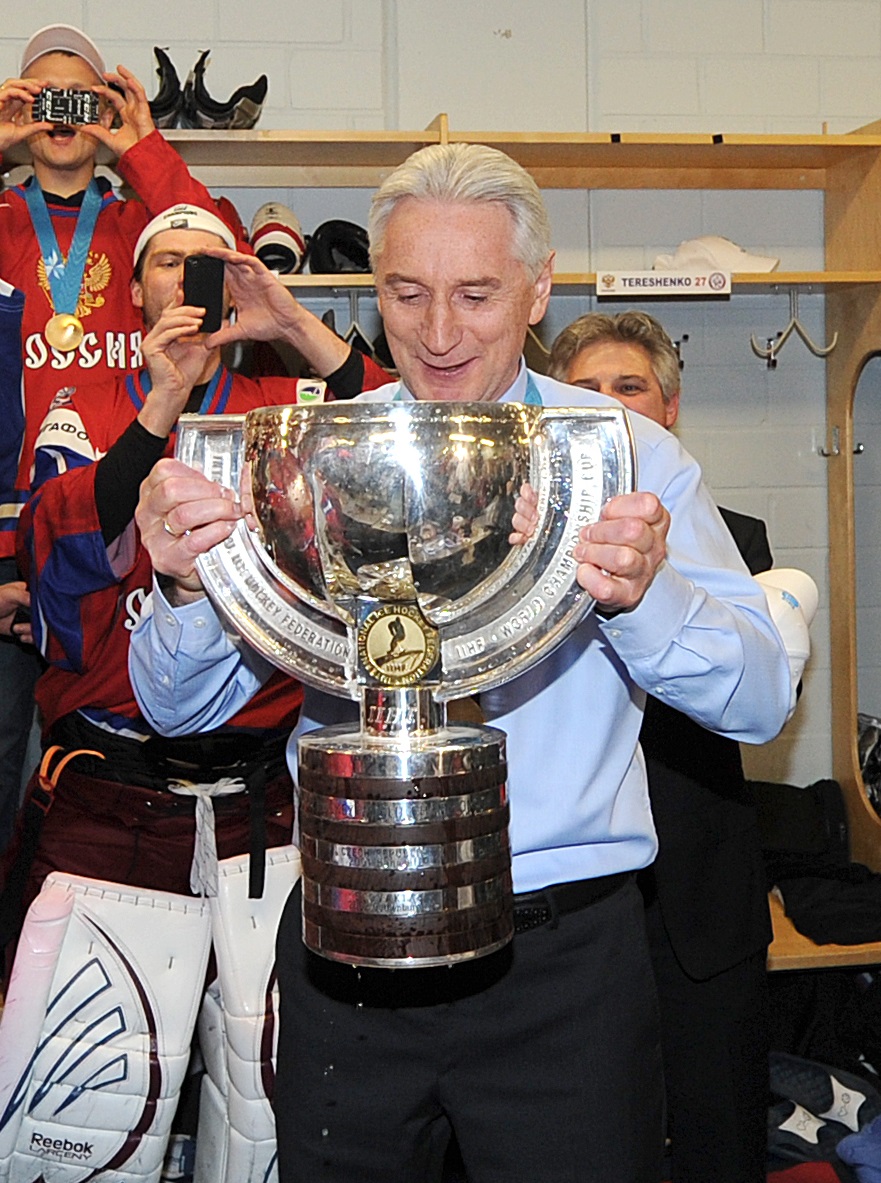 2014: Leaving the Russian national team after disaster in Sochi

This success was not to be repeated at the 2014 Sochi Winter Olympics, however. The first sign of things going wrong came at the 2013 World Championship in Helsinki, where the Russian team lost to the Americans in the quarterfinals, much to Bilyaletdinov’s dismay. The Russian squad allowed eight goals in the game and finished without a medal. This story was repeated at the Sochi Olympics, where the Ak Bars head coach experienced significant difficulties. The Russians were knocked out by the Finns – yet again, in the quarterfinals. The iconic moment of Finnish forward Mikhail Granlund beating Russian defender Vyacheslav Voinov in a footrace to a loose puck before setting up the game-winning goal was seared in the minds of Russian fans, players, and coaches everywhere – including Bilyaletdinov.

Having lost before the home crowd at the Sochi Olympics, the fate of the team’s coach was sealed. Bilyaletdinov did not have to look far for a job, however: Kazan had been waiting for him. At first he took up the mantle of Ak Bars’ general manager, but after the team’s playoff exit returned to his usual role of coach. While the team did not win the championship immediately, they still made it to the finals, falling in five games to SKA Saint Petersburg.

Eight long years passed between the second and third KHL titles won by Bilyaletdinov’s Ak Bars. During the interim, seminal forward Alexei Morozov had left Kazan. Danis Zaripov returned from Magnitogorsk, but he was no longer the same dominating force as before. Most importantly, the two Army clubs – CSKA Moscow and SKA – had long since established themselves as the two top teams in the league. All this contributed to the atmosphere when Ak Bars, decidedly the underdog, met CSKA in the 2018 finals. The Kazan club proved victorious against the odds, capturing their third Gagarin Cup in remarkable fashion. Bilyaletdinov’s long experience proved a key factor in outwitting the heavyweight Moscow club in a hard-fought series. 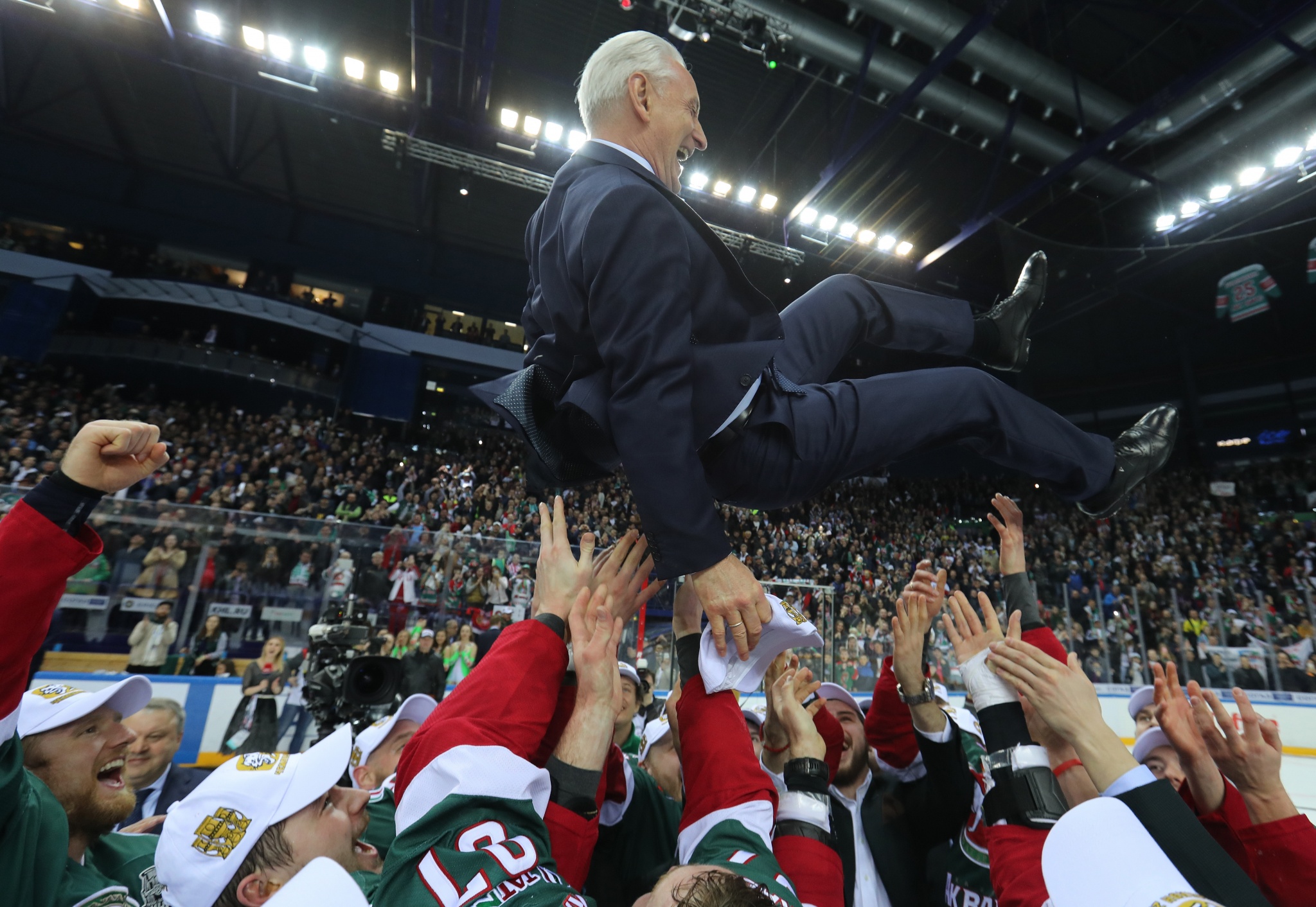 Another milestone in Bilyaletdinov’s career came in spring 2019. Following their exit to Avangard in the first round of the playoffs, the longtime coach of Ak Bars resigned. It was not the first time for Bilyaletdinov, however, and as his repeated tenure with Dynamo earlier in his career shows, the current resignation is unlikely to be his last. It’s still early to close the book on Zinetula’s career.