The West and East finals were both great series, with Avangard and CSKA deservingly moving on to the final chapter of the 2019 Gagarin Cup playoffs. In the finals, the two teams that showed the best hockey throughout the season will clash for the joy of the spectators. Both sides never won the Gagarin Cup title, thus we’ll have a new champion this year – the sixth in the League’s history.

CSKA Moscow needed seven games to get rid of a tenacious SKA St. Petersburg – one more than last year – and get to its third Gagarin Cup finals, the second in a row. In 2016, the Red Army, led by its frontman Alexander Radulov, surrendered to Metallurg Magnitogorsk after seven games. In 2018, Ak Bars needed only five games to get the best of CSKA.

This year, however, things may be different. The team has more experience, and the same can be said about some key players who are still young, like Kirill Kaprizov or Konstantin Okulov. The #97 had great playoffs, with 12 (3+9) points in 15 games – up from 10 (2+8) points amassed last year. However, Igor Nikitin shuffled a bit the lines in the latest games against SKA, and Kaprizov was moved a bit down in the lineup. There is little doubt that Kaprizov will get back in the top lines – after all he showed outstanding chemistry with Mikhail Grigorenko and gave a significant contribution in the series against Vityaz and Dynamo Moscow.

Grigorenko is the team’s top scorer with 15 (8+7) points in 16 games. Okulov and Kaprizov follow with 12. On defense, Nikita Nesterov and Mat Robinson are the second and third top scorer among defensemen in the entire League, trailing only to Avangard’s Cody Franson. Netminder Ilya Sorokin leads the KHL in saves percentage and shutouts (tied with Hawks’ goalie Igor Bobkov) and will be one of the critical weapons for the Red Army.

In Balashikha, Avangard had a great playoffs race, with successful series played against Ak Bars, Barys, and Salavat Yulaev. The series against Ufa was nothing short of fantastic, with six hard-fought games and a win that cemented Hartley’s reputation as one of the best coaches to have appeared in the League.

Moreover, many top Avangard players suffered from injuries during the playoffs (like defenseman Evgeny Medvedev and forwards Denis Zernov and Ilya Mikheyev), and this is just another testament of how hard the team fought and how successfully the staff worked. The team successfully uses the high-pressure style preached by his coach, and it worked out to reach the Gagarin Cup finals for the second time in the KHL history. In 2012, the Hawks lost 4-3 to Dynamo Moscow, en route to its first KHL title.

Many Avangard players are having strong playoffs. Forward Taylor Beck leads the League in assists with 14 helpers in 12 games, while Cody Franson led all the defensemen in scoring, with 16 (3+13) points in 15 games. As said, goalie Igor Bobkov shares the lead in shutouts with CSKA netminder Sorokin, with 3. Beck is also tied in the third position for overall scoring, with 18 (4+14) points. Veteran Alexei Emelin is among the most-used players in the league, logging an average of almost 26 minutes a night. As expected, he is also among the leaders in hits, with 34. Unsung hero, defenseman Ville Pokka leads the KHL in blocked shots with 59.

The team met twice during the regular season, and CSKA Moscow got both times the last laugh. On October 7, a double by Mikhail Grigorenko and a two-point performance by Kirill Kaprizov and Linden Vey allowed the Red Army to win 4-2 in Balashikha. Two months later, the hero of the night was Sergei Tolchinsky, who posted a double to help his team gaining the victory with two goals.

The clash between Avangard and CSKA will start on Saturday, April 13, at the CSKA Arena in Moscow. 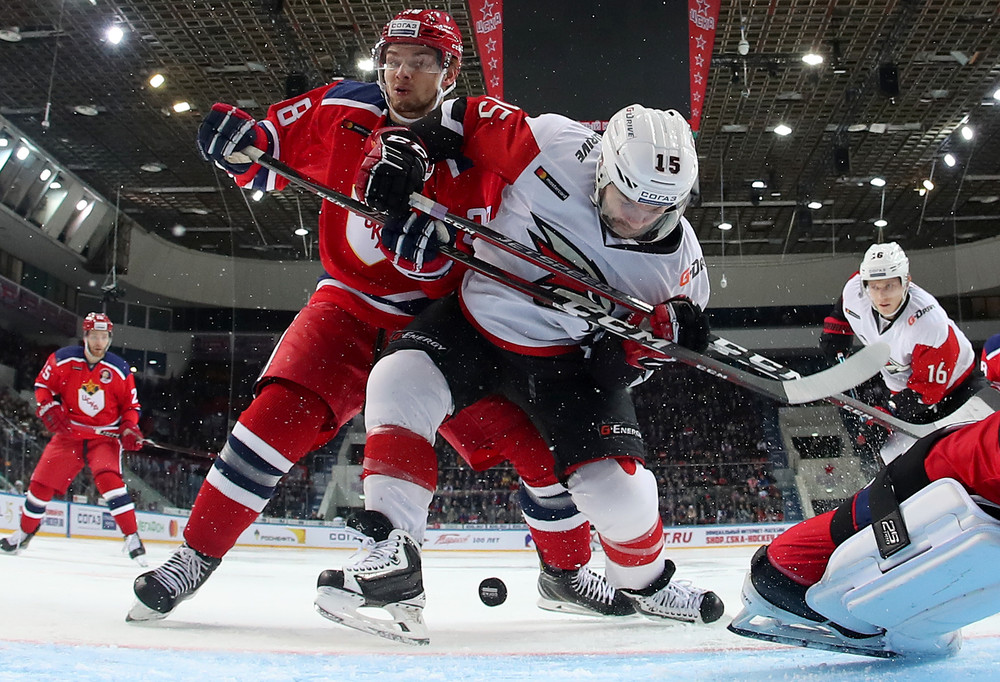