An overtime goal from Joonas Kemppainen – his 10th of the current playoffs – saw Salavat Yulaev extend its season and deny Avangard the chance to book its place in the Gagarin Cup final. Despite the absence of key defensemen Grigory Panin (injury) and Alexei Semenov (suspension), Nikolai Tsulygin’s team left Balashikha with the win it needed to keep the Eastern Conference Final alive and send the action back to Ufa on Monday.

But it took a long time to separate the teams after another big battle. Kemppainen’s winner arrived in the 89th minute when he got to the near post to stuff home a Teemu Hartikainen feed and snap a 2-2 tie. Bob Hartley on the Avangard bench immediately called for a review, hoping for evidence that the Finn had encroached onto the paintwork, but his appeal was in vain. Goals from Kemppainen, Linus Omark and Alexander Burmistrov, plus the little matter of 58 saves from Juha Metsola, had given Salavat Yulaev another chance.

The visitor made a bright start to the game, with Burmistrov opening the scoring in the third minute. Taking a Zakhar Arzamastsev pass into the Avangard zone, Burmistrov surprised Igor Bobkov with a wrister from the left circle that whizzed into the top corner. It was the Ufa forward’s first goal of the playoffs and could hardly have come at a more significant moment. Salavat Yulaev had served notice: it wasn’t leaving the contest without a battle.

However, Avangard has always posed a threat in this series with Sergei Shumakov often at the heart of its best moments. The forward popped up again with 12 minutes played to tie the game after Kirill Semyonov was allowed to travel unchecked from center ice all the way behind Metsola’s net. The defenseman’s feed to the slot was meat and drink for Shumakov.

For a time it looked like Avangard might be taking control of the game, even if its possession did not bring any serious alarms for Metsola. But the visitor produced two raids late in the opening frame that extended Bobkov and reminded everyone that this game was destined to be tight to the very last. Vladimir Tkachyov had the first opportunity, Kemppainen the second as the home goalie put his early lapse behind him with two fine saves.

After the previous game ended with tempers flaring, both teams were working hard to stay out of the box here and it wasn’t until the 36th minute that the first power play arrived. When it did, though, it led to Avangard taking the lead. Ilya Mikheyev, whose two goals in the previous game turned the outcome in his team’s favor, slung the puck towards the net where Max Talbot battled to stuff it past Metsola’s pads. The officials consulted the video and deemed that the disk had completely crossed the line – 2-1 to Avangard in the 37th minute.

The next trip to the video screens was less successful for Avangard, though. Another power play saw the puck in Metsola’s net once again thanks to Denis Zernov. However, this time the visiting bench challenged for goalie interference by David Desharnais and the complaint was upheld. Within moments, Ufa had its first PP of the game and tied the scores once again. This one was all about Linus Omark, with the Swede exchanging passes with Philip Larsen before advancing down the right channel and firing across the face of Bobkov to the far corner. Ufa had to kill one more penalty before the extras, but held on to take us into sudden death.

Overtime, as always, was nervy. It wasn’t until late in the first session that either team really conjured a clear chance. Hartikainen came close in the 75th minute, Metsola denied Artyom Manukyan soon afterwards, but both teams were content to play watchful hockey. The second session continued in similar vein, with both teams happy to hold the puck and probe for an opening but reluctant to go for the high-risk Hollywood play that might prove decisive. But Kemppainen eventually came up with the necessary and ensured that Avangard’s progress with be delayed, if not cancelled altogether.

Congrats to Ufa, it was a great battle. Anytime a playoff game goes to double overtime you can’t fault the effort from both sides. The effort was outstanding tonight. We had our chances, they got their chances and they got the last one. That’s the story of the game.

Is there a psychological impact of losing when you could have wrapped up the series?

Playoffs are like a rollercoaster ride. There’s up and downs and the next day you have to get up and forget what’s behind you. It’s always what’s ahead of you. It was a great game, it could have gone our side. There were times when I felt for a while we had the game under control both teams worked unbelievably hard and that’s the way it goes.

Would you agree that stopping Ufa’s first line is the key to winning this series?

I feel that we’re doing a pretty decent job but they’re a very good line. They are the reason why they beat Magnitogorsk and Avtomobilist. They’re big, they’re strong, they play well and they’re very creative. I feel like we match very well but tonight they got the winning goal.

It was a really good, tough game, a real playoff battle. It’s great that we could win it and bring the series back home in front of our own fans once again. Everybody who went out on the ice gave it everything, from the first shift to the last. And the guys in reserve bring great support as well – we’re a united team. That’s why we won today.

Of course we hope we can recover in time for Monday’s game. If we’d lost, we wouldn’t need to worry about it but after a win it’s always easier to get back to work. That’s especially true of our first line, because they played a bit more than the rest and maybe pulled the team forwards. But everybody who stepped onto the ice gave everything he had.

I think every team has problems when it has to kill penalties. It drains a lot of energy from your game. Even if you don’t allow a goal, the initiative still moves to the opponent; they get a feel of the puck and can dictate the rhythm of the game. It’s tough, but we can’t make excuses. We have to deal with it and get out of that hole.

Avangard’s power play is strong. They go out and score. That’s more about their strengths than our weaknesses. They go out and take their chances, if they get one look, they score. That means we have to concentrate for the full two minutes and not allow them a chance. 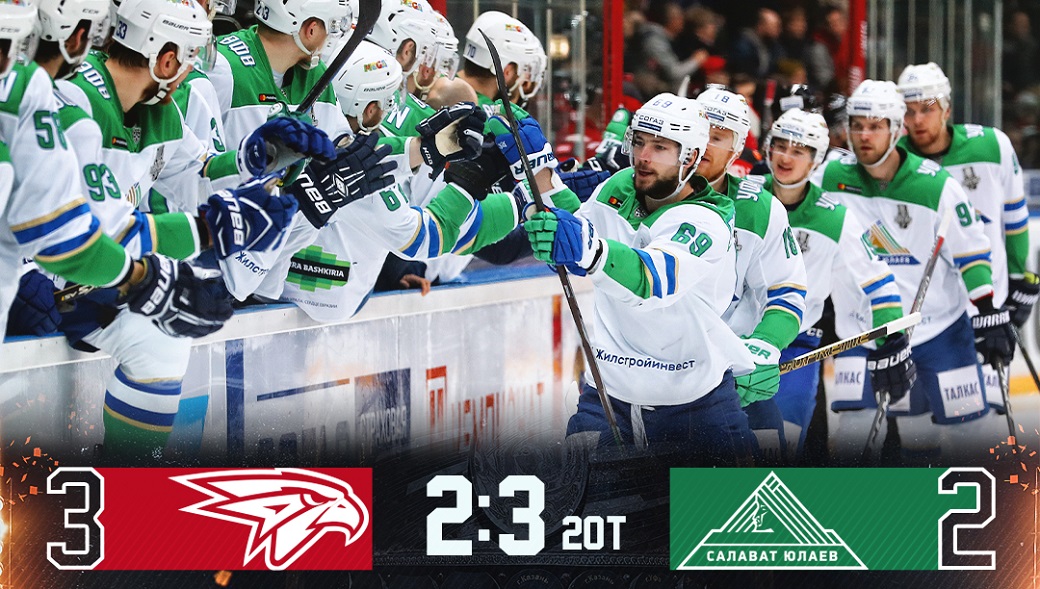