Andrei Skabelka: “Our season wasn’t a miracle, but the fruit of our work”

In this KHL.ru exclusive interview, the Barys’ bench boss shares his view on his team’s successful regular season, remembers the breath-taking playoffs series against Torpedo and the unlucky clash with Avangard, discusses the role of the international players in his squad, talks about the upcoming Div-I World Championship, and much more.

If comparing this season with the 2017-18 campaign, the Kazakhstani club had a significant step forward. Barys had a successful regular season, winning the Chernyshev Division and gaining the second seed in the Eastern Conference. The series against Torpedo was the most thrilling of the entire first round as the team led by Andrei Skabelka needed seven games to go through. However, Avangard stopped Barys’ run in the second round as they won the series with a 4-1 score. 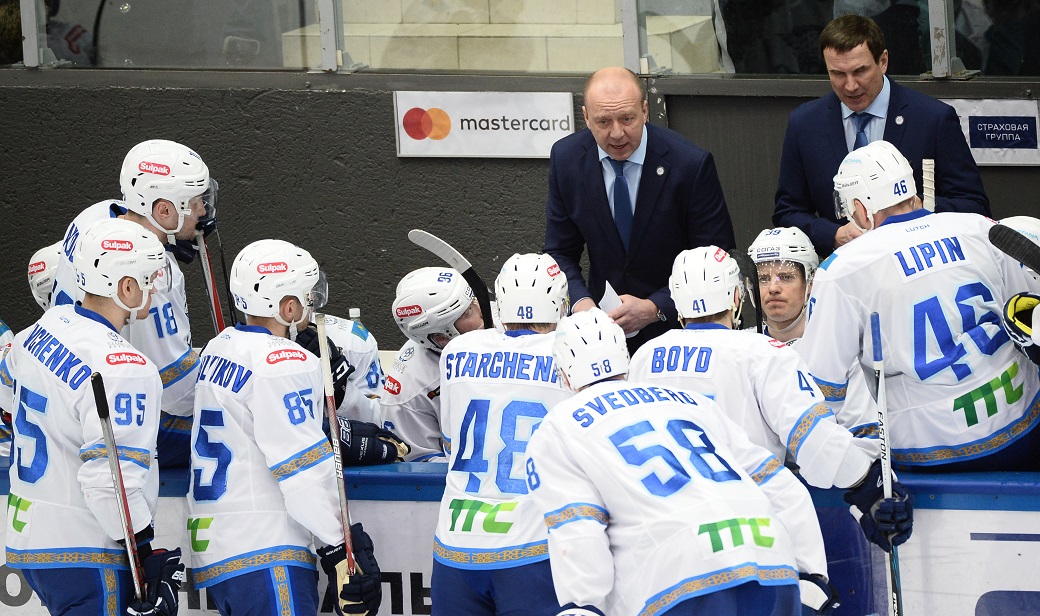 “A for the regular season, C+ for the playoffs”

Barys’ season is over for two weeks now, but Skabelka and his staff are still working with the team and are also busy with Team Kazakhstan in sight of the upcoming Div-I World Championship, schedule in home soil. “After the series against Avangard, we allowed some vacations to our players on a one-way deal, while the players on a two-way contract were assigned to Nomad. Our farm team is now disputing the title of Kazakh champions,” Skabelka explains. “There is a lot of work in front of us before and during the upcoming World Championship. Some time off was necessary.”

Skabelka, however, didn’t manage to stop thinking about the season fully. “I couldn’t avoid thinking about hockey,” the coach admits. “How can you work within hockey and do not think about it? You know, phone calls, talks, and so on. Of course, I kept on thinking and analyzing things.”

Naturally, each coach is asked to judge the season, and Skabelka had an objective look at it before replying. “I’m going to assign us an A for the regular season, and a C+ for the playoffs.”

All the players with a Kazakhstani passport are going to stay. Regarding imports, Dietz has still one year on his deal, and we’re dealing with the other international players. I am not going to speak out names, but we are planning to part ways with some of them. We also want to strengthen our goaltending lineup.

No matter if the playoffs are now over for Barys; Skabelka and most of his players are focused on the upcoming World Championships, showing how much working for Barys and Team Kazakhstan are two very close tasks and that it’s early to draw conclusions. “The season for us isn’t over yet,” Skabelka says. “Barys and Team Kazakhstan are indissoluble. We can conclude only after the World Championship.”

Apparently, the coach was happy with the way the team was built in sight of the 2018-19 campaign. “You know, when I arrived in Astana, due to my habits, I was thinking about what Russian players we could sign. But here it’s different, thus I stopped fast thinking about them. But here the specifics are different, so we had to abandon the idea as everyone is considered with a view to the Kazakhstani national team. Yes, there were some international players that we wanted to acquire, but we could not. Nothing of terrible; it happens.”

The bench boss is pleased with the way the team assembled its lineup. However, he doesn’t desire to highlight single players. “I’m not going to say that a player was better than another,” he says. “We did a great job with the summer transfers after thoughtful analysis. During the season, we didn’t release any import, and this talks aloud about how successful the team was assembled. We had a chance to trade some of our players, but we didn’t feel the need.” 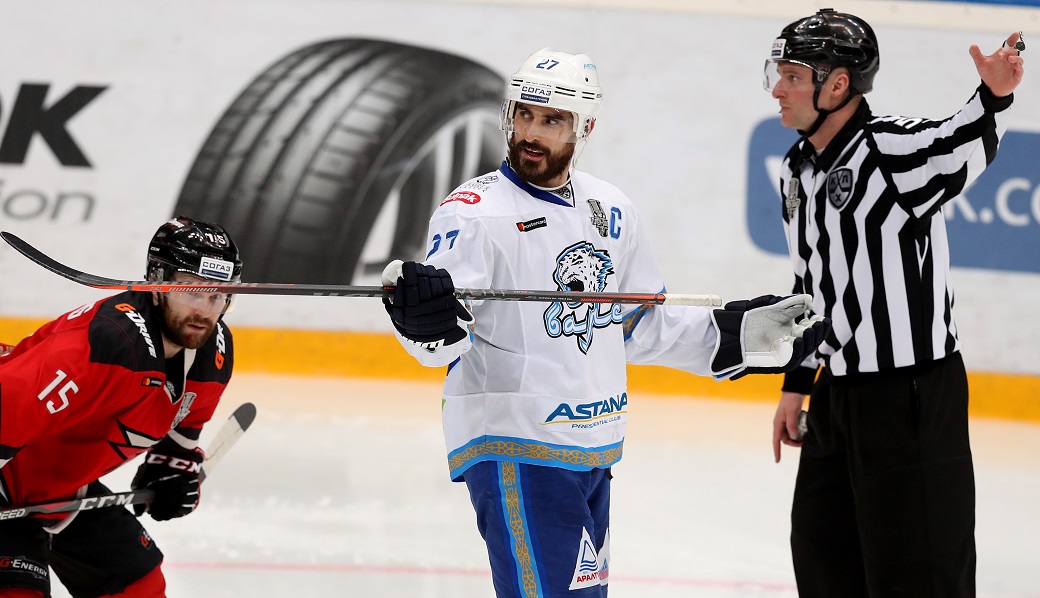 “Bochenski was irreplaceable as captain and assistant coach”

One of the top acquisitions of the summer was the return of Brandon Bochenski. The veteran forward was one of Barys’ top players, producing 34 (15+19) points in the regular season and 13 (4+9) in the playoffs. “You can say that Bochenski is the symbol of latest years’ Barys,” Skabelka explains. “He is such a huge presence in the locker room. Brandon had a great preseason, he was the first rank for many tests, without missing a single practice even if the loads were high. He kept on working that hard during the season, and he was simply irreplaceable as captain and assistant coach.”

But not only Bochenski had a good season: local players Roman Starchenko and Nikita Mikhailis both had career years for Barys. “They are very talented players,” Skabelka says. “Nikita played almost the whole season in the top lines and with the man advantage. It’s hard, however, to say what exactly allowed him to do a step forward. Most likely, in the team, there was such an atmosphere that everyone wanted to give their best.”

How can you call a miracle a result that is built through 62 games? A miracle is when Team Belarus defeats Team Sweden at the Olympics: The Swedes had their top players, all of them winning multiple accolades, yet the Belarusians just hit the ice and defeated them in the quarterfinals. Our result wasn’t a miracle, but the fruit of our hard work.

Another player who had a good season is Pavel Akolzin, about whom the coach wasn’t sure this summer. “Yes, I wasn’t sure about him,” the coach admits. “He’s a power forward, a big guy, but his game didn’t match his size. “Our staff saw him as a two-way player, even if he has a good shot. Often, he would surprise us during practices but failed to show his best side during the games. Maybe because of his lack of confidence, maybe for his lack of experience. However, we talked and worked a lot with him, and I think that near the end of the season he started showing his true potential.”

During the season, forward Dustin Boyd was back to the Kazakh capital after starting the season with HC Dynamo Moscow. “I didn’t have to think long about his acquisition,” Skabelka tells. “We had a road game in Moscow. Dustin wasn’t in the lineup, and we asked him why. He said that the team was seeking a trade, and we decided to get him back to Barys. Boyd was very good in the role we projected for him. He needed some time, but in the playoffs, he was one of our best players. Boyd worked hard on defense and in penalty killing situations. He also scored points. Dustin is a true hard-worker.” 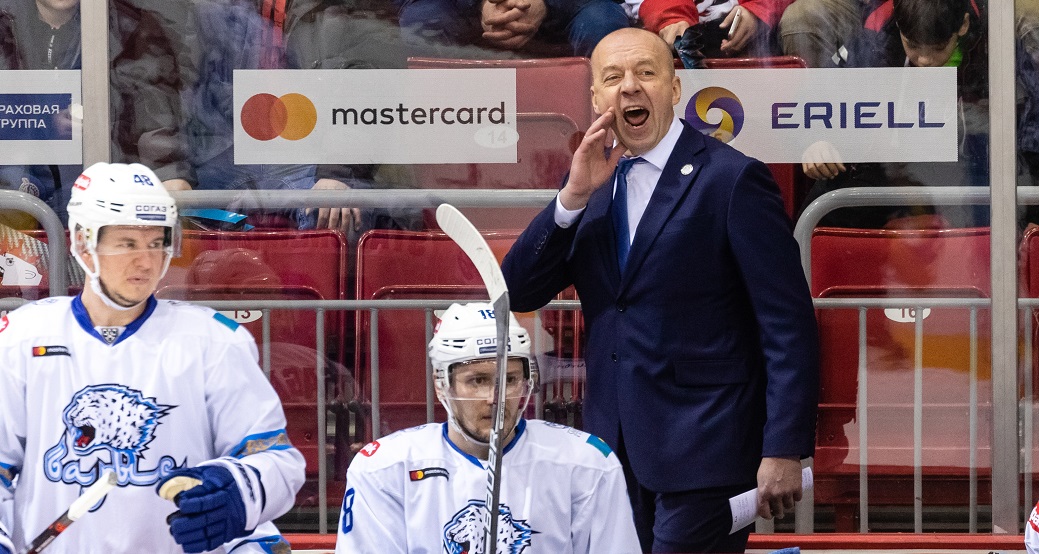 “Our result wasn’t a miracle, but the fruit of our hard work”

In the start of the season, Barys lacked consistency. The team won many games but also had spectacular backfires like when they lost 3-7 to Ufa. “You know, it wasn’t easy to get the players to understand that we can get results only by attacking,” Skabelka explains. “We showed the players some things, and they also understood some themselves. For example, we had terrible figures in penalty killing. Everything got back to normality only through hard work and playing games. The team that played two tournaments during the preseason and the team that played later are two very different teams”.

When a team is the second in its Conference, good games are going to happen. And Skabelka remembers about them: “I think that our best game was against CSKA in Moscow. We showed a fantastic hockey that night. We also had some bad games, but I think that the most important thing is how the team reacts to a defeat. If after a defeat a losing streak begins or the team starts playing bad, then it’s a problem. But if we lose a game and then the team reacts, then I don’t really see much negative. I said more than once during the press conferences that I like the way my team reacts to the losses.”

Barys won 5-2 in Moscow against CSKA, not much after guaranteeing itself a playoffs spot on January 19. It looked like the team hit its peak by then, but Skabelka doesn’t agree. “I don’t think we had a peak then; we more or less played the whole season without breakdowns. We had moments when we lost two or three games in a row, but we often managed to get some points in those stints. But to speak the truth, I think that we should have planned our last trip to the Far East differently. However, this is a lesson for the future, and I hope that there won’t be any more in the schedule such series right before the playoffs. If we have this kind of series again, we’ll react differently.”

Many called such a result by Barys a “miracle,” but once again, Skabelka didn’t agree with this view. “How can you call a miracle a result that is built through 62 games? A miracle is when Team Belarus defeats Team Sweden at the Olympics: The Swedes had their top players, all of them winning multiple accolades, yet the Belarusians just hit the ice and defeated them in the quarterfinals. Our result wasn’t a miracle, but the fruit of our hard work. Last year, Barys didn’t get to the playoffs, and this summer the team changed many players. However, the team found itself and believed in its strength.” 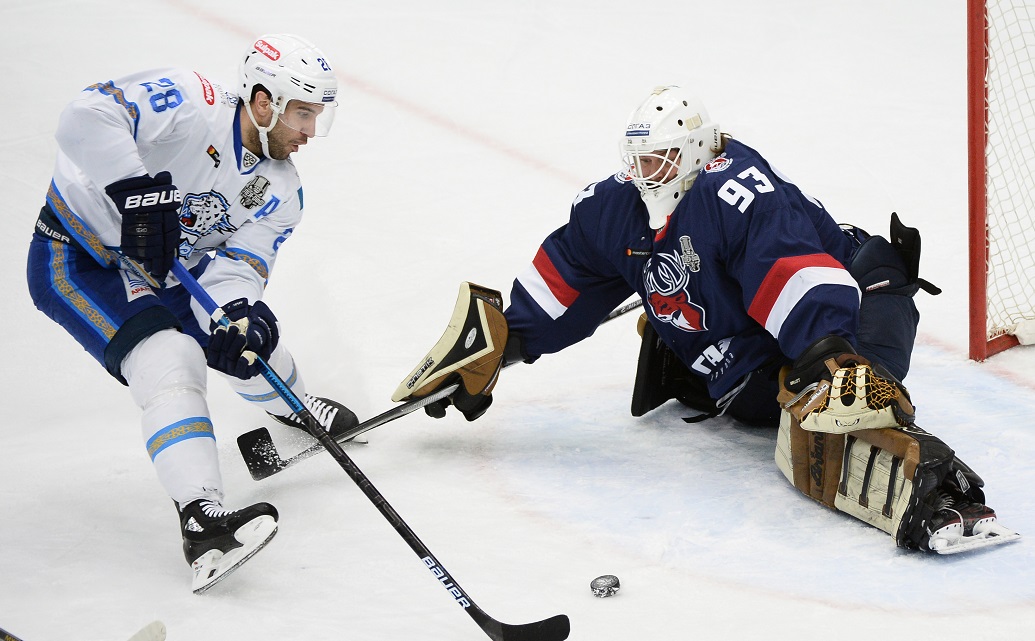 In game three, Barys suffered from a heavy 5-0 loss, but Skabelka feels like the turning point of the series was another one. “I think that the worst for us was Chudinov’s goal in game four. However, it’s hard to highlight a single moment. After that 5-0 loss the team reacted well, we analyzed the game, and in the next match, we were tied at one for a long time. And then that goal… After it, we lost discipline; there was that collision between Dietz and Shumakov. Dietz didn’t have bad intentions; it was a normal hockey play. However, we had to play five minutes on penalty killing, and we simply run out of time to rally back.”

You can say that Bochenski is the symbol of latest years’ Barys. He is such a huge presence in the locker room. Brandon had a great preseason, he was the first rank for many tests, without missing a single practice even if the loads were high.

In the fifth game, however, Barys was up by two goals. But then everything fell to pieces for the Kazakhs. “In that game, our defense was mostly made up of players who spent the season in the Kazakhstani league,” Skabelka explains. “This is why in the first period we managed to get ahead thanks to our offensive play. However, in the second period, Avangard changed its game and started giving us a lot of pressure. Moreover, we didn’t manage to play well on penalty killing in the series as I think that Avangard scored 70% of its goals with the man advantage. We were at its same level on even strength, but we played worse with the special teams.”

The bench boss has still one year on his contract. He already started programming the next season for his team. “All the players with a Kazakhstani passport are going to stay,” the coach says. “Regarding imports, Dietz has still one year on his deal, and we’re dealing with the other international players. I am not going to speak out names, but we are planning to part ways with some of them. We also want to strengthen our goaltending lineup. For now, we’re at the negotiating stage.” 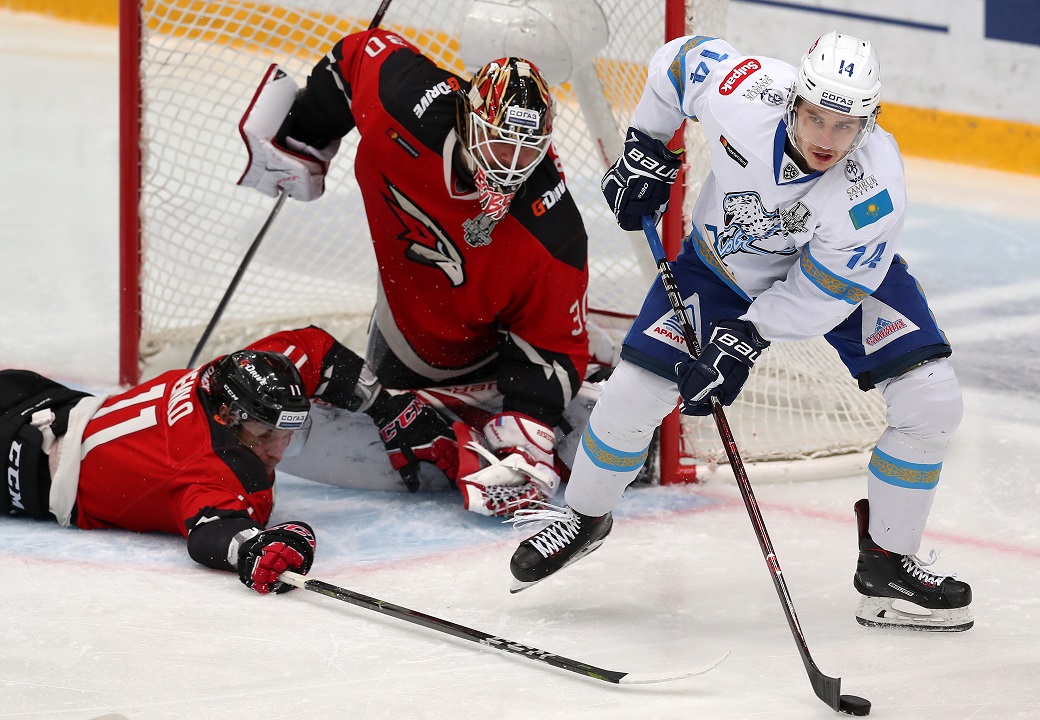 Born on January 20, 1971, in Minsk, Belarus. Merited Master of Sports of the Republic of Belarus.