Salavat Yulaev roared back into contention in the Eastern Conference final with an impressive 5-1 victory in game three. After two losses on the road, Ufa really needed to close the gap on Avangard when the action moved from Balashikha to Bashkiria – and a powerful first-period performance delivered just the right result.

Three unanswered goals in that opening frame put Salavat Yulaev in control of the game and Nikolai Tsulygin’s men never relinquished their grip. The visitor got one goal back on the power play in the second period but two further goals on Avangard in the third secured a convincing final scoreline as Ufa closed to 1-2 in the series.

The day also saw Teemu Hartikainen set a new club goalscoring record for Salavat Yulaev in the KHL – he moves to 114, ahead of Igor Grigorenko’s mark. Linus Omark took his assist tally to 199 for the club, beating Alexander Radulov’s record of 197 helpers for Ufa.

The opening stages were fairly even, but once the host broke the deadlock it quickly jumped to a decisive advantage. The opening goal was a bolt from the blue, with Artyom Sergeyev firing in a mighty effort from the point that flew past Igor Bobkov just as it seemed that Avangard had pushed away the initial danger from a Salavat Yulaev attack. The second arrived barely three minutes later as the home team’s prolific first line conjured a devastating counter attack. Teemu Hartikainen began the play in his own territory, sending Linus Omark forward before the Swede teed up Joonas Kemppainen for the finish. The Avangard defense was left chasing shadows as Ufa’s stars passed their way from one end of the ice to the other.

In the final minute of the opening frame, Hartikainen added a third. This time, play started with a face-off in the Avangard end and Omark combined with Philip Larsen to send the Finn behind the net. Hartikainen circled out to the slot, withstood the challenge of Alexei Emelin and fired home with the visiting defense in disarray once again.

Bob Hartley looked to reshuffle things at the intermission, replacing Bobkov with Ivan Nalimov. But Avangard also suffered a blow when in-form forward Taylor Beck suffered an injury midway through the second period and was unable to continue in the game. Beck’s productive streak ended after 10 games, with the Canadian missing the chance to overtake Jaromir Jagr’s club record in KHL play. There was some hope for the visitor late in the frame when Denis Zernov, back in the team after injury, fired home a power play goal to reduce the arrears. However, there was little evidence of Salavat Yulaev losing control of the game – the teams traded attacks consistently throughout the middle session.

In the final session, Avangard threw everything in to chasing the game. Unfortunately, that committed approach led to all-too-frequent penalties: on four occasions the visitor was left killing minor tariffs and that made it impossible to generate the necessary offensive momentum to change the course of the game. Tellingly, Salavat Yulaev was able to limit Avangard to just five shots at Nalimov in the third period. Then, to rub salt into the wounds, the home team produced two late goals to turn a convincing victory into a lopsided scoreline. Maxim Mayorov scored into an empty net with 70 seconds to play and a defensive breakdown in the last minute gifted Pyotr Khokhryakov the chance to make it 5-1.

It all added up to a day that could change the course of the series. After looking to be in all sorts of trouble after Sunday’s 1-4 loss on the road, Salavat Yulaev today looked like a team clicking into form once again. Thursday’s meeting here in Ufa could see the series tied up at 2-2 unless Avangard can bounce back quickly.

We expected them to come out hard in the first period but we still allowed three goals. We tried to get back into it but we couldn’t manage it this time. We’ll learn from it. We got away from our game plan, we took a lot of penalties. We got upset and that led to those penalties. Ufa just played better than us today, and that caused all of our problems. But I never thought that we’d sweep Salavat in this series.

We had a great start and we had it won in the first period. After that, we played according to the situation, keeping it tight and not letting them back into the game. At 3-1, though, we relaxed a little and we weren’t good enough on the power play in the third period. Those are chances you always need to take. Burmistrov came back to the team and brought us something new: freshness, movement. 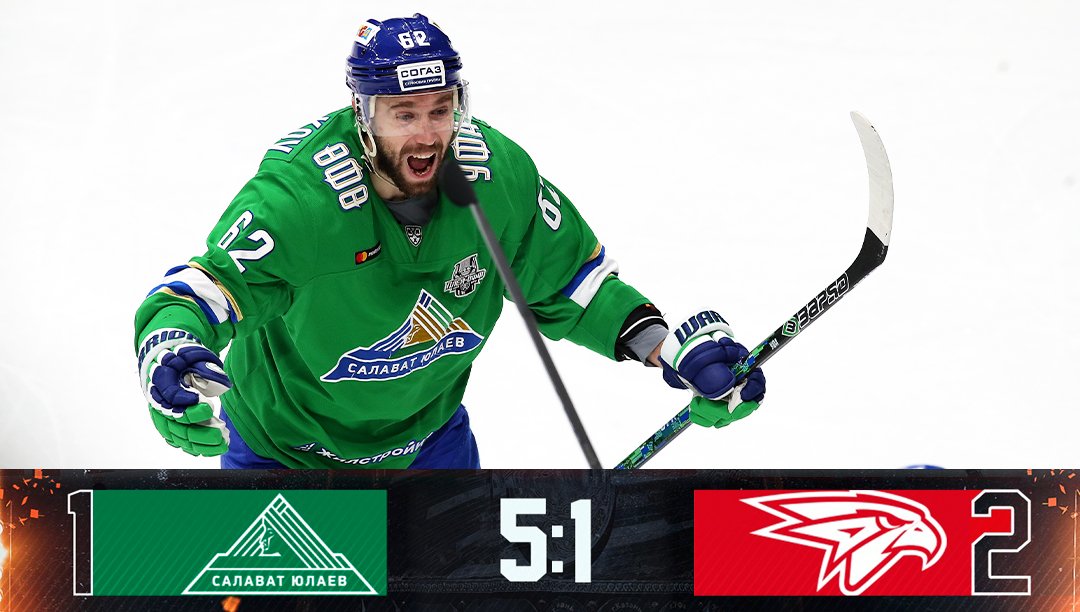