Salavat Yulaev too much for Avtomobilist. Ufa reaches the East finals

The lower seeds’ revenge continues in the Eastern Conference, as Salavat Yulaev – the sixth team in the East standings – defeated the team who dominated most of the regular season in only five games. Ufa keeps on having a strong Nordic accent, with fantastic performances coming from goaltender Juha Metsola, and forwards Linus Omark, Joonas Kemppainen, and Teemu Hartikainen. On the other side of the Ural range, Avtomobilist couldn’t make the transition from the regular season to playoffs hockey, and this cost them the access to the Conference finals.

Salavat Yulaev’s bench boss Nikolai Tsulygin did everything well for the second series in a row. The top line is mostly responsible for the result – with some much-needed secondary scoring coming from the likes of Vladimir Tkachyov, who are delivering in this postseason – when the line of Alexander Kadeikin, Vladimir Zharkov, and Vyacheslav Solodukhin deals with the opposition’s first line. They managed to keep Sergei Mozyakin out of the scoresheet in the first round, and they equaled the task in the Conference semifinals not allowing to score a single goal to Nigel Dawes, Stephane Da Costa, or Anatoly Golyshev. The only thing they managed to bury a chance; another unit was on the ice for Ufa.

Ufa’s top unit has been incredible in the second round. Teemu Hartikainen now leads the League in points scored (tied with SKA’s star Nikita Gusev) with 14 (6+8) points and reaches the former team’s captain Igor Grigorenko for goals scored in the Green jersey. Joonas Kemppainen is tied at second for most goals scored, with seven, and for game-winning goals, with three. The two Finn players and Linus Omark lead the League in the plus-minus stat (plus-11 for Hartikainen, plus-10 for Kemppainen and Omark). On top of that, Omark and Hartikainen are the only two players in the League to log more than 22 minutes a night on average.

Discipline, team play, and talent: this is Tsulygin’s recipe that allowed Salavat to reach the Eastern Conference finals for the fifth time, with their latest appearance in 2016 – when they lost 4-1 to the eventual Gagarin Cup champion Metallurg Magnitogorsk.

Avtomobilist had a tremendous regular season, but in the playoffs, they weren’t as dominant. Martemyanov’s team played well against Traktor, but they couldn’t adapt to the opposition when they faced a well-oiled Salavat Yulaev. Moreover, they also lacked discipline, with Stephane Da Costa getting two match penalties during the playoffs for a total of a League-leading 50 PIMs.

The Ural team also lacked reserves, and when the top unit was stuck in a goal drought, the second and third lines couldn’t step up and get quality chances to score. That said, Avtomobilist is on the right path. They improved a lot since the 2016 ownership change and most likely next year they’ll be back stronger than ever, although they most likely need to gather more depth and try hard to retain some of the top players whose contract is running out next April. Names include top goalie Jakub Kovar, import forwards Dan Sexton and Stephane Da Costa, and valuable domestic players like Denis Bodrov or Anatoly Golyshev.

The Yekaterinburg team also hit a roadblock in Juha Metsola, who is in tremendous shape and denied most of Avtomobilist’s efforts. After the series, it may be safe to say that the team and the coaching staff lacked some postseason experience, the kind of experience they can have gathered this year and that can mean an even stronger 2019-20 campaign for Martemyanov’s troops.

The clash between Salavat Yulaev Ufa and Avangard Omsk will kickoff on Friday in Balashikha. 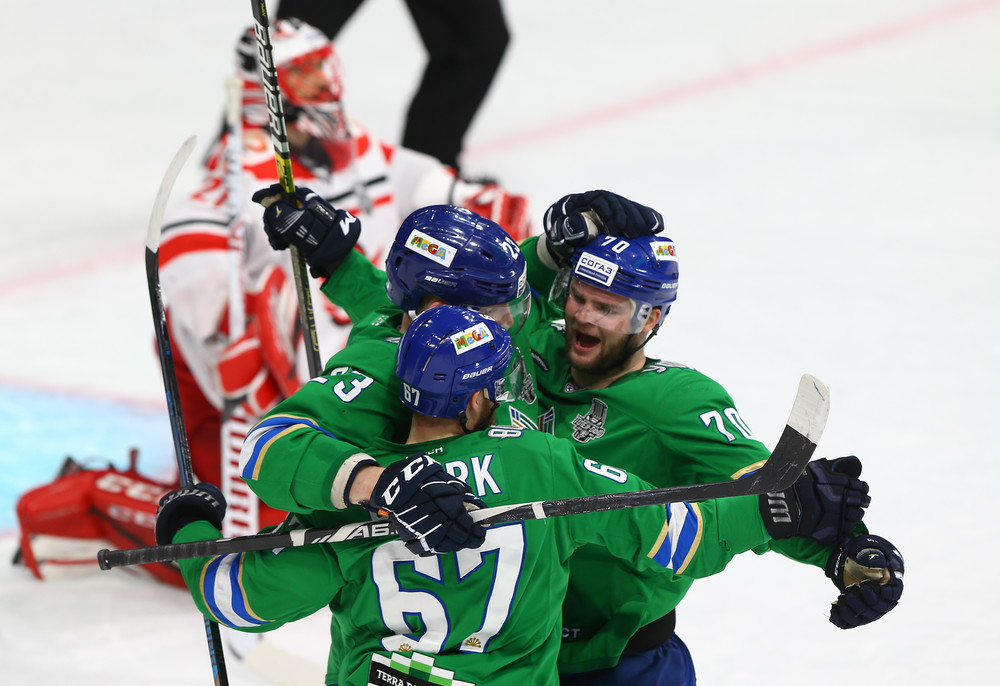