No surprises from Dynamo. CSKA gets to Western Conference finals

Those who were expecting an upset in the Western Conference semifinals were disappointed as the Red Army skated past HC Dynamo with relative ease as they won the series 4-1, giving to the Krikunov’s team only one win in game two. CSKA felt no panic when the Blues-and-Whites tied the series at one after a memorable 22-save shutout by Ivan Bocharov and an OT winner scored by Vladimir Bryukvin.

Throughout the whole series, CSKA’s defense was incredible. They limited the opposition to only one game with more than one scored goal (the fifth – and last – game) and had a tremendous effort against HC Dynamo’s top unit of Vadim Shipachyov and Dmitry Kagarlitsky, who only scored once in the series. With their top offensive weapons shut out by the Red Army defensive corps, Krikunov had little more to do than putting his stakes on excellent goaltending.

Alexander Yeryomenko was instrumental more than once, and Bocharov backed him up providing a good defense of the crease, but it wasn’t enough. In an odd-looking, but inevitable move, Krikunov split the Shipachyov and Kagarlitsky duo, hoping to spread firepower in different combinations. Vladimir Bryukvin joined Shipachyov and Miks Indrasis in the top unit, but the move, in the end, didn’t pan out, as the Blues-and-Whites could not get past the Red Army’s defense.

Dynamo enjoyed several powerplay chances, but they could crack the CSKA’s box only in the fifth game. A bit too late to have a realistic opportunity to get back in the series: in spite of the close score, even in the last games CSKA outplayed the opposition during most of the game, and only the team’s resilience and will to valiantly fight gave the Red Army a couple of thoughts after the goals.

It was a good season for Dynamo. The team played well in the regular season, and the Shipachyov and Kagarlitsky dynamic duo were for long tracts the best in the League. Alexander Yeryomenko had yet another excellent season – but this can be considered a double-edged sword: the goalie isn’t getting any younger, and sooner or later Dynamo will have to find another starter. Many players had good regular seasons and a decent showing in the playoffs, merely the Red Army was too much for them. It was noticeable the progress of Yegor Zaitsev. The 20-years-old defenseman was solid for the Blue-and-Whites in both the regular season and the playoffs and has all the chances to grow into a critical player for Dynamo.

Dynamo’s cross-town rivals got worried in game-three when the League’s top sniper in the regular season Kirill Kaprizov left the ice after a collision with Igor Makarov. Kaprizov eventually missed game four but was back for the fifth game, where he contributed with an assist to the team’s final triumph.

The Red Army looked once again almost unbeatable in these playoffs. Only a monumental effort by Dynamo translated into a temporary draw in the series, but much more will be needed to really trouble the well-oiled defense led by an outstanding Ilya Sorokin between the pipes. Among forwards, Mikhail Grigorenko, Kirill Kaprizov, and Linden Vey were the usual force for CSKA, who also enjoyed secondary scoring coming from the likes of Maxim Shalunov and Konstantin Okulov.

On defense, Mat Robinson scored one of the crucial goals in the series when he scored the go-ahead goal for CSKA in game-four with only 25 seconds to play. The Canadian defenseman produced four points in the five games of the series, but Nikita Nesterov is still the top-scoring blueliner for CSKA. The second top-scoring defenseman in the League has seven points in these playoffs so far, but he is currently in a four-game drought.

Facing CSKA will be hard for any other team. Igor Nikitin’s troops feature not only a strong lineup but also a systemic strategy that currently can be considered second to none in the KHL. Getting to the Western Conference finals was the minimum task for Nikitin, and he reached the goal. Can he get to the Gagarin Cup finals for the second time in a row?

In the Western Conference finals, CSKA will face SKA for the fourth time in the last five years. Game-one is scheduled for March 28 in Moscow. 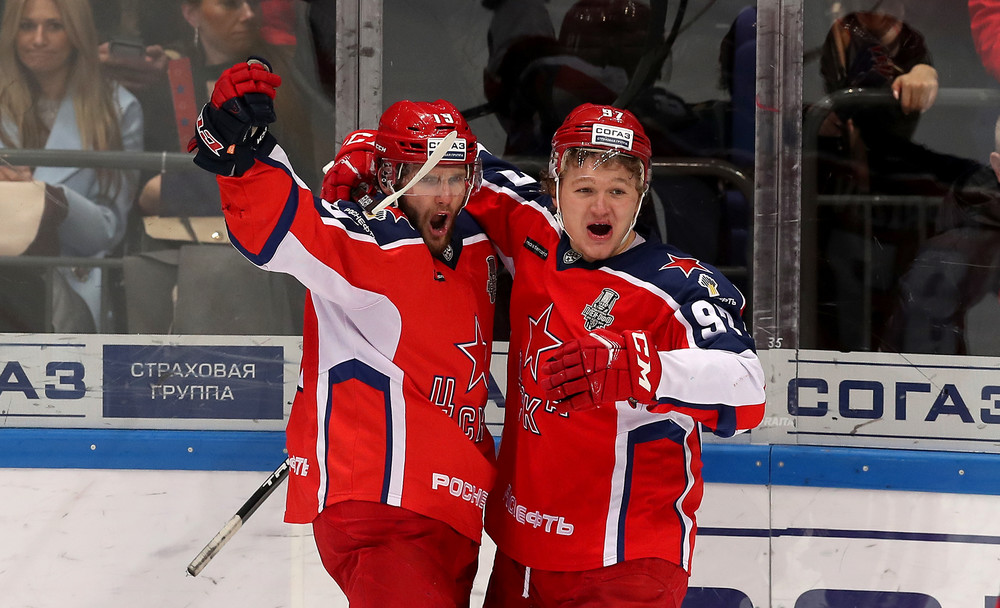