In the Western Conference, the battle for the final playoffs’ spots was one of the most dramatic in the recent years. Dinamo Riga couldn’t get one, but they fought until the end. Dinamo’s chairman Juris Savickis declared that Girts Ankipans will stay at the helm of the team next year as well. In this KHL.ru exclusive interview, the bench boss explains what Riga lacked to get in the top-8, told how they noticed Mathew Maione in the Slovak league and called out this season’s heroes.

After a couple of very disappointing season, Dinamo this year was back into playoffs contention, and people started flooding the Riga Arena almost like they were in the team’s golden age in the KHL. The team fought hard, as confirmed by Ankipans: “We did all we could to get to the playoffs,” the coach says. “However, if you don’t get to the postseason, you’re going to think that you could do something more. We lacked only a few points to get to the playoffs, and we’ll try to improve for the next season. That said, I think that everyone in Riga – the players, the coaches, the boards – gave their hundred percent.”

Ankipans and the rest of the team’s personnel are now analyzing the season in the research of what Riga precisely lacked to miss a spot in the top-8. “We’re now in that period when the season is over, and it’s time to rethink everything that’s happened, trying to understand the weak parts of our game and think about the future,” Ankipans explains. “Some nuances prevented us from getting to the playoffs. For example, the period after the trip in the Far East, when we played six games without getting a single point. If we got two or three points in these games, then probably we could have found ourselves above the playoffs’ line.”

One of the surprises of the season was Dinamo defenseman Mathew Maione, who not only showcased excellent hockey, but also an intriguing artistic soul. “This summer, the rest of the staff and I spent a lot of time to observe potential new players,” Ankipans remembers. “We knew that Maione was a creative guy and that the public will fall in love with him. However, as a first thing, we analyzed his skills on the ice. We analyzed his stats, and we understood right away that he is a high-level offensive defenseman. Of course, if a player is going to score a lot of points in a team like Dinamo Riga, then he will become a fans’ favorite right away. But we couldn’t even imagine that Maione would get to international glory,” Ankipans adds with a hearty laugh.

“We understood that we needed a solid option on the blue line, a player who can help to build our offensive plays and be useful with the man advantage,” the coach goes on. “From one hand, we wanted to make Dinamo a rock-solid team. From the other hand, we needed players who can help us with their offensive production. Any coach wants to have stars playing for him, and I think that our relationship with Maione was a win-win situation. He had what he wanted: a big role in the team and a chance to score many points. The team gained a great player in him. It definitely was a good deal.” 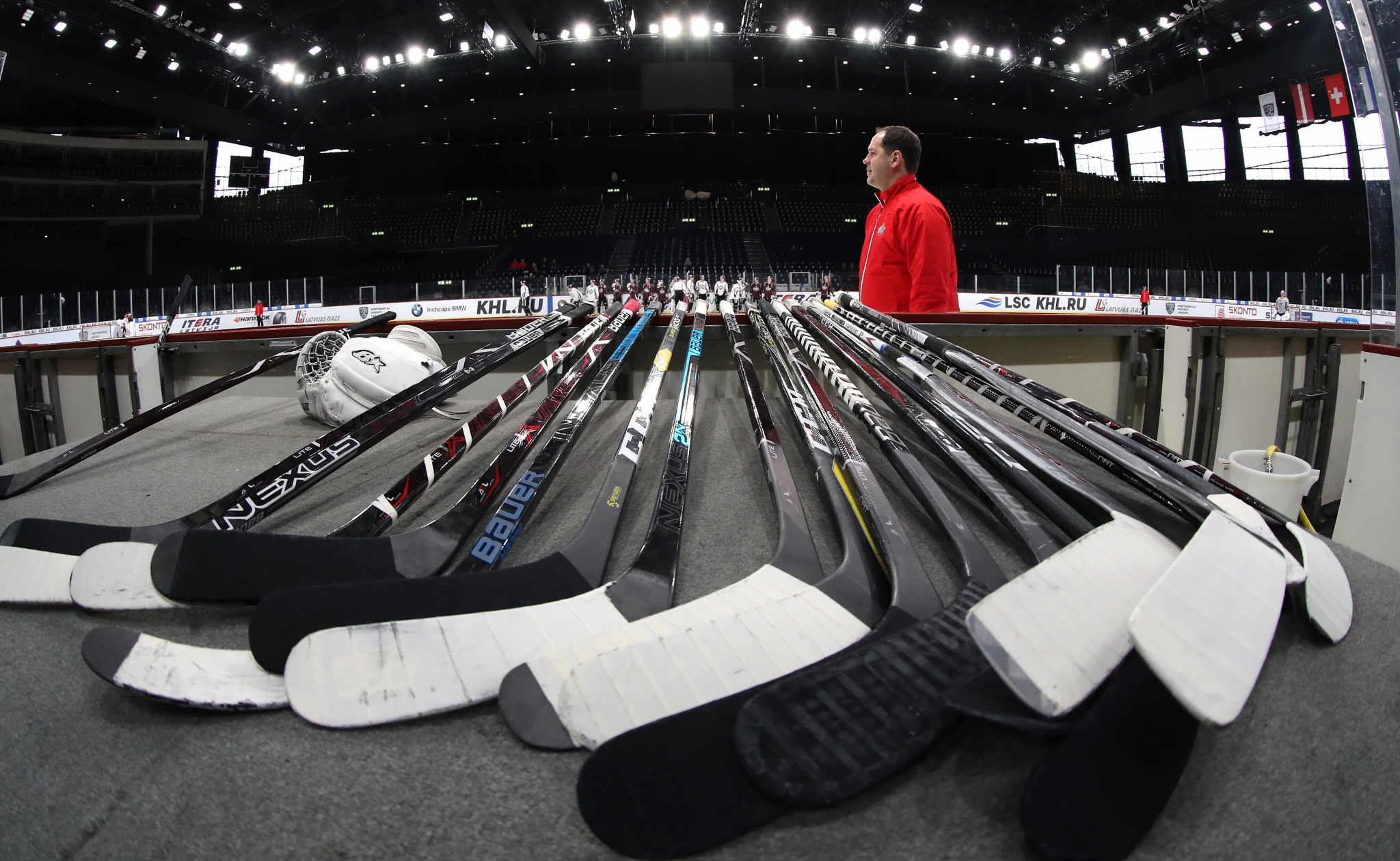 “We always hope that all is good, but of course, we had a plan B”

Ankipans also explained that signing Maione was not agents’ games, but that he and his staff actively scouted him in the Slovakian Extraliga. He and Swedish forward Linus Videll formed a formidable tandem, who had a fantastic first half of the season but then had some sort of flexion in the middle, differently from HC Dynamo’s Shipachyov and Kagarlitsky. “The season was a long one, and Shipachyov and Kagarlitsky also didn’t score in all the games,” the coach explains. “I wouldn’t say that they were less efficient. Maybe the opponents studied them and started paying more attention to their chemistry. Also, Maione had to get used to the KHL. It’s a difficult league to play in, where flights and rest between games play a crucial role. I think that they had no flexions during the season and that they were dangerous in any game we played.”

However, at one point, Linus Videll was sidelined with an injury. As Ankipans admits, that injury had its role in Dinamo Riga’s playoffs push. “Of course, we had to pay the price for having Videll missing games. He suffered from some injuries, and also Maione had to fight against them. But I am not going to use it as an excuse. You can’t imagine hockey without injuries, and a coach must be able to cope with that. I am glad about how the game played without their leaders and how they played for them when they were off. We had to get to the playoffs anyways, with or without Videll. Of course, with Linus, we would have a better chance.”

With one of its key players injured, Dinamo had to resort to its plan B. “We always hope that all is good, but of course, we had a plan B. For example, in the start of 2019 we faced Lokomotiv, HC Dynamo, Severstal, and Salavat Yulaev without both Videll and Maione. Yet we managed to gather four important points from these games. The team was able to fight and get results even without them, even if it was incredibly hard,” Ankipans explains how the team reacted. “The players need to spend more energy, focus more and commit more. Of course, it’s always easier to play when you have players who can decide the outcome of a game at your disposal. You can get to the ice and think that the team is going to score one or two goals thanks to the leaders, and it is easier for the players.”

But Dinamo Riga not only had Maione and Videll. They also had one of the top penalty killing in the League. “Special teams are always of the utmost importance,” Ankipans admits. “Videll and Maione were awesome on the powerplay. However, we had true heroes playing in penalty killing and to me, they aren’t less important than the ones who score with a one-man or a two-man advantage. I’m talking about McMillan, Meija, Darzins and many others who played in these hard situations.”

Just like many other non-contending teams, Dinamo Riga had problems in the second period, mostly due to the less depth. “I wouldn’t say that we generally played badly in the second period. However, the second period is a particular part of the game, and our depth was one of those factors which had its role in not helping us get to the playoffs. In the second period, the most experienced teams have an advantage, as you need to play more responsibly. It’s the period with the most nuances, when a penalty, a mistake during a change or imprudent dumping of the puck may get your team playing in its own zone for half of the time. We had a new generation of players coming, and this season was critical for them to gather the needed experience. It’s in such important moments that the younger players become accustomed to pro hockey and understand how to correctly act.”

On the ice, the team’s season wasn’t the best, but from a media point of view, it was an A+ year for Dinamo, considering the outdoor game against Dinamo Minsk, the KHL World Games in Zurich and Maione’s show at the All-Star Game. Ankipans is visibly satisfied with it. “Our team has a huge experience in these events. All this didn’t bother us, quite the opposite. ‘We play for the fans’ is a ubiquitous phrase, but for Dinamo Riga, it is true in the deepest sense of the words. We want to play for our fans, and it’s vital for us. Our fans believe in us, and they show it at any home game. We are glad to have such warm attention. And the best thing is that it’s not an artificial thing, but we deserve it with our game.” 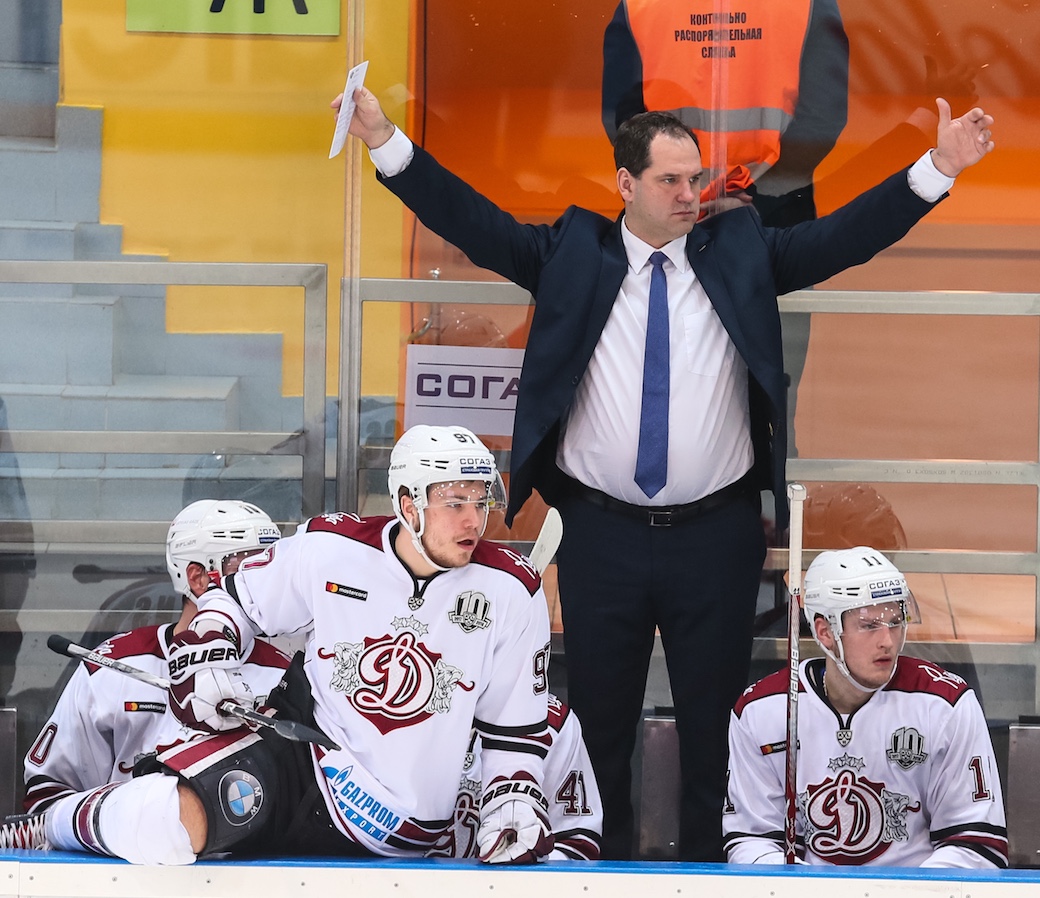