Dynamo missed its first chance to wrap up its series against Jokerit, going down 2-1 in a tense game in Helsinki. much-changed Lokomotiv team bounced back from two road losses to win 3-0 at home to Sochi and take a 3-2 lead in the series. Dmitry Kvartalnov established a new attacking combination and Brandon Kozun and Artur Kayumov responded with two points each.

Alexander Salak produced a shut-out in his first playoff appearance of the year as Lokomotiv moved back in front in this match-up against Sochi. The Czech international was an unused deputy in the four previous games as Ilya Konovalov continued to assert himself as Dmitry Kvartalnov’s first choice goalie. Today, though, the roles were reversed – and it wasn’t the only big change that paid off for the head coach.

Kvartalnov also opted to send forward Brandon Kozun to the fourth line alongside Artur Kayumov and those two combined for the opening two goals of the game. Daniil Apalkov, named as 13th forward, was also on the scoresheet, while the experienced Finn Petri Kontiola missed out.

The opening frame was dominated by a string of penalties. There was relatively little coherent play from either team, although the host looked the better of the two teams. After the intermission, though, Loko made a livelier start after it killed off an outstanding penalty. Sochi was moved to call a time out in the 24th minute as the pressure on Dmitry Shikin’s net intensified, but the home team went in front on the next shift. Fluid passing through center ice culminated with Artur Kayumov slinging a well-weighted feed to Brandon Kozun at the far post; the Canadian finished off the job with a wrister and Lokomotiv was in front.

Kozun and Kayumov swapped roles five minutes later as the host doubled its lead. Kozun led the rush deep into Sochi’s zone before slipping a sweet little pass outside for Kayumov to rifle home at the near post. Late in the middle frame, Yegor Korshkov produced the best of some fine assists when he flicked a no-look pass through his own legs from behind the net to present Daniil Apalkov with Lokomotiv’s third goal. That was the end of Shikin’s evening, and the end of Sochi’s realistic hopes of taking a lead back home with it. A 21-8 shot count in favor of the home team told its own story.

In the final frame, Sochi enjoyed the bulk of the territory and possession but the Lokomotiv defense did a fine job of keeping the visitor to the outside. Salak had just three saves to make despite all the play in front of his net and Lokomotiv eased to victory.

Lokomotiv can settle the series on Thursday when the action returns to the Black Sea coast. However, to do so the Railwaymen will have to break a sequence of five home victories in five games so far in this contest.

We’ve got our noses in front. Now we need to try and win on the road to wrap up the series. We’ll get on with preparing for the next game.

The second and third periods were very different from the first. Were you psychologically prepared from the start?

I think they are all pro hockey players. It’s our job to play under pressure, in tense situations. If you can’t do that, I guess you won’t be playing in this league.

It’s a disappointing result. We need to keep our heads up. Today we didn’t manage to get enough shots on the net, enough threats around the goal and you can’t win games like that. We didn’t go to the net, we didn’t shoot when we had chances, we were always looking for something extra. I don’t understand myself what we were looking for. But it’s a series to four victories, we’ll keep going.

Sochi couldn’t match Lokomotiv’s movement tonight. Are you running out of energy?

Why did it happen?

I think the players were anxious. They felt that they had something to lose. 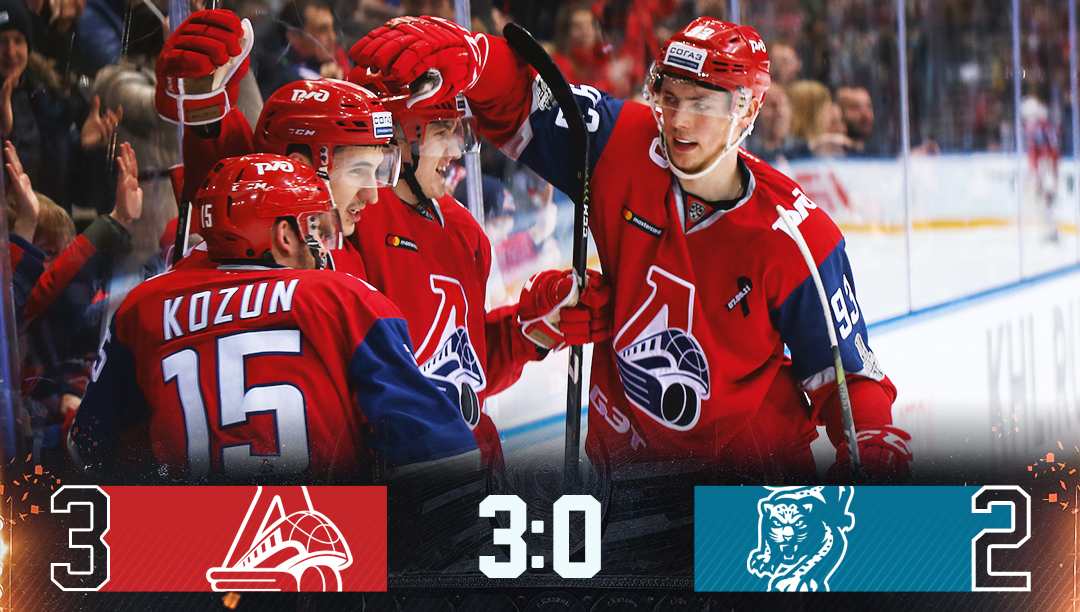 Jokerit produced forced a home win over Dynamo to keep this series alive despite a late rally from the Blue-and-Whites. Goals from Jesse Joensuu and John Norman made the difference for the Finns, Patrik Zackrisson’s late reply for Dynamo was not quite enough this time.

The early stages saw Jokerit turn the screws. Experienced Dynamo head coach may have been indulging in a spot of kidology when he suggested that only his first line could match the skills of the Helsinki forwards, but the evidence of the first period bore out his claims. The Finns were on top from the start and arguably deserved more than a solitary goal for their efforts. That strike came early, with Joensuu redirecting a Brian O’Neill point shot through Alexander Yeryomenko’s pads in the fourth minute. Dynamo was limited to just four efforts at Janis Kalnins while Jokerit generated more pressure in front of Yeryomenko, especially in the middle of the frame when Alexei Pepelyayev took a double minor.

However, the action quickly settled into a dour game of attrition. Dynamo began the second period with a flurry of activity in the Jokerit zone, and Kalnins made a notable save to deny Vadim Shipachyov seconds after the restart. But that momentum dissipated, only for Jokerit to struggle to take advantage. Yeryomenko made a big double save to deny Alex Grant and Henri Ikonen but otherwise not even a spell of 5-on-3 that last almost the full two minutes could spark a serious threat to the visitor’s net: Jokerit barely got a meaningful shot at the goalie in that time as Dynamo’s PK held firm.

Much of the third period went the same way. Jokerit struggled to put the game to bed while Dynamo toiled in its efforts to salvage something. The big moment came in the 53rd minute when Norman added a second for the host. Marko Anttila stormed into the Dynamo zone and looked to set up Norman in the center. The pass was slightly behind the Swede’s stick, but he showed some nifty control with his skate before flipping it high over Yeryomenko’s shoulder to make it 2-0.

That wasn’t quite the end. A late Dynamo power play saw Krikunov send out six skaters and the extra man paid off when Shipachyov played the puck from behind the net and Zackrisson’s one-timer squirmed through Kalnins’ defenses to halve the deficit. With two-and-a-half minutes to go, Dynamo had one last chance to force overtime but came up short. Jokerit held on and the series returns to Moscow on Thursday.

We told the guys that it’s too early to relax. We have to see this through from start to finish. We’ll prepare differently for the next game.

We started well in the first period but after the intermission we failed in that 5-on-3. In the third, I was really pleased with how we defended. We barely allowed the opposition to create a single chance. But then we picked up a couple of unnecessary penalties and created our own problems. 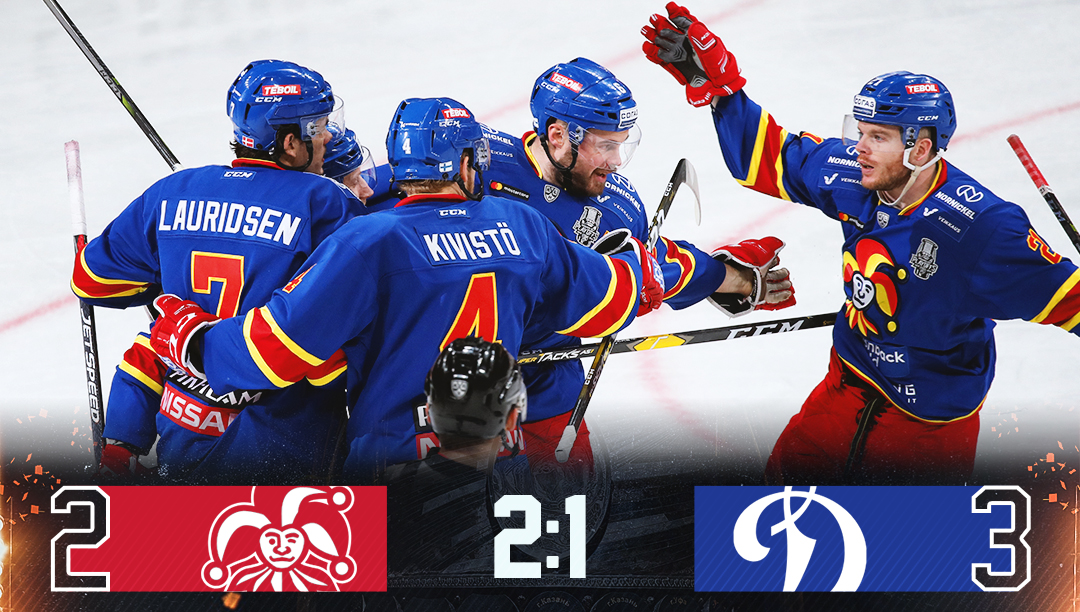