KHL.ru tells you the unique history of a real hockey dynasty: the family of Grigory Denisenko.

In the whole KHL history, very rare are the cases where a junior has his League debut during the playoffs. Moreover, not against an easy opponent, but against one of the KHL’s powerhouses – SKA St. Petersburg. In his first game in the League, Denisenko had 13 shifts and played a bit more than six minutes. That game, by the way, was the only time Lokomotiv managed to defeat the Army men. On March 20, in game-4 of the Conference semifinals, the 17-years-old showed all his character, fighting twice with Viktor Tikhonov.

“I was pleasantly surprised to see Grigory playing with the senior team. He was never called up to Lokomotiv, and he debuted on the playoffs right away,” says Boris Pushkaryov, one of Denisenko’s first coaches in Yaroslavl. “I think that he debuted right against SKA as the coach wanted to have a good look at him in such a situation. Only playing against the best teams you can understand what a player is about, if he is really able to play against strong opposition. But this is just my opinion, I can’t know what Dmitry Kvartalnov had in his mind.”

At the start of the current season, finally, Denisenko could etch his name in the game sheet not only in the penalty’s spaces but as an author of a goal. At the end of the third period of a game in Bratislava against Slovan, Lokomotiv was up by one goal. After an eye-catching entering in the neutral zone, Denis Alexeyev got past two opponents, got closer to the net and sent the puck on the opposite angle, where Denisenko was on the prowl. The play was so fast and furious that Denisenko knocked the net off. But it wasn’t a problem as immediately Grigory fell into the arms of his teammates. For the first time out of four this season.

“I collected the puck with which I scored in Bratislava and sent it home to my parents in Novosibirsk,” Denisenko says. He added right away that his parents had a tremendous role in helping him become what he is now. So is his older brother Nikolay, who also became a professional hockey player. 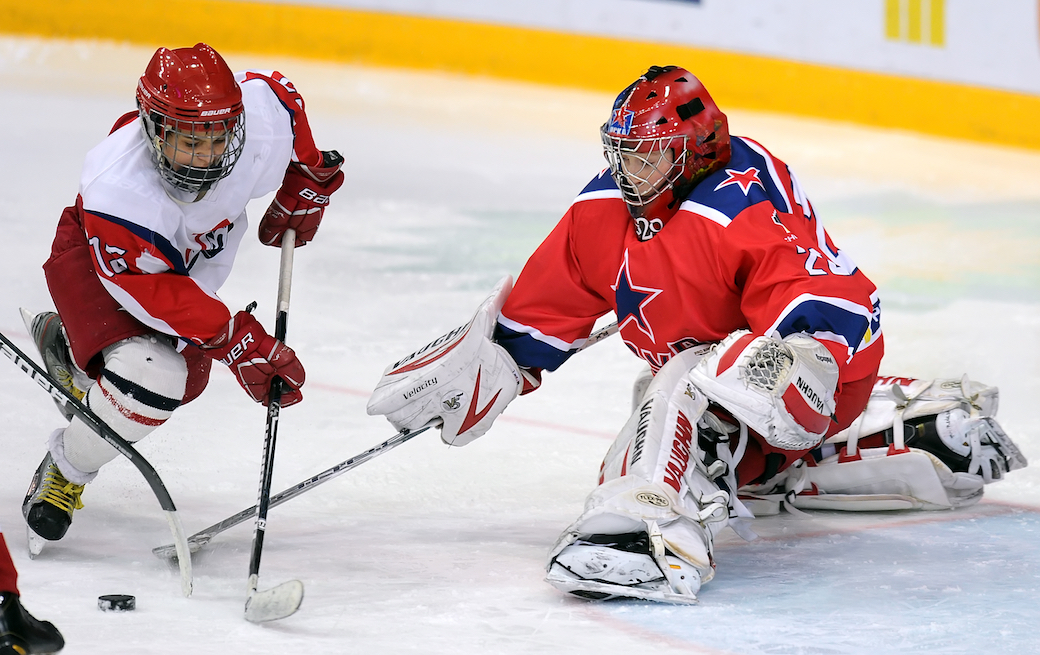 The Denisenko family is a real sports dynasty. Grigory’s father is a former hockey player, and one of the first things he did was submitting his son Nikolay to the local hockey academy. Just like Grigory, he spent many years in the Lokomotiv’s system, playing more than a hundred games for Loko in the JHL. “When I was three or four, my father got me to an open-air rink and taught me to skate,” Denisenko remembers. “I learned right away, the other guys were using a walker, but I could skate easily without it. When other 1999-born kids started playing organized hockey, my father asked if I wanted to go, I didn’t even need to reply ‘Yes,’ and everything started from there.”

In his childhood, Denisenko also loved playing football. He would spend the whole summer playing football with his friends in local playgrounds. But he played only hockey at a serious level. In Novosibirsk it’s quite obvious as the city is a real hockey town.

Denisenko admits that he started playing hockey following the footsteps of his older brother. “He always watches all my games. He analyzes things and always supports me,” Grigory says about Nikolay. “In our childhood, we were always playing together at home, I was always following Nikolay, always trying to repeat what he was doing and to become as good as he is. This helped me a lot in my development.”

In 2012, Grigory moved from Novosibirsk to Yaroslavl for a try-out. “A lot of it is up to how the coaches see things. The coach decides what guys stay in the team and who does not,” Boris Pushkaryov remembers. “I was impressed by his strong sides, and I understood what a player he is right away, that’s why I decided to keep him in the team. Grigory deserved a spot in the team and worked hard, even if he was our youngest player. However, even back then it was evident to anyone that Grigory is gifted with excellent reading of the game and individual technique. This is a rare combination.”

The Denisenko family moved from Novosibirsk to Yaroslavl, and one of the conditions was to find a place close to the rink. “My day would start at 6:30 AM, I jumped on the tramway for three stops as my practice started at 7 AM,” Grigory remembers. “We had already a big load, and then at 7:45 we could hit the ice. After it, I needed to go to school, then get back home to do my homework, and after it, I just practiced again. I went to sleep at about 9-10 PM.”

Even at school, Grigory was one of the best. Playing hockey didn’t hinder his studies at all. “I was checking all the time how my guys were doing at school,” Pushkaryov remembers. “I know that Grigory was an outstanding student. He’s always been a hard worker. He never got a C, and always was a positive kid.” Denisenko himself remembers that also his father was closely following his studies: “During my childhood, my father was always saying that the most important thing is to have a good education, to learn using my head and have success in studying,” Denisenko says. “My father was following me very closely, I always had my homework done. I never attended school just to go there sitting around, I really enjoyed it. My favorite subject was mathematics.” 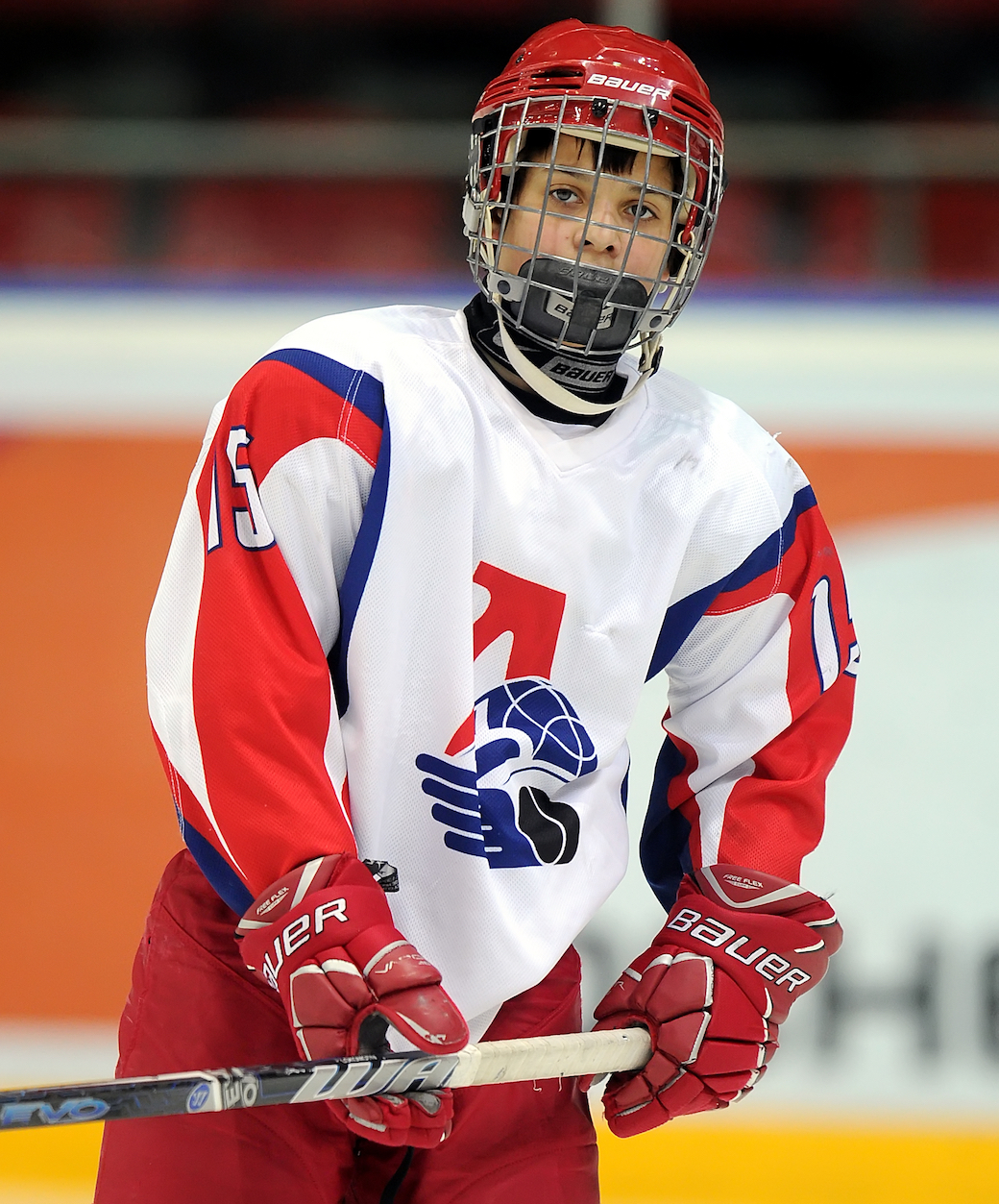 Denisenko’s career keeps on developing, and in 2017-18, after starting the year in the JHL, he joined Lokomotiv’s senior team for the playoff series against SKA St. Petersburg. Everyone was talking about his hit on Nikolai Prokhorkin and consequent fight with Viktor Tikhonov. However, now people associate Denisenko with goals scored and being one of the top junior talent in the League.

Grigory Denisenko was part of the Russian U18 national team that spent a season in the JHL. At the World Under-17 Hockey Challenge, Team Russia took home the bronze medal after losing the semifinals to Team Canada Black. In the tournament, Denisenko had 4 (1+3) points. That year, Grigory wasn’t called to the WJC, but he made the team the next year. At the 2019 WJC in Canada, Denisenko scored points in five of six games, while his incredible goal in the semifinals against Team USA kept hopes alive for the Russians. With 9 (5+4) points, Grigory was crowned WJC top scorer.

In February, Denisenko had his debut for the senior national team at the Euro Hockey Tour’s third stage in Sweden. 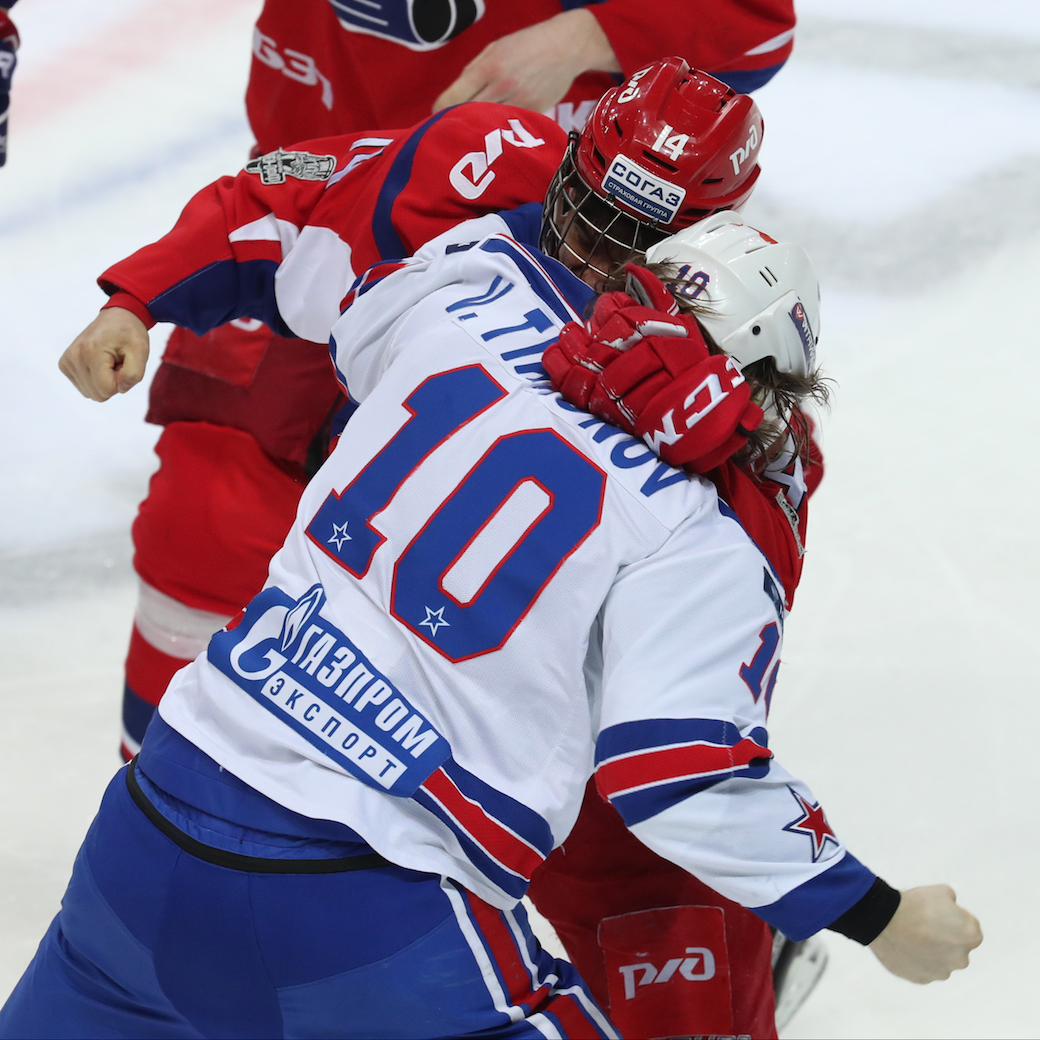 Grigory started the season with Lokomotiv, and in 25 regular-season games, he scored 6 (4+2) points.

“Last year I was probably physically not ready yet to play in the playoffs, I understand this very well this season,” Denisenko analyzes. “Differently from the JHL, in the KHL the players have more responsibility and there is more stress on tactics. It’s more of a team game, the game’s organization is completely different, there are more battles and it’s necessary to play a tighter defense. There isn’t much space to play. However, the more experienced guys told me to play the way I usually play.”

During an interview, Denisenko said that he follows most closely American forward Patrick Kane. In the KHL, he considers Nikita Gusev and Pavel Datsyuk his examples. “It’s really exciting to watch them, and playing against them is even better,” Denisenko admits. “I know on what I need to work. For example, my game close to the crease. Kirill Kaprizov is a tremendous example in the KHL of what I need to improve.” 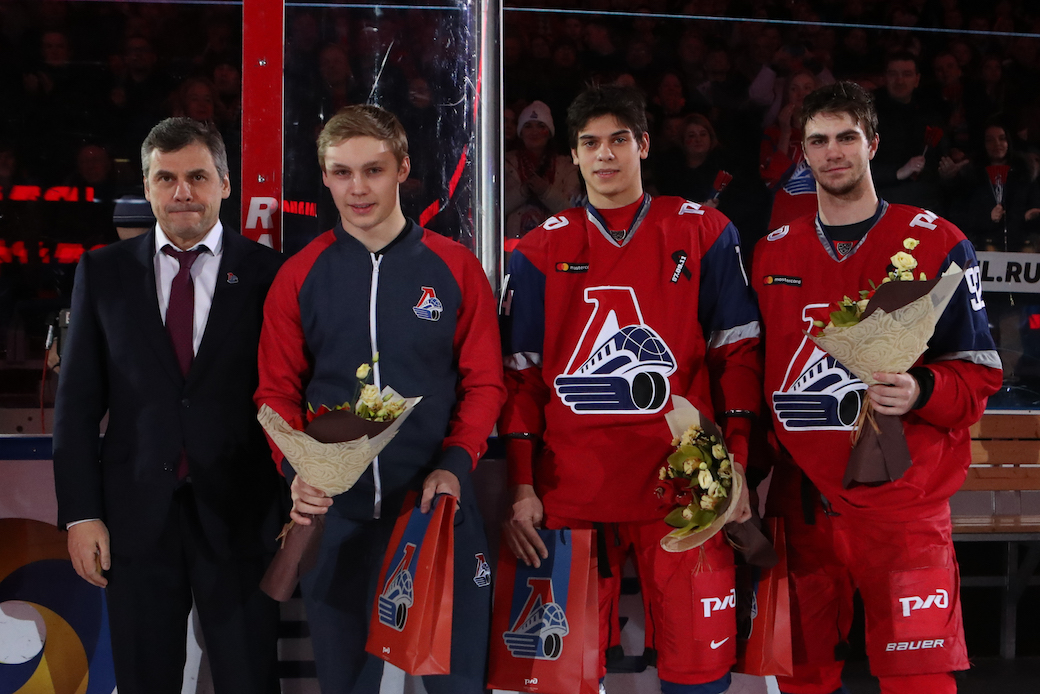