Across the Ural Mountains and debutant coaches. East playoffs preview

On Monday, the KHL playoff will start. The most exciting part of the season is finally here, and the teams will fight for the ultimate trophy in fierce battles and exciting clashes.

A few years ago, chances were good that the seeds were the opposite as they are now, but the recent Avtomobilist upgrades allowed the Ural team to reach its goals, and Traktor wasn’t able to replicate last year’s success. Considering how things developed in the season’s first stage, it’s hard to think that Chelyabinsk will be able to steal more than one game to Avtomobilist. Yekaterinburg’s most successful acquisition was Nigel Dawes – the forward finished the regular season in second place for points scored with 69 (28+41). Czech goalie Jakub Kovar had yet another excellent season and was once again one of the top netminders in the League.

After head coach Anvar Gatiyatulin moved to SKA St. Petersburg as an assistant to Ilya Vorobyov, Traktor didn’t find its groove. German Titov, called to replace Gatiyatulin, failed in his task and, due to disappointing results, was fired in October. Things improved under the new head coach, Alexei Tertyshny, who played for several Russian high-profile teams earlier in the Russian Superleague and then in the KHL. With Tertyshny on the bench, results improved, but the team kept on struggling to score, and as a result, Traktor closed the season with only 102 goals scored, just one more than Slovan. A solid defense and good goaltending translated into a playoff qualification, but at the moment, Avtomobilist looks like a mountain too steep to climb. 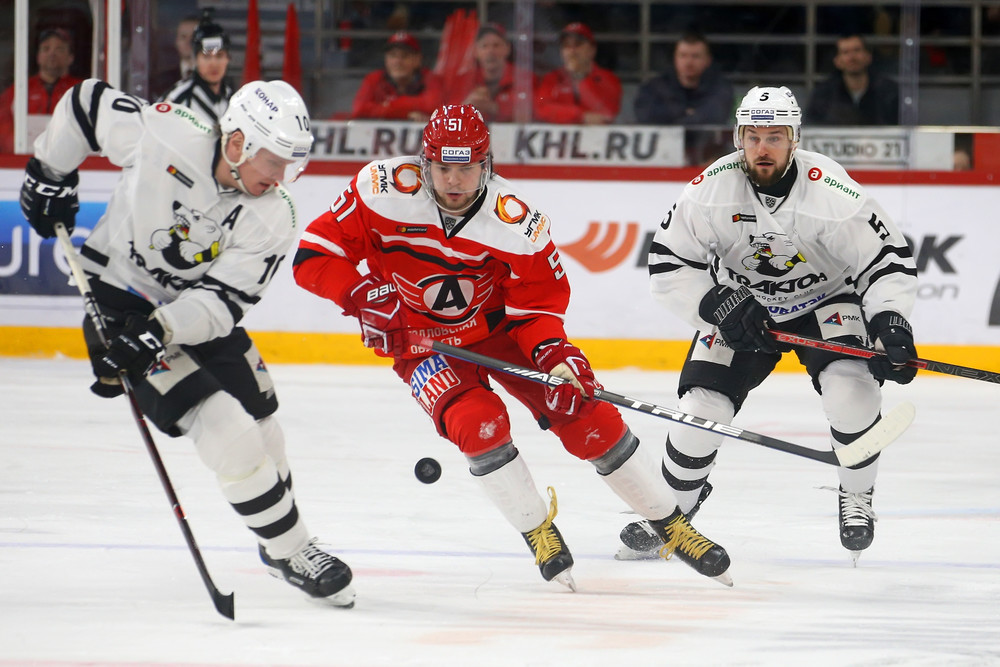 After last year’s first-round exit, Torpedo moved to the Eastern Conference, and this season translated into another playoff qualification for Nizhny Novgorod. Barys, instead, missed the qualification to the postseason in 2017-18, after getting to the Eastern Conference semifinals the year before. After rebuilding in the last year’s campaign, the Kazakhstani club found new leaders in Andre Petersson and Patrice Cormier, while Darren Dietz and Roman Starchenko kept the high level they already showed before. Brandon Bochenski’s return was triumphant, and Barys was consistently one of the best teams in the Eastern Conference.

Torpedo changed not only its Conference in the latest offseason. A new coach came to town – David Nemirovsky – and new faces stole the scene as Philip Holm was called to the 2019 All-Star Week in Tatarstan. Another player who had a breakout season was defenseman Denis Barantsev, who scored 21 (5+16) points and was also called to the Kazan festivities, but had to renounce due to injury. However, keeping up with Barys will be close to impossible for the Nizhny Novgorod team, that also has to deal with Stanislav Galimov’s season-ending injury. 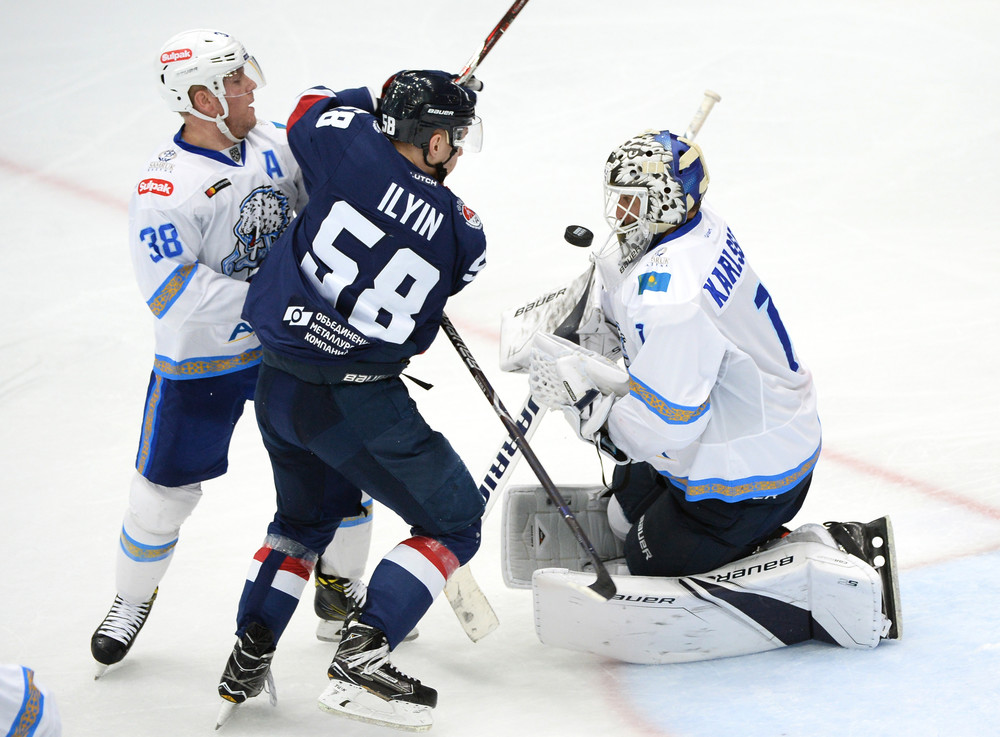 Salavat Yulaev got to the playoffs only as the sixth seed, but can anyone write them off? When a team’s lineup features the likes of Linus Omark, Philip Larsen, Joonas Kemppainen, and Anton Burdasov, you know that the opposition is going to have a hard time on defense. And can forwards consistently score on Finn goalie Juha Metsola? On the other side of the Ural Mountains, however, things are quite good as well. Newcomer Nikolai Kulemin quickly became a leader for Metallurg after recovering from his arm injury earlier in the season. Sergei Mozyakin scored more than 50 points yet another time, and Matt Ellison ended the regular season in excellent shape.

It looks like Metallurg’s GM Gennady Velichkin once again got it right with the summer acquisition and managed to strengthen the team signing a good mix of old acquaintances and new faces. Salavat Yulaev’s season has been more of a roller coaster, yet their status and their lineup mean that the encounter with Metallurg has the potential to translate into a long series for the delight of both team’s – as well as neutral – fans. 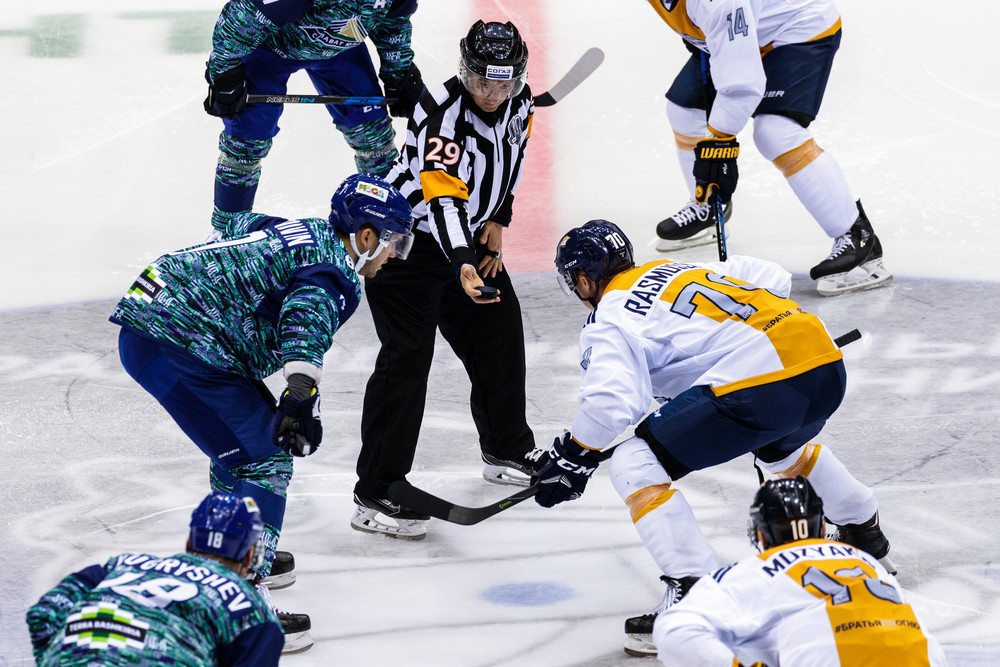 It’s a bit strange to see Ak Bars relatively low in the standings, but the reigning Gagarin Cup champions had a couple of bad moments throughout the season, and as a result, they ended up as the fifth seed of the Eastern Conference. The encounter between Omsk and Kazan looks very exciting, and it’s great to have such pairs – or the meeting between Salavat Yulaev and Metallurg – already in the first round. This series has much potential of getting to the seventh game also due to the differences in style between the two teams.

Avangard changed a lot since last season – not only talking about game venues. With the arrival of Bob Hartley, the team plays more directly, and the regular season was very good for the Hawks, who will undoubtedly want to improve last year’s result when they suffered from a dramatic first-round exit against Salavat Yulaev. Ak Bars, instead, didn’t change much. Bench boss Zinetula Bilyaletdinov maintained his style and the team had a couple of successful signing in Andrei Pedan and Paul Postma. One of last year’s heroes – goalie Emil Garipov – has just suffered from a season-ending injury and will not be able to help the team in the playoff. Most likely, 23-years-old Vladislav Podyapolsky will start as Ak Bars’ number one goalie.

The Eastern Conference playoff will kick off on Monday with the games between Metallurg and Salavat, and Avangard and Ak Bars. 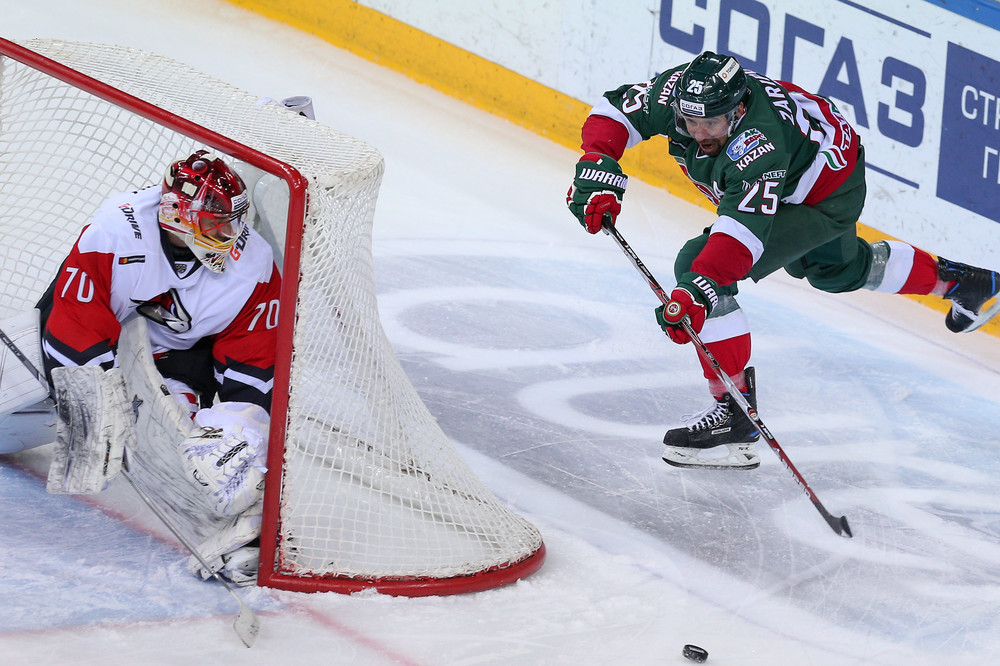