Day two of the All-Star action in Kazan was even more compelling than Saturday’s Skill Show. Pulsating hockey action in front of another capacity crowd brought 36 goals in 80 minutes of game time, plus a shoot-out to snap a 7-7 tie.

Team Chernyshev continued its grip on All-Star glory when it won gold in this year’s mini-tournament. A 4-3 win in the final saw Bob Hartley and his team follow up yesterday’s Skill Show success with another victory. Never before had a team taken the honors in both events; these players from Siberia and the Far East enjoyed a unique, absolute triumph. 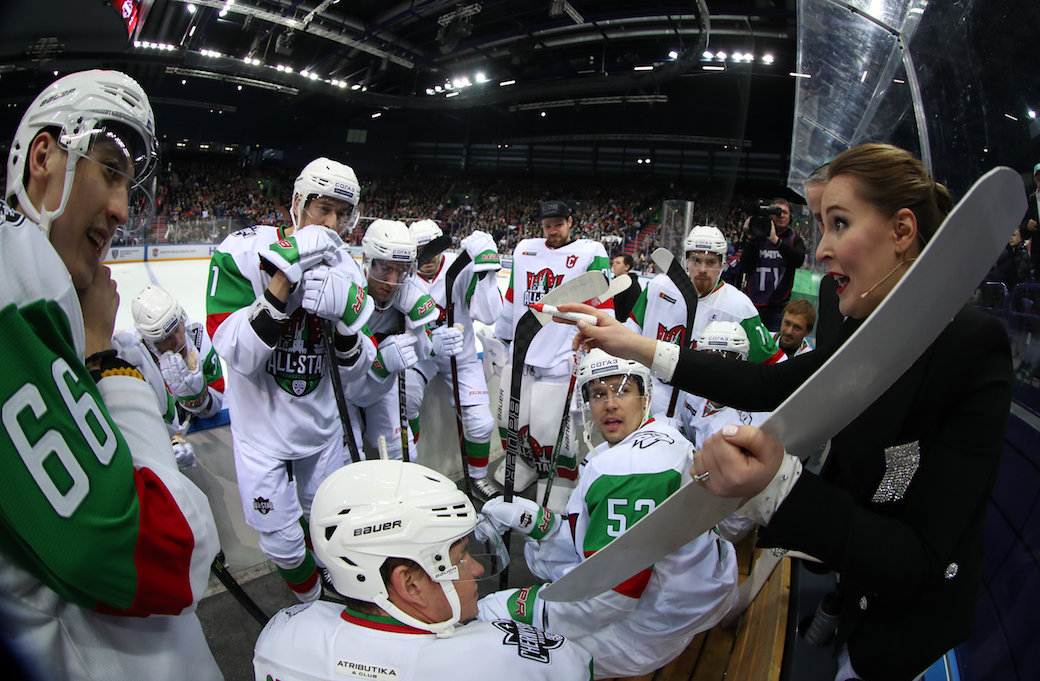 The final was also a big moment for youngster Mark Verba, called up to the show after impressing in the Youth Hockey League’s Challenge Cup a week ago. He had two assists in 16 seconds as his team quickly wiped out Dmitry Kagarlitsky’s early goal for Team Bobrov. Anton Burdasov of Salavat Yulaev tied the scores before Barys D-man Darren Dietz put Chernyshev ahead. Dietz potted another in the first period and a goal from Amur’s Jan Kolar early in the second 10-minute session gave the team a commanding 4-1 lead built largely on production from the blue line.

But Team Bobrov hit back. Vadim Shipachyov reduced the deficit, his Dynamo strike partner Kagarlitsky potted his second of the game; another youngster, Kirill Marchenko, went one better than Verba with an assist on all three of his team’s goals. But it wasn’t to be. The fightback fell short and Team Chernyshev celebrated All-Star gold in Kazan. It’s the second time in three years that Chernyshev came out on top in this format; last season the team took silver behind Team Tarasov.

The first semi-final saw Chernyshev beat Team Kharlamov 5-3. Verba scored one of the goals here in a game that was settled late on. Roman Starchenko snapped a 3-3 tie in the 17th minute and Burdasov’s empty net goal sealed the outcome.

In the other semi-final, Team Bobrov flew into a 4-0 lead – than hung on anxiously as Team Tarasov battled back to 3-4. Nikita Gusev got the opener after just 19 seconds and when Marchenko scored on 7:40 it gave his team a four-goal cushion. Shipachyov and Alexander Barabanov also found the net. 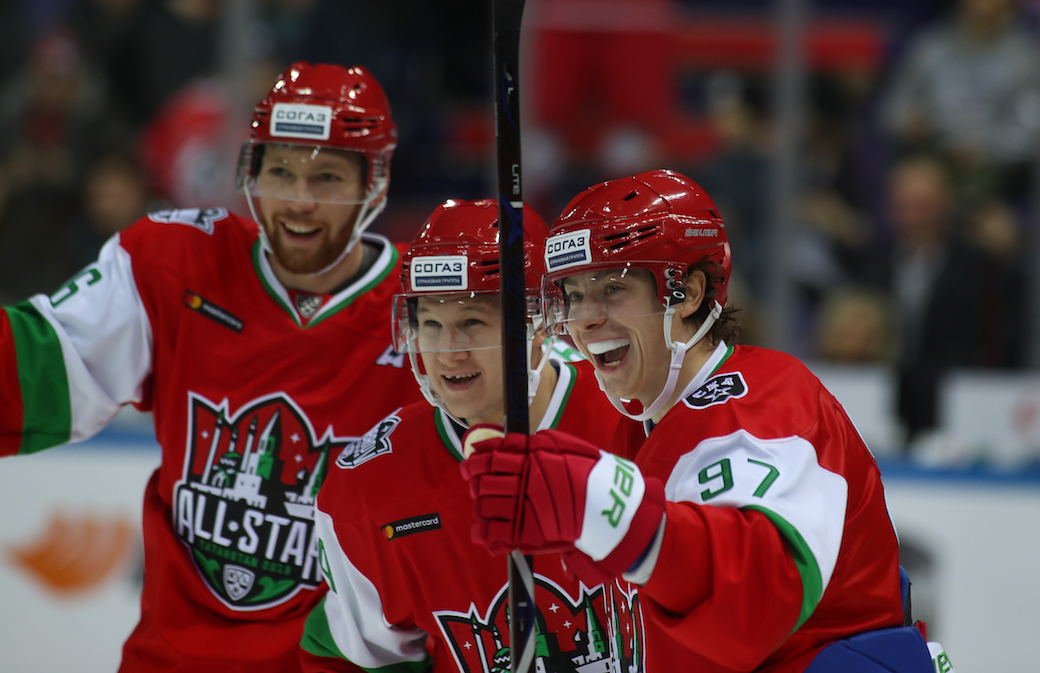 However, Michal Repik got one back late in the first period and two goals in 23 seconds from Khristian Khenkel (Dinamo Minsk) and another youngster, Anton Vasilyev, made for a tight finish. Julius Hudacek held out in the Bobrov net and his team ended up with the bragging rights in the Western Conference.

Bronze for Bilyaletdinov – despite a penalty shot miss

Team Kharlamov, coached by local hero Zinetula Bilyaletdinov and well-stocked with players from Kazan’s Ak Bars, finished with bronze medals. The ‘home’ team lost out to Eastern Conference rival Team Chernyshev in the semi-final but rallied to snatch third place with a shoot-out victory over Team Tarasov. That shoot-out followed a 7-7 tie, proof that the four-team All-Star format can still bring high-scoring games. Sergei Mozyakin scored two, taking his total for this year’s tournament to four and stretching his all-time lead on the All-Star scoring charts. There was also a double for Avtomobilist’s Nigel Dawes; Kirill Kaprizov also scored twice in Bobrov’s losing effort, including a tying goal with seven seconds left. That was the third goal to be scored in the last minute of a breathless battle.

Earlier, Team Kharlamov head coach Zinetula Bilyaletdinov took to the ice for a penalty shot after Team Chernyshev was pulled up for too many men during the semi-final match-up. A bench penalty, of course, demands someone from the bench to take the shot. Dressed in a collar and tie, the 1984 Olympic champion took on Juha Metsola but was unable to find away past the Finn. Afterwards, the one-time defenseman admitted he couldn’t remember when he’d last attempted a penalty shot but added that he was delighted with the All-Star Game in his adopted home city of Kazan. “I think this festival was a big hit in Kazan, everything worked out well,” he said. “I’m sure the fans really enjoyed what they saw. Events like this will live long in everyone’s memory.”

The All-Star Game mini-tournament involved four games of two 10-minute periods played in a four-on-four format. In the event of a tie, the teams went straight to a shoot-out, initially of three shots. As Skill Show winner, Team Chernyshev had the right to choose its semi-final opponent. The winners of the semi-finals advanced to the gold-medal game, the losers played off for bronze. 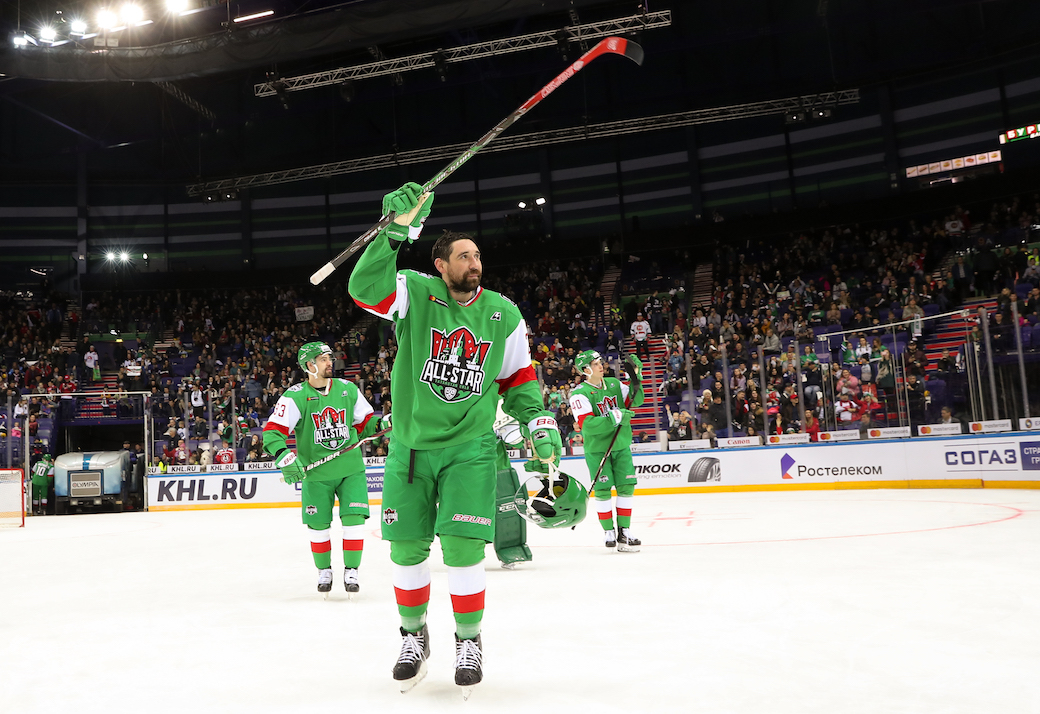