This summer, Alexander Romanov for the first time made the CSKA training camp roster and managed to win Igor Nikitin’s trust. The young defenseman already played 16 games with the Red Army and did not miss a single match so far.

My coach asked me to play on defense, and I thought: “Why not?”

Alexander Romanov spent his childhood in Odintsovo, a city and administrative center in the Moscow Region. By the way, he never changed his home address, even if he gets there much more rarely. And for a good reason, as now his schedule is packed with practices, camps, and games. The CSKA defenseman, son of former player and nowadays players’ agent Stanislav Romanov, learned to skate when he was only four. Soon, his father would get him playing for the Krylya Sovetov. As Alexander remembers, it was a mere geographical matter, as their rink was close to home.

“I started skating very early,” Romanov recalls. “As I have been told later, I skated for the first time on a pond when I was around four. It was more or less the same time when I started attending my father and my grandpa’s games. It can be said that I started getting the hockey atmosphere since I was very young. I am involved with hockey since forever.”

“I started playing with Krylya Sovetov for no particular reasons; I didn’t have an aim to play in a more prestigious school. Simply, the rink was close to home, and it took little time to get there. Then, I was living in Odintsovo, and I needed only half an hour to get to school. I always had to ask for time off from lessons to have enough time to get to the practices.”

“In spite of the tight schedule, the young Alexander did not have problems at school. “I always had good teachers, they always understood my needs,” Romanov says. “They allowed me to develop in everything, so they always let me go to the practices. Of course, I spent a lot of time with tutors at home, but I never had problems.”

As odd as it can sound today, Romanov started as a forward, moving back to defense only aged 12. “I was always bigger than most of my teammates. When I was 12, I was thick, and I did not have much success as a forward. My coach asked me to play on defense, and I thought: ‘Why not?’ The next year already I started playing for the Moscow Selects as a defenseman. I think that the change in position had a positive impact on me. I started playing another way, and my game has significantly improved.”

“Alexander was playing with the 1999 group, while I was coaching the 2000-born kids. After a while, he was sent back. Since the first day, he was above his peers because of his courage and hard work. He was a true leader with a never-give-up attitude. At first, he was playing forward. But he was massive and lacked a bit some offensive smarts. He always had a big shot and an excellent reading of the game. Thus, I offered him to play on defense. He was a bit upset about it, but he agreed. In his first game after the position change he scored one or two goals, so he calmed down and started working on his defensive play.

I know that now Alexander plays for CSKA and that the Montreal Canadiens drafted him. He has a good average time on ice. I am not following him more closely because I have my kids to think about. Everything is in his hands. The NHL draft is just a good start, he needs to further develop and work. Romanov has all the tools to do it, and I think that he will succeed.” 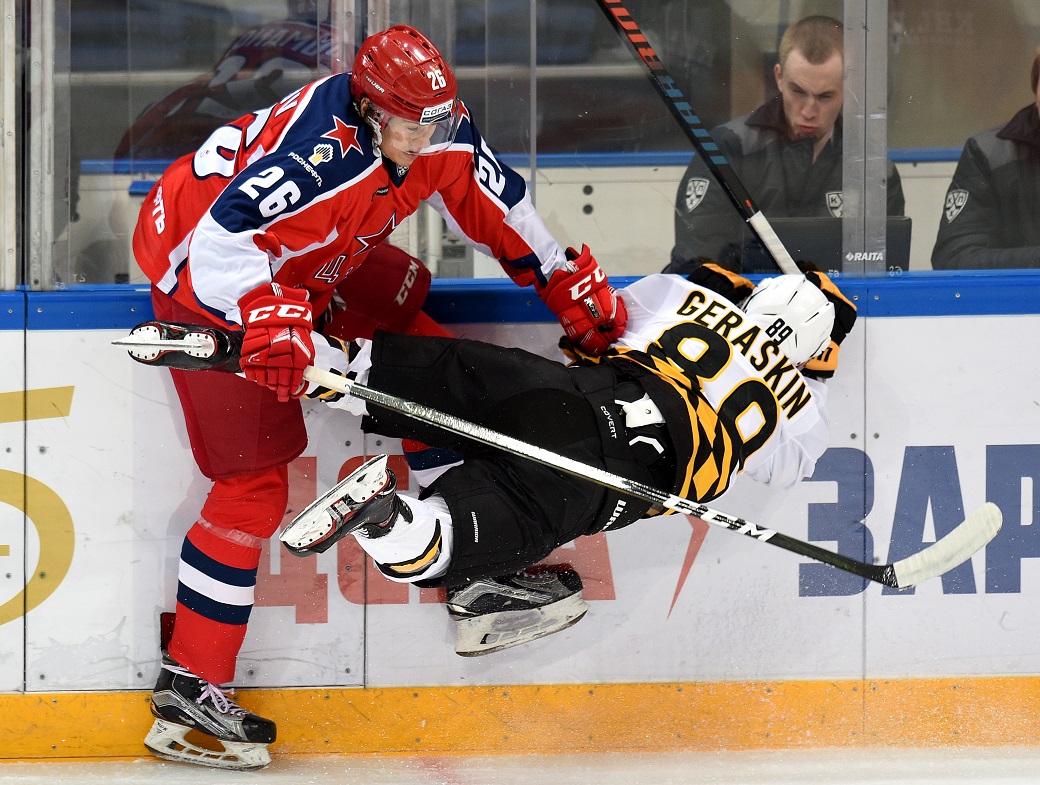 “My grandfather follows me and often analyzes my games”

As we already said, Romanov comes from a real hockey dynasty. He always has something to analyze the games with and to try and find mistakes. How can it be different, when your father won the Russian Superleague title in 2000 with Dynamo Moscow, and your grandfather is Ak Bars’ head coach Zinetula Bilyaletdinov, three-time Gagarin Cup winner?

“My grandfather always had a huge impact on me, both on and off the ice. I think that it didn’t matter much for him if I was playing on defense or as a forward. However, I think that he is happy that he can teach me how to play in his same role, as he was a defenseman. My grandpa and I talk pretty much after any single game. He watches most of my games on tape. He actively follows me, and we often analyze my games,” Romanov said about Bilyaletdinov.

Romanov is at his first season with the Red Army, but he already earned a reputation as a solid, defensive-minded defenseman. By game style, he resembles Florida Panthers blue liner Bogdan Kiselevich, but Alexander readily denies any possible talk about trying to copy his style. “It’s simply a coincidence, I never tried to copy other players. Of course, you can always watch older players and try to get something useful.”

In the 2017 offseason, Romanov moved from the Krylya Sovetov to the CSKA system. “I have never changed team before,” Romanov says after being asked about his move. “I always played for the Krylya. It was like my second home, and in CSKA I had to adapt to a new team. Of course, I already played against most of the guys. We always had heated games against CSKA! I managed to get within the locker room quite fast. The guys who were my opponents turned out being outstanding guys who helped me in adapting to the new environment.”

After a season in the JHL, this summer Romanov was called to the CSKA training camp. It wasn’t easy to adapt to the new challenge. According to his words, there was a massive difference in the practices and the attitude. Everything is done at a much higher speed, and the intensity is entirely different. However, he was there with his peer Nikita Rtishchev, and the new teammates helped him in adapting fast.

“It has been quite surprising at first,” Romanov recalls. “An 18-year-old defenseman with the senior team… It was a huge surprise. I try to give my best in all games and practices. For young players, there is no forgiveness. There are lots of competitors for a spot in the lineup; one mistake and that’s it, you can go back to the JHL.” 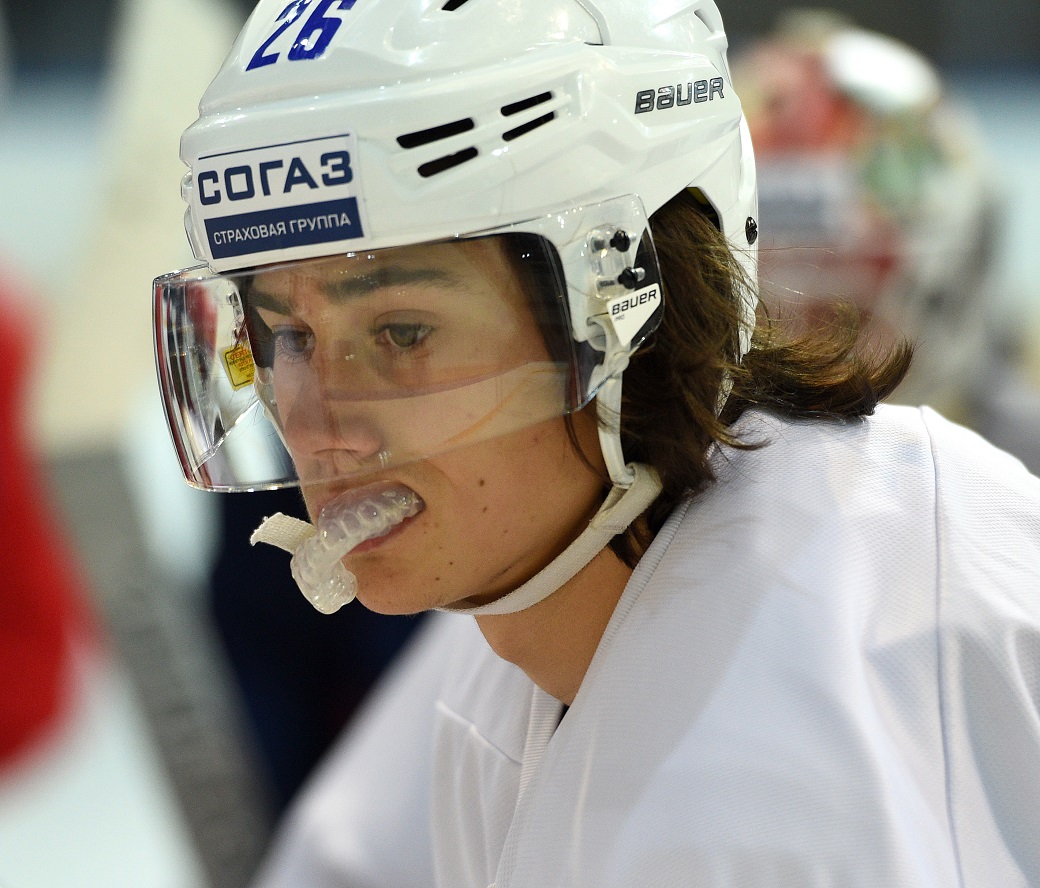 Romanov has posted so far an impressive plus-8 rating, but he claims to be “not surprised. I simply give the hundred percent every time. You play as good as you practice. If you work hard, the game will be on your side.”

In April, Romanov was called to the national team to represent Russia at the U18 WJC at home soil. It was his first big international tournament, and his feelings were unforgettable. But Alexander also wanted to share his impressions about the quarterfinals defeat against Team USA.

“During the U18 WJC, I only had the most positive emotions,” Romanov says. “The whole Chelyabinsk was cheering for us; the arena was always packed with fans. I really liked everything, the organization, the teams, the games; I really liked the experience a lot.”

“Regarding the game against the USA… in one of the key moments, when the opponent scored us an empty-net goal, Ruslan Iskhakov broke his stick. The Americans had so many great players, many of them were drafted in the NHL this summer. Two excellent teams faced each other, but in some moments, they were better, and we couldn’t oppose them. We had many chances, but the pick didn’t want to get in. You know, in hockey you need to prepare well for the game, but you also need a bit of luck.” 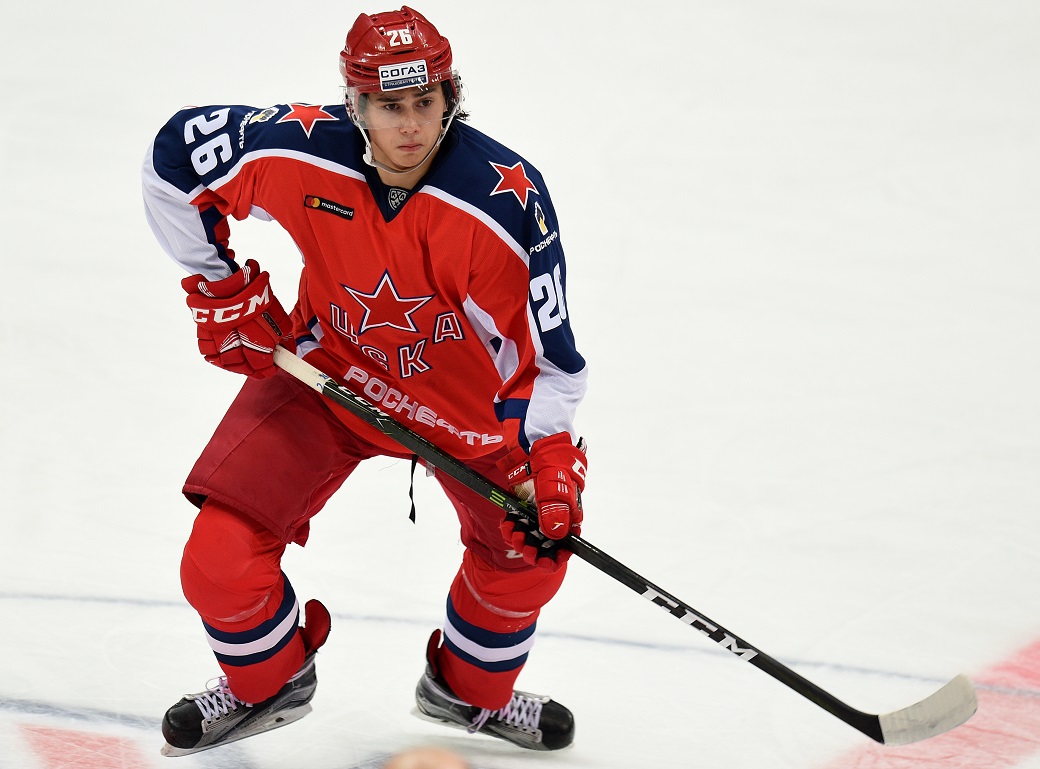 Last summer, a huge event happened in Romanov’s career as he was drafted in the NHL by the Montreal Canadiens with the 38th overall pick. But for now, the young defenseman isn’t thinking much about it as he is focused on helping the CSKA to win the Gagarin Cup. Moreover, he doesn't forget about school as he is now attending the Moscow State University of Management, specializing in Sports Management. Alexander doesn’t allow himself to miss any lesson without a valid reason and for now, is having good results.

“I almost have no free time,” Romanov says when asked about his spare time activities. “I try to spend some time at home, with my family. I try not to go anywhere as I need to rest during the pauses in the games calendar. Sometimes I just need to go to bed and rest, without even getting out. Very rarely I go somewhere with my friends.”

Romanov is young in his eighteen, but he shows maturity and has a clear view on his season and career. “For this year, my goal is to help CSKA to win the Gagarin Cup and be a useful member of the team. I would like to be a combat unit like Nikita Nesterov, Alexei Marchenko, and the other guys. I am not going to guess about my future career. I don’t want to talk about my dreams. I want to win everything at once, but this should happen slowly, step-by-step.”