Avtomobilist secured top spot at the Nizhny Novgorod Governor’s Cup with its fourth victory in the tournament, while Barys made a winning start at the President of Kazakhstan’s Cup thanks to an overtime goal from a new signing.

Avtomobilist picked up its first prize of the summer thanks to a late power play goal from Anatoly Golyshev. The forward struck with eight minutes left to see off Dinamo Riga and give his team an unassailable lead with one game still to play.

Once again, the newly-forged Sexton-Dawes combination caused problems: Dan Sexton scored the opener off a Nigel Dawes assist and had a hand in the second goal of the night, scored by defenseman Mikhail Mamkin. Dinamo, meanwhile, battled hard and twice tied the scores through Nerius Alisauskas and Kevin Clark but could not find an answer to Golyshev’s goal.

“We just went out to win every game and didn’t look ahead of ourselves,” Golyshev said. “We tried to do what the coaches asked, some things worked out and some things didn’t. It’s hard to say which was our toughest game. Every time we had some little tactical changes, we tried something new. We’ve still got another training cycle ahead of us, I don’t think we’re at our best yet.” 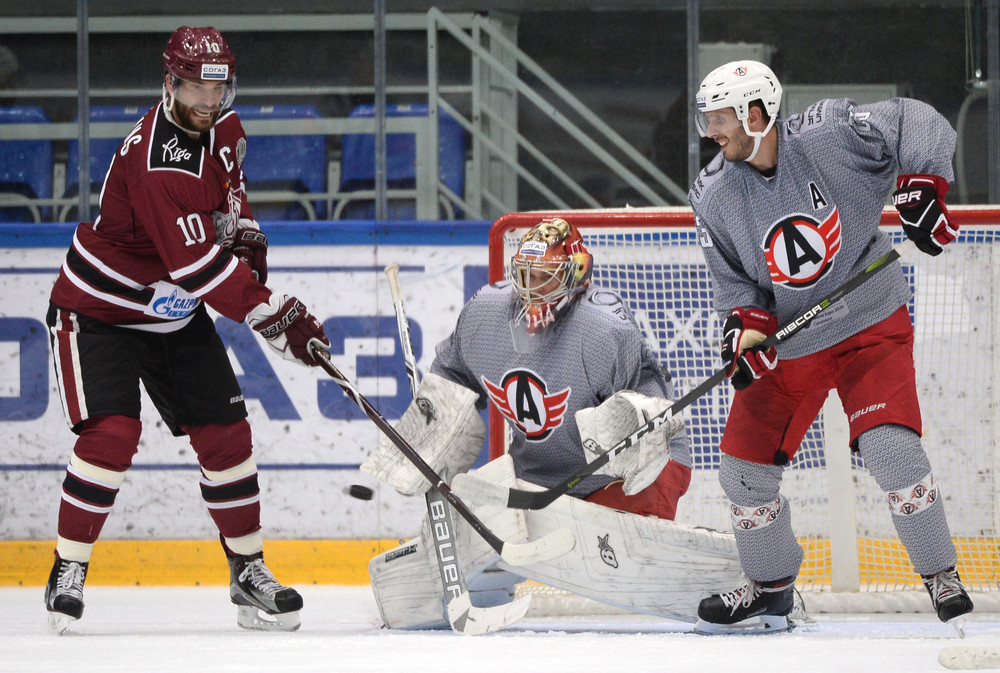 The Muscovites reaped the benefits of a good start in this game, going into a 3-0 lead before defeating their Belarusian namesakes.

Veteran D-man Ilya Nikulin opened the scoring early in the second period and then had an assist as Ivan Igumov doubled the lead seven minutes later. Another power play saw Maxim Afinogenov get his first point on his return to Dynamo, providing the assist for Andrei Pribylsky to make it 3-0.

Minsk replied with a power play goal of its own through Beau Bennett, giving the team hope of another fightback. But Dustin Boyd added a fourth for Dynamo late on and Andrei Kostitsyn’s last-minute effort was too little to save the game for the Belarusians.

After a training camp in Finland, there was a distinct Finnish accent to Neftekhimik’s success in Astana. After the first half of the game was goalless, Juuso Puustinen opened the scoring in the 33rd minute off a pass from Joonas Natinen. Natinen was involved again a couple of minutes later, getting his second assist of the night as Adam Polasek scored a power play goal to double the KHL team’s lead.

The Kazakhs finally got their offense going in the final period and pulled a goal back through Artyom Likhotnikov. However, it took barely a minute for another Finn, Mikael Ruohomaa, to restore that two-goal cushion and Alexei Mikhnov completed the scoring late on.

Mikhnov, an experienced player making his Neftekhimik debut after a summer move from Avtomobilist, was content with his first appearance in his new colors. “We won, and I managed to score, so I’m happy with that,” he said. “To start with it was hard to get going because I hadn’t played for five months but gradually I found my rhythm and by the third period it was much easier.”

Barys included three new players in the roster for this one, with Curtis Valk, Patrice Cormier and Andre Petersson all making their debuts for the club. There were also four players promoted from the juniors, but no room for Brandon Bochenski who cannot play in an official game before September 1.

Amur gave a start to new goalie Libor Kasik and he was beaten in the 27th minute when Nikita Mikhailis got his stick to the puck as it pinballed around the Khabarovsk zone. Petersson picked up an assist on the play. Barys held that slender lead until the closing seconds, when Ivan Glazkov tied the game and took us to overtime. There, Valk grabbed the winning goal for Andrei Skabelka’s team.

“It was disappointing that we conceded such a late goal and couldn’t hold on to win in regulation,” Valk said after the game. “But overall we did OK for our first pre-season game. It felt great playing on a line with Mikhailis and Petersson, we created lots of chances and it was fun playing with those guys. Now I need to get used to European-sized ice and I’m sure I’ll get more and more confidence from that.”