A famous name is back in business as Tretyak backstops Dinamo Riga to victory with two penalty shot saves. Elsewhere, Red Star fires blanks again in Sochi and Avtomobilist impresses without its star names.

Loko head coach Dmitry Kvartalnov put his faith in his team’s youngsters for this game – and reaped the rewards with a game-winning goal from Georgy Ivanov and a shut-out from Ilya Konovalov.

Those two players made the difference in a hard-fought battle, with Andrei Loktionov’s empty net goal securing the Railwaymen’s second victory of the Sochi tournament.

“It was an even game,” Kvartalnov said. “I was a little disappointed that we didn’t have more shots on the power play, but the guys did well to battle to the end and see out the win.

“Konovalov made his debut for us today and had a shut-out, but tomorrow [Alexander] Salak will return as we planned.”

For the second game running, Red Star failed to score. Head coach Jussi Tapola admitted that there was still work to do on offense, but talked up the prospects of his team’s Chinese contingent.

“It was a good, hard-fought game against one of the most combative teams in the league,” said the Finn. “It was a good test for us. There were times when we came close to tying the game, but we just fell short again.

“Our Chinese players are working hard, learning and playing. These guys have great potential but they need to get used to our systems. After that, it’s all about their individual qualities.” 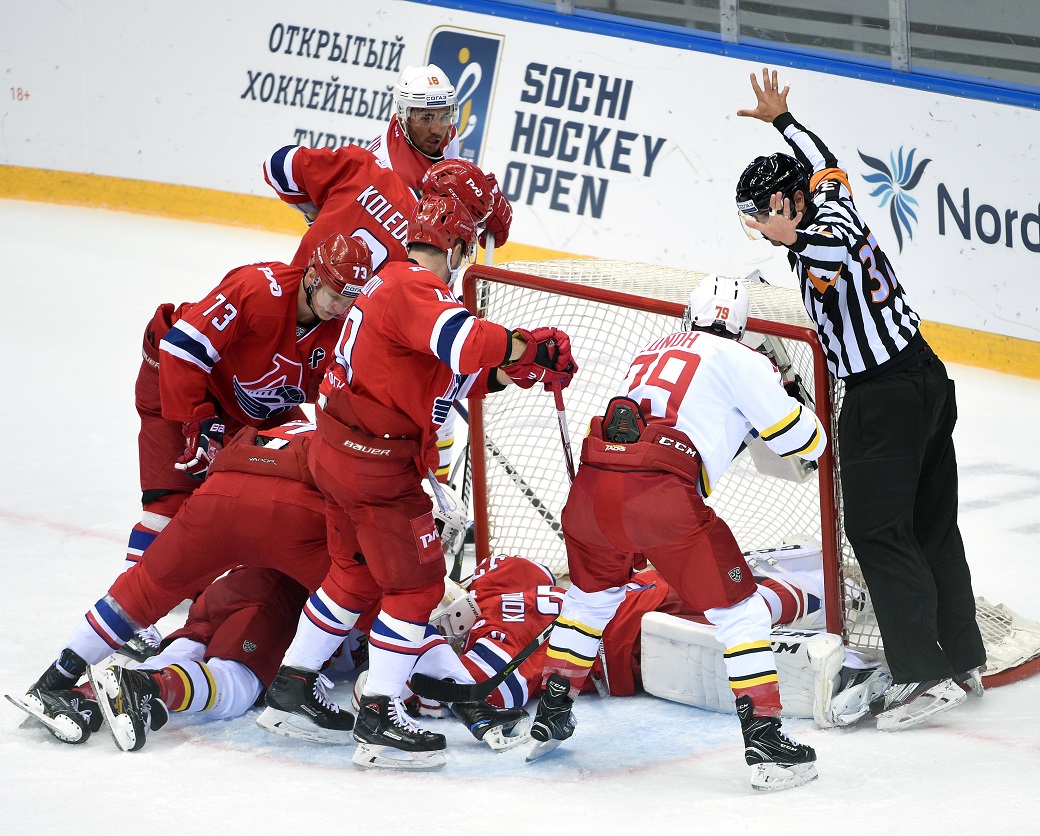 A strong second period saw Russia claim its second victory here and left the host club without a win in three games.

Sochi, defeated by Kunlun Red Star and SKA, made a bright start as Nikita Shchitov’s early power play goal and Stanislav Bocharov’s 10th-minute tally opened a 2-0 lead. But Denis Zernov scored on either side of the intermission to bring Russia level, and late in the second frame Ziyat Paigin and Andrei Chibisov put the national team 4-2 in front.

The host hit back early in the third when Alexander Polunin potted his first for his new club but there was no way back for the tournament host.

Both teams rested big-name players, but Avto proved to have greater strength in depth as the Ural team recorded its second victory of the tournament.

Without the likes of Nigel Dawes, Dan Sexton and Stephane Da Costa, Avtomobilist left it late to claim victory, though. The Yekaterinburg team got in front midway through the first period: Dynamo youngster Vladislav Kazamanov took a major penalty and Alexander Kucheryavenko converted on the power play.

Andrei Alexeyev brought Dynamo level late in the opening frame, and the Blue-and-Whites wasted a chance to get in front midway through the third period when the team had a 5-on-3 advantage. That was punished in the closing minutes. Vyacheslav Litovchenko put Avto back ahead with three minutes left and Ilya Krikunov’s empty-net goal put the issue beyond doubt. 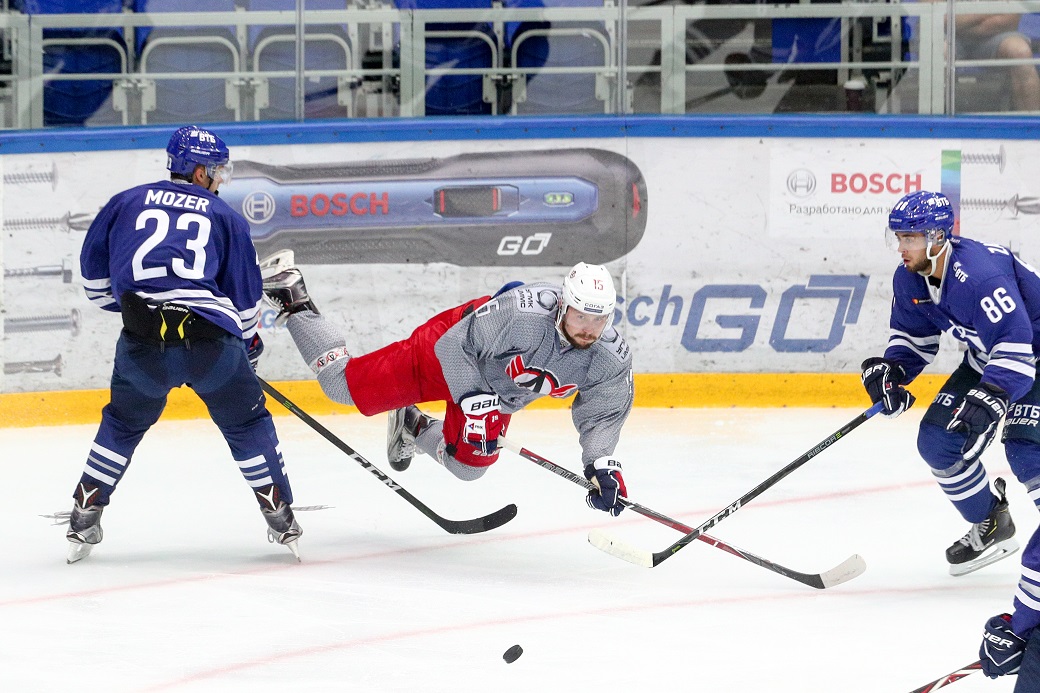 Whenever great goalies are under discussion, the name of Tretyak is never far from the conversation. Today, we saw a chip off the old block as Maxim Tretyak – grandson of the legendary Vladislav – saved two penalty shots in the first period of this game.

The Dinamo Riga man denied Quinton Howden and Andrei Stepanov. The 22-year-old is in Riga on a try-out and could hardly have produced a better advert for his qualities.

Tretiak helped the Latvians to victory in their second game of the competition. After a 1-4 loss against Dynamo Moscow, Riga needed just 74 seconds to open the scoring through Linus Videll. Minsk tied it up thanks to Maxim Parfeyevets but Matthew Maione restored the Latvian lead before Tretyak’s two big saves.

Subsequently Denis Osipov managed to bring Minsk level, but Uvis Balinskis and Kevin Clark scored late in the second period to make it 4-2. That was how it finished. 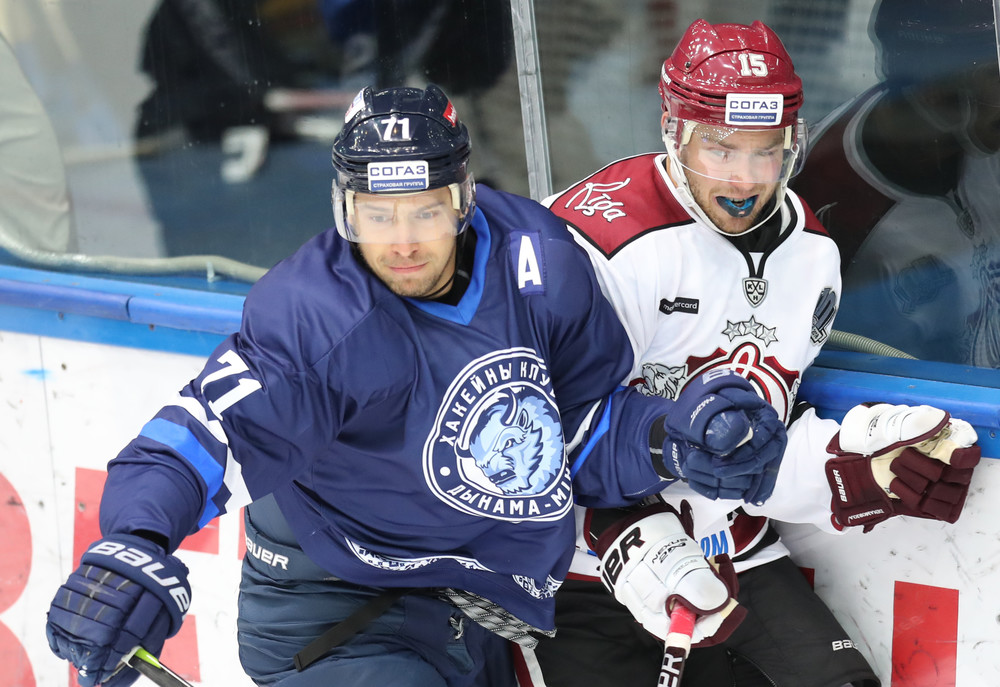