Can Jokerit keep winning streak alive at the Far East?

A Moscow dual is on tap as CSKA welcomes Dynamo Moscow?

At the League teams’ directors meeting on May 23, 2018, the new ranking parameters were presented, and the teams were again ranked by the various indicators. KHL.ru explains what factors influenced on the teams’ positions improvement or worsening at the end of the jubilee season.

The parameters are counted on for a period of three seasons, the latest seasons and the previous two. The first evaluation of the teams’ activity, presented on May 24, 2017, included data from the 2014/2015, 2015/2016, and 2016/2017 seasons. The new rankings were formed using data from the 2015/2016, 2016/2017, and 2017/2018 seasons. Changing each of the parameters affects the location of the club in the general ranking, but a significant improvement or worsening occurred if the same indicators in the 7th and 10th seasons were significantly different from each other.

A good on-ice result in the 10th season could improve the general ranking of a team if in the 7th season, not counting this time, the team had a worse position. For example, Severstal Cherepovets got to the playoffs in 2017/2018 for the first time in several seasons and was the 16th overall team. But in the 2014/2015 season, the team had the 18th position in the standings. That’s why Severstal couldn’t count on a significant improvement in this indicator. 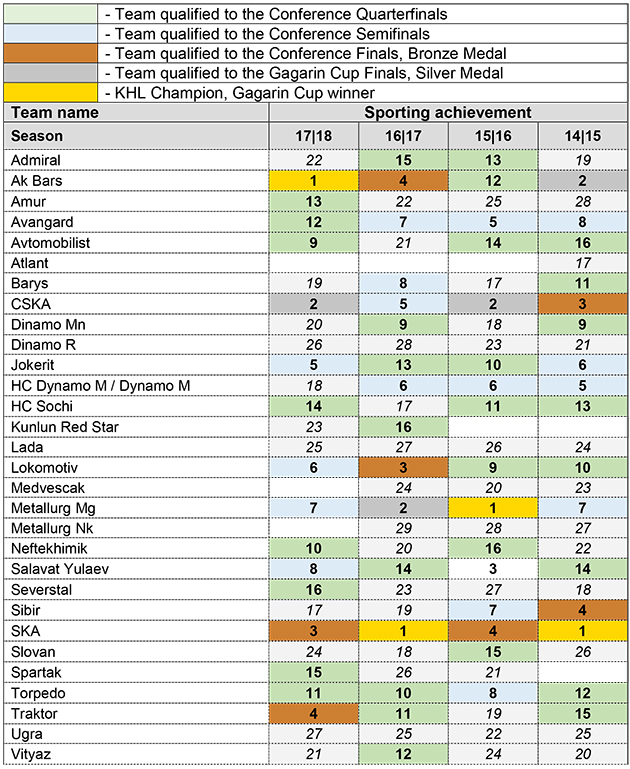 The biggest jump forward was made by Amur Khabarovsk, Neftekhimik Nizhnekamsk, Traktor Chelyabinsk, and Avtomobilist Yekaterinburg. All these teams got to the playoffs in the KHL’s tenth season: Amur ended the season in the 13th place (28th last year), Neftekhimik had the 10th spot in the standings (22nd place three years ago), Avtomobilist gained seven positions if compared with the 2014/2015 season, and Traktor won the Bronze Medal, while having a first-round exit in the 7th season. 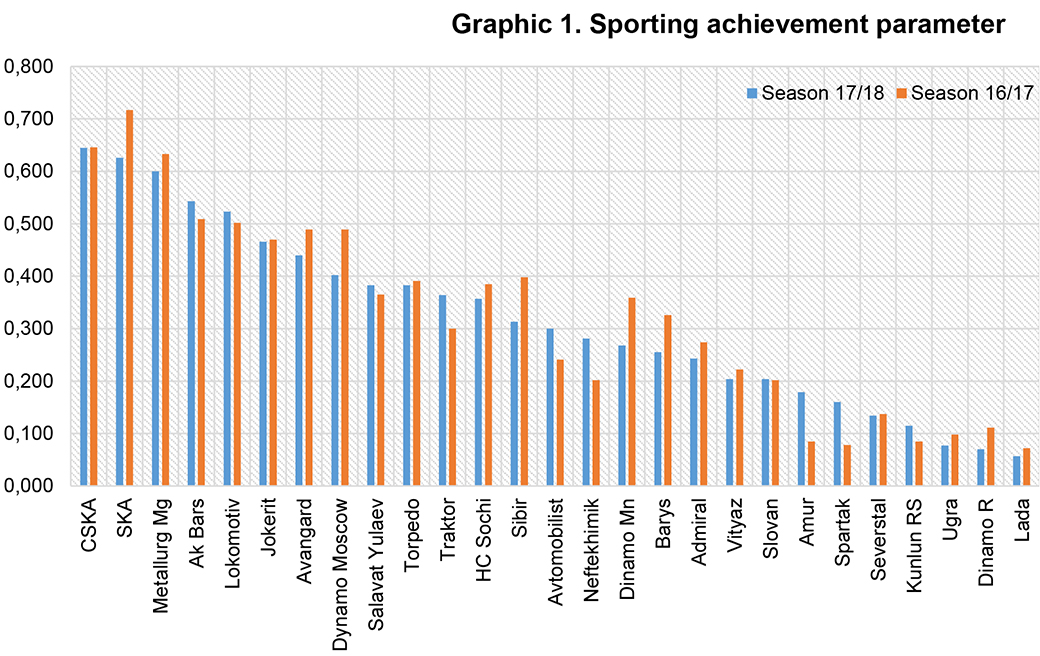 Among the teams with a worsening in this parameter, we can mention Dinamo Minsk, SKA St. Petersburg, HC Dynamo Moscow, Sibir Novosibirsk, and Barys Astana. Only SKA qualified to the Gagarin Cup playoffs this year, but if in the first evaluation the St. Petersburg team had two Gagarin Cup triumphs to be counted, this year only one was included.

To fight for the highest places in the standings and to assemble a good roster of players and coaches, teams need a good budget. The league, comparing the on-ice results and the players budget of the teams, determined the amount necessary to assemble a competitive roster.

In May 2017, to calculate this parameter the league used the data for the 2014/2015, 2015/2016, and 2016/2017 seasons, and the average players budget was around 700 million rubles. In May 2018, the average dropped to 650 million rubles*: teams should spend at least this amount on players’ salaries in order to receive the maximum mark in this parameter. It is important to note that teams won’t get additional points augmenting their spending, but they would lose points if spending less money.

* - the drop in the average labor costs from 700 to 650 million rubles is related to the different number of teams whose financial indicators were counted to calculate the average players budget (in accordance with the given set of conditions). 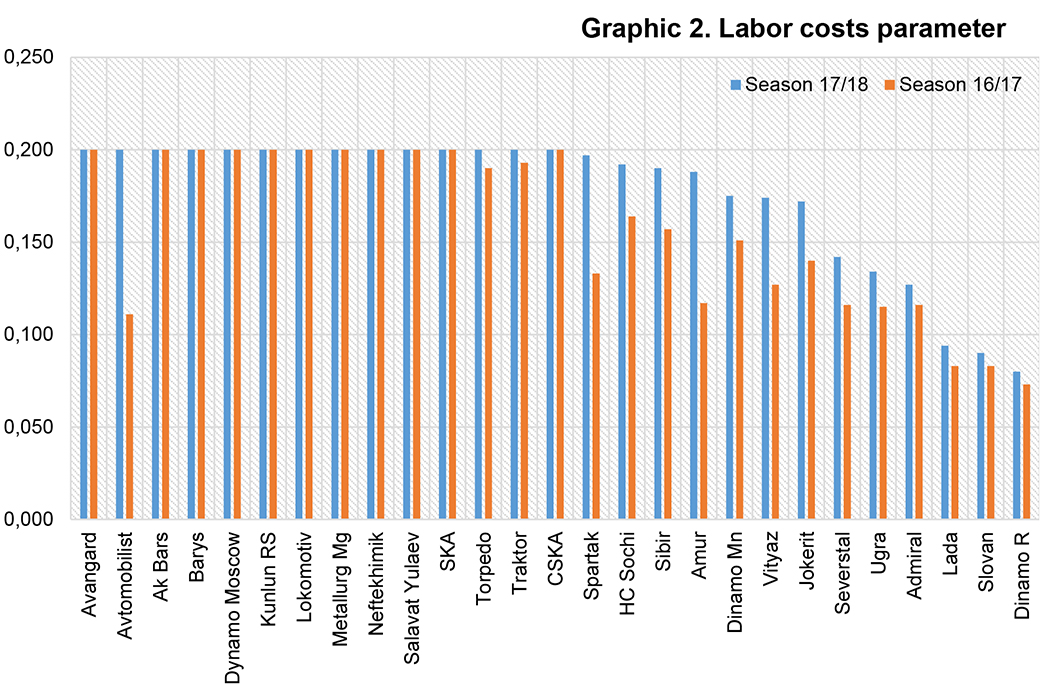 It’s worthful to note that 16 out of 27 clubs had an increase in this parameter. 11 teams got the maximum mark already in the first calculation happened in May 2017, and after this year’s calculation, Avtomobilist, Traktor, and Torpedo joined in.

The calculation of this parameter is influenced by the share of state financing and the funding by companies with state participation in the general budget of the club. Only six teams fully adhere to this condition: Barys, Dinamo Minsk, Jokerit, Kunlun Red Star, Severstal, and Spartak. 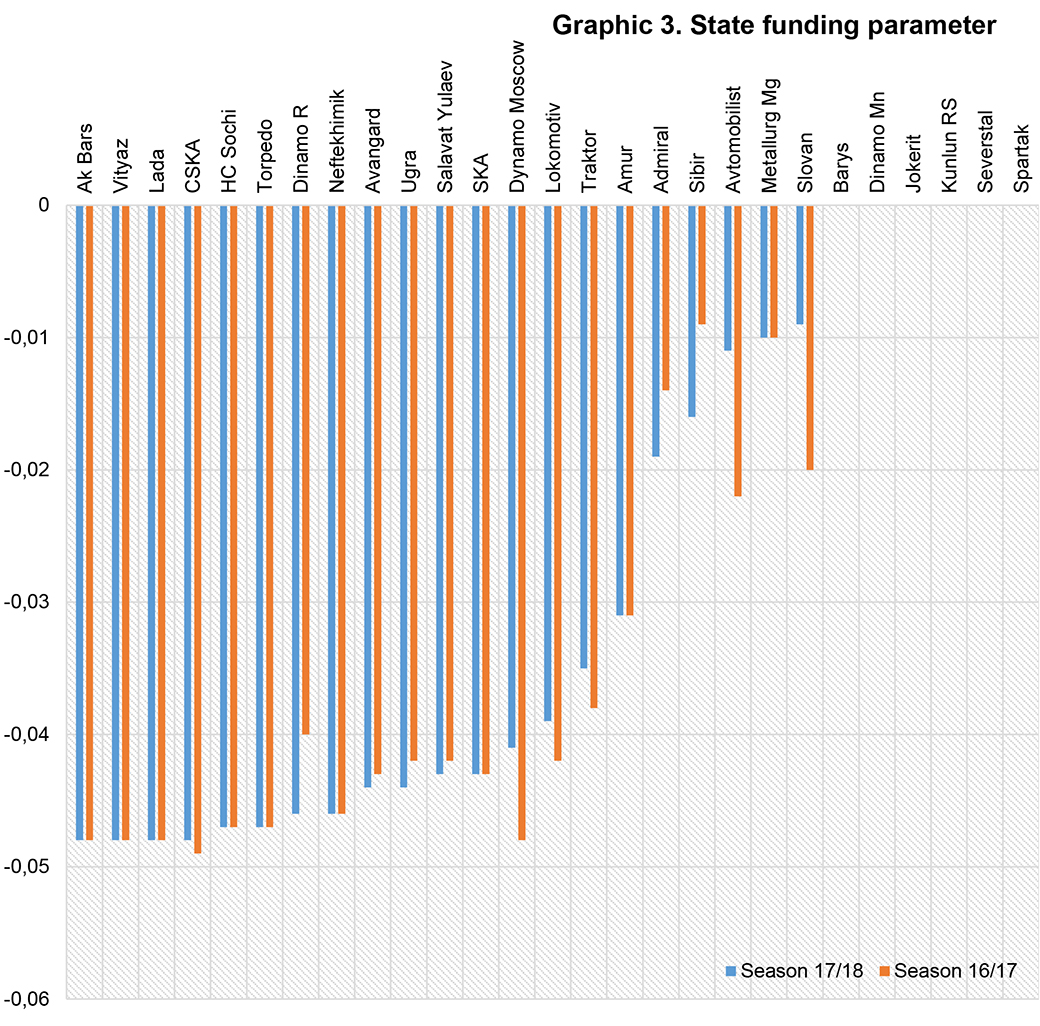 Late payment of wages to players (5%)

In the 10th KHL season, 13 teams had wage delays. Slovan, Torpedo, and Admiral had the biggest problems with this parameter. Admiral had a maximum delay of 257 days. 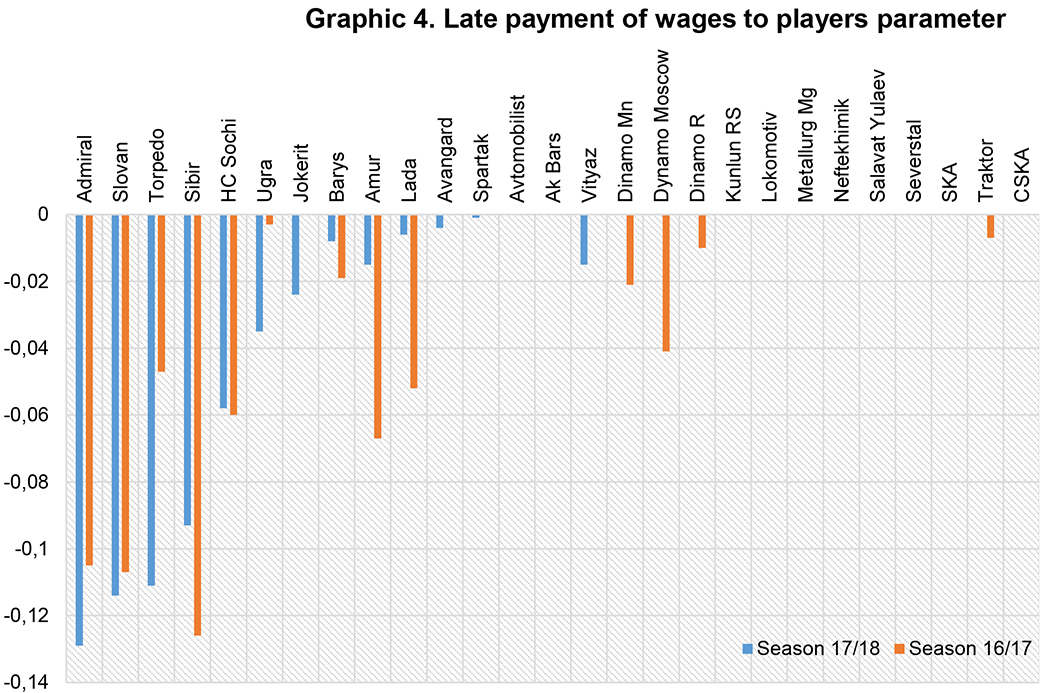 In average, the delays were cut to 149 days. If compared with the 9th season, HC Dynamo Moscow, Dinamo Minsk, Dinamo Riga, and Traktor had no delays.

A capacity of 12,000 spectators is the threshold for the calculation of this parameter. The fewer spectators an arena holds; the less points will be gained in the overall rating. 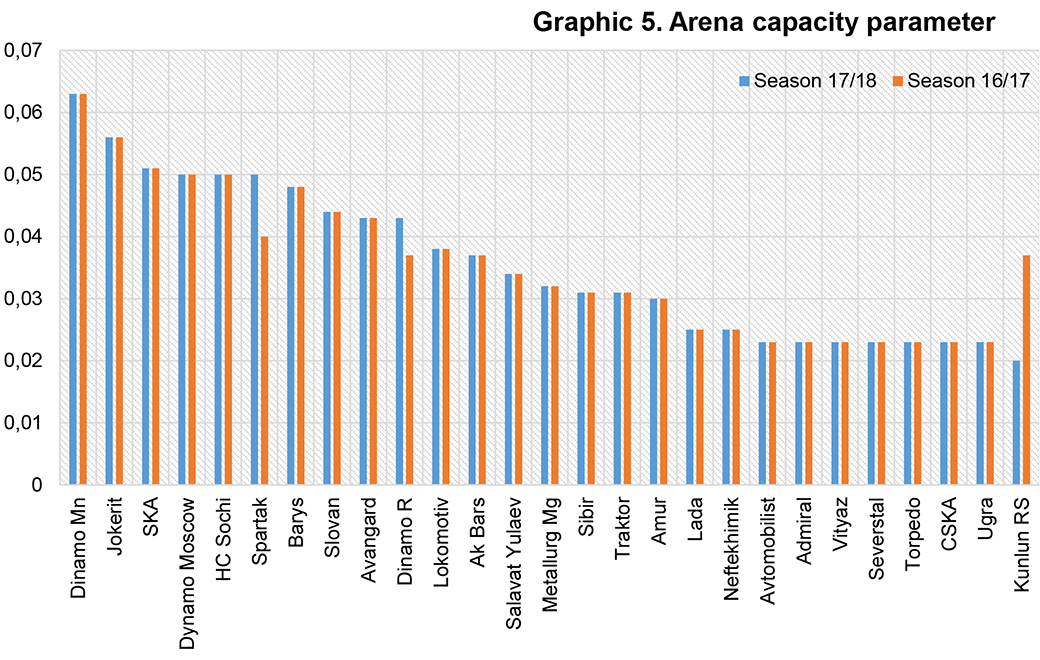 In the 2017/2018 season, three clubs had a different arena capacity. Spartak spent the season at the VTB Ice Palace, with a capacity of 12,100 spectators, while last year the team also played games at the MSA Luzhniki, thus the average capacity was only 9,580 spectators. Dinamo Riga played all their home games without moving to a smaller arena (10,300 in 2017/2018 against 8,905 in the 2016/2017 season). Kunlun Red Star had a worsening here: if last year the team played in both Beijing and Shanghai, the team spent the 2017/2018 season in Shanghai, with an arena capacity of 4,800 spectators.

To calculate this parameter, the average attendance of all the teams from the previous three seasons was used. It’s also noted, that only regular-season games were considered. 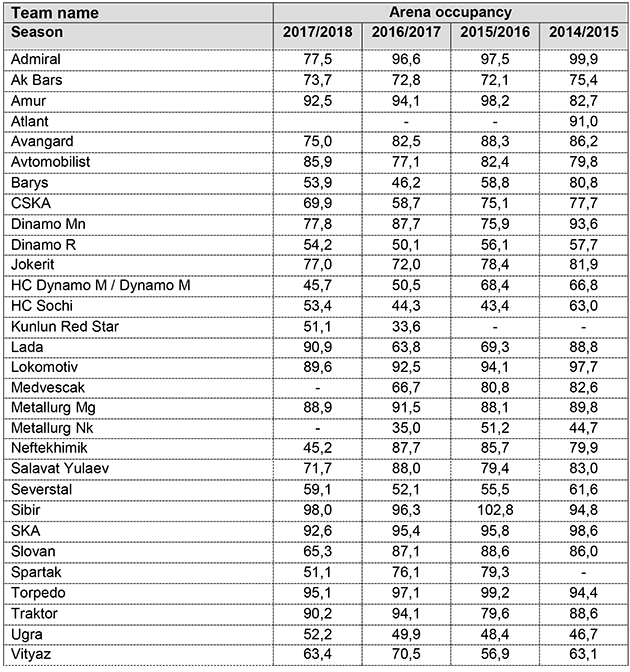 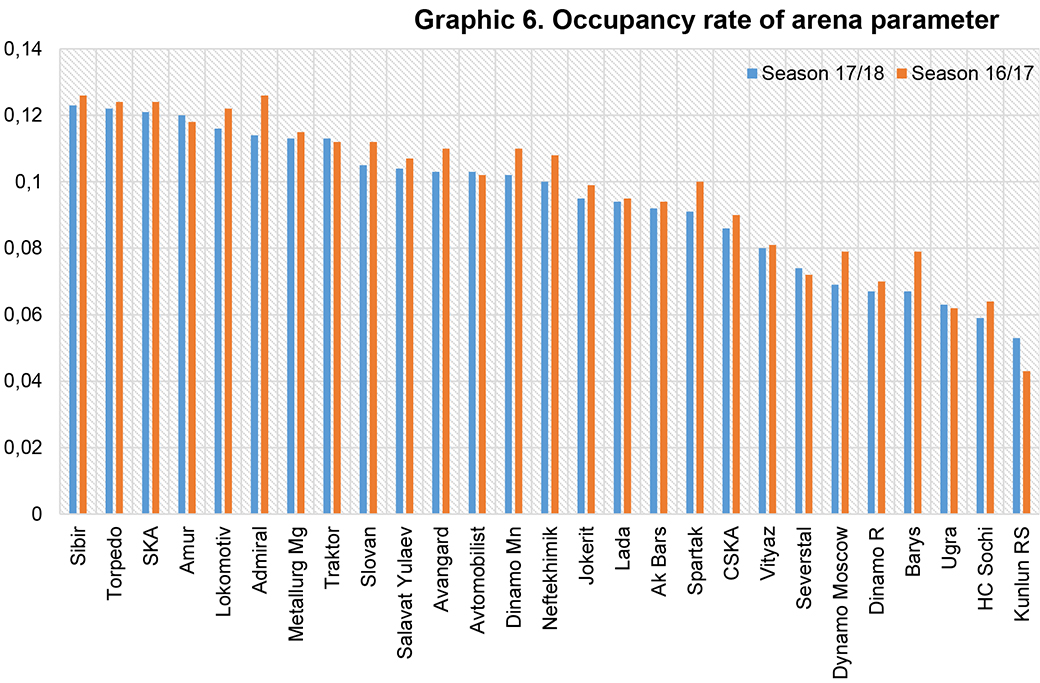 According to 2017/2018 data, four teams had a higher Occupancy rate of arena: Avtomobilist, Jokerit, CSKA, and Severstal. Neftekhimik, Admiral, Barys and HC Dynamo Moscow had a slight decrease.

Only Sporting achievement (30%) and Labor costs (20%) parameters had a bigger influence on the KHL teams ranking. This is not surprising, as the TV demand is directly related to commercial income for both teams and the league. How is the TV demand calculated?

The KHL owns all the TV rights to show the league’s games, and as such creates TV content, films games, and creates TV broadcasts. The league concludes contracts for the sale of the games’ TV rights to Russian and foreign broadcasters. The final value of contracts is determined by the interest in the sport, and, accordingly, it brings to higher prices for advertising during the games. 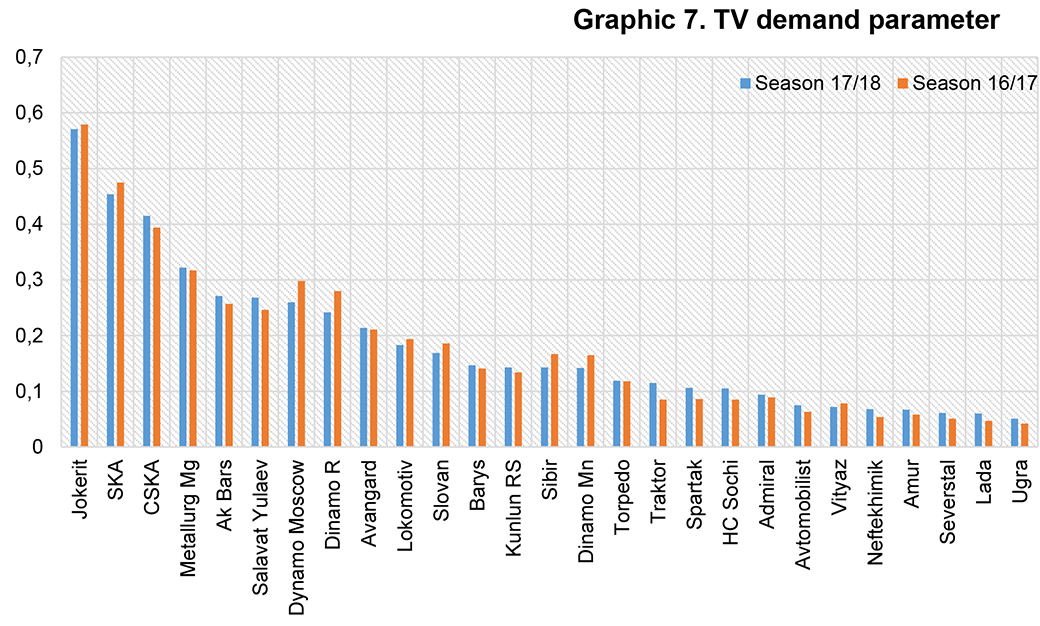 All the income gathered by the league from regional and foreign TV-licensees is summed, to have a base to calculate the conditional share of revenue brought by the specific team. The sum is calculated based on the cost of one game (which can vary in different cities and countries) and the number of matches chosen by each TV company. The profit from a game is divided equally between the home and the away team. Using this formula, it’s possible to calculate the share of each team and its contribution to the overall earnings of the League from the sale of TV rights. Each team’s share is the TV demand.

According to 2017/2018 data, the TV demand has mostly fallen for the teams who had the worst on-ice results, for example, HC Dynamo Moscow and Dinamo Riga. The parameter’s leader is Jokerit, while the best between Russian teams is SKA St. Petersburg. The top-five includes also CSKA, Metallurg, and Ak Bars.

The values for this parameter didn’t change at all. Among the leaders there are Avtomobilist, Dinamo Minsk, SKA St. Petersburg, and four teams from Moscow Region: Vityaz, HC Dynamo, Spartak, and CSKA. To calculate this parameter, not only the population and the number of KHL teams in a city is counted, but also the population of the closest cities. That’s why, for example, Lada got the maximum rating, due to the proximity to Samara, a city with a population of over one million. 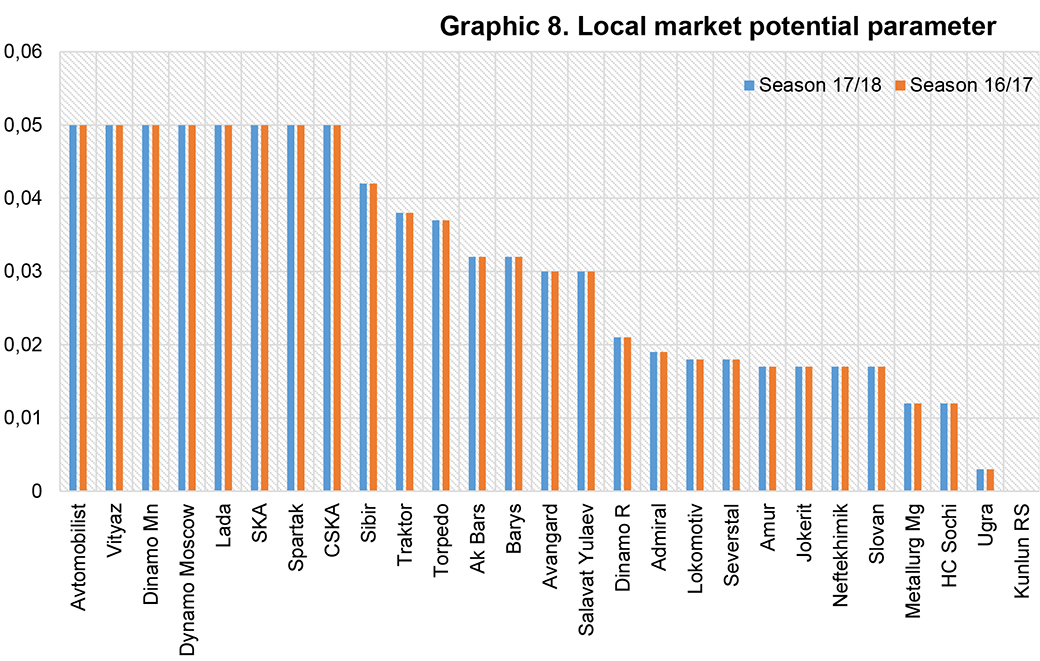 The parameter wasn’t calculated for Kunlun Red Star, as the team is temporarily based in Shanghai, and not in Beijing, who should be the team’s home city.