Review of 2017/2018. Neftekhimik: Nazarov’s wolf pack jumps to the playoffs

KHL.ru keeps on reviewing the KHL tenth season for the different teams. The latest article will review Neftekhimik Nizhnekamsk’s season. Andrei Nazarov’s team managed to get to the playoffs but was defeated in the first round by Traktor Chelyabinsk. Can the season be considered a success for Neftekhimik?

Last summer, the team got a significant facelift. 18 players left the team and as many arrived. Almost the whole foreign players group was substituted, only Dan Sexton, who was last year’s top scorer, remained. Robert Hanzl, Chad Rau, Andrej Nestrasil, and Roman Graborenko were among the newly-signed players. As goalies the team counted on the Andrei Makarov – Ilya Ezhov tandem, and after missing one KHL season, Oleg Piganovich returned to his favorite coach Andrei Nazarov.

Consistency – this is exactly what Neftekhimik lacked last year. The team could start a winning streak of a few games, but then collapse and start a losing streak. After starting the season with a home three-game winning streak, the Nizhnekamsk-based team in the very first away game suffered a big defeat in Ufa against Salavat Yulaev (0:6), while two days later managed to lose in Sochi after being up 3:0 at the 12th minute.

However, later Neftekhimik grabbed points in nine games, winning five, and by September 26 the team was fourth in the overall KHL standings. Often, Neftekhimik could not find a solution to defeat the dark horses. For example, they lost both games against Ugra, two out of three games against Lada, and one out of two against Dinamo Riga. 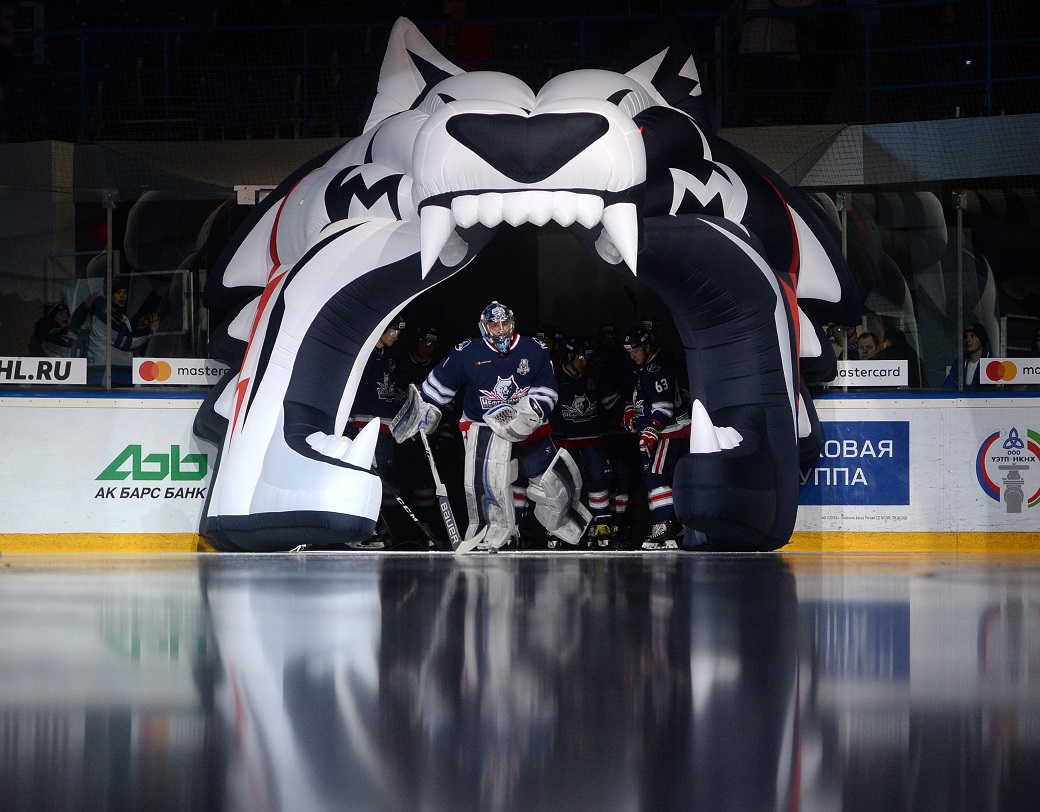 Of course, neither the boards and the coaching staff were happy about this kind of roller-coaster. During the season, Neftekhimik tried to improve the roster. On November 16, the team signed defenseman Erik Gustafsson, while in December Chad Rau was sent to Avangard in exchange for Dennis Everberg. Close to Christmas, Nikita Filatov was acquired from Lada Togliatti.

Midway through December, the team had a surprising winning streak, with three consecutive shutout games, against Sochi (2:0 away), Ak Bars (3:0 at home), and Barys (4:0 away). However, in the next game, Sibir managed to score all the goals that the previous opponent could not, defeating Sibir with a 6:2 score. 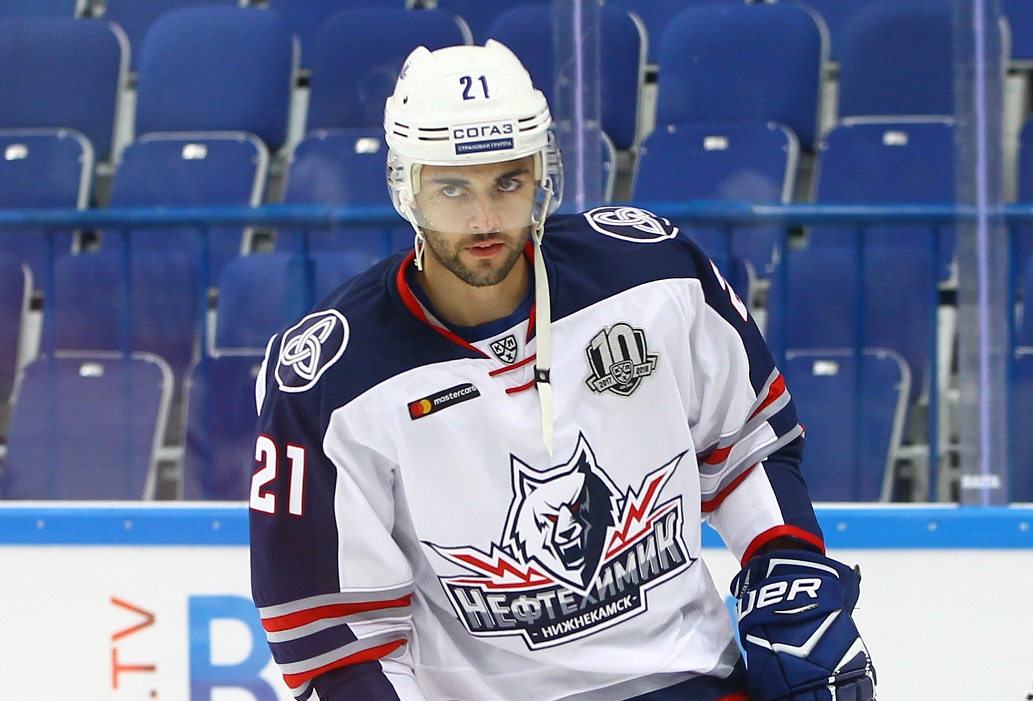 At 2017 end, Neftekhimik was among the leaders of the Eastern Conference. But the start of 2018 wasn’t as good as the team lost four games on a row. “It was our seventh away game, we weren’t at home for one month. But we can’t use this as an excuse. We also had a lot of injuries. What can you do about it? We’re now getting back home to prepare for the next games,” Andrei Nazarov said after a defeat in Nizhny Novgorod. And the preparation was a good one, as the team won four consecutive games, including against CSKA Moscow (1:0). After defeating Vityaz at home on January 19 (3:1), Neftekhimik got a playoffs spot.

After the Olympic Games pause, Neftekhimik surprisingly lost to Lada (0:4), then to Metallurg (2:3), even if in this game they were up 2:0 by the 25th minute. As a result, Neftekhimik, instead of the third place and the home-field advantage, got to the playoffs as the sixth seed and needed to face Traktor Chelyabinsk, one of the surprises of the season. 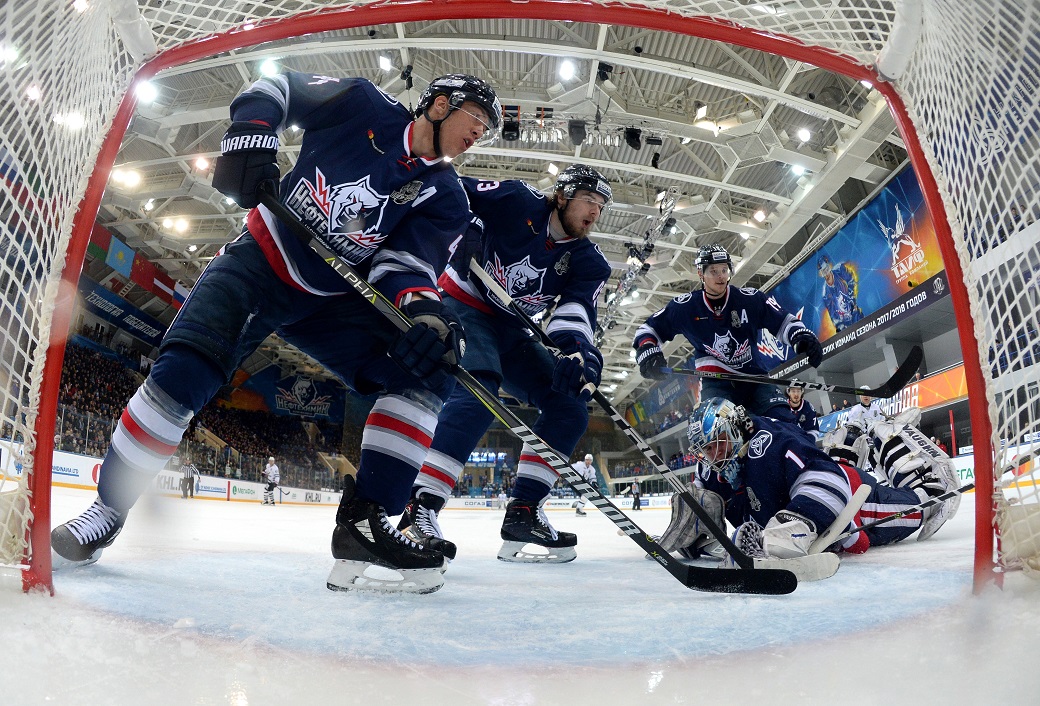 The Neftekhimik-based team lost the first three games of the series, failing to contain the new Chelyabinsk starlet Vitaly Kravtsov, who decided the first and the third game. In the third game, Neftekhimik tried to shake things up the hard way, the teams amassed a total of 249 penalty minutes, but this didn’t have any influence on the final score of the series. The team led by Andrei Nazarov managed to win the fourth game (3:2) and was close to saving the fifth game too. Being down 1:4, they managed to rally, but Traktor kept its cool and won the game, sending Neftekhimik on vacations.

Andrei Nazarov got to Neftekhimik on 2016 late October, replacing Nikolai Solovyov. He managed to quickly change the situation inside the team, who was on the bottom of the standings. Generally speaking, it’s always interesting to follow any team led by Nazarov, who loves being at the center of the attention himself. At only 43 years of age he already coached in almost 500 games and recently was awarded with a commemorative ring by the KHL players’ association. Nazarov has a peculiar style and it looks like he isn’t ready to change it. But most importantly, he works always very hard to create a true team and he almost always manages to do so. 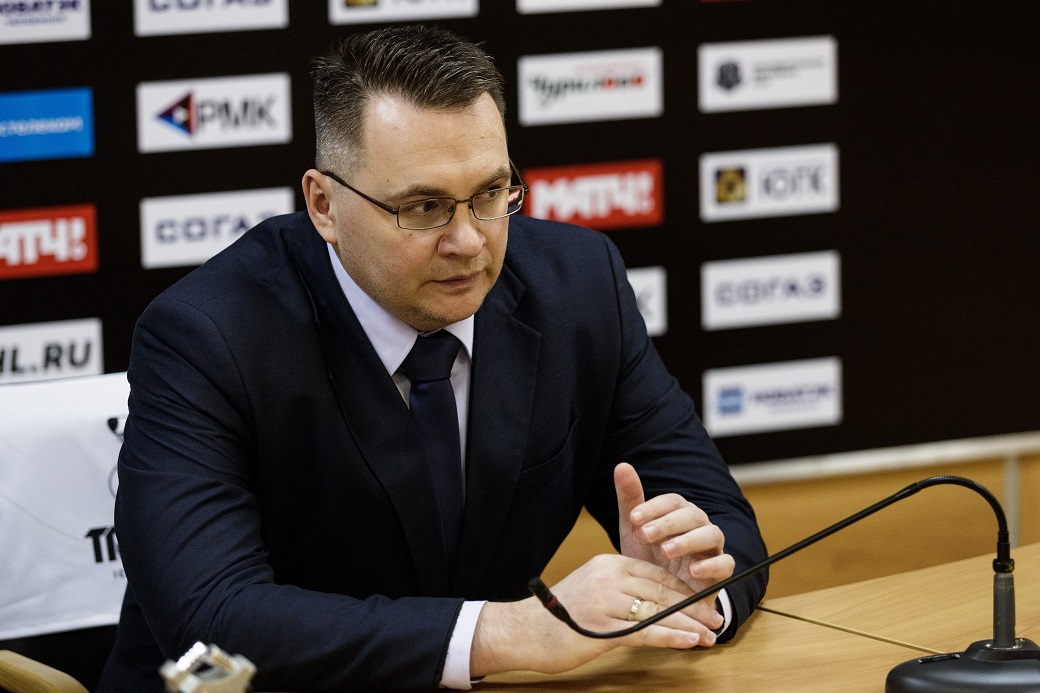 In Neftekhimik, going by the words of Andrei Nazarov from an interview with russia-hockey.ru, a new page in the history of the club was opened. “We hope to create a true wolf pack, an aggressive team with many local players from Nizhnekamsk.” Moreover, the team underwent a rebranding, picking a wolf as the new team’s logo. The fans were enthusiastic about the change.

Nazarov always trusted younger players, and in the 2017/2018 version of Neftekhimik Nizhnekamsk fans saw many local young players who constantly played for the main team. Damir Sharipzyanov, Alexander Bryntsev, Kamil Fazylzyanov, Ildar Shiksatdarov, Pavel Kulikov, Bogdan Yakimov: these are the young, local players who formed the core of the team.

Even if the team lost in the playoffs first round, Neftekhimik made a step forward and on January 16 the boards announced to have renewed their ties with Nazarov until April 30, 2019.

On January 17, Neftekhimik faced CSKA Moscow after a four-game losing streak, while CSKA won eight games on a row. Even the stats were on Nizhekamsk’s side as they last defeated the Red Army on October 14, 2011. However, Neftekhimik managed to break the bad tradition.

The opening goal was scored on the 27th minute, when Nikita Filatov, during a powerplay, sent the puck to Erik Gustafsson, who didn’t miss his shot. The Red Army started attacking head-on and were close to tie the game, but Neftekhimik played a very sound defense, not allowing the opponents to beat Ilya Ezhov. It was the seventh shutout in the season for the goalie.

“I want to thank our fans, we didn’t please them for quite some time. We were lucky tonight. Ilya stopped everything, he played a phenomenal game,” Andrei Nazarov declared after the game.

After the Olympics Game pause, Neftekhimik was scheduled to play a home game on February 27 against a demotivated Lada Togliatti. The team needed a win to get to the playoffs as the third seed in the Eastern Conference. However, instead of a victory parade, the fans saw four unanswered goals scored by the opposition. “We need to understand why we lost this game, we lost the motivation,” Nazarov said after the game.

Probably it looks a bit strange to celebrate a well-known 33-years-old defenseman in such an article, but the way the season unfolded has forced us to make such a choice. Last year Oleg Piganovich, who ten years ago established a new record as top-scoring defenseman, didn’t play as he decided to heal a serious injury. 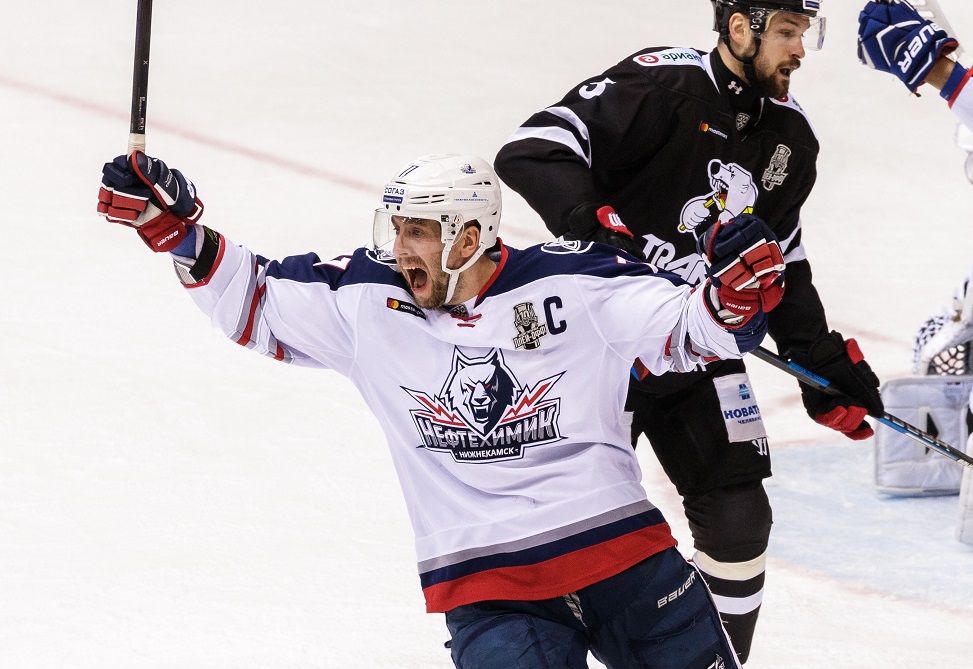 This season showed that healing to the end was the best idea, as Piganovich played his best hockey of his career. The defenseman got back to the coach that helped him the most in establishing as a good hockey player in 2007/2008, in Chelyabinsk. The return has been very effective. Piganovich was named as the team’s captain and showed that he still has a great shot. He scored nine goals during the regular season (three of them being game-winning goals), and two during the playoffs. Piganovich never had better stats in the KHL.

Nikolai Zherdev played only two games for Neftekhimik, then the contract with the forward, who played for eight games in the latest six years, was dissolved. “It was a mutual decision. Nikolai is in a good shape but didn’t have a spot in the team. Such a master should not sit on the bench,” this is how Neftekhimik’s general manager Rail Yakupov commented the decision of releasing Zherdev. 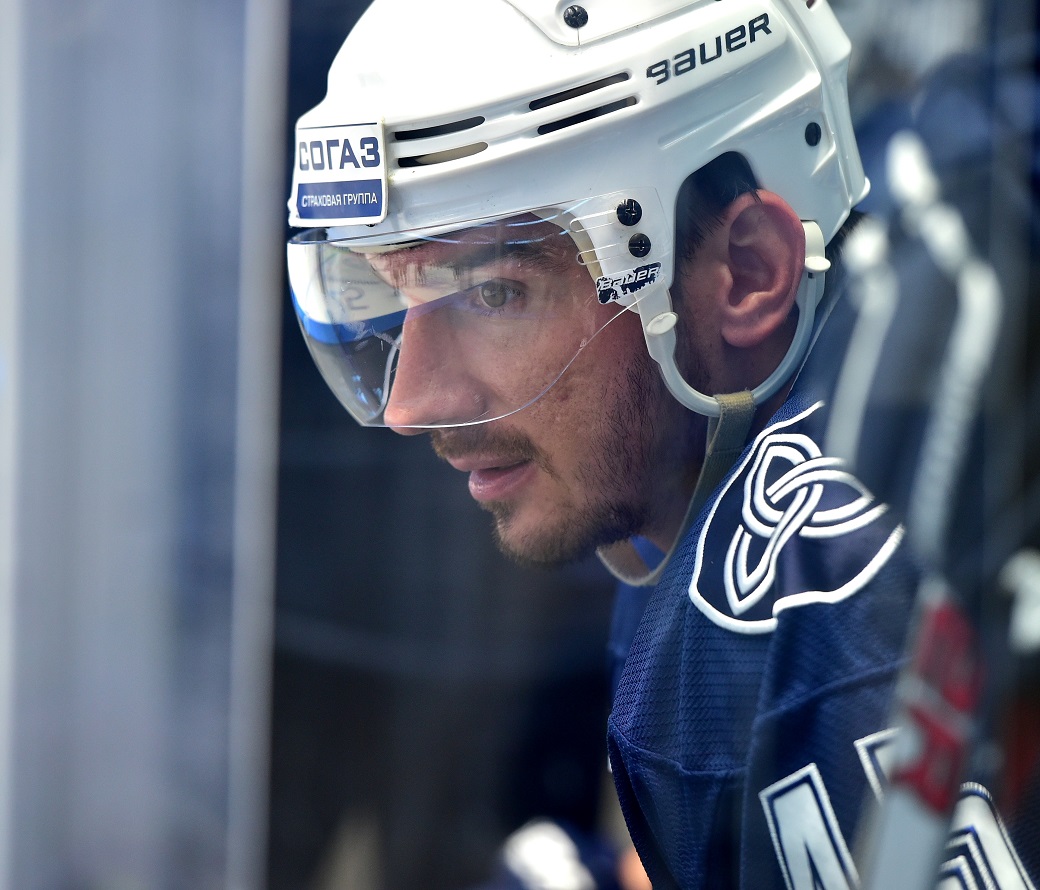 The talented player, known for his discipline problems, didn’t manage to find a spot in Nazarov’s team.

Roman Graborenko was another player who didn’t last long in Nizhnekamsk. On October 17, after playing 17 games for Neftekhimik with two (1+1) points, he was traded to Kunlun.