In the Words of the Winners – Quotes from KHL Closing Ceremony

On Wednesday, the 23rd of May, the concert hall of Moscow’s Barvikha Luxury Village hotel played host to the Closing Ceremony for the tenth-anniversary KHL season, and much has already been written and said by those who attended the event, or reported on it, or broadcast from it, but what was the glittering gala evening like for those viewing it from the stage – the winners themselves?

KHL.ru asked six of those who were receiving or presenting awards to tell us what the occasion was like for those who viewed it from the stage.

Yashin: “We witnessed an amazing season!”

“I liked it all very much! The hall was stunning, everything was superbly organized, and it was a top-class event. I enjoyed watching it. But I wasn't cheering for anyone in particular – I am just a fan of Russian hockey. All the guys who received their awards from the KHL were worthy winners. Good on them!

I think we've witnessed an amazing season. The SKA-CSKA series immediately springs to mind, as that was hockey of an extremely high level. Of course, I have to mention Ak Bars, who showed once again that if you know how to defend, then you know how to win (Smiles). I'd like to congratulate the KHL, the fans, the coaches, the players and everyone else involved in giving us such a great season!”

Tryamkin: “I'll be delighted to see Dawes in Yekaterinburg”

“It was a great pleasure to get this award. The season was a very good one, although the ending could have been better. Now I have something more to strive for next season – to match Philip Larsen's performance.

I really did not expect our childhood coaches to appear on the stage. Well done the KHL for making such a touching moment possible. If it were not for Sergei Pavlovich (Demenshin), who knows where I would be right now. He and his family can take a bow.

The Avtomobilist management has done a good job and assembed a fine team. So far, however, we've looked better on paper than on the ice, so we will work hard to become a team which really gets results. We're not going to pause for breath. We want to be among those who win the team prizes at these ceremonies. I managed to say a few words of greeting to Nigel Dawes, and it's great that we have recruited such a player. Simply super! I'll be delighted to see him in Yekaterinburg.”

Larsen: “It's nice to represent not only yourself, but also your club”

“It's a real pleasure to receive this award. And it's been a fine evening, with so many excellent hockey players in attendance, and a great honor for me to be here. Nikita Tryamkin can try to capture my trophy next year.

It was a long season, but I wanted to come to Moscow for this. It is nice to be a part of such an event and to represent not only myself, but my club, Salavat Yulaev, and also to represent my country of Denmark. And now it's time for a vacation.

Expectations for the new season are always very high when you play for a strong team. Next year we have a great chance of performing even better.” 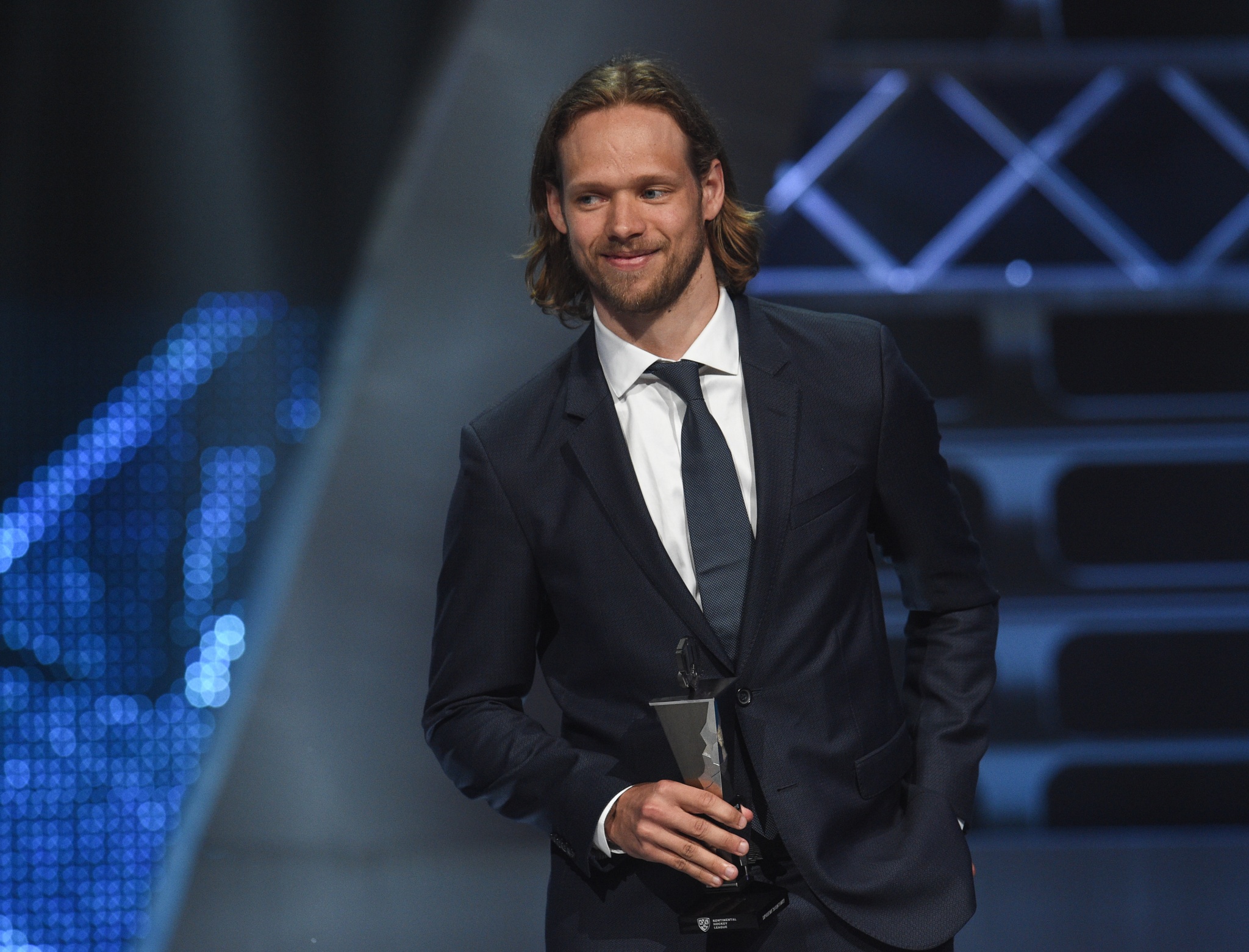 Dawes: “This is my first award from the KHL”

“It is an honor for me to be here, in the 10th anniversary season, and this is my first award so I guess I'll have to keep working hard. I'm looking forward to an interesting year, having chosen a change, something new. Avtomobilist was a good team last season, so expectations are high, but I want to start the new season as soon as possible. I know some of the guys, plus I talked with Nikita Tryamkin today, and I look forward to getting to know the others. Avtomobilist wants to create a top team, and even though I had options with other clubs, the Yekaterinburg guys approached me first and made me a good offer, including in terms of playing time. It will be interesting for me to be part of a team that has ambitions to develop.

As for Barys, they have always been good at recruiting foreign players and striving to bring the best out of the young guys. Would I celebrate a goal against the Astana guys? I always celebrate scoring, no matter who I play against, but it will be strange playing against them.” 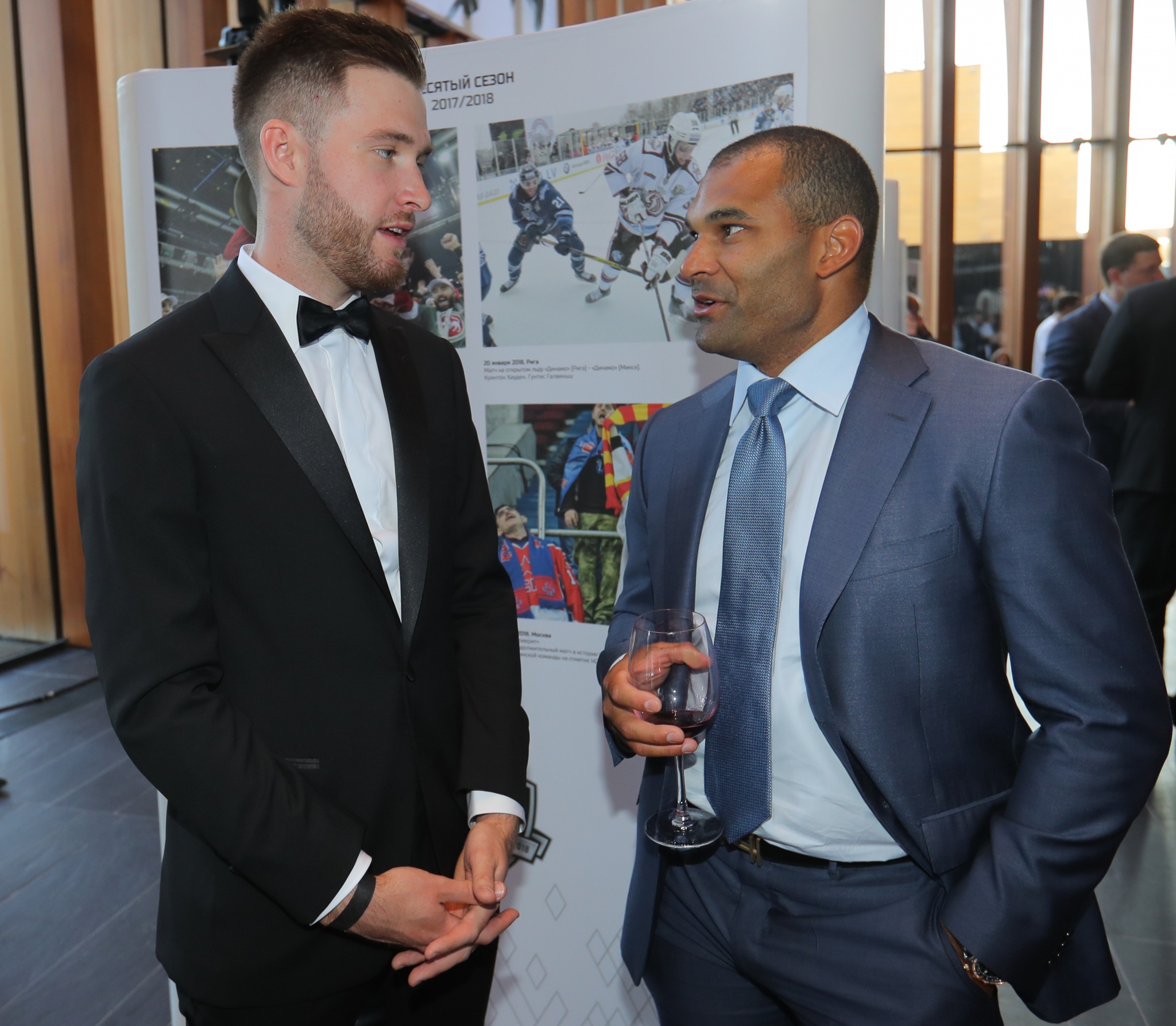 Kravtsov: “It was a big surprise to see my childhood coach!”

Vitaly Kravtsov, Traktor Chelyabinsk forward, and winner of the Best Rookie of the Season Award:

“It was a big surprise for me to see my childhood coach here. I had no idea he would be at the ceremony. I am very glad that Igor Valeryevich (Znarok) was able to attend the event. We still communicate quite often, and he still gives me useful advice, and I'd like to thank him for making me the player I am today.

I came to this event with no expectations, as I was just happy to be here as one of the nominees. And then, to actually win an award – that was awesome! I really did not expect to be up on the stage. Still, I see this award as like a downpayment on my future – I have some very formidable rivals.”

Znarok: “Kravtsov will justify all the faith others place in him!”

“It is really nice that Vitaly received this award, and it was a great pleasure to be with him up on the stage. In my opinion, he fully deserves it. Good on him! He has reached the top through hard work, although so far, of course, the achievements are still minor. But now he has it all before him. He has set himself the highest goals and his fighting spirit will help him reach them.

Of course, this award puts a little pressure on him, and he is only 18, but I believe he is one of the most promising players in the world. We haven't had such a player for a long time. He'll will justify all the faith others have placed in him, and I'm sure he won't let success go to his head. Vitaly is a sound, sensible guy. And I think he will get even better in the future.”