The Directors and General Managers of the KHL clubs met in Moscow to assess this year’s 10th anniversary season, discuss the calendar for 2018/19 and talk about the further development of the league as far as 2023.

The KHL presented the meeting with the latest club ratings, based on the indicators from the 2017/18 season. The ranking system contains eight parameters, each of which carries a certain weight in the overall standings.

The club ranking system was first introduced in the 2016/17 season. Each parameter is calculated twice a year: when the competing clubs for the following season are confirmed (by March 15) and when the results of the most recent season are reviewed (by May 15). In all eight parameters, the results of the last three seasons are taken into account. 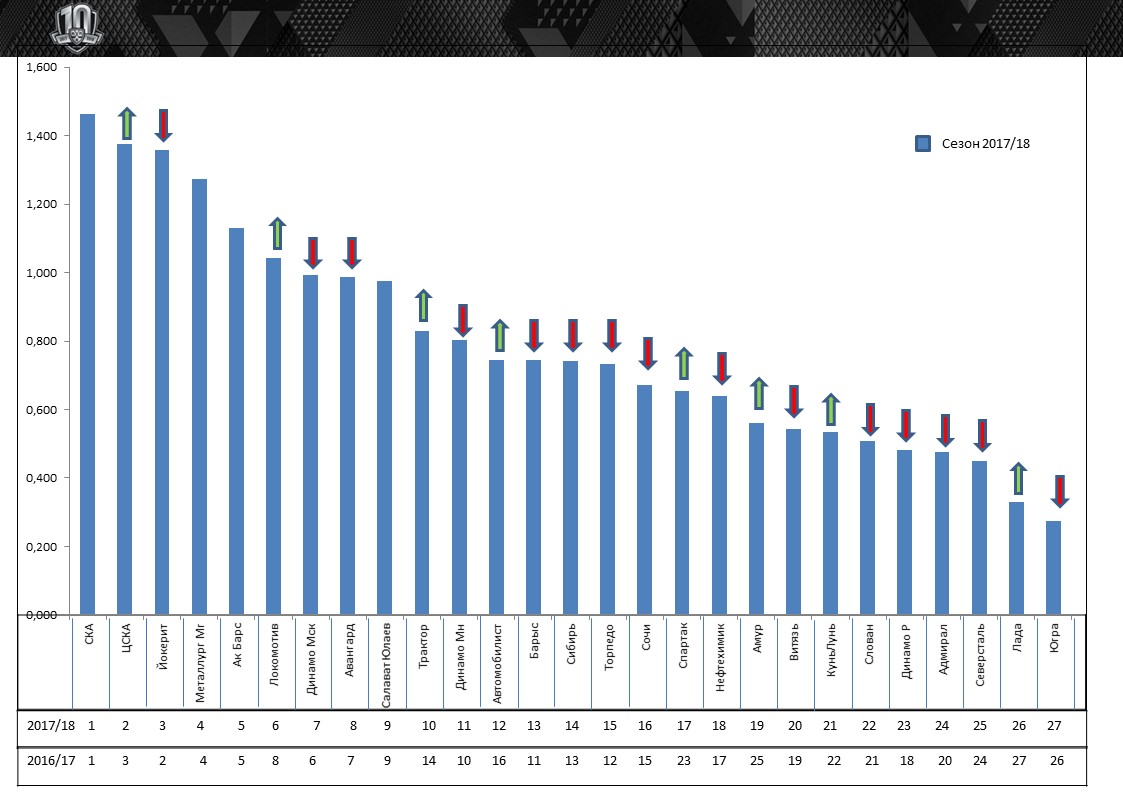 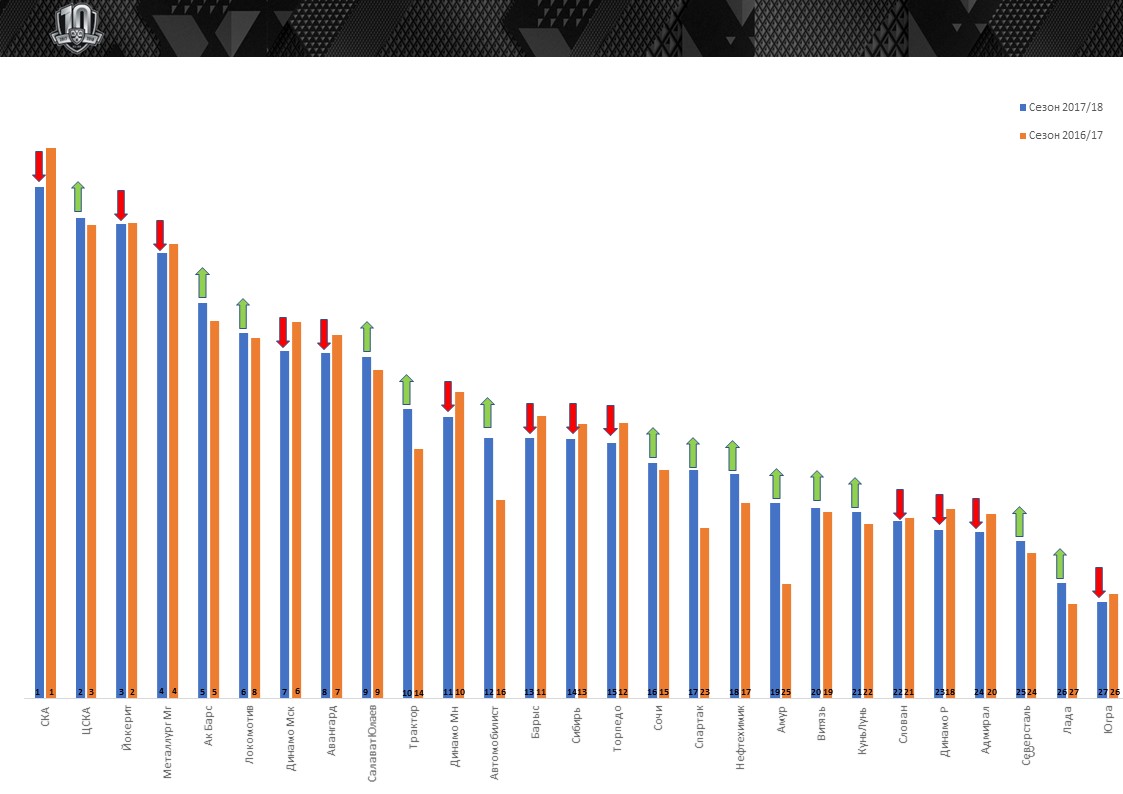 Eight clubs out of 27 clubs have risen up the rankings. The biggest improvements were shown by Traktor (14th place to 15th), Spartak (23rd to 17th) and Amur (25th to 19th). That was achieved thanks to better results on the ice: Traktor won bronze after reaching the Eastern Conference Final while Spartak and Amur both reached the playoffs for the first time in many years.

Fifteen out of 27 clubs were in a lower position compared with the previous season. Dinamo Riga suffered the greatest fall, dropping from 18th to 23rd place. Two further clubs, Admiral and Torpedo, fell four and three places respectively. Results on the ice affected this, with each of the clubs performing less strongly. In the case of Slovan, Torpedo and Admiral, late payment of salaries also influenced the outcome.

Each club will receive an individual analysis of the changes in its ranking parameters within the next few days.

In line with its development strategy, the KHL is working towards an optimized tournament schedule. The 11th KHL season will start on September 1, 2018, and the regular season will run until February 22, 2019. Each team will play 62 regular season games. Thanks to the increase in the number of games, fans next season can look forward to more derby clashes within the conferences and divisions, and more match-ups between the big rivals around the league. The pauses for international games will remain as before. 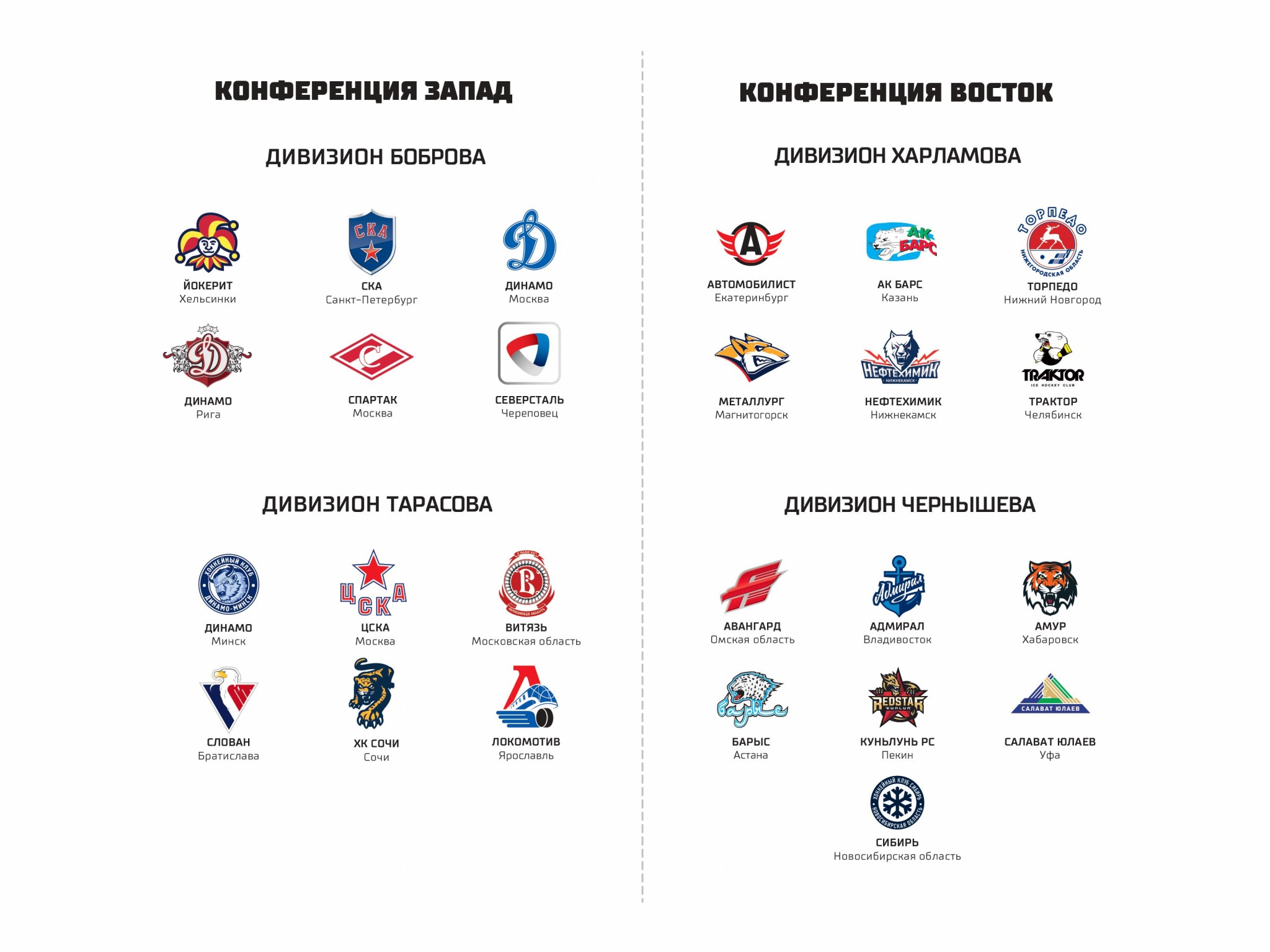 To promote the KHL brand throughout Europe, several games will be staged beyond the league’s traditional borders: in October, some games will take place in Vienna, Austria; in November in Zurich, Switzerland.

The first season of a new Olympic cycle makes it possible to look at new ways of staging the playoffs for the Gagarin Cup. Thus, in the first round of the playoffs, two match-ups from the Western Conference and two from the East will be played on the same day; on the second day, the two remaining pairings in each Conference will take place. The second stage of the KHL season will run from February 25 to April 25.

The planned announcement of the schedule has been put back to a later date. This is due to the significant changes caused by CSKA Moscow’s decision to move to the VTB Ice Palace.

Forward motion: KHL development until 2023 – financial stability for all clubs

Significant steps are being undertaken towards the implementation of the KHL’s development strategies, including efforts to maximize each club’s commercial potential. To ensure that club’s meet the strategy’s proposal that at least 25% of every club’s total income is derived from its commercial activities, it is essential that the clubs themselves become stronger in this area.

Adopting the principles of Financial Fair Play will ensure control over excessive spending and establish standard targets for items of each club’s budget. The Committee for the Control of the Financial Activity of Clubs has already begun its work.

The KHL will continue to make an annual payment to clubs from the TV rights. This sum will go up by at least 8% if the league successfully implements its strategy of broadening its geographical base. Additional payments to clubs from some of the KHL’s other commercial revenues are also planned. At the same time, clubs which break the regulations and incur fines will start to see part of these payments withheld.

The development of arena infrastructure continues to be an important part of the KHL’s work. Over the course of the last three seasons, most clubs have fully replaced the boards around their ice pads with new, safer ones in accordance with the established timeframe. At the start of the 2019/19 season, the KHL will carry out planned checks in every arena to ensure that regulations about lighting are being fulfilled.

The regulations will be supplemented by further requirements in respect of the spectator experience. An important part of this will include the creation of up-to-date ticketing services for fans.

The KHL is the only professional sports competition in Russia that carries out anti-doping testing under the aegis of WADA. In recent seasons, the planned increase in tests has never dropped below 10%. An Anti-Doping education program is under development to increase the awareness of club staff and players, as well as players’ families, spectators etc. To combat the effects of concussion injuries, the SCAT-5 protocol will be implemented from the beginning of the 2018/19 season.

In the 2018/19 season, two ‘Videogoal’ cameras will be installed on every blue line to ensure any moment of the game will be available for review. In the coming two or three years we plan to install another four cameras.

Every year, the KHL introduces new ideas to improve TV coverage with a view to attracting a larger audience of viewers. The viewing figures for KHL games on Match TV this season are up on the previous year. The number of games available in HD format went up 87%. More and more territories are watching KHL broadcasts – this season the league was shown in 32 countries, including Great Britain, Germany, Austria and Luxembourg.

A new flagship production format was introduced, "The Bigger Picture", which enables broadcasters to show the spectators a more complete picture not only during the game, but also before and after, due to access to the teams’ locker rooms for interviews with coaches and players.

The 2017/18 season also brought a new record for the number of games shown live from the MHL youth league (116 games).

A new system for recording the TV broadcasts of games was introduced this season and regional and international licenses have operational access to this. Seventeen regional TV companies ordered games via this system and received all the necessary information about the broadcast.

The league’s international TV rights are handled by Lagardere, one of the largest international agencies. A four-year contract includes a minimum guarantee of annual growth.

The use of licensed products to expand the KHL brand targets not only traditional hockey fans but also a wider audience. This is becoming possible thanks to the ever-growing range of non-sporting goods on offer, including those available in leading Russian retail chains.

The clubs are expected to modernize their internet resources, which at present are not always in line with current needs. At present, only 20% of clubs have a dedicated mobile app. In this light, the KHL is planning to introduce minimum requirements for the internet presence of its clubs, and also to ensure that each team can produce an adapted version of the KHL app.