World Championship quarter-final day brought battling defeats for Russia and Latvia in Copenhagen. The Russians went down to Canada in overtime, while Latvia pushed defending champion Sweden all the way before losing 2-3. In Herning, the USA defeated the Czech Republic 3-2 and Switzerland shocked Finland by the same scoreline.

Russia’s dream of becoming only the second country to win Olympic and World Championship gold in the same year is over. A 5-4 overtime loss against Canada in Thursday’s quarter-final ended the Red Machine’s journey in Copenhagen. It’s the first time since 2013 that Russia has not brought home a medal from the Worlds.

The decisive blow was a power play goal from Canada’s Ryan O’Reilly, tapping home a delicious Connor McDavid assist while Kirill Kaprizov sat out a contentious slashing call. The young forward, Russia’s overtime hero in Korea, was left disconsolate here. Afterwards, he said: “My penalty decided everything. I broke the rules, I shouldn’t have got involved there. But I didn’t think the refs were going to call the penalty. It was their call.” 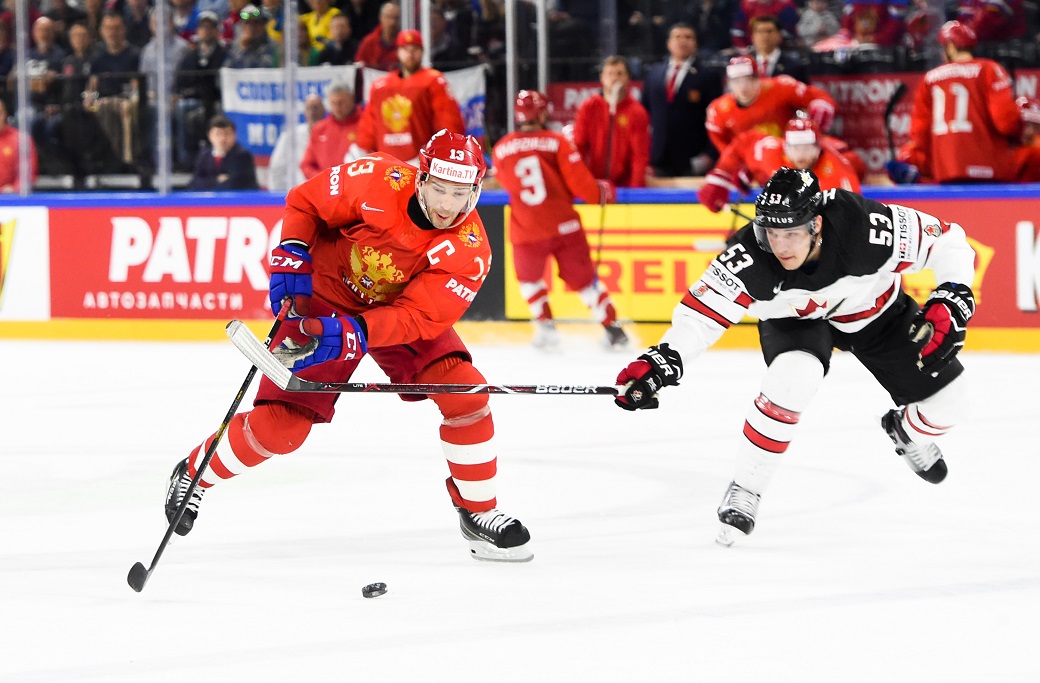 The last time these two rivals met on World Championship duty was in Cologne last year. On that occasion, Russia stormed into a 2-0 lead, only for it all to fall away in the third period when Canada hit back with four goals to win it and reach a third successive final.

This time, for a moment, it seemed that the reverse might happen. Russia, sluggish at the start, trailed 0-2 in the second period but hit back to tie the scores midway through the game with a quick-fire salvo from Ilya Mikheyev and Alexander Barabanov. The game was a barn-burner and the teams traded four more goals in a pulsating third period. Canada led twice more; Russia, like a horror-movie monster, refused to play dead. Sergei Andronov and Artyom Anisimov got the other Russian goals. 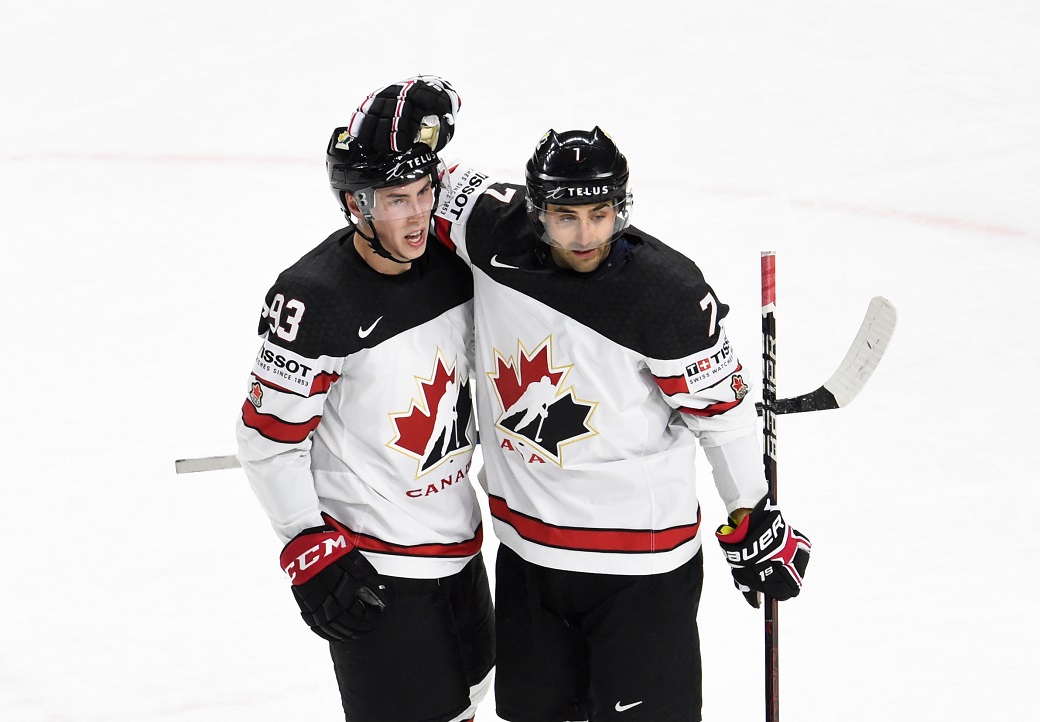 Despite the thrilling game – and the huge character Russia showed to rebound after a flat first period and turn this into yet another Titantic edition of international hockey’s biggest rivalry – Anisimov could not hide his disappointment in the end.

“Missing out on the medals for the first time since 2013 is a failure,” he said. “We could have achieved much more. We had a really good team, we could have won the tournament. We just came up short, we lost to Canada in overtime.”

And that slow start? “You could say we weren’t on our game in the first period but don’t forget this was a quarter-final against Canada,” he said. “We adapted, we started playing our hockey, moving the puck. Their goalie allowed a lot of rebounds, we just needed to get more shots away. When we started shooting, the goals started coming.” 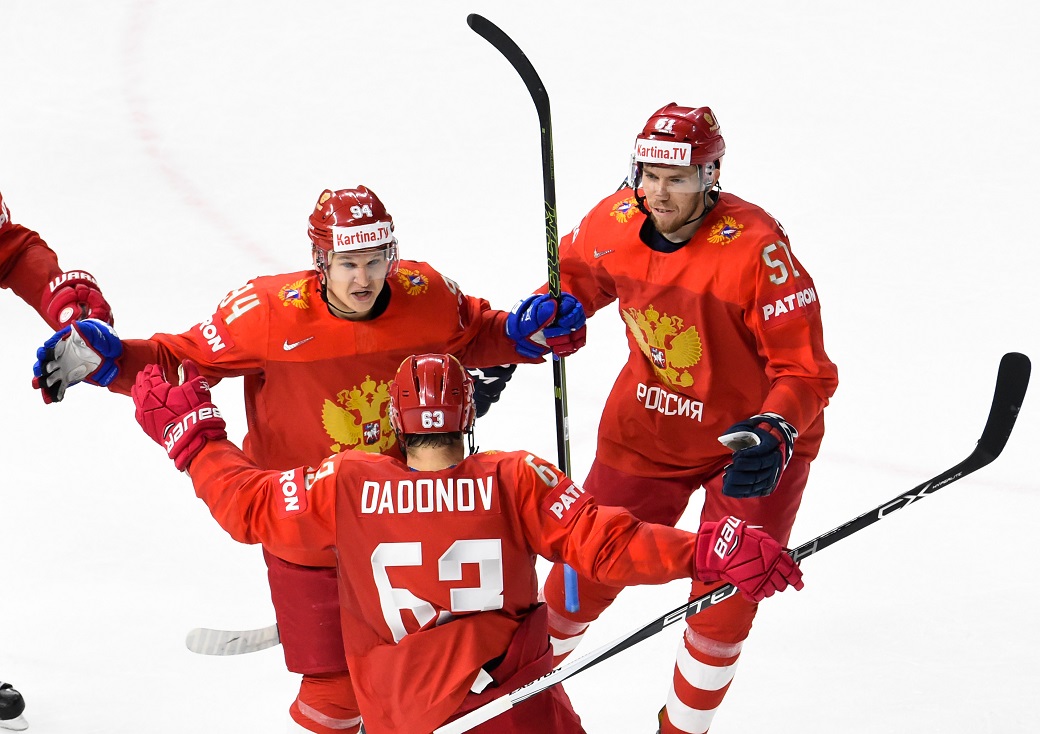 Andronov, who was in the box for the first two Canadian goals, was asked about the refereeing. “It’s not for me to judge,” he said, “but to get penalties like the ones we took …

“You can’t give penalties like that. I think there was nothing in about half of them. Especially in overtime. If we’d only taken half of those penalties, our job would have been much easier.”

Head coach Ilya Vorobyov admitted that it was the most painful loss of his career. “We could have beaten Canada,” he said. “We were so close. It shows the depth of the Canadian roster: last year O’Reilly was on the top line, this year he was on the second.”

As for the tournament as a whole, Vorobyov added that it was played at a very high level, unusually high for an Olympic season.

Canada now moves on to play Switzerland in the semi-finals. The Swiss got a shock win over Finland in Herning and goes to the final four for the first time since 2013 – coincidentally the last time Russia failed to reach the semi-finals. 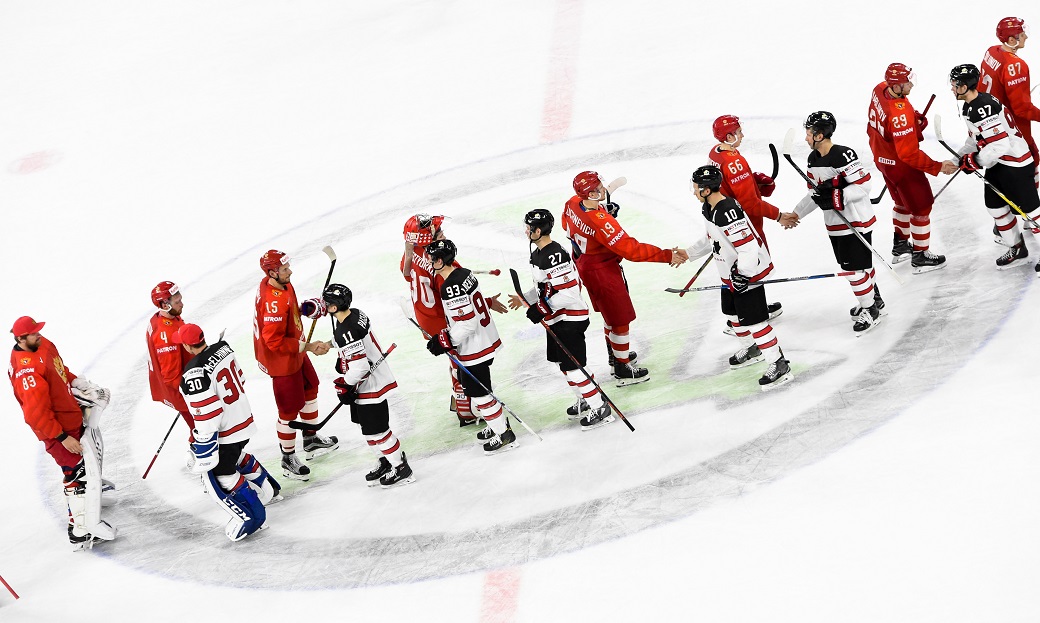 Latvia hadn’t been in a quarter-final since 2009, when an up-and-coming coach called Oleg Znarok was behind the bench. This season the team came closer than ever to reaching its first ever semi-final.

On paper, it looked a mismatch: Sweden had been imperious in Group A, winning every game. Latvia, meanwhile, crept into the quarters at the last moment with a 1-0 win over Denmark. But the rugged Latvian defense had tested both Canada and the USA in the group phase, and it put pressure on Sweden here. A goalless, almost chanceless first period wasn’t what the Tre Kronor expected. A middle frame that opened up but finished at 1-1 with Latvia coming on strong as the intermission approached definitely wasn’t in the script. On the balance of play, it was entirely plausible that Bob Hartley might lead his team to a historic victory.

Only in the third did Sweden gain a measure of control. Viktor Arvidsson scored early in the frame, Oliver Ekman-Larsson added a contentious third after a scrum on the Latvian crease. Rudolfs Balcers got one back but the Swedes held on.

Miks Indrasis, a regular for Latvia on the international stage admitted to mixed feelings after the game. “Sweden's a good team, of course, but we had our chances too,” he said. “That 5-on-3 late in the second could have changed the game if we'd managed to score.

“I could say I'm happy with the tournament, but I could also say that I'm not. We wanted to go further and we believed that we could.”

Saturday’s semi-finals will be played in Copenhagen. Sweden plays the afternoon game against the USA (16:15 local time) then Canada plays Switzerland at 20:15.