The big clash is ON! Russia will face Canada in Thursday’s World Championship quarter-final after finishing second in Group A behind Sweden. A 1-3 loss to the Swedes on Tuesday night set up the Trans-Atlantic classic. Latvia also had plenty to cheer after a 1-0 victory over Denmark saw the Baltic State pip the host nation to a place in the QF.

Defending World Champion Sweden beat Russia’s Olympic gold medallists in a hugely entertaining game in Copenhagen. Despite an early Kirill Kaprizov goal giving Russia the lead, this was always a hard-fought battle. Swedish goalie Anders Nilsson, once of Ak Bars, made 30 saves to frustrate Ilya Vorobyov’s men and the Tre Kronor penalty kill did a fine job of neutralizing the threat Russia posed on several power play in the first half of the game.

It all came unraveled for the Red Machine in the latter stages of the second period, though. Rickard Rakell tied the scores, then provided the screen in front of Vasily Koshechkin as Mika Zibanejad fired Sweden in front. A brave third-period rally was not enough to save Russia, and a late empty-net goal from Mattias Ekholm secured the win for Sweden.

CSKA forward Sergei Andronov was not too disheartened by Russia’s loss. “It was a high-quality game, like a real playoff game,” he said “Things went wrong for us at the end of the second period. Against a team like that you need to make the right decisions. They have so much skill, they will punish any lapse.

“There where times when we needed to simplify things, especially when we were getting tired. That’s something we need to take from the game, something we can learn from for the future.” 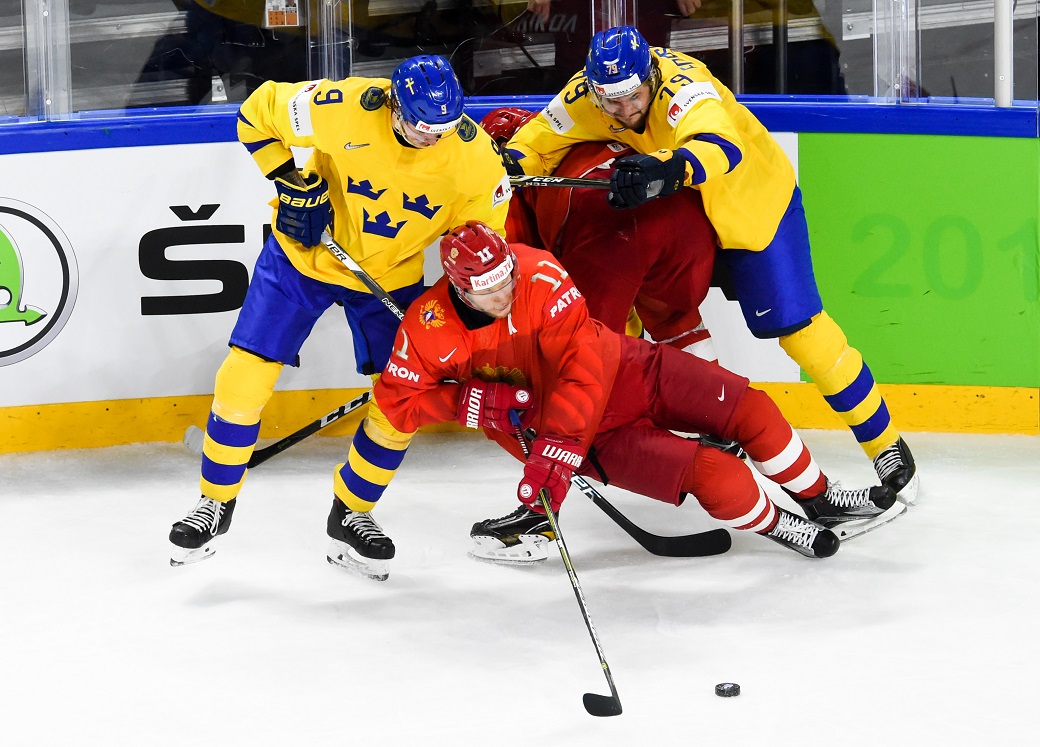 As for facing Canada, Andronov observed that any quarter-final opponent would be testing, while Evgeny Dadonov added that the only way to win medals was to beat the best. Nikita Gusev, who produced another sublime assist for Kaprizov’s goal, was frustrated by the chances Russia missed. “I had a couple of chances that I got wrong, and there were a couple of times when the puck bounced badly for me,” he said. “But, of course, those are the chances that we have to take.

“At times the Swedes played recklessly so we got plenty of power plays. We just needed to take those chances. It’s hard to win with only one goal.”

Earlier in Group A, Switzerland ensured fourth place and a quarter-final match-up against Finland thanks to a 5-1 victory against France. But the big story for many was the end of Dave Henderson’s 14-year reign as head coach of Les Bleus. In that time he and assistant Pierre Pousse have established France in the Elite Pool.

One of the key players in that success has been Stephane Da Costa. Avtomobilist’s new signing was unable to play in Henderson’s farewell, though: he’s been struggling with ankle and wrist injuries in Copenhagen and failed a late fitness test.

Belarus saw its miserable campaign come to an end with a 4-7 loss to Slovakia. Sergei Pushkov’s team produced an improved performance and even looked capable of snatching a win after rallying from 0-2 to lead 4-3 in the third period. Sergei Drozd snapped his record-breaking non-scoring run with an assist as Alexander Kitarov got the team’s first goal of the game; there were also tallies for Charles Linglet, Evgeny Kovyrshin and Pavel Vorobei. 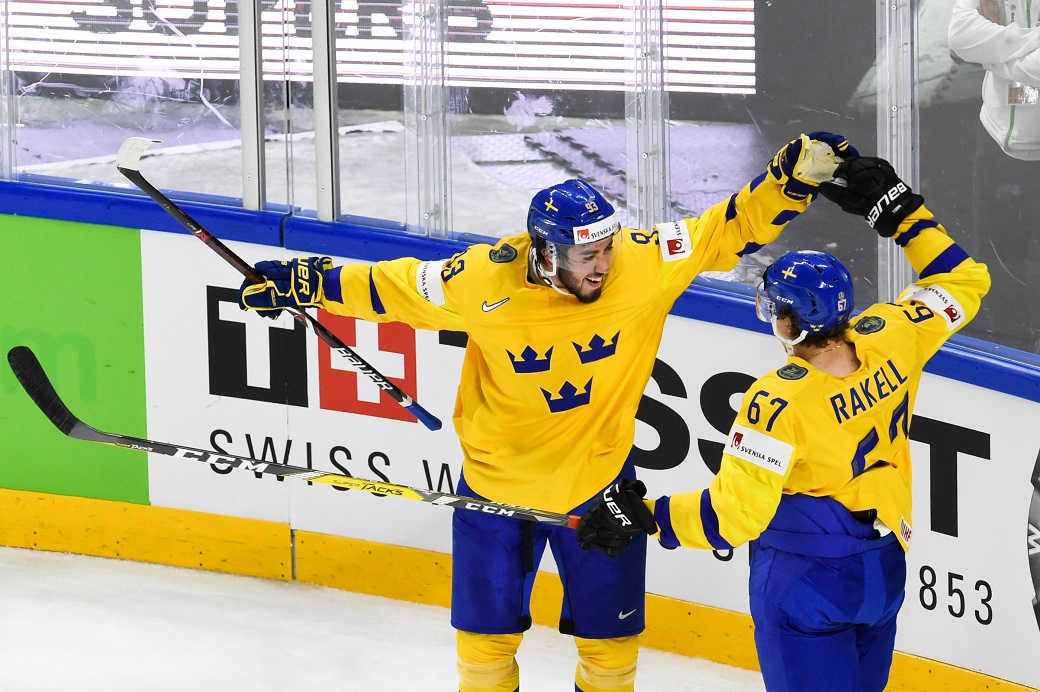 Latvia reached its first World Championship quarter-final since Oleg Znarok was head coach of the Baltic nation, and is set to play Sweden in Copenhagen on Thursday.

The Latvians advanced in a win-or-bust showdown against Denmark, breaking the host nation’s hearts with a 1-0 victory. Latvia took the lead in the 10th minute through Andris Dzerins, assisted by Miks Indrasis but it was the team’s defensive performance that earned the vital victory. Elvis Merzlikins made 19 saves on the night, but it was the efforts of a blue line brigade that did a great job of restricting Denmark to half chances for much of the evening.

Earlier, Finland handed the USA a 6-2 defeat to secure top spot and a quarter-final clash with Switzerland. Sebastian Aho, the leading scorer in the World Championship, led the way with a hat-trick and there was a goal for Jokerit’s Markko Anttila. Kunlun Red Star newboy Veli-Matti Savinainen got two assists, while Eeli Tolvanen and Tommi Kivisto also had helpers.

Canada wrapped up its group phase schedule with a 3-0 victory over Germany. That was enough to secure third place for a Canadian roster that has alternated between impressive and average thus far. Germany was unable to get close to its Olympic form: PyeongChang’s silver medalists were down in sixth place in Group B.