Nikita Gusev got his first goal of this year’s World Championship to help Russia beat Slovakia 4-0 and maintain its hopes of securing top spot in Group A. In Group B, meanwhile, Latvia took Canada to overtime as it warmed up for a showdown with Denmark to determine who will claim the remaining quarter-final berth.

Russia cruised to a 4-0 victory over Slovakia, confirming a top-two finish in Group A and ensuring that the team will not face a trip to Herning for its quarter-final. Victory over Sweden tomorrow would secure top spot in the group and a tie against the weakest of the teams qualifying from Group B – potentially Denmark or Latvia.

Against Slovakia, Russia eased into a 2-0 lead in the first period on goals from Maxim Mamin and Nikita Gusev, with the SKA forward getting his first goal of the tournament to add to his pair of assists against Switzerland. The scoreboard did not tell the full story of Russia’s dominance, with Slovakia limited to just two shots at Igor Shestyorkin in the Russian net.

“In the first period it was hard because there were no shots on me,” the SKA goalie said. “In the second period I was involved in the game more, I had more to do. The guys did well, blocking a load of shots and helping us to get the win.”

The middle frame was played at a slower pace, with Slovakia spending more time on the attack but struggling to create dangerous chances. However, Nikita Zaitsev dismissed suggestions that Russia began playing more defensively as the game went on.

“We played well, it felt like we were in control of the game,” said the former Sibir and CSKA defenseman. “I don’t think we got defensive, we tried to play the same way throughout the game and we should have scored more goals.”

Those goals came late on, with Slovakia hit by two empty-net tallies. Maxim Shalunov and Ilya Mikheyev put some gloss on the scoreline.

Captain Pavel Datsyuk was keen to see his team maintain its early intensity in future games. “Our first period was good,” he said. “In the second and third we already started seeing little mistakes creep into our game. We started to allow them some counter attacks and the pattern of the game was different.” 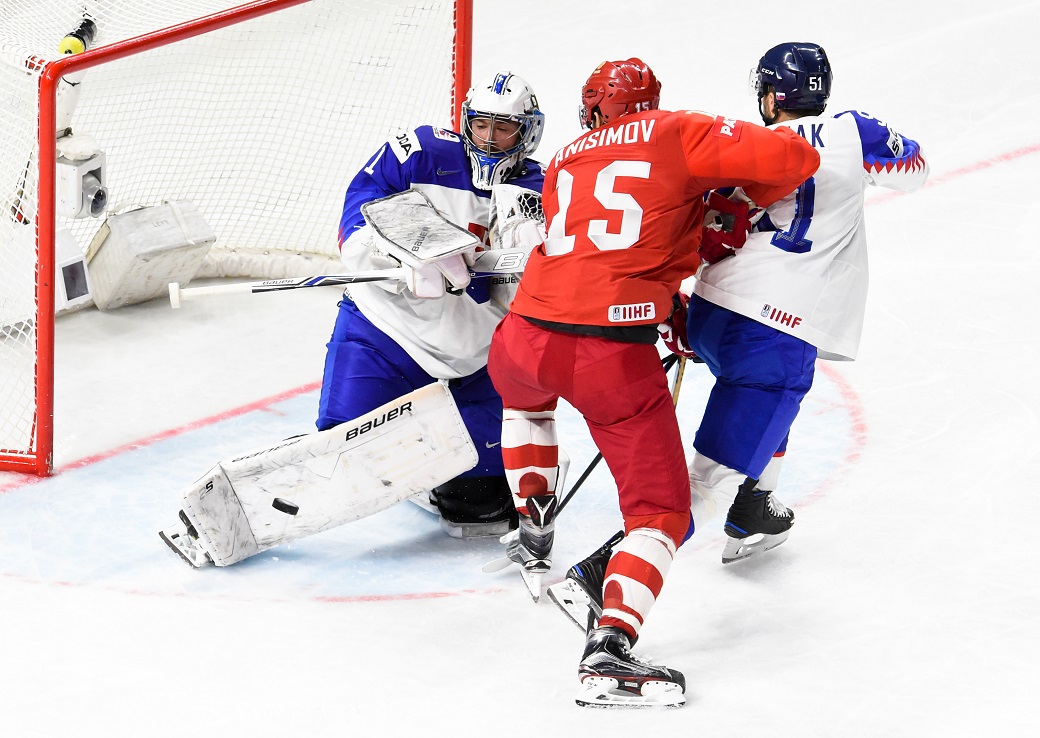 While Russia moves calmly into the knock-out phase, Slovakia must hope that France can get a win over Switzerland in Tuesday’s first game. If the Swiss slip up, the Slovaks can claim fourth place with a win against Belarus.

In Group A’s other game, the Czech Republic sealed third place with a 4-3 victory over Austria. Two goals in the first three minutes put the Czechs in control, but a late double from Austria’s Michael Raffl made for a tense finish. Tomas Hyka led the Czech scoring with two goals and an assist, Dominik Kubalik had 1+2.

Latvia came close to causing a sensation as it battled Canada all the way in Herning. In a gritty defensive display reminiscent of the teams’ meeting at the Sochi Olympics, goalie Kristers Gudlevcis made 31 saves to keep the Canadians at bay and force a 1-1 tie. It was a measure of Latvia’s struggle that it managed just two shots in the third period: fortunately, Kristians Rubins put one of them in Darcy Kuemper’s net to force the action into overtime.

There was no fairytale ending – Connor McDavid snatched the winner within seconds of the restart – but Latvia’s bonus point for an overtime loss means that any kind of win against Denmark tomorrow will put the team into the quarter-finals at the host’s expense.

“If there is anything we can take from today’s game it is our defence,” said Latvian forward Rodrigo Abols. “We kept them to the outside. It might have looked like they had a lot of puck possession, but it was all on the walls. We were trying to protect the middle because that is what they are looking for.”

Korea’s first ever World Championship campaign came to an unhappy end with a 0-3 loss against Norway. The Koreans finished with defeats in all seven games and lopsided goal differential of -44. Tobias Lindstrom, Thomas Olsen and Jonas Holos got the Norwegian goals as the Scandinavians made absolutely sure of their top-flight status.