Russia rests ahead of Slovak test – the KHL in Copenhagen

It was a quiet day for Russia – and for Czech goalie David Rittich – but there were goals aplenty elsewhere as the group phase of the World Championship nears its end.

After a draining battle with Switzerland on Saturday night, Russia’s Sunday skate was optional. Most players chose to rest up and recuperate ahead of the upcoming game against Slovakia, leaving coach Alexei Zhamnov to do most of the talking.

He was full of praise for Nikita Gusev after the SKA forward’s two assist in that win against the Swiss. “Gusev is a real master,” he said. “He’s one of our most talented players and he gives us a real boost on offense.”

He also played down concerns that this Russian team has looked less impressive in its last two games, dismissing suggestions that Oleg Znarok’s Olympic Athletes were a stronger team the Vorobyov’s World Championship roster.

“Since the Olympics we’ve brought in several new players,” Zhamnov added. “We’ve got guys playing in their first World Championship, it’s a different team. And, of course, at the Worlds we are seeing players arriving from the NHL. The skill level is probably higher than at the Olympics. But don’t forget that the tension and passion of the Olympics makes that a tough tournament as well.”

Russia plays Slovakia on Monday evening. Victory would set up a showdown with group leader Sweden to claim first place and a quarter-final against the weakest qualifier from Group B. Defeat would put Russia in danger of finishing third or fourth in the group and having to make a three-hour rail journey to Herning for its first game of the knock-out rounds. 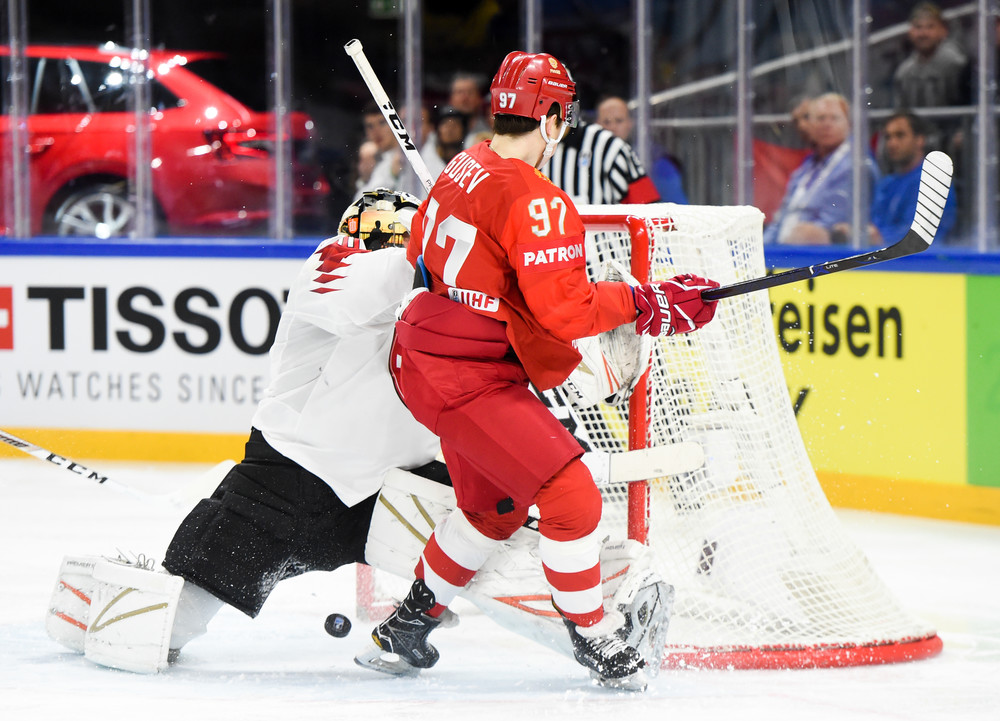 Horak impresses for Czechs, Hornqvist starts with a goal for Sweden

Roman Horak, a key figure for Vityaz in the past three seasons, scored twice as the Czech Republic romped to a 6-0 victory over France. David Pastrnak added two more as he continued his whirlwind start at the Worlds, and goalie David Rittich was left slightly disgruntled at having just 10 shots to save all day.

“I haven’t faced so few shots since I was in seventh grade,” he complained. “I was standing there wandering what to do with myself. In the end, I was thinking about how I would have my steak this evening, I got tired of standing there for a couple of hours.”

There was little time to be bored in the second game in Group A, where Sweden overcame Switzerland 5-3. Much like Russia’s game against the Swiss the day before, a late rally kept things interesting before the favorite got the expected result. Patric Hornqvist, newly-arrived from Pittsburgh, was among the Swedish scorers.

In Herning there was another shock result as Germany defeated the Finns in overtime. The Finns had been drawn into a war of words after beating Canada 5-1 and being accused of cheating for their pains, but seemed to be on course for a routine success when Eeli Tolvanen opened the scoring in the first period. The Germans hit back with two second-period strikes but Sebastian Aho tied the scores late on. In overtime, Markus Eisenschmid got the winner for the Olympic silver medallist, but the result means it’s unlikely that Germany will progress beyond the group stage here.

The earlier game was a goal feast, with the American power play rampant once again. After putting 13 past Korea in its previous game, the USA added nine more against Norway, three of them on the PP. Patrick Kane scored twice to lead the American scoring, Cam Atkinson had 1+2. The Norwegians managed three in reply, with the Olimb brothers both on the scoresheet. Norway must now beat Korea in its final game to guarantee its survival in the Elite Pool.