Nikita Gusev returned to action with two assists as Russia earned a tight 4-3 win over Switzerland, but it was a disastrous day for Belarus as a 0-4 loss to Austria saw the country drop out of the Elite Pool for the first time since 2003. In Herning, Eeli Tolvanen had a goal and an assist as Finland shocked Canada with a 5-1 victory.

It wasn’t a vintage Russia performance, but it was good enough for a 4-3 victory over a stubborn Swiss team. Better still, Nikita Gusev’s return after illness was a success: two assists, and a new spark to the team as his line with Pavel Datsyuk and Kirill Kaprizov recalled those Olympic glory days.

“Basically I thought it went OK after such a long break,” Gusev said. “The first two periods were good but in the third it was hard. Overall it was good. Our line started creating chances immediately and if we'd taken them from the start the game would have been much easier.”

Russia was denied by the post twice in the early minutes, but could not break through until the second period. Then Gusev’s pass set up Datsyuk and his miscued shot was put away by Kaprizov. The Swiss responded with a power play goal, but almost immediately Evgeny Dadonov restored Russia’s lead after a breakdown in the opposition’s zone. Then, two seconds before the intermission, Gusev crafted another goal. His feed for Nikita Nesterov sat perfectly for the CSKA D-man, and the shot gave Reto Berra no chance in the Swiss net.

Mikhail Grigorenko led the appreciation: “Gus is one of our best players. It’s always nice to get your leaders back. He’s got a lot of skill, and he showed it today. He had two beautiful assists, and he helps us on the power play a lot.”

Grigorenko would score Russia’s fourth, but Switzerland battled hard in the third period. Goals from Sven Andrighetto and Gaetan Haas ensured an anxious finish but Russia held on to move a single point behind Sweden in the Group A table. 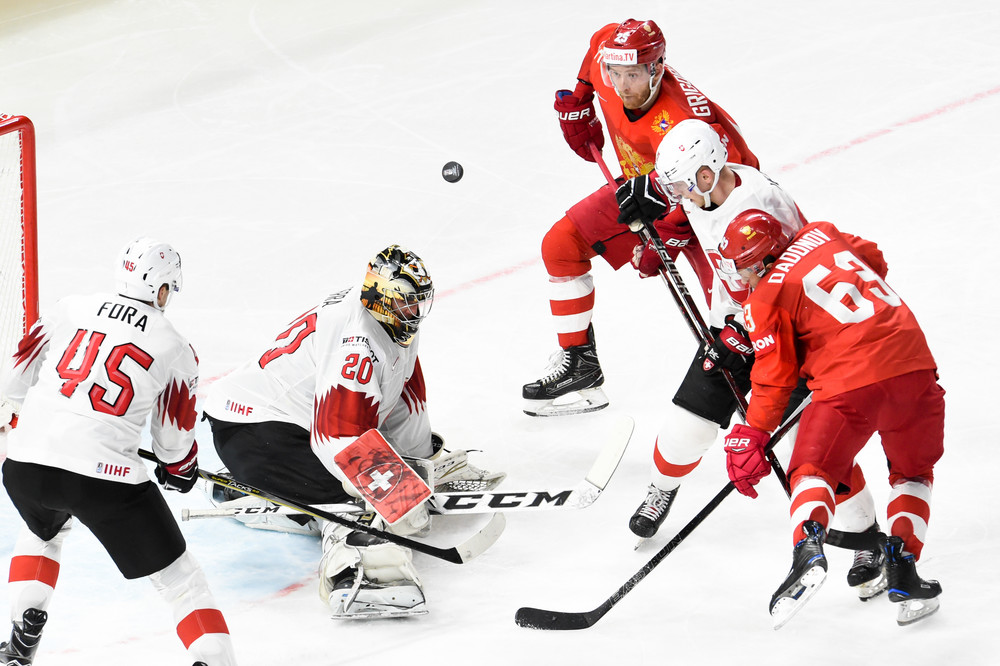 The shambolic Belarusian performance in Copenhagen reached a new and decisive low as Austria romped to a 4-0 victory. The defeat condemns Belarus to Division IA for next season and means Austria is the first newly-promoted nation to survive in the top tier since France in 2008.

The stats make grim reading for Belarus. Six losses in a row, just four goals scored all tournament and no goals in the back-to-back games against the Czechs and the Austrians. Ditching head coach Dave Lewis during the tournament did nothing to lift the team or its results: Belarus was no better today than in its opening 0-5 loss to Sweden.

In keeping with the overall theme of the team’s performances, Belarus gave up an improbably opening goal. Layne Viveiros claimed it, but his point shot profited from an outrageous deflection off Dmitry Korobov to make it 1-0 in the fifth minute. If it started as a farce, it finished as a fiasco: three power play goals put the Austrians in complete control in the middle frame and there was no way back for Belarus after that.

“This was our most important game of the competition, but it felt like we didn't really understand that,” said Dinamo Minsk’s Alexander Kitarov. “We're all experienced players. We shouldn't have allowed ourselves to get so emotional.”

Slovakia falls to Sweden in OT

Slovakia became the first nation to take a point from Sweden in the Championship, but ended up losing in overtime after rallying from 1-3 to tie the game.

Neftekhimik’s Dennis Everberg was among the Swedish scorers while Kunlun Red Star goalie Magnus Hellberg claimed the win. Former Red Star man Marek Daloga was on the scoresheet for Slovakia, as was Ladislav Nagy, previously of Severstal, Slovan, Lev and Dinamo Minsk.

In Group B, Finland produced the performance of the day with a strong power play thumping Canada 5-1. Eeli Tolvanen, fresh off the plane from Nashville, contributed a goal and an assist as the Finns underlined their gold medal credentials. Denmark kept up its push for a playoff place with a 3-1 win over Korea. The Koreans, still smarting from a 13-1 loss to the USA, put up far more of a fight here, but fell behind to a Frans Nielsen goal in the second period. Kisung Kim tied it up, but Denmark was able to put the game out of reach thanks to further scores from Jesper Jensen and Nicholas Hardt. Korea’s faltering PK proved costly once again, and the Olympic host must now beat Norway in its final game to stand any chance of staying up in its first season at this level.

Meanwhile, the host nation will have to contend with Latvia if it is to claim a place in the last eight. Goals from Ronalds Kenins, Guntis Galvins and Andris Dzerins gave the team a 3-1 win over Germany. Miks Indrasis, recently transferred from Dinamo Riga to Dynamo Moscow, hailed a ‘huge win’ as his team remains in the hunt for a quarter-final spot. The issue could well be decided on Tuesday, when Latvia and Denmark go head-to-head.