Day one of the 2018 IIHF World Championship saw a comfortable 7-0 victory for Russia against France before defending champion Sweden made an impressive start in a 5-0 win over Belarus. In Group B, both games went to shoot-outs before the USA defeated Canada and host nation Denmark edged Olympic finalist Germany.

Two goals and an assist from CSKA’s Kirill Kaprizov led the way as Russia got off to a flying start at the 2018 World Championship in Copenhagen. But the man of the moment was not eager to celebrate despite marking his debut in this competition with a big win.

“It was an OK game, we made some mistakes as well,” he said. “We’ll need to keep improving from game to game. We allowed a few turnovers, the coaches are telling us all about it. Even so, it’s good to start with a big win.”

An early triple salvo set Russia on the road in Copenhagen. Evgeny Dadonov and Kaprizov quickly found French cuisine to their liking, feasting on the opportunities afforded by the Gallic defense as this year’s IIHF jamboree got underway in Denmark.

Dadonov was the first to show, enjoying the freedom of French zone to circle around a static back line and feed a dish to Kaprizov in front of Florian Hardy’s net in the eighth minute. 1-0, and the Red Machine was still warming up. It didn’t take long for Russia to add a second. This time, the holes in the French defense were partly explained by a penalty on Damien Raux, but Pavel Buchnevich still had an astonishing amount of time and space on the doorstep to put away the rebound from Mikhail Grigorenko’s slap shot. And two minutes later, Kaprizov returned the favor for Dadonov to smack home a third. Game over, and barely 10 minutes on the clock. 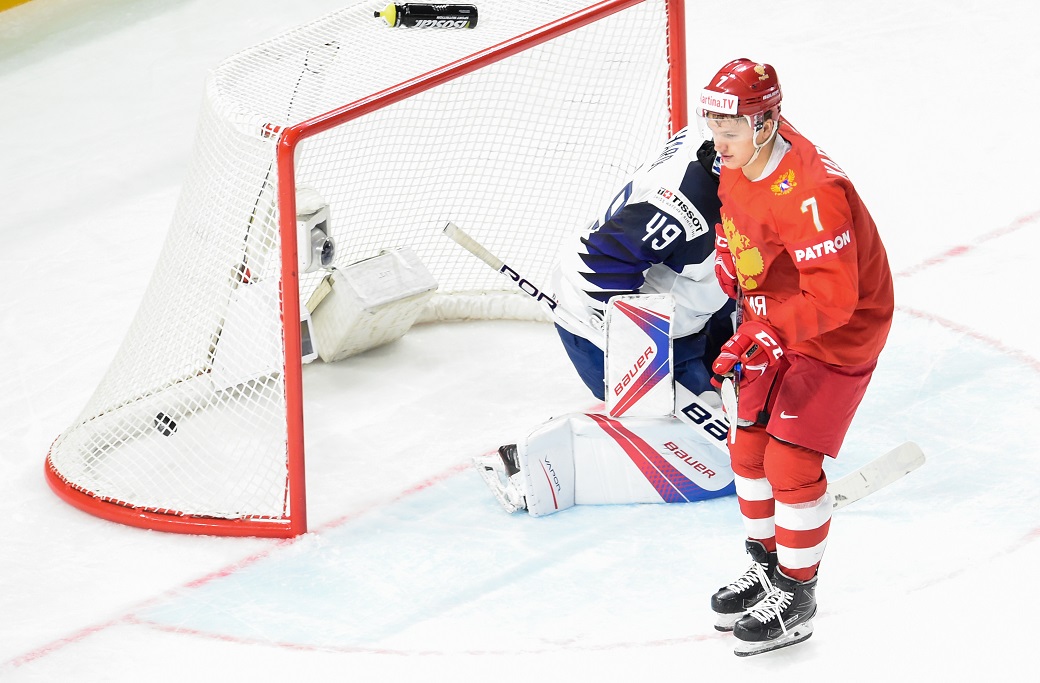 Vasily Koshechkin was a virtual spectator in the Russian net until a French power play late in the opening frame – former CSKA forward Stephane Da Costa hooked back by Pavel Datsyuk to earn his team the advantage. The PP was not hugely dangerous, but Koshechkin did well to hang on as Sacha Treille looked to get on the end of an Anthony Rech slap shot.

The second period brought a noticeable drop in the intensity of the game: it’s a long tournament, and with game one under control the key thing for Russia was keeping the door closed on any French revival, rather than busting a gut to pile up the scoring. A fourth goal did arrive late in the frame when Datsyuk’s defense-splitting pass found Kaprizov and he shot through Hardy’s five-hole.

Hardy did not return for the final stanza, with Ronan Quemener taking over between the piping. He was soon beaten by Alexander Barabanov on a play that combined the sublime and the ridiculous. The SKA forward’s stick-handling to get around Nicolas Ritz was superb; the outrageous deflection off Florian Chakiachvili’s backside was faintly comic. Maxim Shalunov’s laser of a wrister to the top corner a couple of minutes later, converting a Datsyuk feed, was a more satisfying spectacle all round. Artyom Anisimov wrapped up the scoring with the seventh goal late in the game, leaving French head coach Dave Henderson admitting that his team had been mauled by a better side.

“Russia was too strong,” he said. “We seemed a little timid out there in the first period and we were down 3-0. We left guys open in the slot for two goals then another on the power play. We didn’t have the leg that we need to play a good game against that team today. We have to regroup and come back tomorrow.

Russia’s preparations for the tournament have been hampered by an injury to SKA’s Nikita Gusev, one of the key men in February’s Olympic triumph. Captain Pavel Datsyuk said: “Gusev is a skilled player, it was obvious that we missed him. We’ll wait for him [to recover] and then see where we are.”

Russia’s next game is on Sunday against newly-promoted Austria. 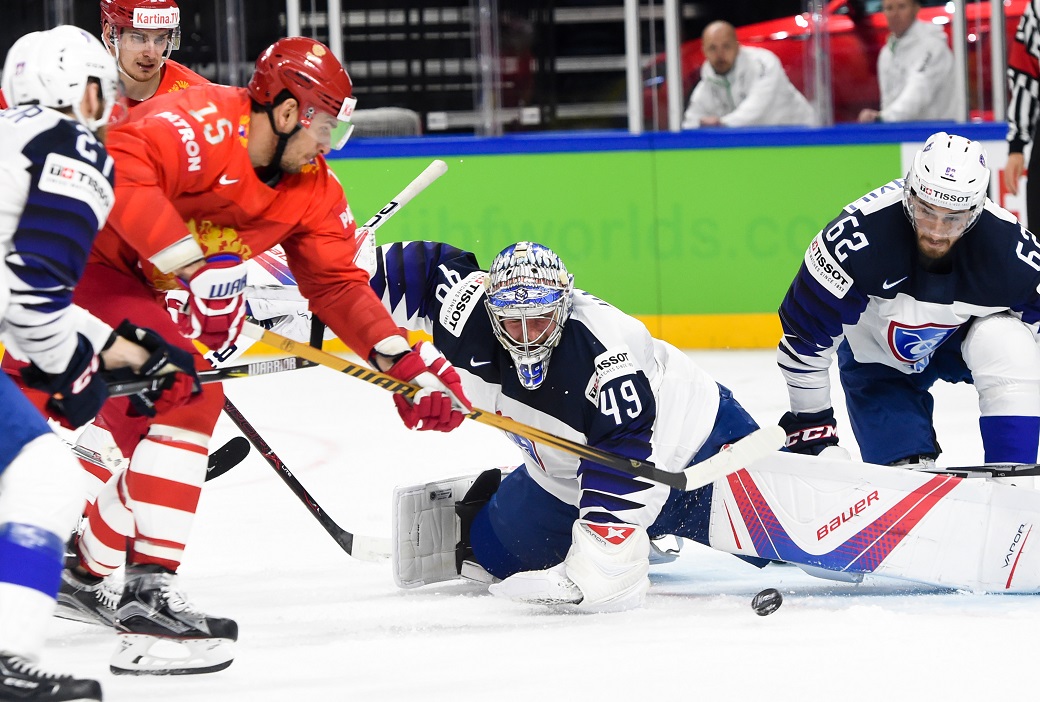 The other game in Russia’s group saw defending champion Sweden take on Belarus. The Belarusians, as usual, had a strong KHL accent and drew heavily on the Dinamo Minsk roster, while Sweden named Neftekhimik’s Dennis Everberg and Kunlun’s Magnus Hellberg in its roster. And it was Hellberg who made the difference, marking his World Championship debut with a shut-out in a 5-0 victory. Everberg collected an assist along the way.

Dinamo Minsk defenseman Dmitry Korobov was left frustrated by his team’s start. “It felt like we only played well for the first 10 minutes,” he complained. “After that we made positional errors, let the game stay too close to our net.”

However, he sounded a defiant note about Belarusian prospects of further progress. “Getting to the quarter-finals is in our hands, we have the strength to do it,” he said. “Next we have another important game against France. Maybe they will be angry after losing heavily to Russia, but we’re angry too now.”

Hellberg, meanwhile, was celebrating the realization of a long-held ambition.

“Winning is the most important, but getting a shutout shows that as a team, we had a really good defensive plan. I saw a lot of shots. They took a lot of rebounds away from me. I’m really proud of the team and how they worked.”

In Horning, the stand-out game in Group B saw Canada and the USA produce a thriller. The Canadians jumped to a 2-0 lead, the Americans turned it around to lead 3-2. Then, after a 4-4 tie, it went to a shoot-out and Cam Atkinson made the difference between the teams.

Host nation Denmark took on Germany’s Olympic silver medallists in the other Group B game and edged a shoot-out verdict after a 2-2 tie. The Danes led twice in regulation, with Jokerit’s Jesper Jensen setting up his namesake from Brynas Gavle for the opening goal and Salavat Yulaev’s Philip Larsen getting an assist as Frederick Storm made it 2-1. The shoot-out winner went to Frans Nielsen.