CSKA handed itself a priceless lifeline in this year’s Gagarin Cup Final, snatching an overtime victory to move within one game of Ak Bars.

With the scores tied at 2-2 in regulation, Kirill Petrov’s second goal of the night earned the home team the win after 12 minutes of the extras. It was a moment to forget for Kazan’s defensive pairing of Atte Ohtamaa and Roman Manukhov: the pair got hopelessly tangled up when trying to bring the puck out of their zone. Alexander Popov was on to it in a flash and, as he fell to the ice, he managed to slip the puck to the unmarked Petrov who capitalized on his clear view of Emil Garipov’s net to fire home the winning goal.

CSKA came into the game knowing that victory was a must. The stats already favored Ak Bars to go on and win the cup – on the four previous occasions that a team has won the first two games of the final, that team has taken home the hardware. The Army Men, though, were boosted by a return to home ice and also welcomed back defenseman Mat Robinson and forward Geoff Platt. CSKA also began the game at a high tempo, creating far more offense in the first period and taking a deserved lead through Petrov in the 14thminute. 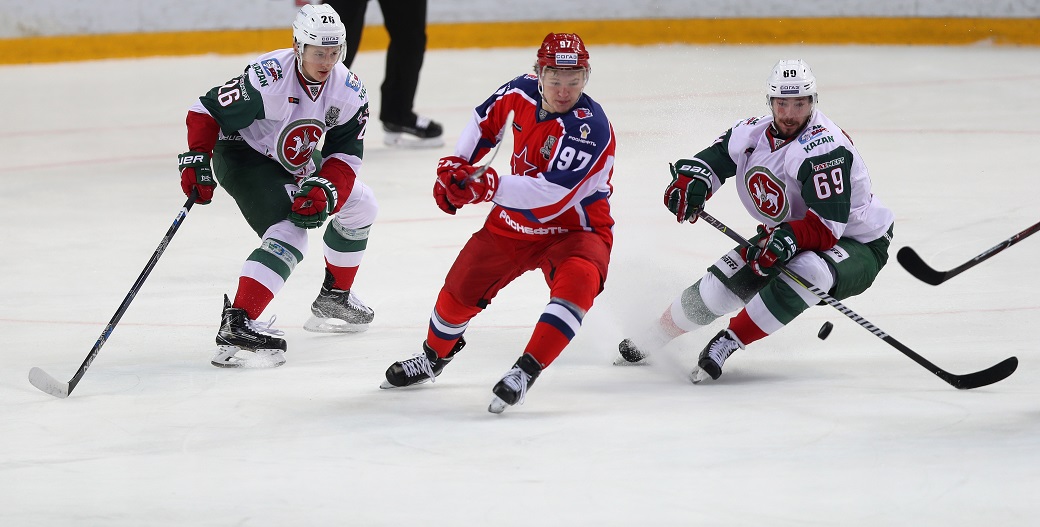 Petrov, a former Ak Bars player, got on the end of an odd man rush after Ak Bars coughed up possession in the CSKA zone. The forward fired home a Mikhail Grigorenko feed and, for the first time in this series, CSKA was ahead in a game.

However, Ak Bars has long been a master of the deadly counter-attack – and that served to slow the home team’s progress. Two goals in two minutes later in the opening frame turned the scoreline upside down. First, Manukhov’s superb defense-splitting pass sent play from end to end. Jiri Sekac collected the puck and fed Anton Lander for the tying goal. Then came Stanislav Galiyev’s latest contribution to this series as the Ak Bars power play punished CSKA again. Vladimir Tkachyov was the architect, advancing into the face-off circle as Galiyev’s movement distracted the home defense. The pass was precise and Galiyev, on the doorstep, applied a deft finish to make it 2-1 to the visitor. That took the Ak Bars forward to 10 goals in this year’s playoffs, making him the leading goalscorer of post season. Team-mate Justin Azevedo is the leading point-scorer with 22.

In a series where goals have been hard to come by, the pressure was firmly on CSKA. The two previous games had finished 2-1 and here, even though the home team had created more of the scoring opportunities, it was behind once again. In response, the Army Men cranked up the offense another gear. 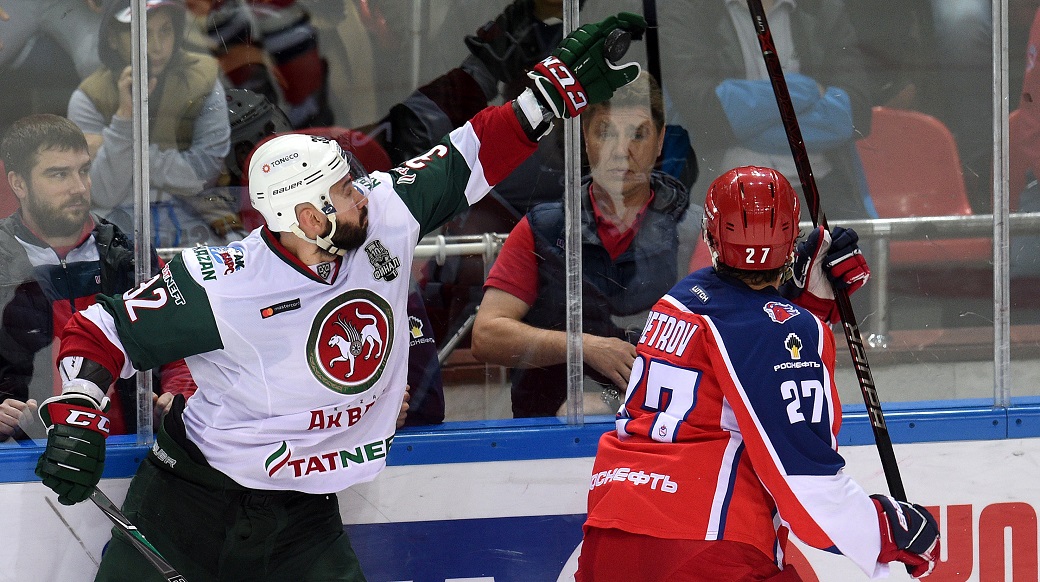 Even so, it took most of the second period for CSKA to get back on level terms. The home team dominated the play, outshooting Ak Bars 12-4, but found Garipov tough to crack in the visitor’s net. It wasn’t until the 39th minute that the Army Men found a way through. Alexei Marchenko’s shot took a deflection off Greg Scott’s stick, lifting the puck away from Garipov and into the net.

The third period could not separate the teams. The best opportunities came early, with Petrov twice going close on the power play and Ak Bars failing to force the puck home after an Andrei Markov slapshot caused confusion on the home slot. As the clock ticked down, however, both teams became more cautious. Overtime beckoned.

The extras began with Ak Bars on the front foot, and Sorokin had to be alert as chances came for Lander and Sekac early on. Gradually, though, CSKA posed more of an attacking threat and, when the chance came for Petrov, the Army Men seized the moment to bring the series back to life.