Lars Johansson has not played a big role in CSKA’s playoff campaign so far – prior to this game, the Swede had just 76 minutes of game time in this post season and had never started. Ilya Sorokin’s form had been so impressive that the young Russian was the obvious first choice. Until now.

Johansson, 30, was handed his chance in Friday’s showdown in St. Petersburg, and produced a heroic performance to help his team snatch a narrow victory. SKA, eager to convert home advantage into a 3-2 lead in the series, spent much of the game on the attack. Johansson faced most of the action in the first two periods, but provided an unbreakable barrier against which SKA’s offense could do little. In the first period, with CSKA barely visible as an attacking force, the Swede made nine saves; in the middle frame he had another 15 as CSKA killed four penalties.

It wasn’t all about the goalie. CSKA’s players blocked an impressive 22 shots over the course of the game, producing the kind of gritty defensive performance that coaches love. The officials played their part, ruling out a possible SKA goal in the 36th minute. After going to the video to have a second look at a Jarno Koskiranta effort, they concluded that Johansson, sitting on his goal line, managed to keep the puck from entering his net and the goal was not given. Johansson also got some help from the piping late in the middle session – Vladislav Gavrikov dinged the post from a tight angle after the goalie had stopped a Pavel Datsyuk effort. 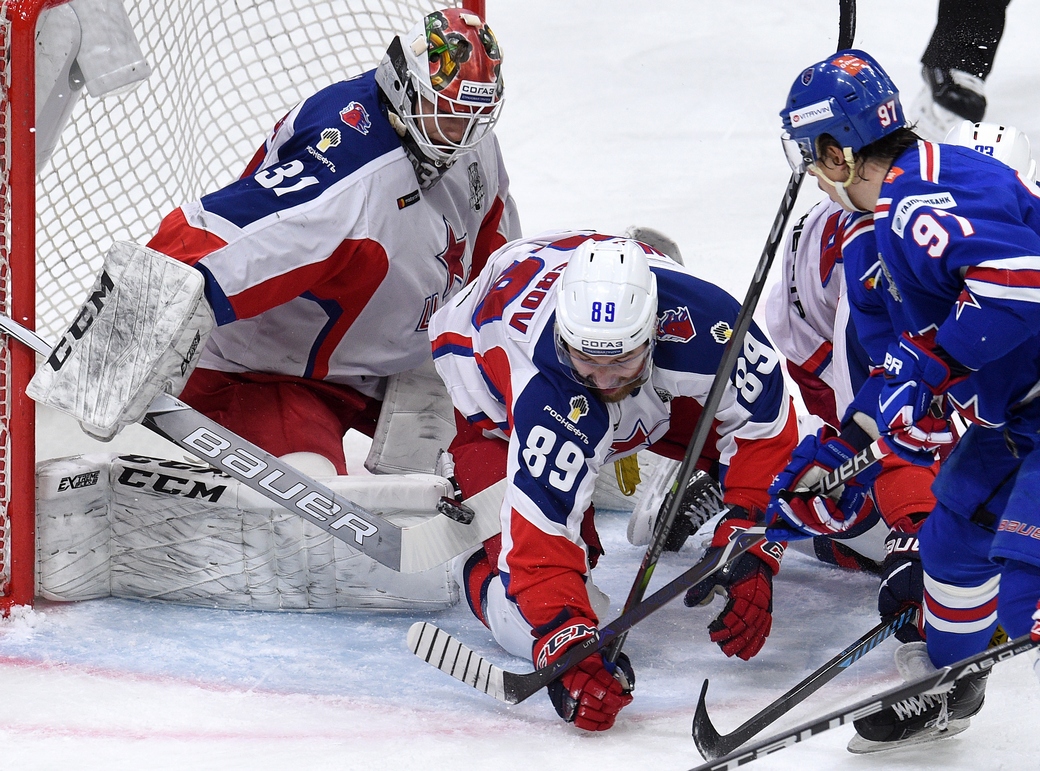 Only in the third did the game change, with the visitor finally starting to create and getting its reward with the only goal six minutes from the end. SKA’s frustration with Johansson and his defense may well have played a part: the home time began taking penalties of its own, tilting the balance of play to the other end of the ice. Eventually, that pressure told – although there was some controversy surrounding the game’s only goal.

The issue was not connected with Kirill Kaprizov’s shot – a devastating one-timer off Nikita Nesterov’s feed that squeezed between Mikko Koskinen’s pad and blocker. SKA’s unhappiness came from a moment seconds earlier when Koskinen blocked another shot, only for Alexander Popov to rip the puck away from the Finnish goalie. Oleg Znarok immediately called the officials over to the SKA bench to voice his displeasure at what he felt was an unfair challenge; the referees considered the situation but chose not to refer it to the video and the goal stood.

It was enough to win the game. Johansson held firm at the other end, finishing with 29 saves. SKA, meanwhile, struggled to generate that final big chance that might have tied the scores. Datsyuk’s solo effort with three minutes to go was as good as it got for the home team.

The action returns to Moscow on Sunday, with CSKA hoping to wrap up victory in front of its own fans and reach its second Gagarin Cup Final in three seasons. SKA needs to win both remaining games in the series if it is to make it three finals in four years. And, resting in Kazan, Ak Bars watches on with interest as the battle on the Western Front draws closer to its conclusion.