The Kontinental Hockey League has joined forces with Canon and devised a new and exciting competition to reward the finest photographs taken at matches in the KHL Championship over the 10-year history of the League.

Photographers can submit their best shots in two categories – "Sport" and "Fans," while another prize, – "Audience" – will be awarded to the winner of an open vote on the website.

The submitted artwork will be evaluated not only by the country's leading sports photographers, but also by prominent figures from the world of hockey, famous sportsmen and hockey commentators:

Innokentny Pan – representative of the support program for professional photographers to Canon in Russia;

To apply, candidates need to register on the canon.khl.ru site at any time up to and including April 30, upload their entries, specifying name, description, and technical information. Each participant can submit up to 10 photos, and one photo can not be entered for a prize in more than one nomination.

The winner of the photo contest in the Sport category will become the proud owner of a Canon EOS 5D Mark IV camera and will be invited to attend the Closing Ceremony of the KHL season 2017/2018. Winners in the categories "Fans" and "Audience" will be presented with Canon lenses. 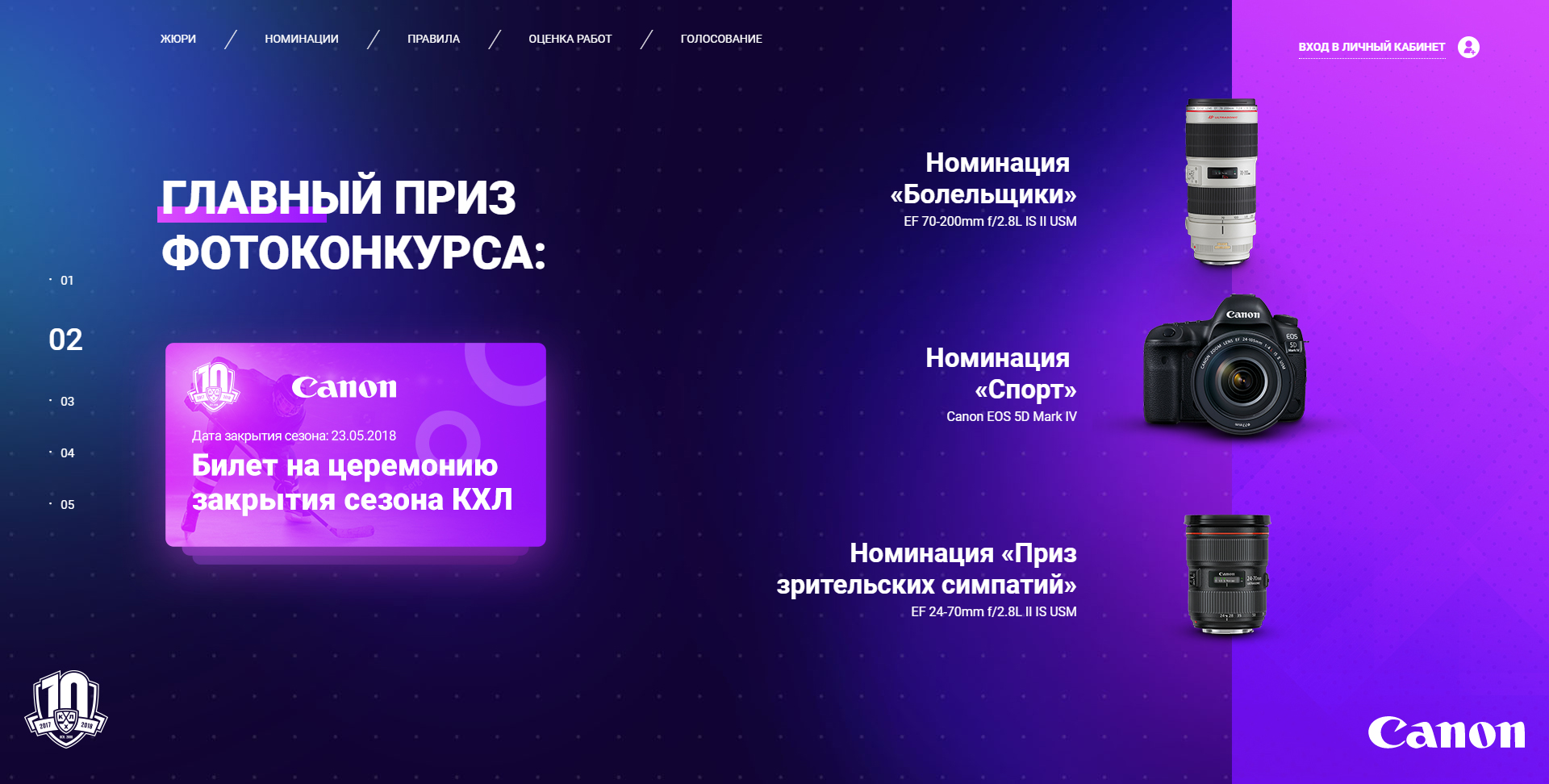 “Life flies past so fast these days, and a photo is a great memento. You look at the picture and recall all that you experienced and what your feelings were at that moment. When I look at photos of me on the ice, I often try to remember what I was thinking at that very moment. These are really action pictures. And more than just a reminder of the matches. There is a lot of emotion in action photos from matches, you always look at them and remember these moments with warmth. There are, of course, photos which remind us of our shortcomings, but without these, you could never take a step forward!

I like the bright pictures. As a member of the jury of the photo contest, I will study the emotional side more than the professional one. I will evaluate the work not from the technical viewpoint, but instead I will choose an image which is fascinating. I am especially interested in seeing what kind of pictures have been taken over the whole 10 years of the KHL, which should remind me of the guys I've played with and against, and the circumstances surrounding the picture.”

"In the photographic craft I have two idols - Vladimir Bezzubov and Yury Kuzmin. They both photograph hockey, and in my view they do this better than anyone else in the country. If you see the incredible emotions on the faces of the players or "arms entwined, legs entwined, fates entwined" in a battle for the puck.

And now it's time to put the spotlight on those who are saying,"I feel I could do this!"! "Who are they? Have you seen my work?”

We have ambition in abundance, especially out in the regions. Do you snap away for your own pleasure from sporting tournaments, or solely on the instructions of the editorial board? Do you feel undervalued? This is your big chance to get the recognition you deserve and the new equipment you need.

We know for a fact the regions are bursting with talent. Danila, the Master,was no Muscovite. So let's go!” 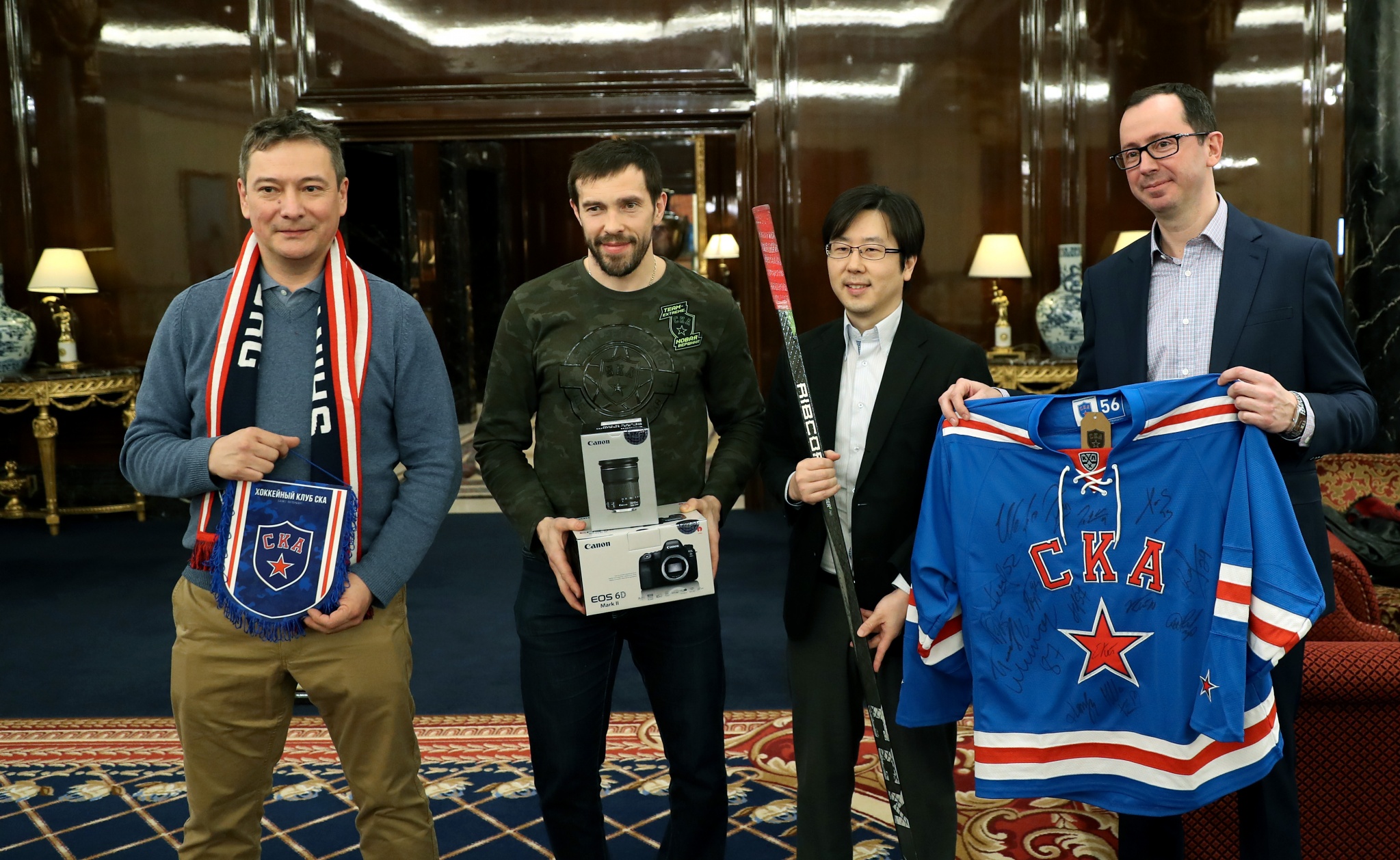 Ilya Alexeev, head of the Department of Professional Equipment at Canon Russia:

"To all fans, and to be precise, connoisseurs of sport, the associative chain CANON-Sports-Photography has always been a vital and well-established part of any sporting event. But until recently, in this field, hockey has been somewhat in the shadow of other sports, such as football, athletics, Formula 1.

And I am sincerely delighted that we at Canon Russia were among the first to understand the need to correct this, and that our colleagues from the KHL supported us. As a result of this joint effort, we saw the birth of exciting projects as, for example, our workshops for sports photographers in different cities of Russia on KHL match-days, in addition to this wonderful photography contest, which we are very happy to present before you today.

Incidentally, today I am proud to announce that our European headquarters rated this local initiative for rapprochement with hockey very highly, and as a result, for the first time in a long time, CANON will sponsor the forthcoming World Championships in Denmark!

I am sure that thanks to our competition, run in close cooperation with the KHL, the lucky winners will receive not only professional photo prizes from Canon, but also a vast audience of KHL viewers interested in and able to appreciate the wonderful work performed by these artists with a camera.

I am eagerly looking forward to the start of our competition and wish all the participants the best of luck and the most beautiful pictures!”

“I think that in recent times it has become very difficult to photograph a hockey game and get that top-class image which literally grabs the soul. A couple of years ago, I put together an album of hockey photos, incuding some from the first World Championships, when they were all still in black and white, and also from modern-day matches. And these pictures tell a great story, all moments in time! The atmosphere, the uniforms, the spectators, all in the frame. Now, in my opinion, there are fewer photographs of the kind I seek out, and I'm looking to see some captivating images among the competition entries.

Another category, "Fans," will be packed with pure emotion. If you forget for a moment what is happening on the ice, and fcus instead on the fans in the stands, you can find a lot of great images. We rarely stop to think about how the fans get ready, gather their falgs and drums... all that is fascinating!”