For Ak Bars, Metallurg and Salavat Yulaev, this is familiar territory – and a stage where victory is still expected rather than desired. For Traktor, the fourth team in the quartet, it’s an unfamiliar stage: the Chelyabinsk team has not got this far since 2013. But that doesn’t mean the underdog here lacks teeth.

Clash of the Titans - Ak Bars Kazan vs Metallurg Magnitogorsk

The rivalry between Magnitogorsk and Kazan is one of the blockbuster battles of the KHL. Both teams expect to be among the contenders for top honors, and when they meet sparks tend to fly. Their last playoff showdown came last season, and ended in a surprise 4-0 sweep for Metallurg. The surprise was not so much that Magnitka won, but that Ak Bars struggled to lay a glove on its opponent, managing just four goals in four games.

Two key figures from that series, goalie Vasily Koshechkin and forward Sergei Mozyakin, are still in place for Metallurg. But there are some significant changes in a season that has not always gone smoothly for the Steelmen. Head coach Ilya Vorobyov was replaced part way through the campaign, bringing Viktor Kozlov to the helm. And forward Danis Zaripov, whose decisive two-goal blast late in game three snatched victory from the jaws of defeat and set up Magnitka for its sweep, is now back in the colors of Ak Bars in a season disrupted by his problems with a doping controversy. Zaripov missed the first two games of post-season, and seemed to be feeling his way back to full fitness as Ak Bars accounted for Amur. However, a player with so much big-game experience is always capable of shaping a series like this. 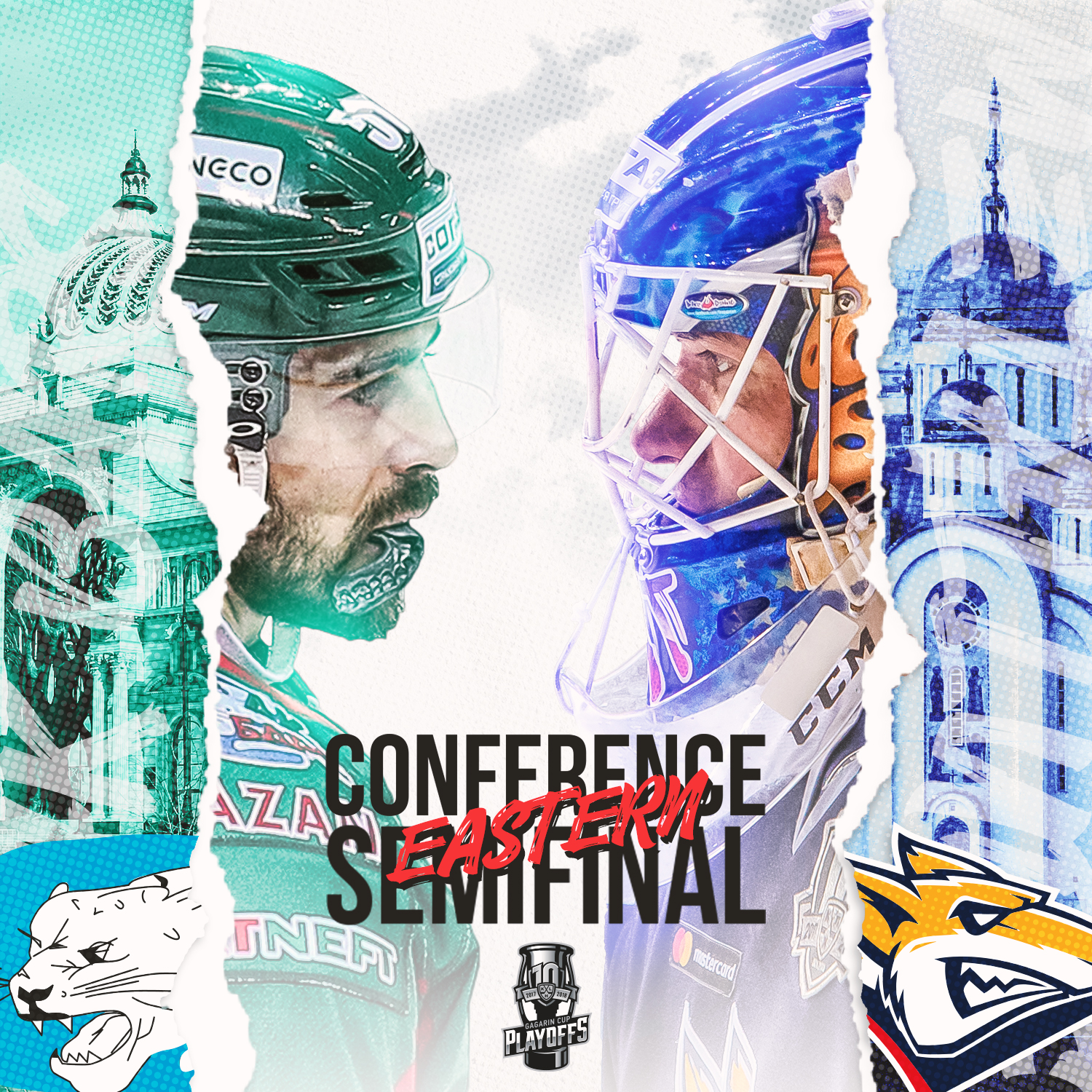 Ak Bars, top of the Eastern Conference in Regular Season, made predictably short work of Amur. Zinetula Bilyaletdinov’s team dropped just one game in overcoming the Far East team and underlined its potential to go all the way this season. Justin Azevedo, a famous thorn in Metallurg’s side when it edged Lev Prague in the 2014 Grand Final, is in fine form once again with seven (3+4) points from five games; his erstwhile Lev team-mate Jiri Sekac chipped in with six assists. Emil Garipov looks solid in goal and the Tatar team looks well-placed for further progress. 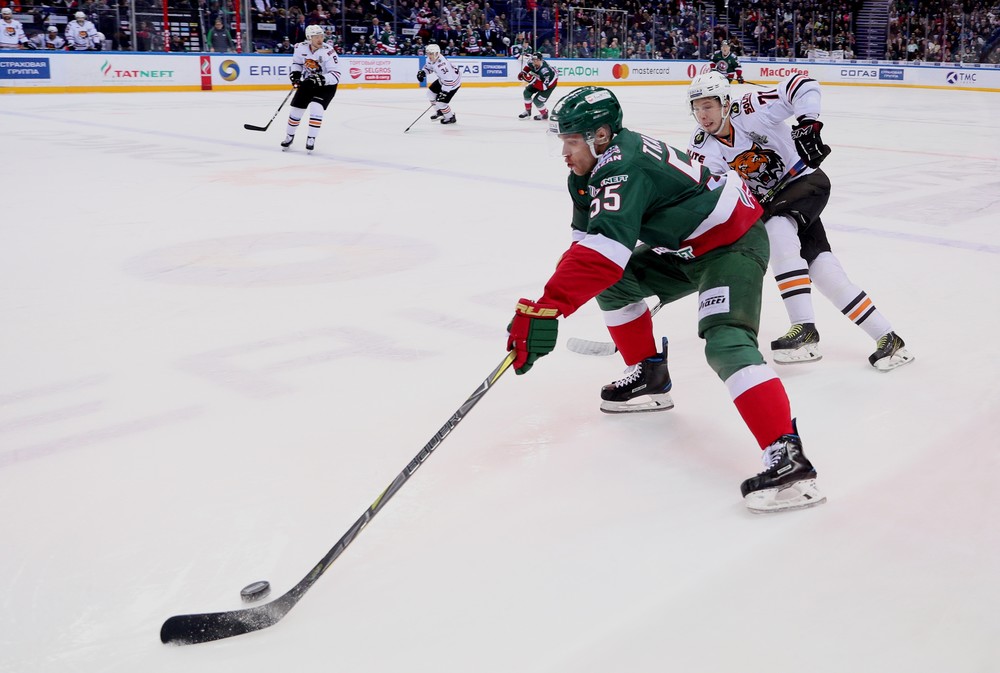 Metallurg found things a bit more tricky against Avtomobilist. It took six games to win the series, and the battles were typically tight. There were some big moments along the way, including Mozyakin’s 500th goal in domestic competition, but there’s also a sense that this Magnitka roster is merely an older version of last year’s. The sight of Mozyakin, Jan Kovar and Chris Lee at the top of the scoring charts is all-too familiar; Metallurg is relying on a proven winning formula, but might lack for a new weapon if Plan A falls short. 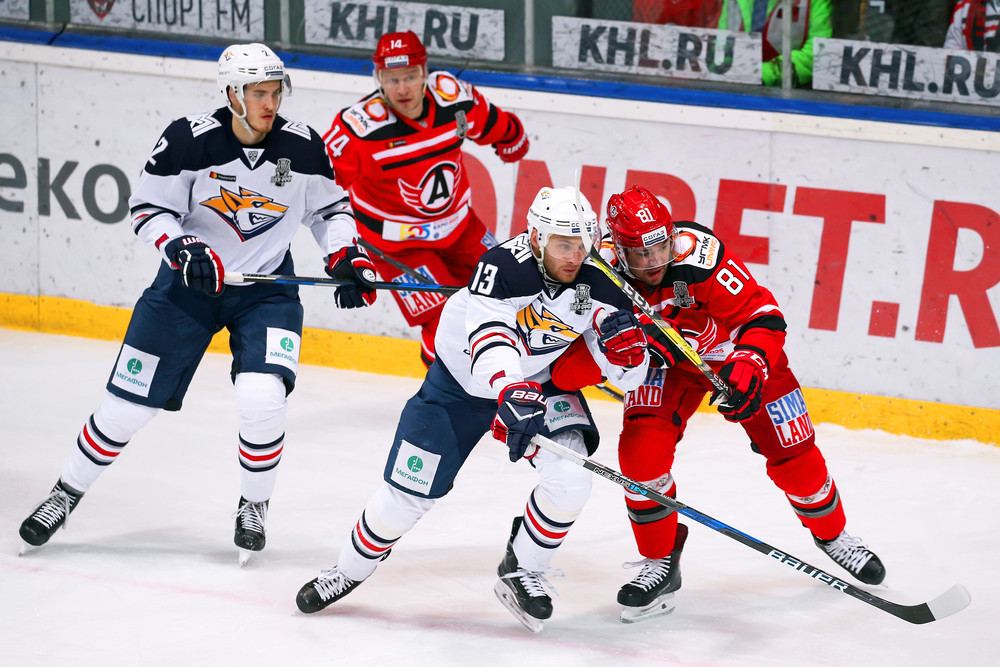 This series looks to be too close to call. These teams know each other very well, their strengths are well-documented and their weaknesses not easy to identify. Much like the Salavat Yulaev – Avangard series in round one, this could well go the distance and it would be a brave man who called a winner with much confidence. However, it’s unlikely to produce the same kind of scoring as we saw in Ufa and Omsk. These two, despite possessing some impressive firepower, are also blessed with well-organized defense and two in-form goalies. Expect tight, disciplined hockey. Expect every goal to matter. Expect a battle to the last. This could, and should, be the best match-up of the conference semi-finals. 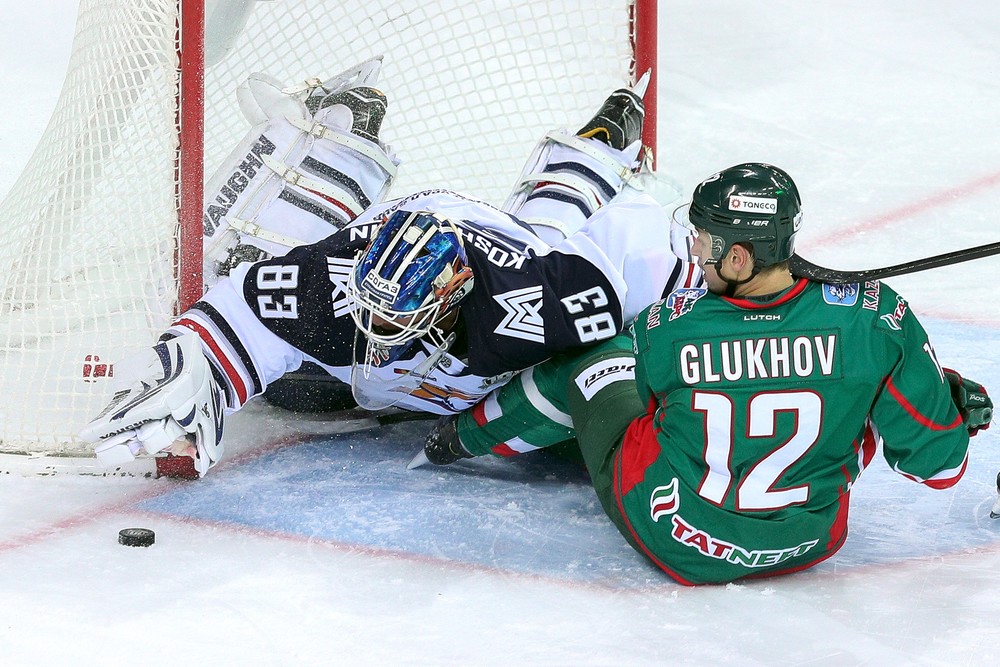 If Metallurg and Ak Bars feel like regular rivals at the top end of the table, these two lack the same history. Indeed, they’ve never met in KHL playoff action, and it’s a while since either team has come close to lifting the Gagarin Cup. Traktor’s run to the final in 2013 announced the talents of Valery Nichushkin and cemented Evgeny Kuznetsov’s rise to stardom, but the Chelyabinsk team has not hit the same heights since. Salavat won the cup in 2011, inspired by Alexander Radulov’s scoring, but since then it’s been a period of frustration for fans in Ufa.

Traktor looks to be staking heavily on youth once again, just as it did in the 2013 run. Vitaly Kravtsov, just 18, played a big role in defeating Neftekhimik; Marsel Sholokhov, 20, potted his first ever playoff goal; 22-year-old D-man Igor Isayev continues his breakout season. But there’s also experience here, with Swedish duo Richard Gynge and Linus Videll enjoying their first ever playoff series victories against Neftekhimik and Alexei Kruchinin maturing into a powerful proposition. For Salavat, Teemu Hartikainen’s five-point blast in the opening game of the playoffs highlighted what he can do; Linus Omark remains a potent threat, but head coach Erkka Westerlund has struggled to find a consistent formula this season. 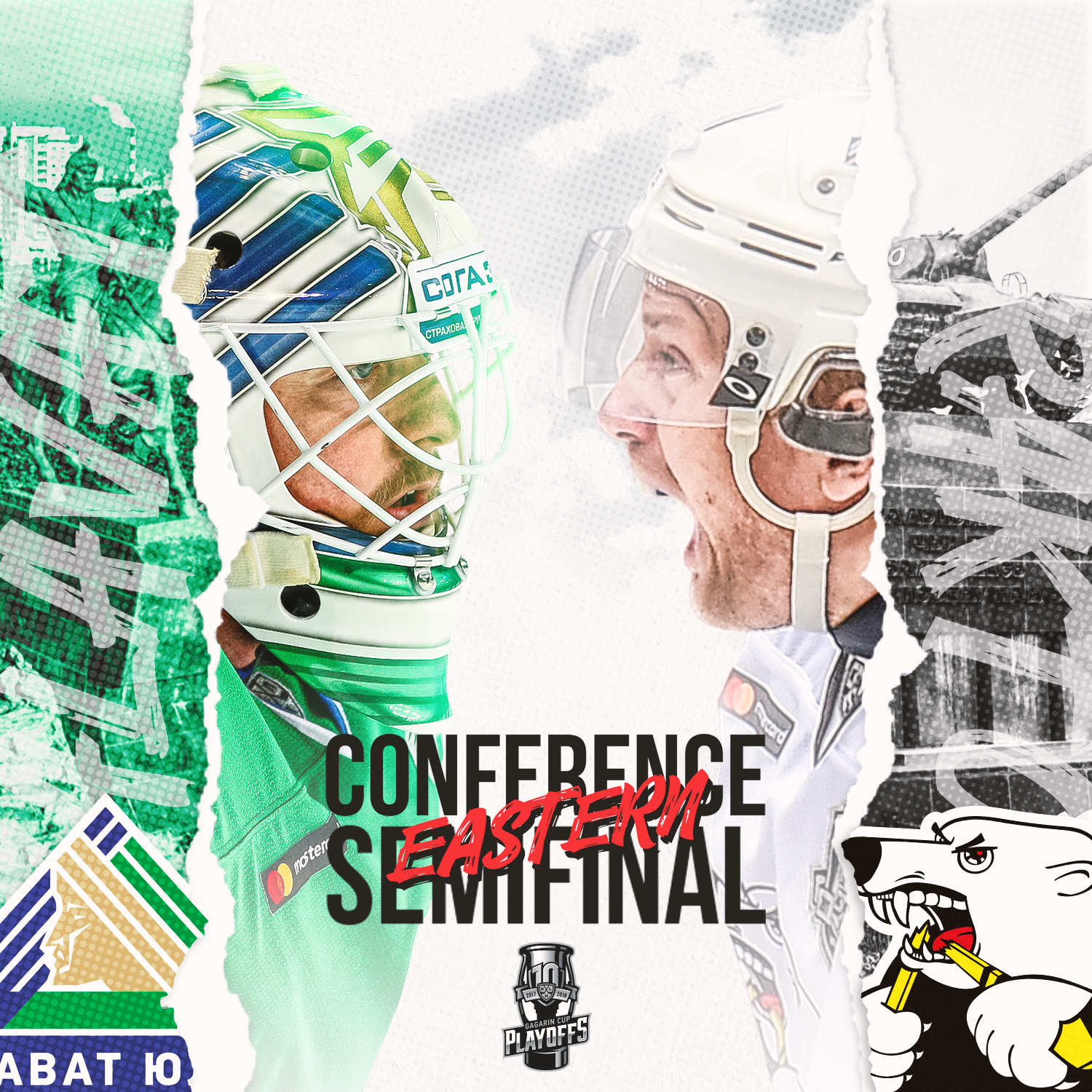 Salavat Yulaev was involved in the match-up of the opening round. Its series against Avangard was the only one that went to seven games and it took overtime for the Ufa team to prevail after a frantic finale saw Hartikainen’s late goal cancelled out by Maxim Chudinov with 13 seconds left to play. Along the way, the teams traded goals with surprising ease: this was the second highest-scoring series in KHL playoff history, with 41 goals scored in the seven games. 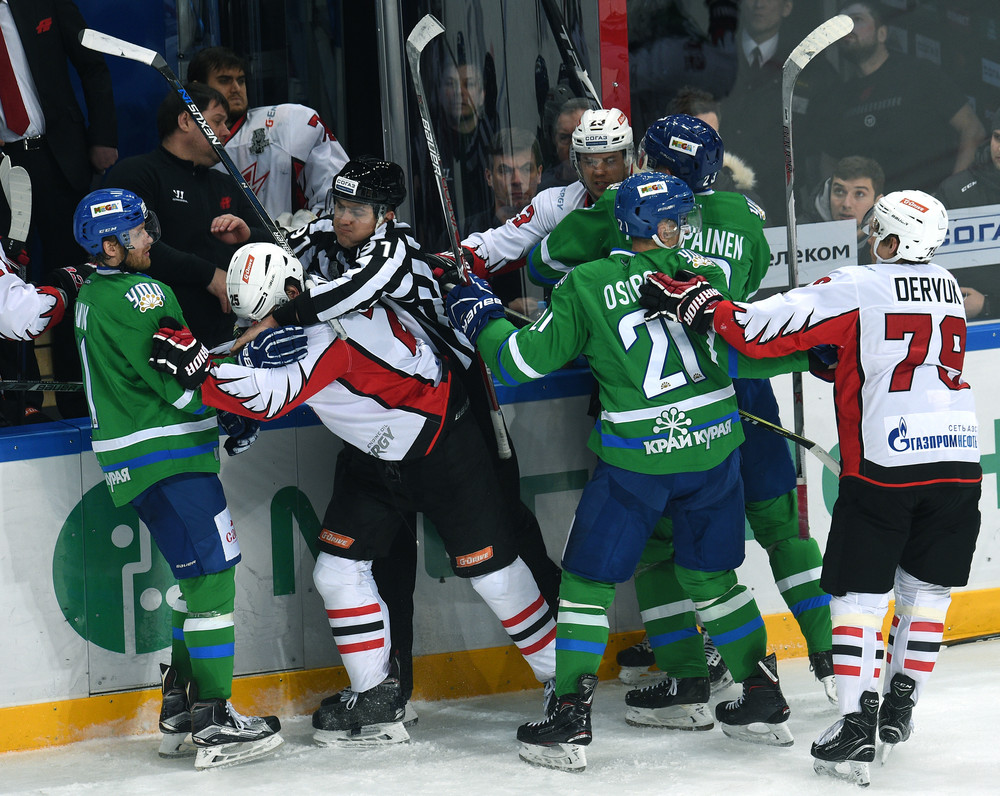 Traktor also entered the record books, contributing to the ‘dirtiest’ game in the KHL playoffs. It’s 3-2 victory over Neftekhimik in game three was distinguished by 249 minutes of penalties (most, admittedly, called against Neftekhimik). Anvar Gatiyatulin’s team shrugged off the rough stuff to secure its first series victory since 2013 by a 4-1 margin, and can point to the promising combination of Kravtsov and Kruchinin as a sign that further progress is well within reach. 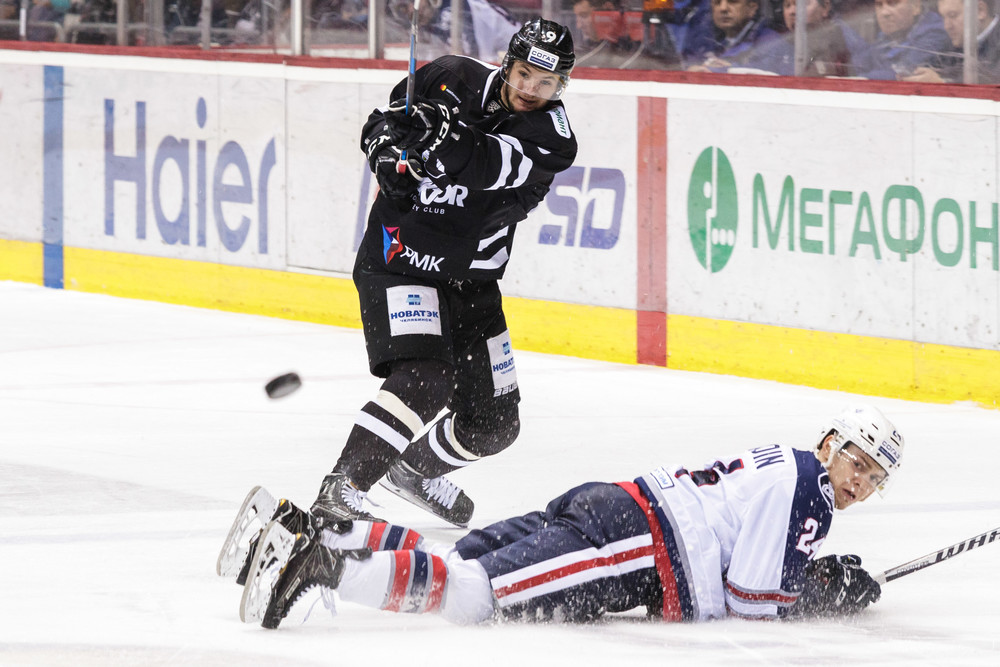 Pavel Francouz could be the difference-maker here. The Czech international had a good Olympic tournament and is enjoying some of the best form of his career. Against him, Ben Scrivens remains unpredictable – brilliant one day, uncertain the next – and the Salavat goalie stable lacks the depth supplied by Vasily Demchenko. If, as the old saying goes, defenses win championships, that could be enough to push Traktor into the Conference Final. 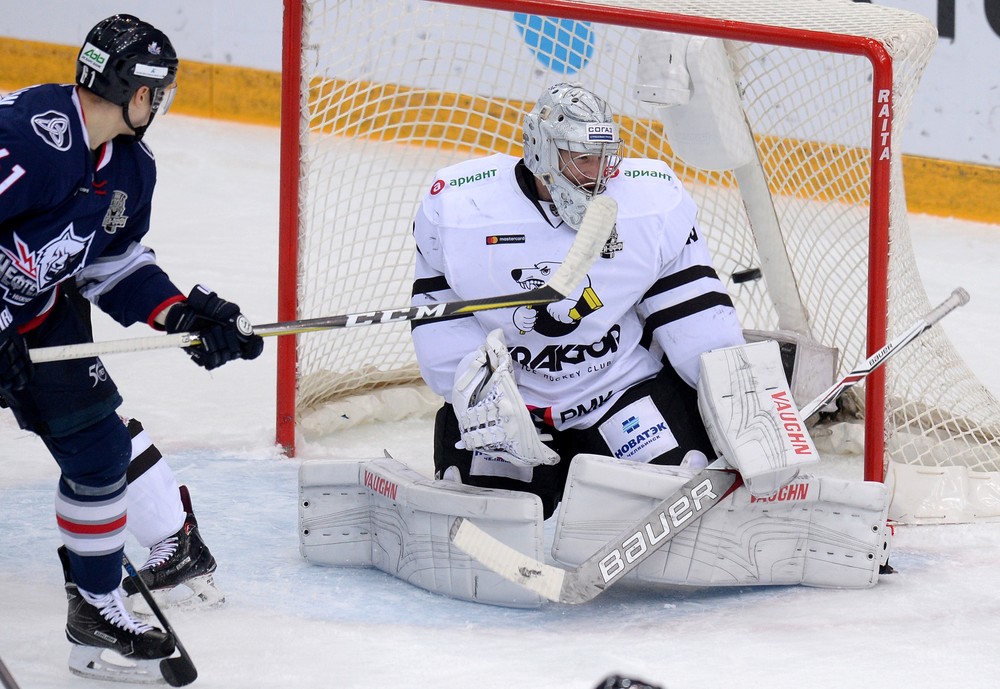 But – and it’s a big but – the combination of Omark and Hartikainen gives Salavat Yulaev an extra level of fire power. With Joonas Kemppainen centring their line – the Finn has added some handy production to his powerful physical presence in this year’s playoff – this team always has a chance of grabbing a goal. On occasion, it has the firepower to blow teams away; at other times it can seem oddly off-color. And the problem, often, is that there isn’t much from the other lines: Maxim Mayorov had one strong game against Avangard, Anton Burdasov chipped in a couple of goals but it’s hard to identify a consistent threat from the second and third lines. Against a miserly Traktor defense, adding that depth could well be key to Salavat’s potential progress. 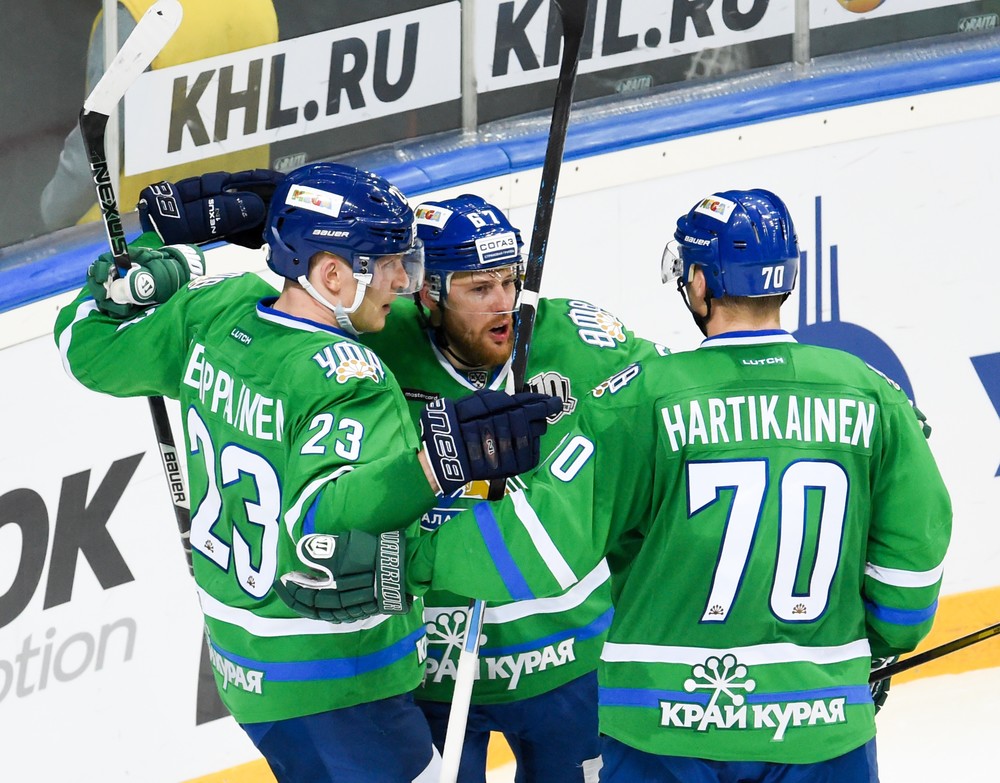