The 26-year wait is over: the Russians are Olympic champions once again.

But few could have anticipated the thrilling battle against a German team that belied its lowly reputation to push Oleg Znarok’s team all the way. Only a short-handed goal from Nikita Gusev 55 seconds from the end saved the Olympic Athletes from Russia from a sensational defeat before Kirill Kaprizov potted his fifth of the Games to claim an overtime victory.

Gusev’s strike, his second of the game, tied the scores at 3-3 at a time when it seemed that his team’s golden dream was on the verge of evaporating. Germany led on a Jonas Muller goal, Sergei Kalinin was sitting out a tripping penalty and time was running out. A desperate scrum in front of Danny aus den Birken’s net saw the puck break to the left where Gusev had drifted into space and managed to lift a backhand to the top shelf and reprieve Russia.

And Kaprizov made the most of that chance in the 70th minute when he rifled home the game-winner – off a Gusev feed dot-to-dot – and secure his place in hockey history.

“Nikita gave me a great pass, I was just lucky to get on the end of it,” smiled the 20-year-old CSKA prodigy. “But it didn’t matter who scored the goal, as long as we won.”

Gusev, with two goals and two assists, was the undoubted star for Russia. And his tying goal was a special moment for the whole team. Captain Pavel Datsyuk described the emotion on the bench as the puck broke for his SKA colleague to save the game. “When we were down 2-3 and Gusev had that shot, I think everyone’s heart stopped on the bench,” Datsyuk said. “But when the goal went in, we came back to life.”

It was a hugely tense moment: Ivan Telegin admitted he was praying for a goal as the clock ran down. 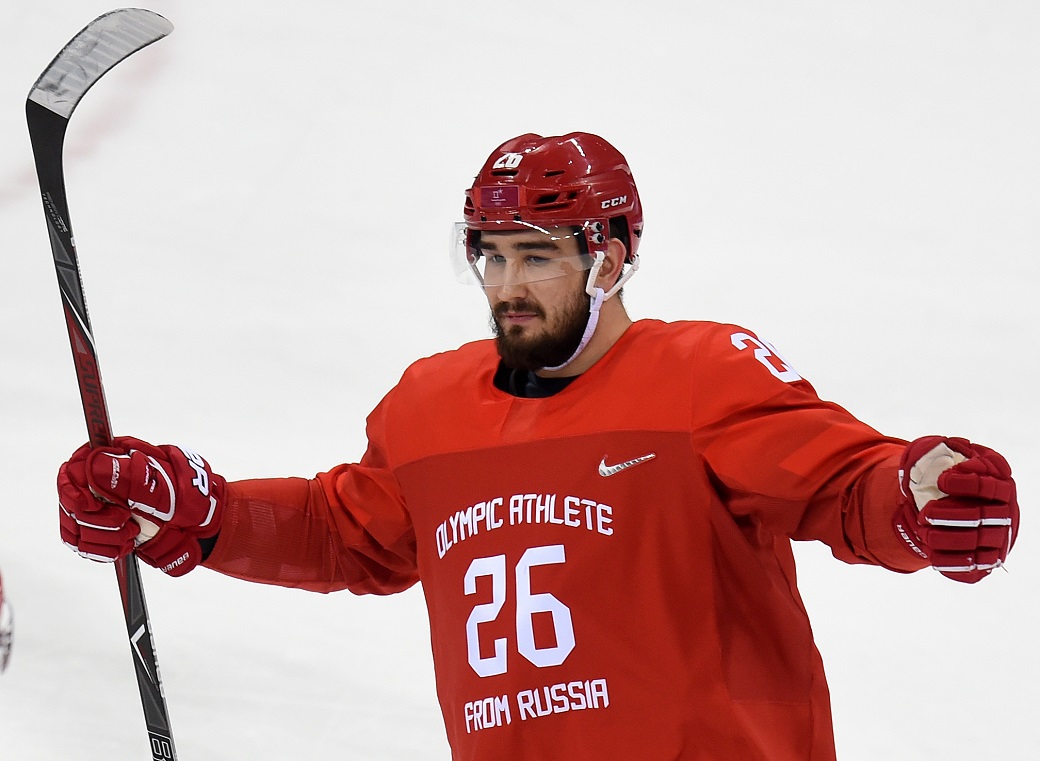 Throughout the game, a brave effort by the German underdog made life tougher than expected for Oleg Znarok’s team. A tight, scoreless first period ended with a goal in the final second from Slava Voynov – named as the best defenseman of the tournament by the IIHF directorate – but even then, Marco Sturm’s men did not crumble.

Instead Germany rallied in the second period and tied the scores when an uncharacteristic blunder from Vasily Koshechkin allowed the puck to slip under his arm after Felix Schutz tried to find Patrick Hager in the slot.

The third period followed a similar pattern. Gusev put the Russians in front in the 54th minute, slotting home a Kaprizov feed from the tightest of angles and setting the red, white and blue flags aflutter throughout the arena. But it took a matter of seconds for those cheers to die on Russian lips as Germany tied it up on the next shift when Frank Mauer’s feed found Dominik Kahun in space in front of the net and the 22-year-old smashed home his chance. Russia’s lead lasted just 10 seconds; the underdog had bitten once again. 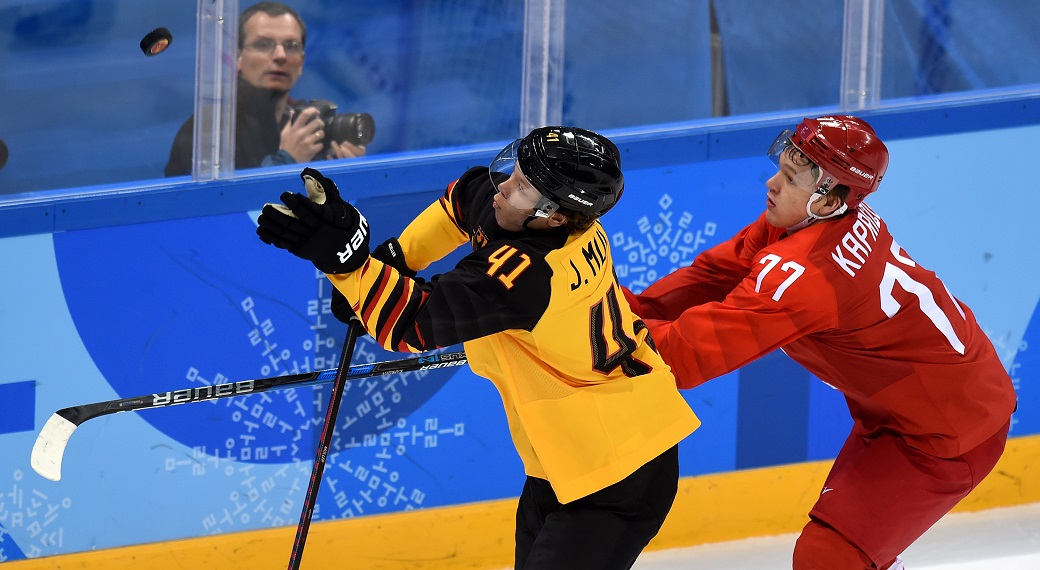 Suddenly, the balance of play tilted. Brooks Macek, scorer of Germany’s opening goal against Canada, got an odd man rush and opted to shoot himself; Koshechkin made the save. Then, disaster. German defenseman Frank Hordler broke down the left channel and sent the puck back to Yasin Ehliz at the point. He fed Jonas Muller, who deked past a sprawling Pavel Datsyuk and squeezed a low shot through Koshechkin’s five-hole.

Now, Germany just needed to hang on, and when Kalinin took a minor for tripping with 2:11 on the clock, it seemed that Russia’s wait for gold would have to go on. But then came Gusev, and another moment to cherish in the country’s illustrious Olympic history.

It was an emotional moment for Ilya Kovalchuk, who was named as the tournament MVP. But that personal accolade was less significant than achieving a lifelong dream inspired by his late father.

“I’ve been working for this since I was five years old, since I started playing hockey,” he said. “It was my dad’s great dream for me, and it’s my own dream. This medal means so much to me, it’s dedicated to my dad.”

And Datsyuk, who becomes the seventh Russian player to join the elite ‘Triple Gold Club’ of Olympic, World and Stanley Cup champions, reflected on achieving a lifetime ambition of his own at the age of 39.

“I’ve not even thought about the Triple Gold Club yet,” the SKA legend said. “But when it sinks in, I guess I’ll need a new dream to shoot for because all my dreams have come true.”

Head coach Oleg Znarok was more talkative than usual after the game. “I think that winning gold at these Olympics has answered all your questions,” he said at the post-game press conference. “That was the most important game of my life. Maybe I looked calm, but that was just a mask. I was really worried, but tried not to let the players see it.

“It’s hard to say how we made that call at the end. We had a few seconds, and we had to get it right. Luckily, we made the right choice and everything worked out.”

Russia’s roster, drawn entirely from SKA, CSKA and Metallurg, became the first in the KHL era to win Olympic medals. Moreover, the Russian players were the first active KHLers to do better than bronze at an Olympic Games, after Finland (twice) and Canada claimed bronze. 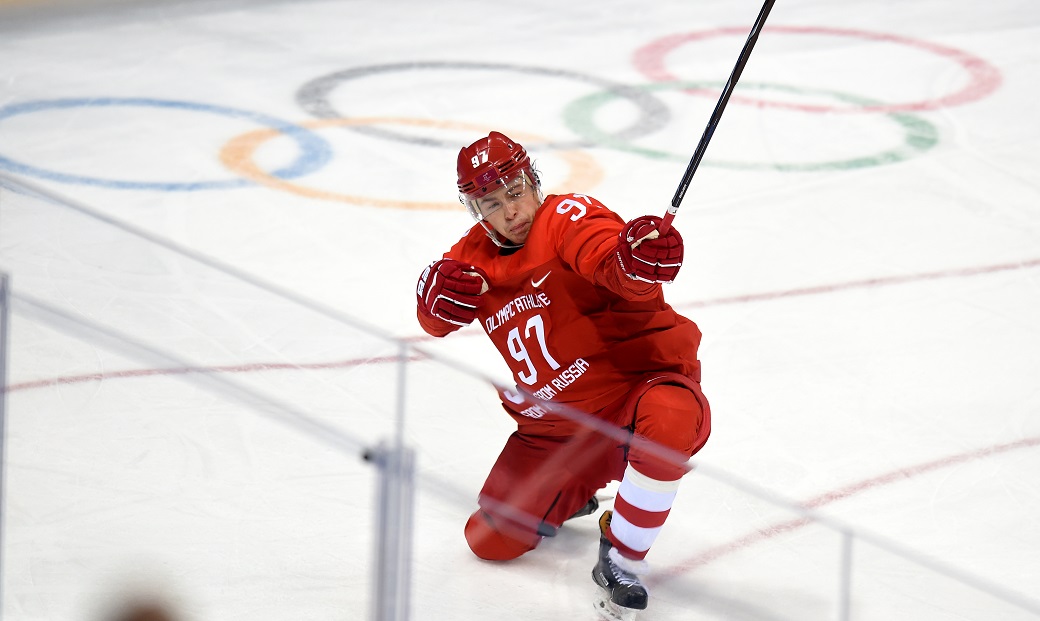