Russian cosmonauts Anton Shkaplerov and Alexander Misurkin, currently orbiting the Earth aboard the International Space Station, answered questions from KHL.ru about who they will be supporting in the upcoming playoffs, and gave us a view of two of their traveling companions - the miniature Gagarin Cup trophy and the Kontinental Hockey League puck – sent into space to commemorate the tenth season of the Championship.

It was back on December 17 of last year that a replica of the Gagarin Cup and a puck bearing the logo of the 10th season of the KHL rocketed into orbit from the famous Baikonur cosmodrome, on the mission captained by Russian cosmonaut Anton Shkaplerov. In late February, the trophy and the puck will return to Earth with Shkaplerov's compatriot and fellow cosmonaut, Alexander Misurkin, who will deliver them to the stadium for Game 1 of the Gagarin Cup final series, where the puck will be used in the ceremonial opening face-off.

Not only did the cosmonauts send photos of the mini-trophy and puck back to Earth, but they kindly found time in their busy schedule to answer questions from the KHL press service.

The timing was opportune – the day before, Anton Shkaplerov celebrated his 46th birthday. This is his third space flight, and back in 2013 he was awarded the title of Hero of the Russian Federation. We shall use this space to formally wish Anton Shkaplerov a very happy birthday on behalf of all at the Kontinental Hockey League, and we also wish him a successful mission out in space and a safe return to Earth.

- Did you get to watch the KHL All-Star Game?

Anton Shkaplerov: Unfortunately, we do not have satellite TV on this spacecraft. In fact, Alexander and I are getting ready for an eight-hour space-walk, part of which will be devoted to fine-tuning the communications between us and Mission Control. When that is done, we believe we should be able get regular broadcasts of KHL matches beamed to us up here in space.

Alexander Misurkin: I hope I will be able to return to Earth with the Gagarin Cup replica and the 10th-anniversary commemorative puck which Anton brought to the Space Station, and I look forward to sitting in the stands with the fans to watch matches in the Championship and, of course, following the All-Star Game.

- If you could name a star or planet after a great player, who would it be?

Anton Shkaplerov: After some discussion, we came to the conclusion that it has to be Valery Kharlamov. 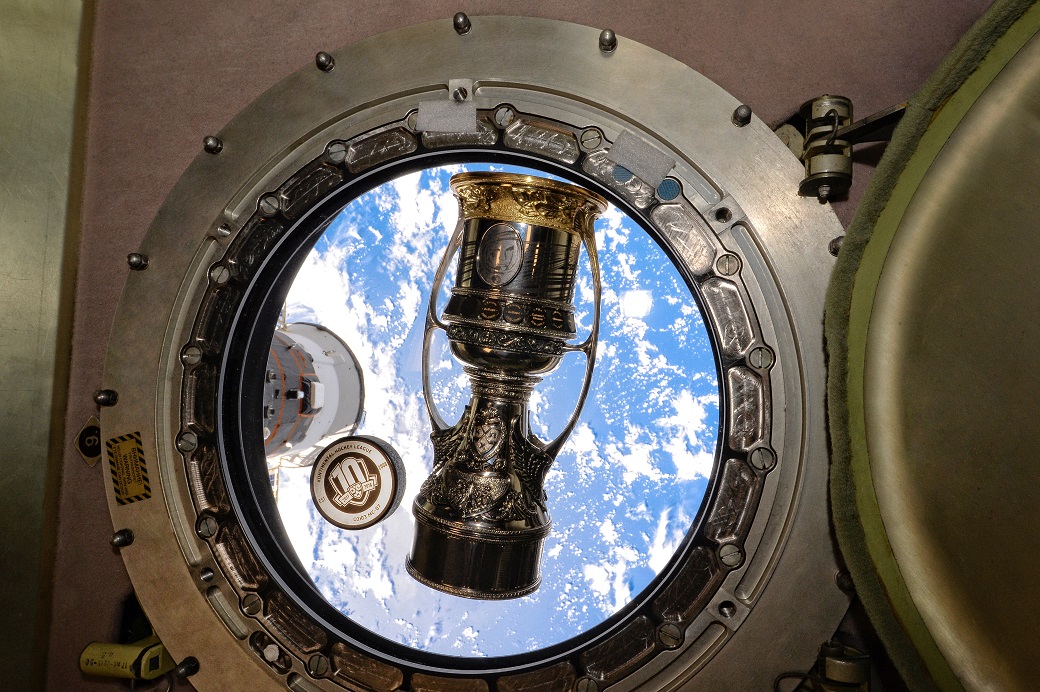 - Where do you keep the miniature Gagarin Cup and the KHL puck, and how are they faring in the journey?

Alexander Misurkin: As you can see, they are doing fine. As for where they are kept, I'll pass you over to Anton.

Anton Shkaplerov: They are here, in the Russian section of the International Space Station, given pride of place right at the very center of our command post, alongside the computers that control all the systems of the spacecraft.

- Have you managed to instill a love of ice hockey into your fellow crew member, Norishige Kanai of Japan?

- He has shown an interest, because he has found himself in orbit with a miniature Gagarin Cup trophy and a Kontinental Hockey League puck. He knows a little of the game, so we hope that when we're watching the final series games here on the International Space Station, we can explain the rules in more detail and Norishiga will soon be as passionate about the game as we are.

- Where do Alexander Misurkin's hockey allegiances lie? Who will he support in the Gagarin Cup playoffs?

Alexander Misurkin: Friends, I'll be frank with you: I just support Russian hockey, as it is the successor to Soviet hockey, and with all my soul I want every one of our hockey clubs to flourish. All the same, as an officer in the military, a pilot, I feel a close affinity with CSKA, and my heart starts to race whenever I get to see the Army Men play.

- CSKA has already secured its place in the playoffs, so who do you think will the opponent in the first round?

Anton Shkaplerov: I reckon the Army Men will play Spartak and, of course, will emerge victorious. And the final of the Gagarin Cup will be between CSKA and Ak Bars. And may the best team win!

My dear friends, it was a great pleasure answering your questions, and with all our hearts we wish continued success and good fortune for the Kontinental Hockey League. May all its clubs play more hockey, enjoy great victories, and achieve cosmic success